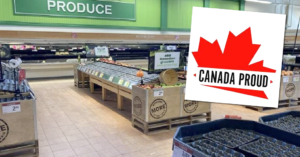 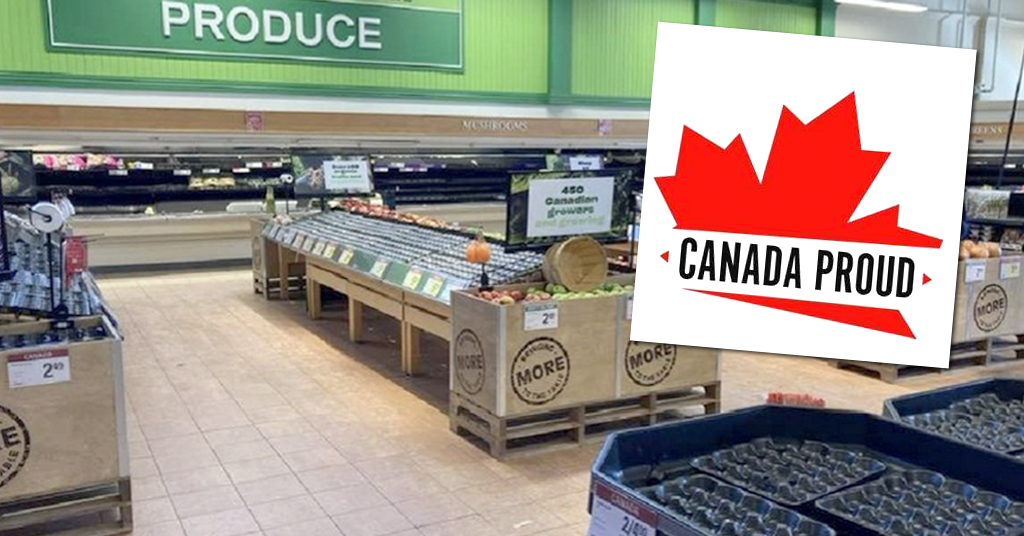 Justin Trudeau is not forcing everyone to shop at ‘Soviet grocery stores’, produce deliveries were delayed due to ‘inclement weather’

On January 17, Canada Proud posted the photo on social media along with text that states: “What Canadian grocery stores look like under Justin Trudeau.”

The photo purports to show the produce section of an Atlantic Superstore in Oromocto, New Brunswick. Most of the grocery store’s shelves and produce stands appear completely empty.

“Does this look like a Canadian grocery store to you?” Canada Proud asks its followers.

“Or does it look more like a Soviet grocery store in the 80s?” 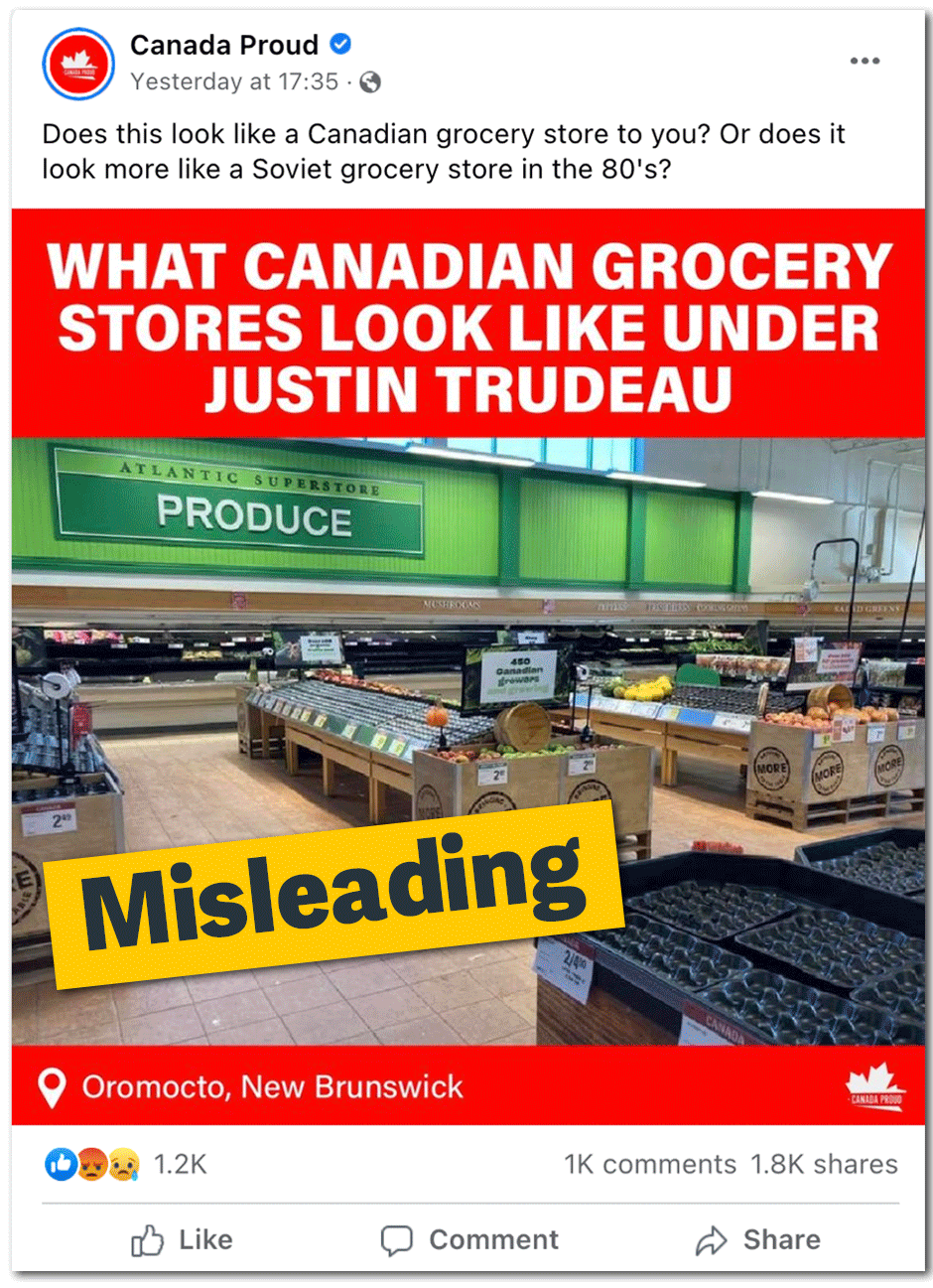 Rating: Canada Proud’s claim that the federal government is responsible for food shortages at the Atlantic Superstore in Oromocto, New Brunswick is misleading. While the photo itself is authentic, Loblaws explained that the empty produce section was the result of temporary delivery delays caused by snowy road conditions.

Canada Proud is a right-wing third party advertising group that is part of a network of “Proud” Facebook pages run primarily by Jeff Ballingall.

The page has failed multiple fact-checks, including misleading content related to the pandemic. Last year, Canada Proud falsely claimed Trudeau had encouraged Canadians to “shame” unvaccinated family members and misleadingly claimed Trudeau was choosing who would get vaccines based on “skin colour.”

The group once falsely claimed Remembrance Day ceremonies had been “banned” and misleadingly suggested “Winston Churchill” had been “removed from Google.”

Ballingall was also previously a part-owner of The Post Millennial, a right-wing news site that has previously published articles written by fake journalists using false identities with computer-generated images. Corporate records indicate Ballingall ceased holding shares in the company over the last year.

In November 2021, it was reported Ballingall was rehired by O’Toole to help the Conservatives prepare for the next election.

Local resident Mathew Richardson confirmed to PressProgress that he took the original photo while shopping at the Atlantic Superstore in Oromocto, New Brunswick on January 16 — “I did take the photo as this was the second store I entered like this,” Richardson explained to PressProgress.

Richardson posted the photo on his Facebook account on January 16 at 5:24 PM AST, expressing surprise at empty shelves at “both grocery stores in Oromocto today,” adding it was his “first time ever seeing this.”

Two hours later, a screenshot of Richardson’s post was shared by a former People’s Party candidate in Saskatchewan named Mark Friesen, who suggested the food shortage was “by design.” Friesen added: “Like all other conspiracy theories, it’s happening. But hey, don’t listen to people like me, we’re ‘nut jobs’.”

(Friesen recently spent months intubated in an ICU after testing positive for COVID-19 and being airlifted to an Ontario hospital). 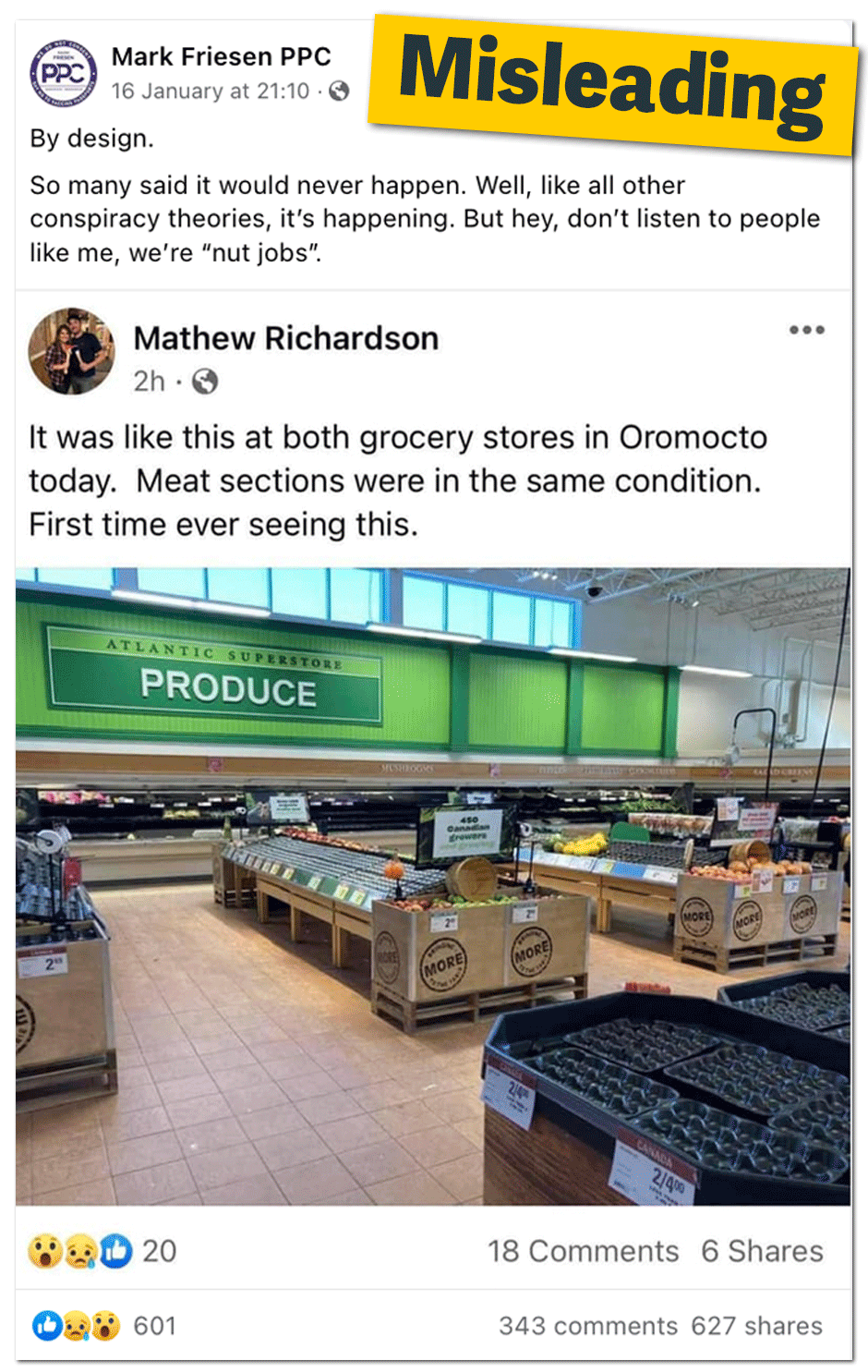 At some point between Sunday night and Monday afternoon, Richardson’s photo apparently caught the eye of Canada Proud’s content producers.

At 5:35 PM EST on January 17, Canada Proud posted a misleading meme featuring Richardson’s photo to its Facebook and Twitter accounts.

Richardson told PressProgress neither Friesen nor Canada Proud contacted him to verify details about the photo prior to reposting it: “Never spoke to either. I found it odd, but what can you do?”

While Canada Proud’s meme does indeed show the produce section of the Atlantic Superstore in Oromocto, New Brunswick, that appears to be the only thing that’s accurate about this meme.

Mark Boudreau, Director of Corporate Affairs at Loblaws, told PressProgress that the  company had briefly experienced a disruption in deliveries over the weekend due to a snow storm that hit parts of New Brunswick.

“At the time this photo was taken, the store was waiting on a few truck orders that were delayed due to road conditions,” the Loblaws spokesperson explained. “The store was restocked within hours.”

“As a large grocery chain, with multiple distribution centres in the region, our Loblaw distribution network, including relationship with multiple trucking companies, we are generally well equipped to manage storms and weather events with minimal impact on customers,” Boudreau noted.

“In this case, our shelves were restocked as soon as the delivery truck was able to drive the highway – so same day.”

“In the past 10 days, the Maritime provinces have been pummeled by four snowstorms, most recently on Monday by a messy mix of freezing rain, wind and snow. That’s led to multiple delivery trucks being taken off the road for a few days.”

On Tuesday, the Atlantic Superstore in Oromocto, New Brunswick posted an update on its Facebook page indicating it had received its delayed grocery deliveries and shared photos of bountiful produce stands stocked with bananas, mangoes, watermelons and a variety of citrus fruits. 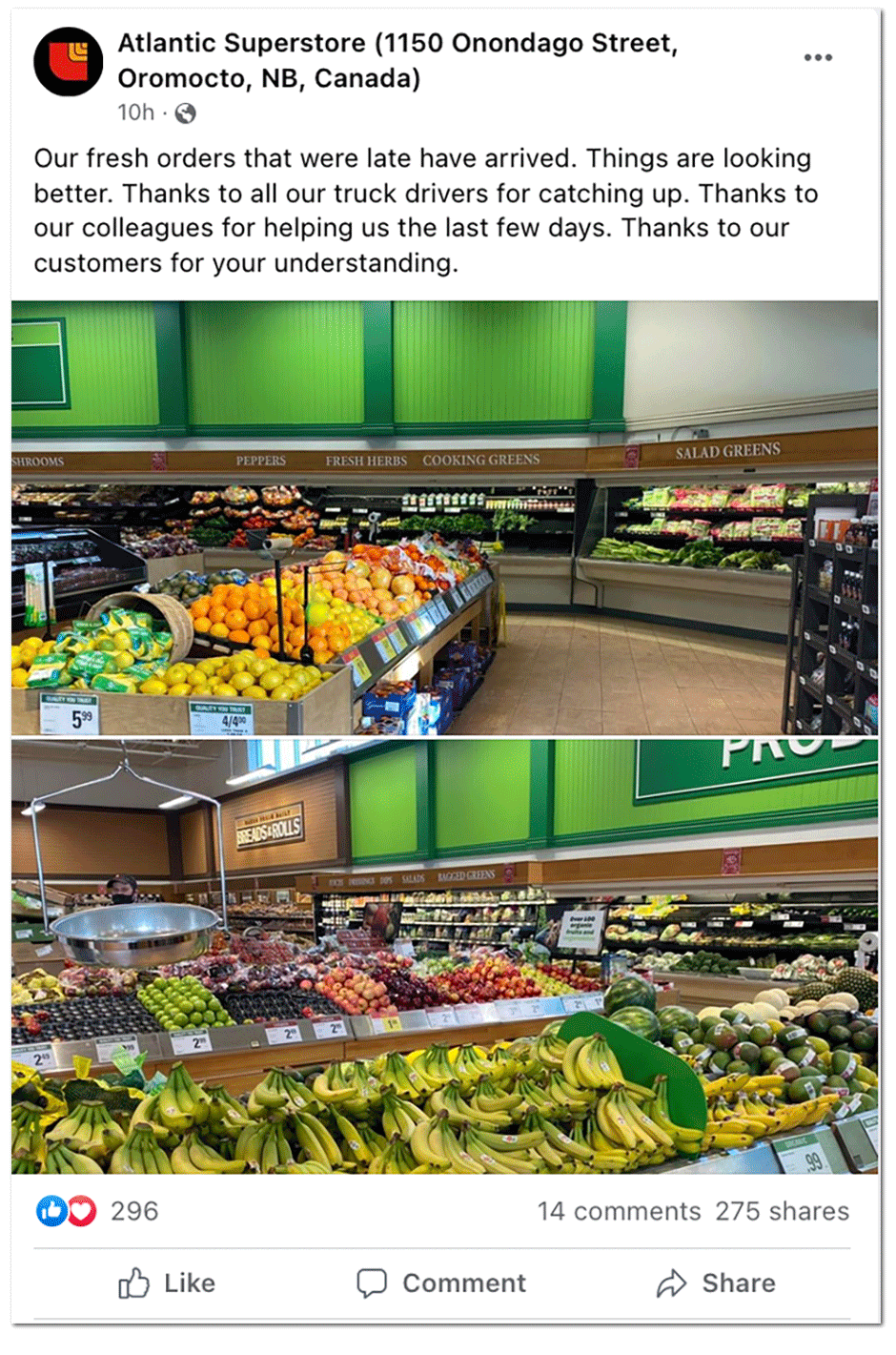 “Things are looking better,” the grocery store wrote. “Thanks to our customers for your understanding.”