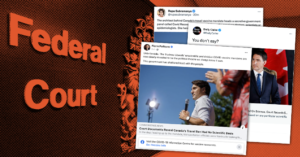 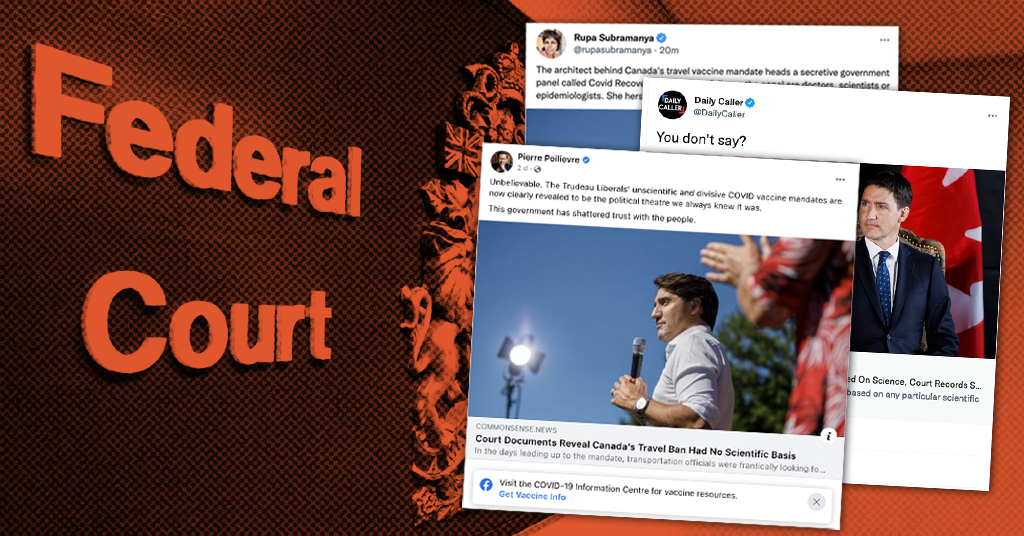 This article is more than 5 months old
Fact-Check

A National Post columnist claims newly released court documents “reveal” there was “no scientific basis” to Canada’s vaccine mandates in the transportation sector.

The legal challenge is being led by several parties, including People’s Party of Canada leader Maxime Bernier, Newfoundland’s former premier Brian Peckford (who is a pro-convoy advocate) as well as a number of other anti-vaccine mandate activists.

Among the evidence Subramanya presents to make her case for the “unscientific basis of the mandate” are short excerpts from an affidavit as well as hours of cross-examination testimony from a Transport Canada official who oversaw the implementation of the department’s vaccine mandate policy.

Subramanya alleges the documents show the public servant admitting under oath that there was no “science” involved in the development of the policy, insinuating that the entire policy was engineered to help win a “snap election.”

The blog uses out-of-context quotes and citations to advance misleading explanations for how the vaccine mandate — among the many grievances of the leaders of the 2022 convoy occupation of Ottawa — came into existence. 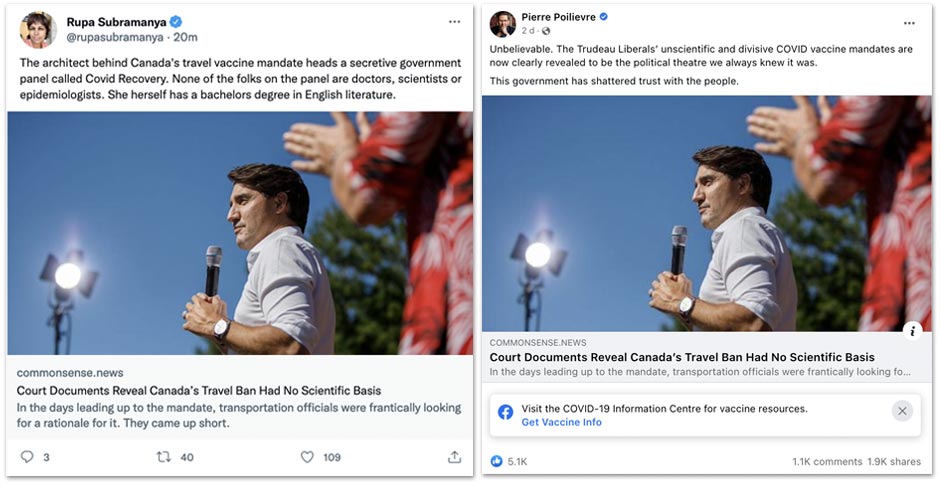 Rating: Subramanya’s claim that court documents reveal Transport Canada’s vaccine mandate policy had “no scientific basis” is misleading and contradicted by her own source documents.

Rupa Subramanya is a columnist with the National Post and a contributor to the right-wing media outlet True North.

Subramanya, who is often identified as an “economist” in media appearances and admits she is “not even a journalist,” is also affiliated with a number of right-wing, pro-business think-tanks, including the Macdonald-Laurier Institute and the Mumbai-based Observer Research Foundation.

During the convoy occupation of Ottawa, Subramanya was outspoken on Twitter and in the National Post in support of the convoy. During one press conference with convoy leaders, Subramanya compared Canada to “tinpot dictatorships.” At a fundraising gala for the Justice Centre for Constitutional Freedoms, Subramanya  was photographed warmly embracing convoy organizer Tamara Lich shortly after the right-wing charity gave Lich its annual “Freedom Award.”

Subramanya’s initial tweets were retweeted over 20,000 times and the blog post and racked up over 41,000 interactions on Facebook, largely thanks to Conservative leadership candidate Pierre Poilievre who retweeted Subramanya’s thread to his 400,000 Twitter followers (leading to an additional 2,800 retweets) and shared it with the half a million followers of his Facebook page (accounting for nearly a quarter of all interactions on Facebook).

Although Subramanya’s story was ignored by her own newspaper, the National Post, the story was  amplified by right-wing media sources in the United States and Canada, including True North, the Post Millennial, the Epoch Times, Gateway Pundit and the Daily Caller.

While the blog post is based on authentic court documents, Subramanya’s account includes significant omissions and mischaracterizes testimony from a public servant working for Transport Canada.

Subramanya did not respond to a list of questions from PressProgress highlighting inaccuracies and omissions in her reporting. Despite multiple requests for comment, including requests sent by direct message to Subramanya’s verified Twitter account, Subramanya continued tweeting misleading claims.

Here is a brief breakdown of several misleading claims and omissions:

Asked to respond to Subramanya’s central claim that its vaccine mandate policy was developed without any “scientific basis,” Transport Canada said it “relies on the public health guidance provided by federal health partners, notably the Public Health Agency of Canada (PHAC), to inform its policy work.”

Transport Canada’s statement is supported by testimony included in the same court documents that served as the primary source for Subramanya’s blog post.

The court documents show Transport Canada received multiple reports from PHAC updating the department on the latest scientific findings about about COVID-19 and the effectiveness of vaccines. They also show the public servant testifying: “I can say that throughout the pandemic decisions has been rooted in science and the evidence provided by the Public Health Agency of Canada.”

In fact, Subramanya also failed to note the Attorney General of Canada argued it was a “mischaracterization” of the public servant’s testimony to suggest that they had developed the policy without input from public health experts:

“The Applicants state that ‘neither the Public Health Agency of Canada nor Health Canada recommended making vaccines a precondition to travel’. This is a mischaracterization of Jennifer Little’s evidence … Indeed, throughout her cross-examination, she repeatedly stated that Transport Canada had discussions with, and sought advice from, PHAC to inform decision-making, including in the lead-up to the August 13, 2021 announcement, such as Exhibit ‘E’ to her affidavit, and that she was part of some but not all ‘discussions, deliberations and advice given at the very senior levels of the government in the lead-up to the (August 13, 2021) announcement’.

Similarly, a spokesperson from PHAC told PressProgress the agency has been “providing guidance to and sharing knowledge with other levels of governments and departments as needed.”

The unit, called the “COVID Recovery Team,” has “no website” and “its name appears almost nowhere in government records,” Subramanya claims.

In fact, the COVID Recovery Team is not as “secretive” as Subramanya suggests — it has a dedicated section on the website for Transport Canada’s Safety and Security Group explaining what it does and discloses their role in the “development of a federal vaccine mandate for federally regulated air, marine and rail industries.”

Transport Canada told PressProgress the unit was established in June 2021 and “acts as a focal point for the coordination of Transport Canada’s multimodal efforts to mitigate and recover from the effects of COVID-19 on the transportation network, its users and employees.”

“The extraordinary workload, and complexity and evolving nature of the COVID-19 pandemic necessitated the establishment of a team to act as a focal point for coordination, hence the creation of the CRT in June 2021,” Transport Canada’s spokesperson added. 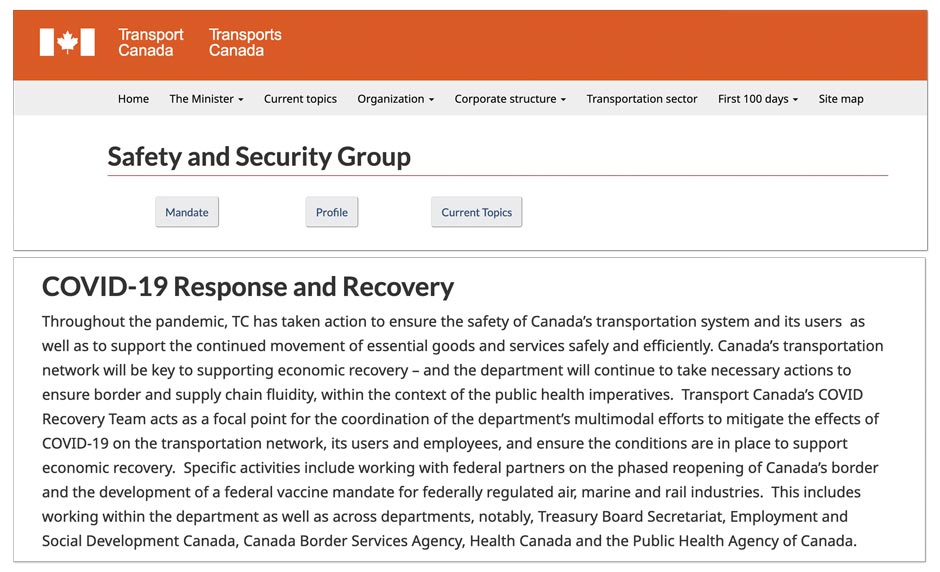 Website containing details about the COVID Recover Team, which Rupa Subramanya claimed does not exist

“No one in the COVID Recovery unit … had any formal education in epidemiology, medicine or public health”

Subramanya did not respond when asked to explain why public servants need an advanced scientific degree to develop governmental policy, although that point is moot given one of the directors of the unit did, in fact, have senior experience at the Public Health Agency of Canada.

In fact, it was never the job of Transport Canada’s COVID Recovery Team to collect and analyze scientific data on COVID-19 or vaccines. As the public servant testified in the same documents, Transport Canada received scientific information from PHAC: “I relied on the evidence provided by my public health colleagues.”

Even the applicants’ own lawyer acknowledged they had been provided with an affidavit showing an epidemiologist at PHAC shared information with Transport Canada to help them “understand the science behind COVID-19, generally, and as it specifically pertained to the transportation sector.” 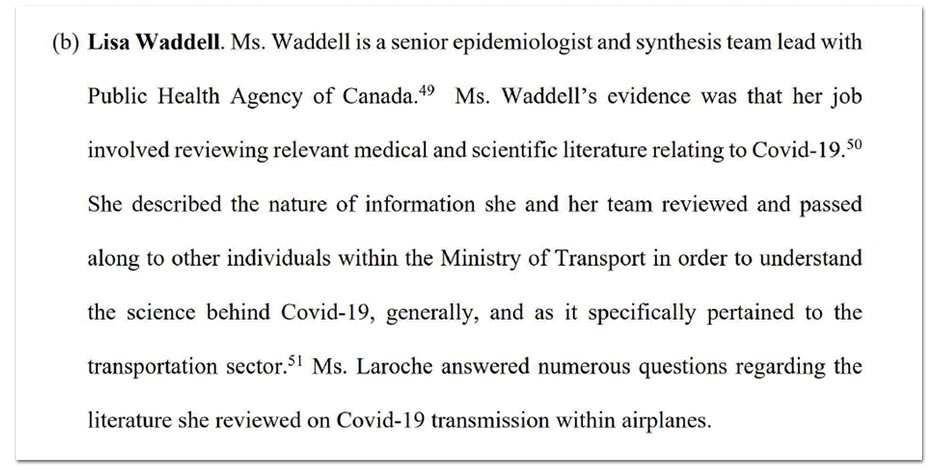 The transcript actually shows the lawyer aggressively imply the public servant made the decision to implement a vaccine mandate herself while the public servant repeatedly explains that she does not have the authority to make decisions and generally does not speak directly to the minister.

“I do not play a role in decision-making,” the public servant explains. “I provide first instance advice to my direct supervisor who’s the assistant deputy minister for safety and security. And from there, briefings would be made to the deputy minister, the minister, and subject to government decision-making through cabinet processes.”

“Decision-making would have been made at a higher level. And what I’m not privy to is necessarily all of the discussions, deliberations and advice given at the very senior levels of government.” 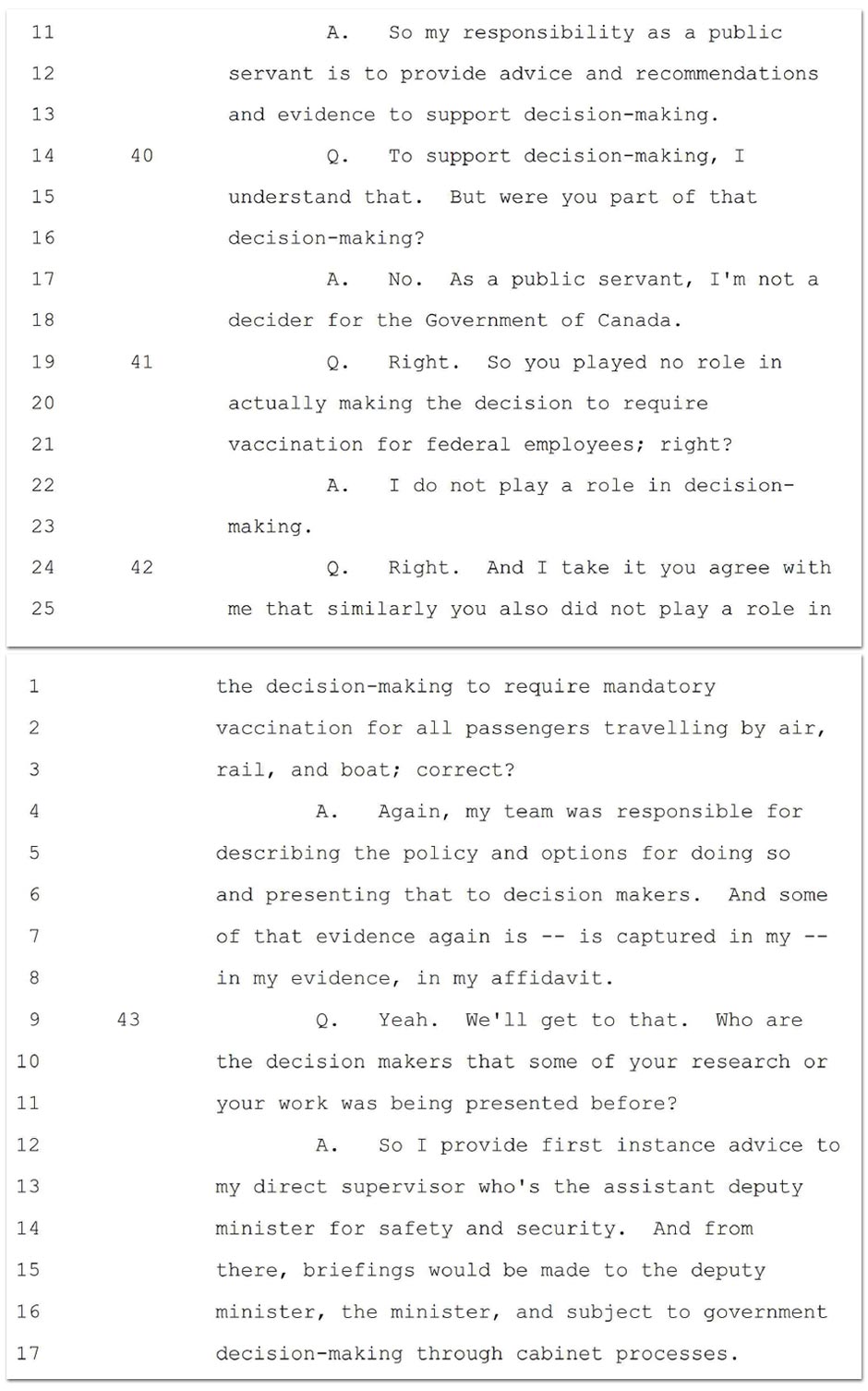 It is also alleged that the public servant said they were “not at liberty” to share certain information due to “cabinet confidence.”

Subramanya says this suggests they “could not talk about who had directed the COVID Recovery unit to impose the travel mandate because someone at the very highest levels of government was apparently behind it” — elsewhere she suggests this could include “possibly the prime minister himself.”

Except the quote in question appears to be out-of-context — the public servant said they were “not at liberty” to discuss policy “recommendations” and “options” they gave the Transport Minister – not who ordered them to “impose” a vaccine mandate. 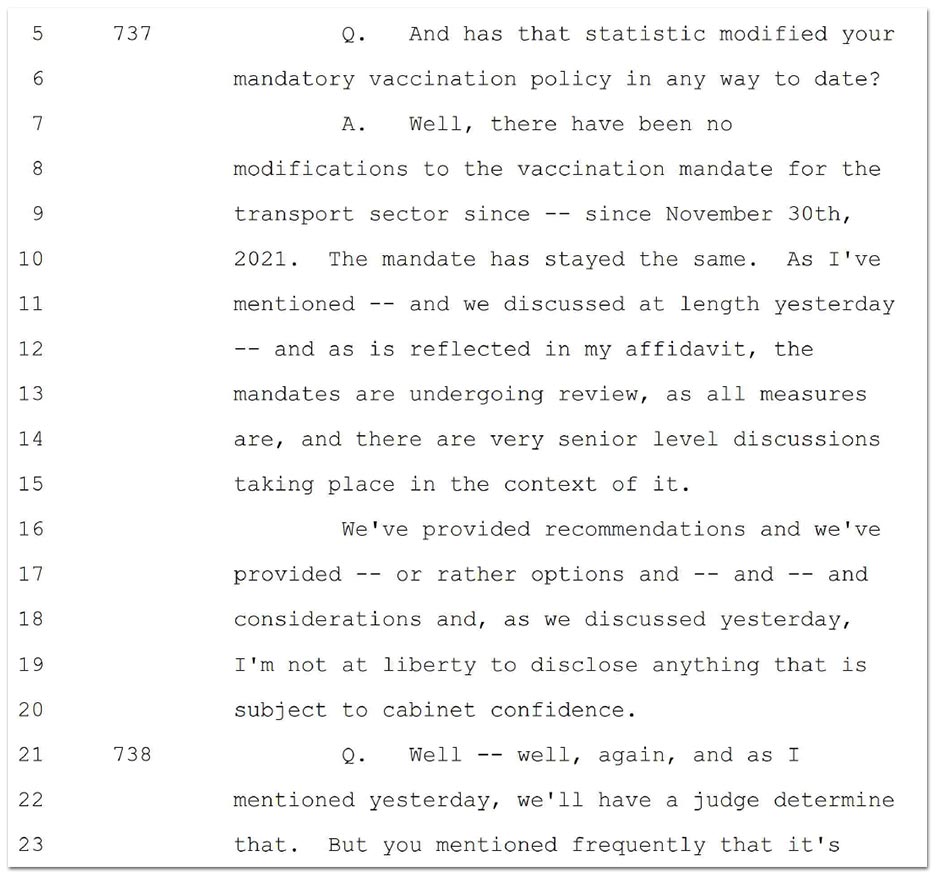 According to Subramanya, one of the affidavits included copies of emails showing public servants “casting about for a credible rationale for the travel mandate” just two days before the policy was implemented.

(These emails do not appear to be included in documents publicly released by the Federal Court of Canada. Subramanya did not respond when asked how she obtained them, including if it was given to her by one of the parties).

However, this claim also leaves out important details — the public servant’s affidavit shows Transport Canada received a number of reports from PHAC in the months leading up to the implementation of the vaccine mandate.

In their testimony, the public servant also explains the emails Subramanya portrays as “scrambling” to invent a “rationale” at the last minute was actually departmental officials seeking the most recent “updated data.” 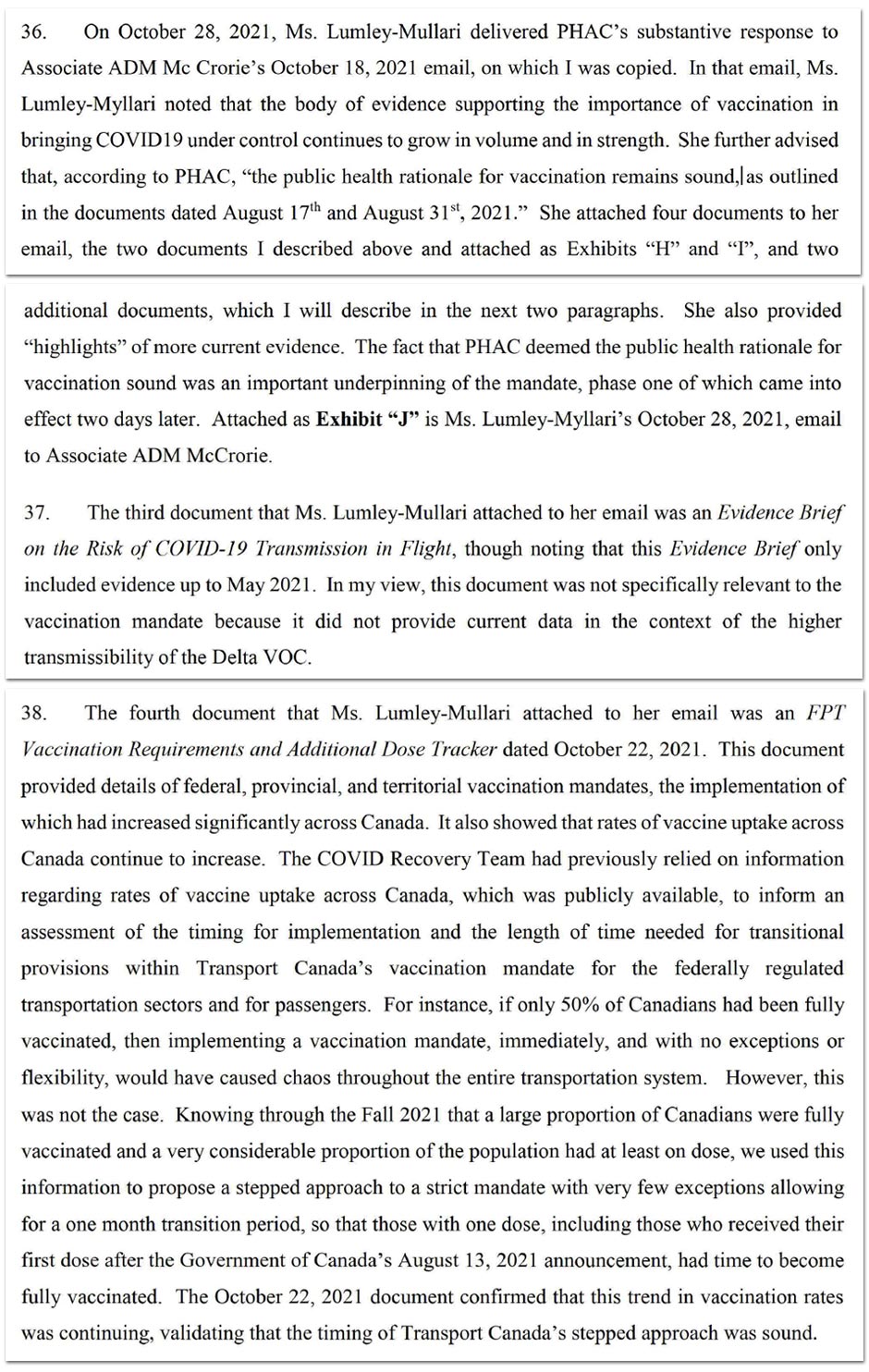 Subramanya also cites a June 2022 article in the Canadian Medical Association Journal, insinuating this research lends credence to the idea Canada had the most “draconian” COVID-19 public health restrictions in the world.

While the research does show the stringency of Canada’s public health restrictions were second-highest on a list of countries researchers looked at, it also found the length of time Canada had its highest level of restrictions in place ranked it “middle of the group.”

Also omitted is any mention of numerous data points highlighting the benefits of those public health restrictions in reducing deaths or COVID-19 infections.

Dr. Fahad Razak, the lead author of the article, said the way his research was presented in Subramanya’s blog post mischaracterizes his findings.

“Obviously our work itself was cited out-of-context in this piece,” Dr. Razak told PressProgress, adding that the “data around vaccine mandates resulting in increased vaccination is pretty clear.”