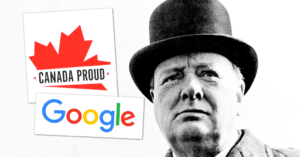 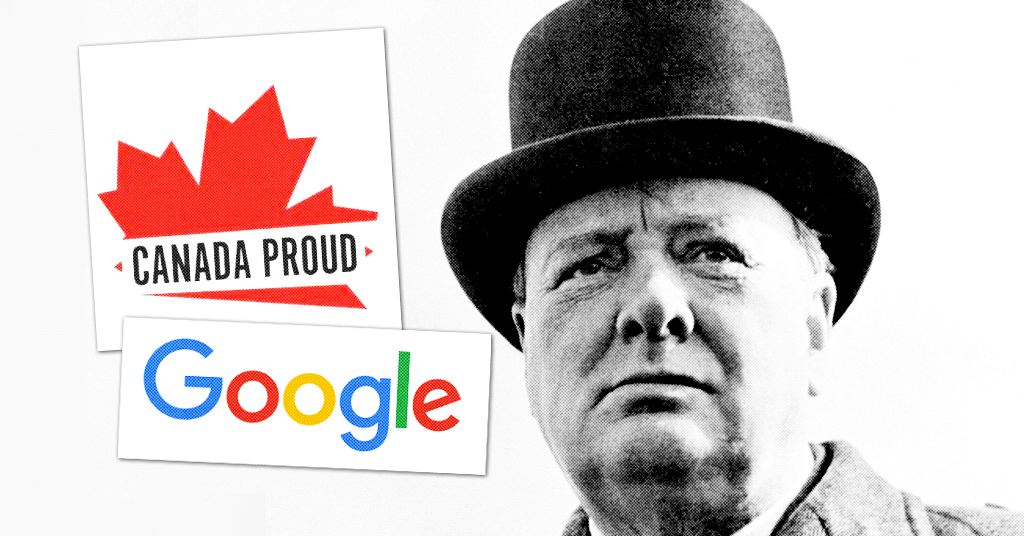 Was British Prime Minister Winston Churchill ‘removed’ from Google in an effort to ‘erase and rewrite history‘?

The meme shows an image of Churchill with text that reads: “1945: victory over Hitler.” Below is an image of a Google search result showing Churchill’s photo missing from a list of “British Prime Ministers” alongside text that states: “2020: Removed from Google.”

In a caption on the Facebook post, Canada Proud adds: “Communist governments erase and rewrite history. Free countries reflect upon and learn from theirs.” 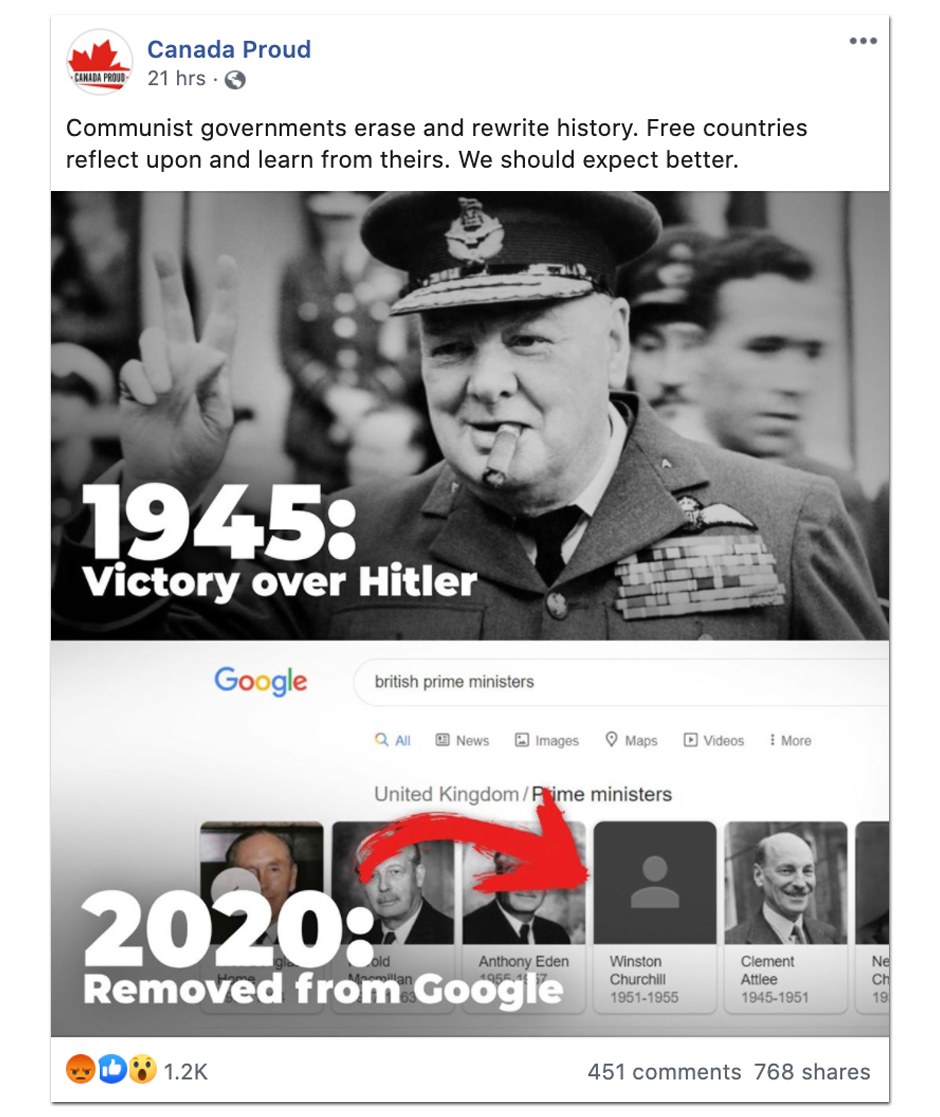 Rating: Canada Proud’s claim is misleading — although it does reference an event that was reported by news organizations, it omits relevant context that invites social media users to form false conclusions.

Ballingall is a former Conservative staffer, Sun News Network employee as well as a Bay Street lobbyist who currently serves as digital director for Erin O’Toole’s campaign for leader of the Conservative Party of Canada.

Canada Proud’s board of directors includes Ballingall, Ryan O’Connor, Mary Sloan, Nicholas Spoke and Matthew Burns. Election filings show the group has been funded with big donations from wealthy interests who have lobbied governments for private healthcare contracts and to allow more foreign steel into Canada.

The backstory: The Daily Mail, a right-wing British tabloid, reported this week  that Churchill’s photo “mysteriously disappeared from Google’s list of British prime ministers,” coinciding with “protesters calling for his statue to be torn down.”

Google later clarified that the photo was briefly unavailable due to a technical glitch caused as by switching Churchill’s photo from one of the former Prime Minister as a youth to a more recognizable photo of Churchill as an older man.

“The systems had selected a picture of a young Winston Churchill, while he’s more famously and iconically pictured when older,” Google later told The Sun.

At the end of April, we received feedback that the image of Churchill automatically selected by our systems wasn’t representative of him. The systems had selected a picture of a younger Winston Churchill (shown below), while he’s more famously & iconically pictured when older… pic.twitter.com/eqEirPH6TV

“Following our standard procedures, human reviewers processed the feedback, determined that the image displayed wasn’t the most representative of Churchill, and we blocked the unrepresentative image to allow the systems to automatically select a different one.”

“In this case, an error in our systems prevented a new, more representative image from being selected.”

Google repeated the explanation that it offered to British tabloids in a statement to PressProgress.

Despite Google’s explanation, the conspiracy was amplified by right-wing groups, including Leave.EU, one of the campaign groups behind Brexit:

Why has US tech giant Google deleted the photo of Winston Churchill from their list of British PMs? It’s clear there’s a coordinated campaign to undermine one of our great national heroes – what on earth is going on? @realDonaldTrump

It is unclear where the Churchill-Google conspiracy ultimately originated, however, a Twitter user with 10 followers named “madbikertony” tweeted about Churchill’s missing photo two full days before it hit the British press, tagging media outlets and right-wing figures like Nigel Farage and Donald Trump.

@RT_com @realDonaldTrump @TheEconomist @FinancialTimes where will the censorship end? Winston churchill is now being censored on Google. Search UK prime ministers and he is the only picture ‘missing’ #worldsgonemad pic.twitter.com/NiUnDa2vsK

The reality: Although a photo of Churchill was, in fact, temporarily unavailable on a list of British Prime Ministers, it is misleading to suggest Churchill was “removed from Google” or to liken it to communist efforts to “erase and rewrite history.”

For one thing, as Canada Proud’s own meme shows, Churchill’s name still appeared on the list of British Prime Ministers. Anyone who clicked Churchill’s name would be able to access additional historical information and photos about Churchill.

In fact, an official Google account that shares “insights on how Google search works” later explained that while Churchill’s image was temporarily missing from the search engine’s Knowledge Graph, “many images of Churchill are easily found through both web and image searching on Google.”

If a Knowledge Graph image is missing due to an update, the subject will be named but lack an image in anything automatically generated from the Knowledge Graph. This is why Churchill’s image (but not his name) is missing from some lists. It is temporary & will be resolved….

The timing of Canada Proud’s meme could invite users to draw a false connection between Google’s glitch and recent anti-racist protests that have targeted symbols like Churchill’s statue, along with other statues of several other historical leaders associated with white supremacy and slave trading.

The anti-racist protests have themselves been targeted by British conservatives and their far-right cousins — a mob of drunken far-right hooligans recently gathered at Churchill’s statue in London and provoked violent clashes with police.