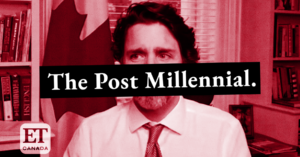 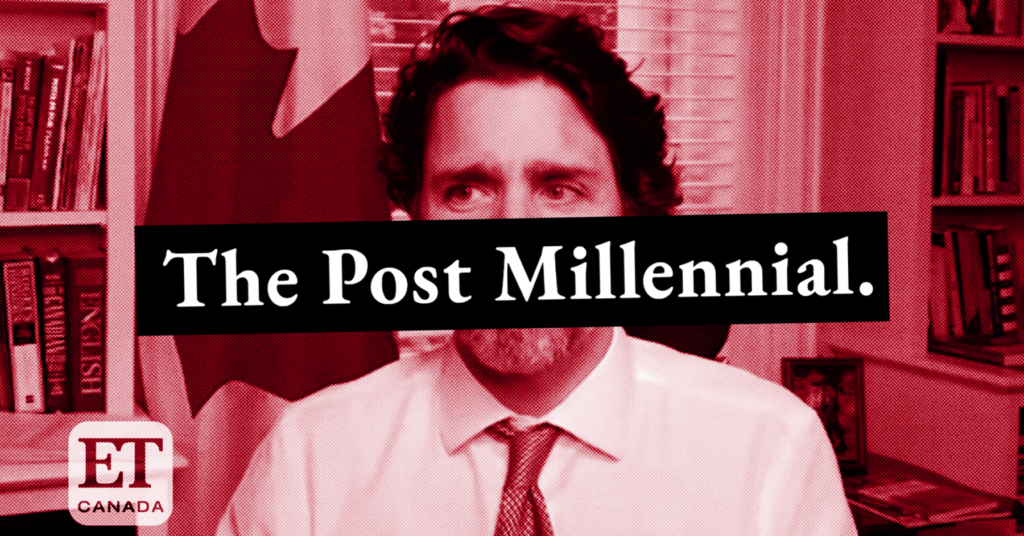 No, Justin Trudeau Did Not Tell Entertainment Tonight that Canadians Should ‘Shame’ Family Members Into Getting Vaccines

According to a recent tweet from an editor at the right-wing Post Millennial website, Trudeau encouraged the nation to “shame their crusty uncle who resists” getting COVID-19 vaccines.

The tweet from the Post Millennial’s Roberto Wakerell-Cruz, which was later boosted by the right-wing group Canada Proud, also zeroed in on Trudeau’s feelings of “euphoria” after getting his vaccine shot.

Wakerell-Cruz ended his tweet by calling Trudeau a “lunatic.”

Rating: Wakerell-Cruz’s claim that Trudeau told Canadians they should “shame” crusty uncles into getting vaccinated is not an accurate representation of what the prime minister said.

While Trudeau did suggest encouraging friends and family, including a “crusty old uncle,” to get vaccinated, the Post Millennial editor provided a misleading description of the statements contained in an accompanying video clip.

About the Source: The Post Millennial is a right-wing website co-owned by Canada Proud’s Jeff Ballingall and Matthew Azrieli, the grandson of a billionaire Montreal developer. Until last year, a company that lists Matthew’s mother as its only director was named as one of The Post Millennial’s shareholders.

The Post Millennial has lately turned some of its attention to a larger American audience by focusing on far-right culture war content. One of The Post Millennial’s editors-at-large is Andy Ngo, an American commentator who gained notoriety over his coverage of a far-right Proud Boys rally in Portland, Oregon.

How it Spread: In less than 12 hours, the tweet picked up around 3,000 interactions, including a retweet by Canada Proud — an account with over 20,000 followers.

Wakerell-Cruz also wrote an article about the clip for the Post Millennial website, which ran with the headline “Trudeau describes ‘amazing feeling’ of getting vaccine, urges pressuring ‘your crusty uncle who resists’ vaccination.” 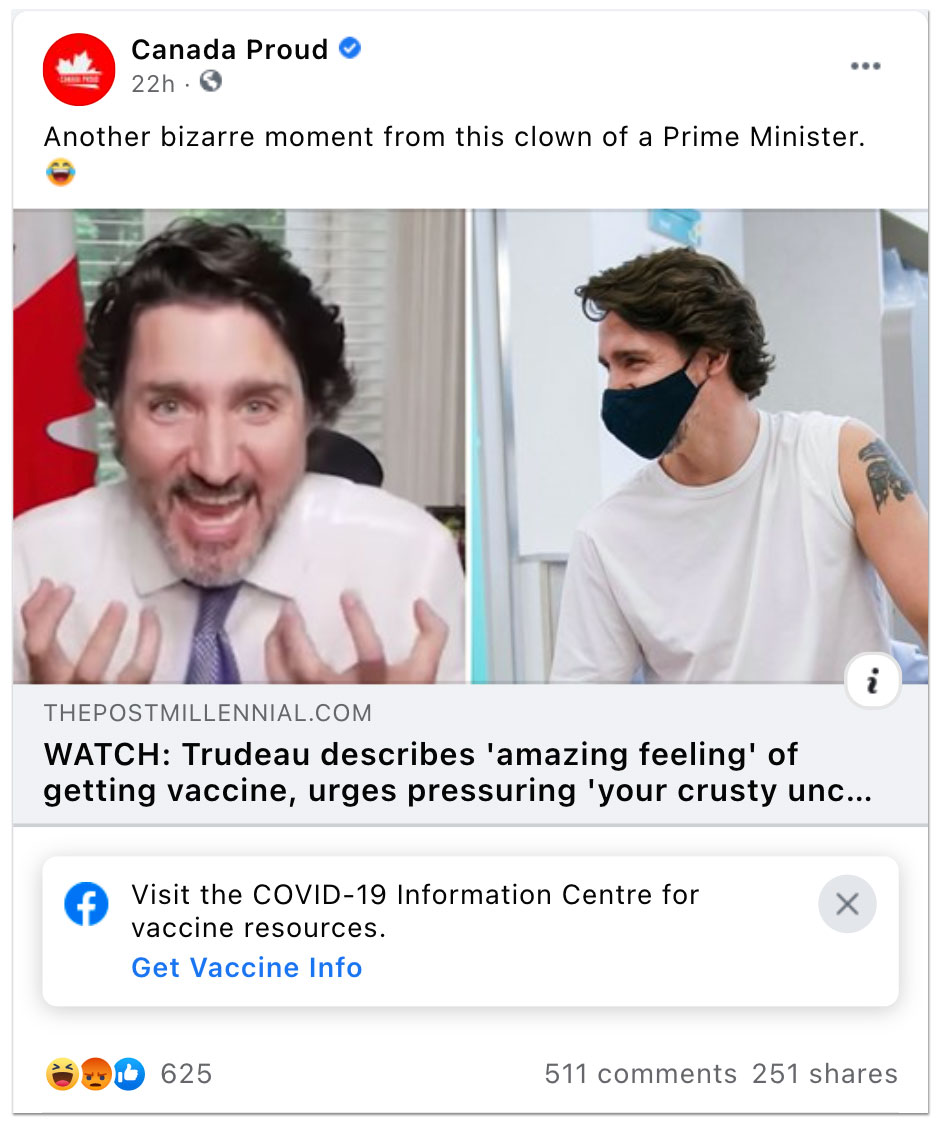 The Reality: The prime minister did, in fact, talk to ET Canada’s Sangita Patel about encouraging vaccine-hesitant relatives and friends to get vaccinated, but he did not suggest Canadians should “shame” anyone.

In the original clip, Trudeau talks about the importance of getting the vast majority of the population vaccinated, and the potential that Canadians could return to normal shortly afterwards:

“…Each of us doing our part is getting through this, because we don’t get through this unless the vast majority of the population gets that first shot and then a few months later gets that second shot. That’s how we get through it and it’s something that everyone can do and we’re just seeing Canadians come out in such strong numbers all across the country to say: ‘Yeah, I want this covid thing to end, I want to get back to normal’. And the way to do that is to make sure that everyone, even that crusty old uncle who resists, or that friend who’s skeptical, encourage them, convince them, tell them that they need to get vaccinated because this is how we get through it.”

Even the Post Millennial itself appears to concede that it is not accurate to suggest Trudeau was calling on Canadians to “shame” family members, as Wakerell-Cruz claimed.

Wakerell-Cruz’s article was first published under the headline:

That headline was later quietly changed to replace the word “shaming” with “pressuring” — although the Post Millennial included no correction note acknowledging the change.

Two headlines that ran on the same Post Millennial story

While Canada Proud has previously pushed misleading statements about vaccines and The Post Millennial has been a key promoter of anti-lockdown protests, neither group is explicitly anti-vaccine.

However, Wakerell-Cruz’s misleading claim does reinforce conspiratorial narratives pushed by anti-vaccine activists about governments coercing or forcing their populations into receiving the shot for nefarious reasons.

The Post Millenial’s comment sections illustrates how this message was received by a few of the website’s anti-vaccine followers. 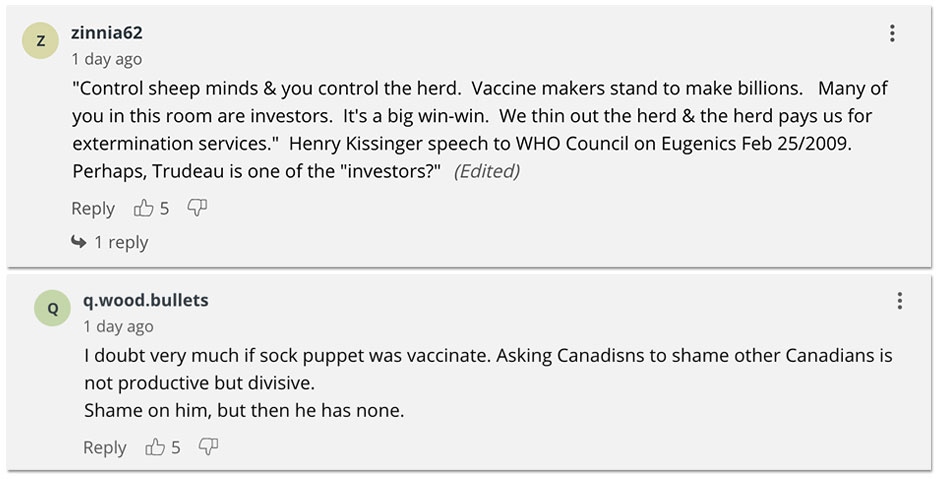 In response to Wakerell-Cruz’s original tweet, one twitter user claimed: “It’s an EXPERIMENT! Try to convince me when It’s not and I’ll still say NO!”

Others alluded to the “Great Reset” conspiracy theory, which claims world leaders deliberately engineered the COVID-19 pandemic in order to impose socialism. “I trust Trudeau and his great reset as far as I can throw my car,” one user wrote.