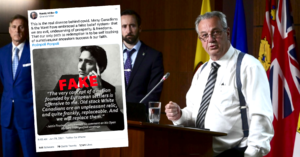 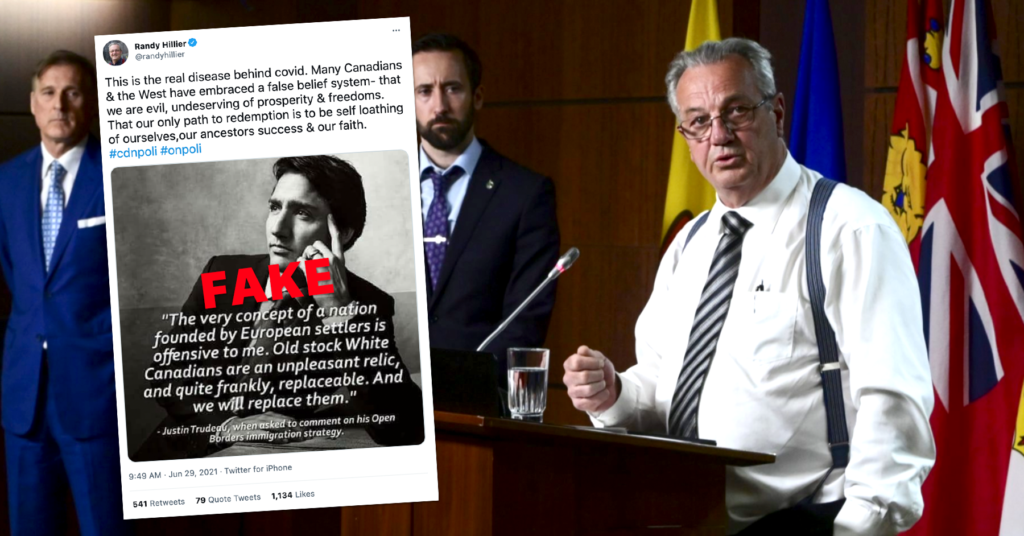 The Claim: Did Canadian Prime Minister Justin Trudeau really say that he has a plan to replace “old stock” white Canadians?

“The very concept of a nation founded by European settlers is offensive to me. Old stock White Canadians are an unpleasant relic, and quite frankly, replaceable. And we will replace them.”

Hillier added that the quote reveals the “real disease behind COVID” and encourages people to loathe “ourselves, our ancestors’ success & our faith”:

“This is the real disease behind covid. Many Canadians & the West have embraced a false belief system- that we are evil, undeserving of prosperity & freedoms. That our only path to redemption is to be self loathing of ourselves, our ancestors success & our faith.” 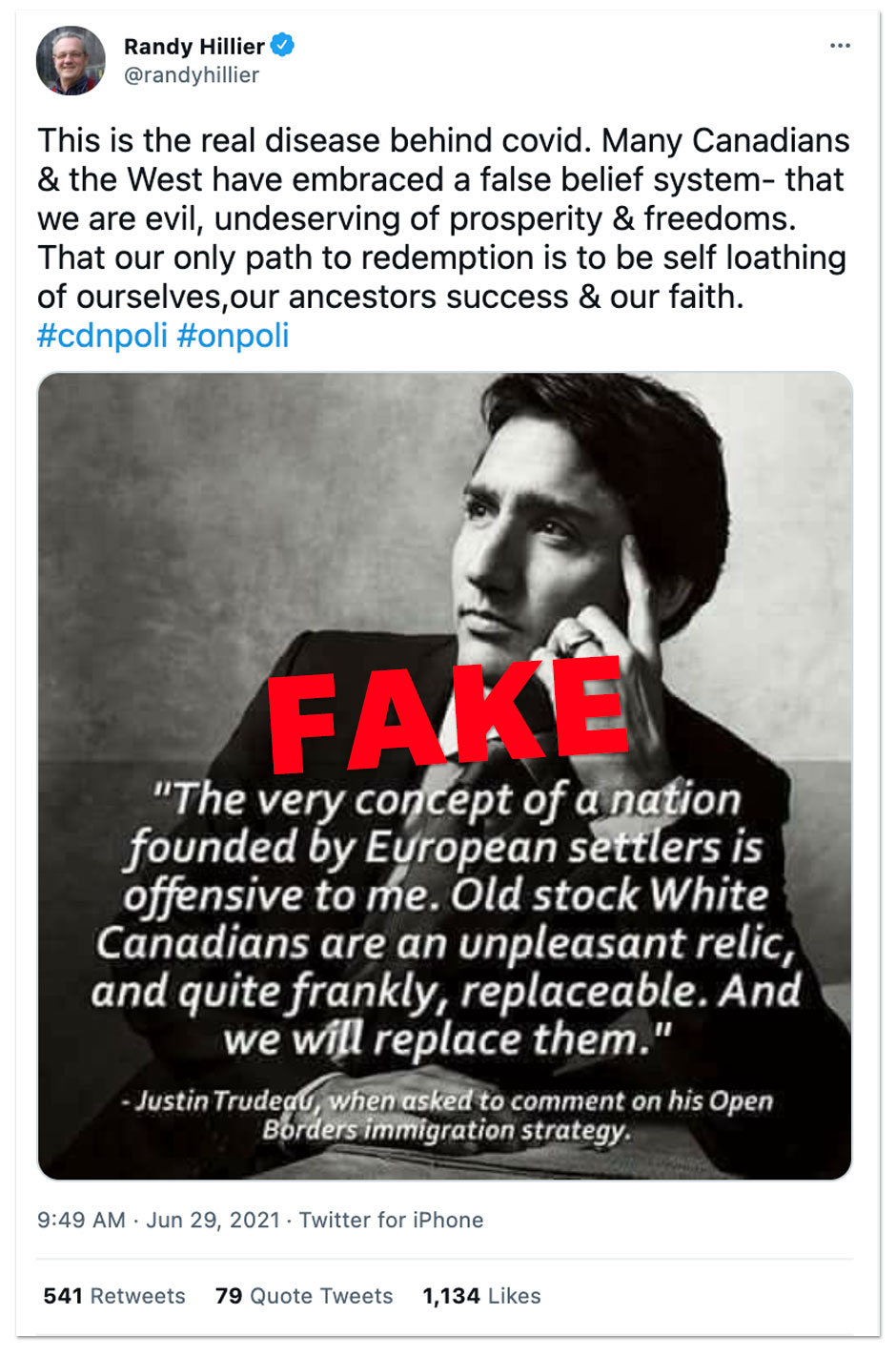 There is no evidence Justin Trudeau ever made the statement attributed to him in this meme. When asked, Hillier repeatedly refused to identify the original source proving the quote is real.

About the Source: Randy Hillier is the MPP for Lanark-Frontenac-Kingston. Though he was elected as a member of the Ontario PCs in 2018, he was suspended from the party by Doug Ford in 2019 for making insensitive comments towards parents of children with autism.

Hillier has spent the pandemic promoting events in small town Canada organized through the No More Lockdowns Canada group. In April, he was condemned by the town council in his own hometown of Perth, Ontario.

More recently, he’s been promoting a “Dominion Day” celebration on July 1st, which seeks to “honour our heritage” in the face of “various social forces” who seek to “erase our history and cancel our traditions.”

The replies of many of Hillier’s followers show they believe the quote to be real, stating that the meme reveals Trudeau to be a “monster” and “the greatest threat facing Canada.” Others approved of the quote and commented that now is the time “to stand up and remove the garbage people.”

The Reality: Once again, there is no evidence Trudeau ever made this statement.

In a statement, Hillier refused to identify the source of his Trudeau quote and announced that he had conducted his own fact-check on PressProgress, concluding that it is “a shill organization for Marxist propaganda.”

It is difficult to trace the origin of Hillier’s meme, however, one of its earliest appearances was on November 4, 2017 when Hollywood actor and outspoken Trump supporter James Woods flagged the meme as “obviously” fake.

“This is so obviously a fake meme,” Woods tweeted. “Not necessary to put Trudeau in a bad light. He accomplishes it by himself.” 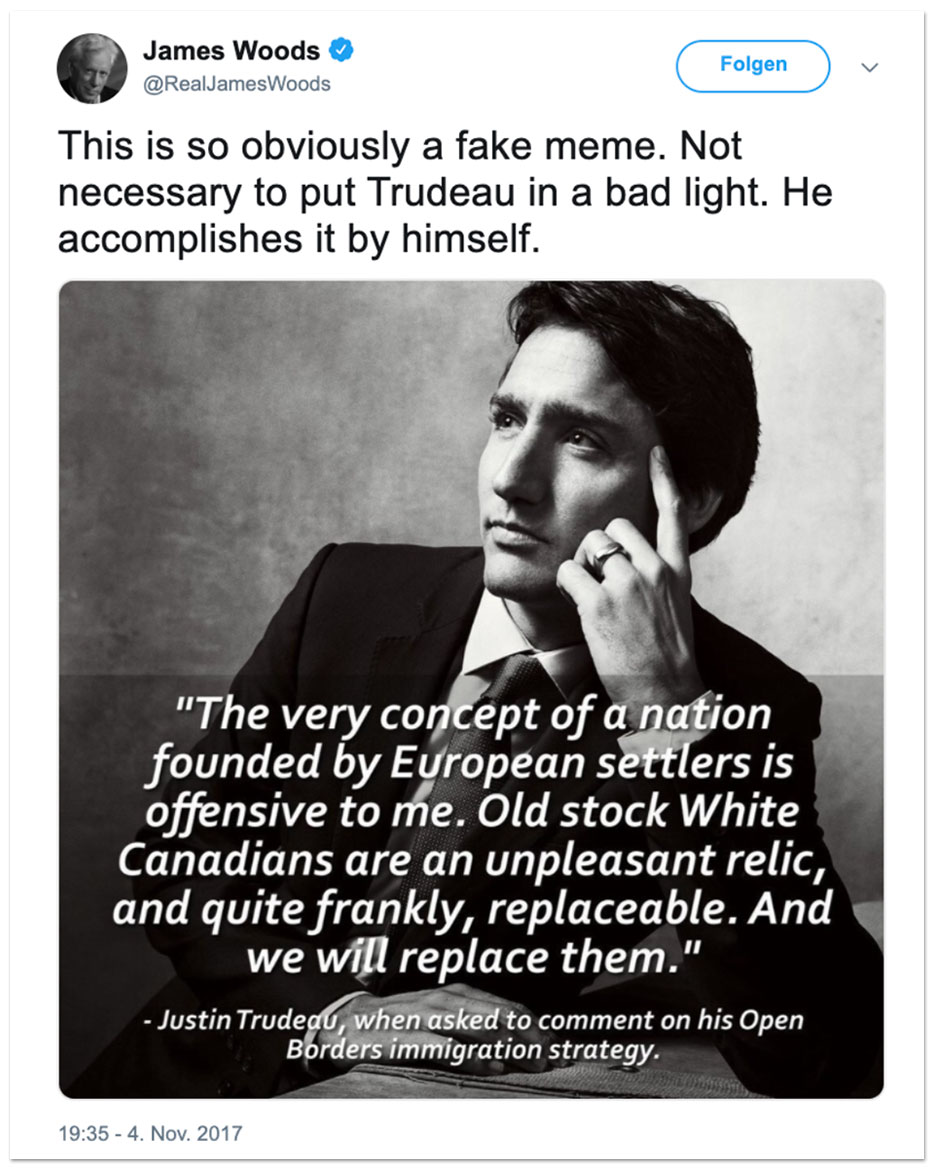 Around this same time in 2017, the meme was circulating on alt-right blogs.

Henry Markow, a blogger described by the National Post as a “prominent anti-Semitic conspiracy theorist,” posted the meme on his blog about neo-Nazi Paul Fromm and the “the globalist Jewish agenda.”

The quote later appeared in the comments of an alt-right blog called Vox Popoli, which is run by Theodore Beale. The Anti-Defamation League describes Beale as a misogynist and white nationalist who frequently blogs about the destruction of Western civilization.

Beale has said that the alt-right is focused on “securing a future for white children,” which clearly paraphrases the white supremacist “14 words” mantra.

The meme, which has reappeared over the years, has even stumped self-described “old stock Canadians.”

In 2018, the right-wing Facebook page “Old Stock Canadian” posted a note to their followers indicating that they “keep getting these messages over and over again” asking for the source of the quote in the Trudeau meme.

“I am trying to find the original source,” the Facebook page’s admin said. “We tried to verify the quote but to date, we have not been successful.”

“We believe the quote is inaccurate.” 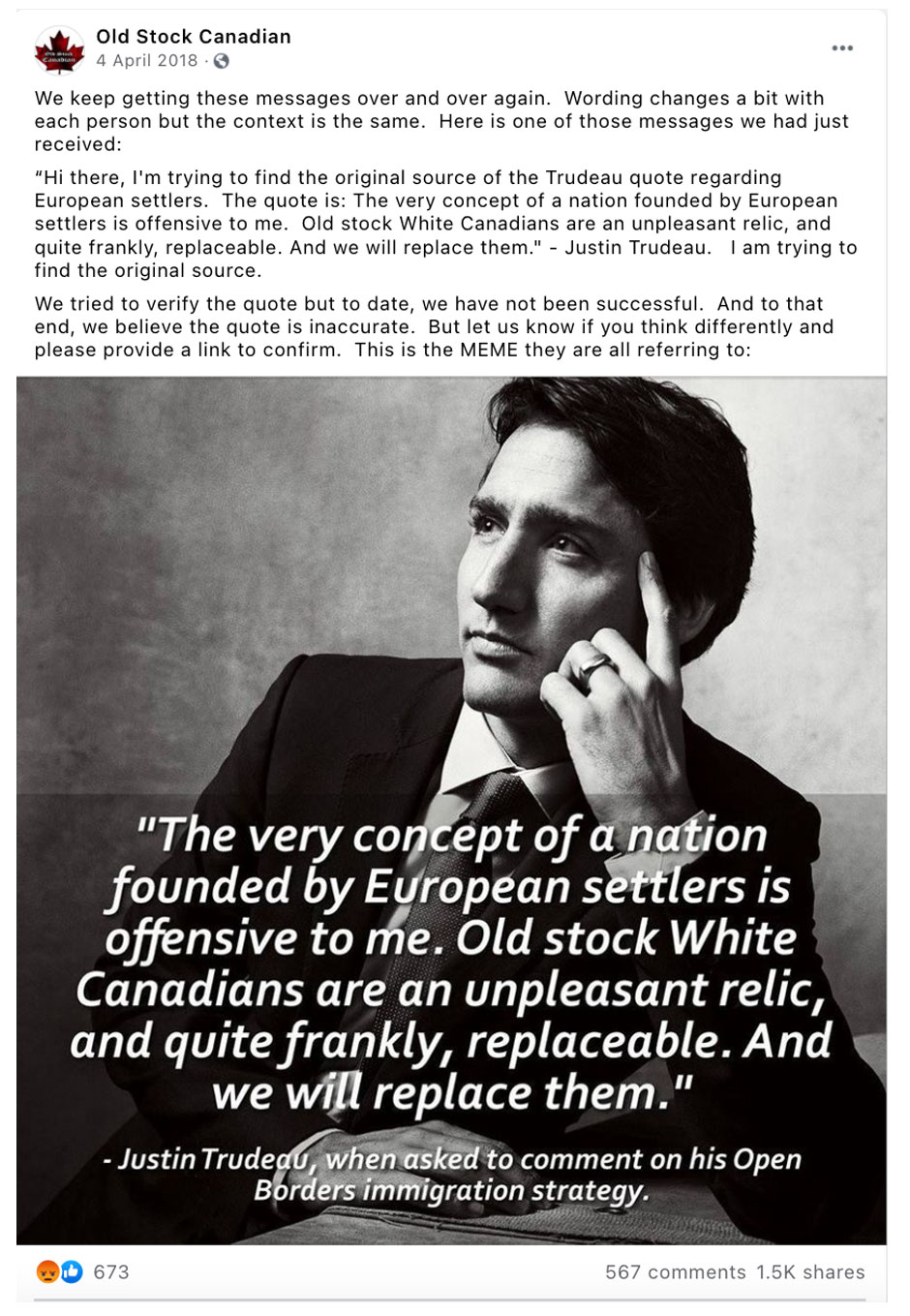