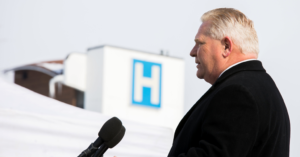 How Doug Ford made Ontario's health care situation even worse

According to a recent Environics poll, nearly 80% of Ontarians believe the health care system is now in a “state of crisis.”

Hospitals across the province have had to airlift patients, close emergency departments, extend family medical clinic hours and massively extend wait times to up to 40 hours and ambulance offload times to up to 151 minutes.

The crisis in Ontario’s health system isn’t just a seasonal trend – Ontario’s hospitals have been in and out of crisis since 2020, after decades of bed closures, funding cuts and wage freezes for staff.

While Ontario Premier Doug Ford did not create the problem, he has not helped either.

Over the past year, PressProgress has repeatedly shown the efforts of Doug Ford’s government to cut healthcare funding and privatize parts of the system – all while long-underfunded departments struggled to deal with influxes of patients.

Here are some of the ways Doug Ford’s government made the health crisis worse in 2022:

In 2018, the Ford government introduced Bill 124: The Protecting a Sustainable Public Sector for Future Generations Act, limiting all compensation increases to 1% across the public sector for years. It, moreover, defined compensation broadly to include all “discretionary non-discretionary payments”, and benefits – including vacation and sick days.

A few weeks ago, the courts found the legislation violated workers’ charter-protected right to meaningful collective bargaining, saying it was not “justified” in a “free and democratic society.”

But not before years of real wage cuts drove badly-needed healthcare staff to burnout and leave the system.

“We have the lowest nurse: patient ratio per capita in the country,” Angela Preocanin, first vice president of the Ontario Nurses Association, told PressProgress. “Typically where you’d have a nurse: patient ratio of 1:5 on a medical unit, it’s now 1:8. In Intensive Care Units (ICUs) with significant, critically ill patients, 1:1 would be the norm. Now? 1:3 is not unheard of.”

Looking for ‘efficiencies’ in staffing

Quietly this fall, documents from Ontario Health, obtained by PressProgress, revealed that the Ford government is also looking for new “efficiencies” in healthcare staffing.

In the agency’s most-recent business plan, it boasted that it is working to “quantify value-add opportunities for the health system” and “identify efficiencies, savings and value creation.” It underlined that this cost-saving program is to be done in “collaboration with the ministry.”

Among the “deliverables” quietly mandated for the agency last year was a plan to develop “performance measures” to track new savings on ”cycle time” or the time spent per patient visit and “spend per full-time equivalent” or spending on staff.

The Business Plan mandates the super-agency to:

That spring budget offered hospitals $68.414 billion, up slightly from $65.103 billion in 2021, a below inflation increase, along with temporary covid-19 funds.

Back in July, the FAO noted the Ford government spent over $1 billion less than it budgeted.

Plotting to privatize parts of the health system

Statistics from the office of Ontario’s Integrity Commissioner note that more lobbyists registered to influence health policy than on nearly any other issue in June – 1,137 registrations – aside from “economic development and trade.”

Responding to questions from reporters during Thursday’s press conference, Health Minister Sylvia Jones declined to rule out “lifting the cap on the number of private facilities” operating across the province.

“What I’m committing to is continuing to work with hospital partners, independent health facilities and healthcare professionals who see where opportunities are,” Jones said.