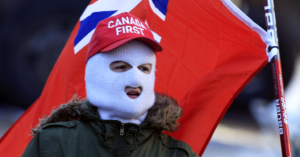 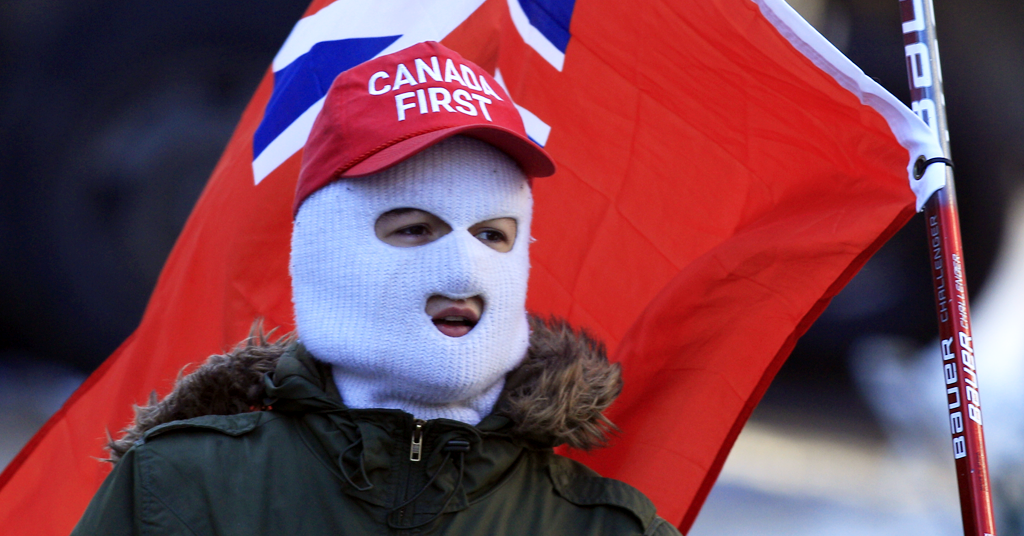 Who is really behind the far-right occupation of Canada’s national capital?

Ottawa is under siege, but who is really behind the occupation?

The siege began as a so-called “Freedom Convoy” of truckers disgruntled about public health rules for those crossing the US-Canada border.

Or so Canadians were told.

The fact remains 90% of Canadian truckers are vaccinated and the rules being protested only impact a small minority of truckers that do regular cross-border routes. Canada’s trucking industry had been vocal in disavowing the convoy well before they arrived in Ottawa as their extremism became clear.

While some, like Conservative leadership candidate Pierre Poilievre, have sought to downplay extremist elements within the protests as just a few bad apples, many of the group’s organizers and participants are drawn from the same old cast of characters.

In many cases, participants are the same people who’ve opposed public health measures throughout the pandemic and, more recently, stalked Justin Trudeau at campaign stops and protested at hospitals during last year’s federal election.

Here’s a run-down of the extremists and social media influencers helping to amplify their messages who have been spotted in Ottawa:

The “Freedom Convoy” was originally organized by a group called Canada Unity, which was founded by a man named James Bauder. Bauder is linked to far-right “Yellow Vest” groups and has harassed picketing oil refinery workers.

Bauder is an author of the convoy’s “memorandum of understanding” that calls for overthrowing Canada’s democratic government and replacing it with an unelected junta consisting of convoy leaders, the Senate and the Governor General.

Other top organizers include Benjamin Dichter, a failed Conservative and People’s Party candidate, who recently stated he welcomes the Confederate flag in Ottawa, as well as Pat King, a far-right figure who previously broadcasted rants about the “depopulation of the Caucasian race” and suggested the only way the convoy to Ottawa would be “solved is with bullets.”

This is Pat King an organizer of the #OttawaOccupation #FreedomConvoyCanada2022 . Is this who @CPC_HQ think Trudeau should meet with? pic.twitter.com/S3GHaHMEQ9

One of the most visible political figures during the siege has been Randy Hillier, an independent Ontario MPP who was kicked out of Doug Ford’s party a few years ago — Hillier is getting ready to run under his newly created Ontario First Party in this spring’s election.

Over the weekend, while standing on the steps of Parliament Hill, Hillier delivered a dangerous speech that likened the convoy’s struggle to that of Canadian soldiers fighting at Vimy Ridge. He then told his supporters: “This is the hill we die on.”

This is very dangerous rhetoric:

While standing on the steps of Parliament Hill, former Ontario PC MPP Randy Hillier compares their struggle to Canadian soldiers fighting the Battle of Vimy Ridge then tells a crowd of supporters: “This is the hill we die on.”#ottnews pic.twitter.com/vTWMIUpazP

Hillier appears to be leveraging connections from No More Lockdowns, a group he founded in response to COVID-19 public health restrictions — the group’s corporate records list his daughter Chelsea Hillier, a failed People’s Party candidate, as the for-profit company’s sole proprietor.

In fact, Randy Hillier has played a key role communicating and coordinating with a network of drivers of large industrial and agricultural vehicles that have clogged-up Ottawa streets, often using encrypted social media apps like Telegram.

Other top organizers include individuals with police and military backgrounds, which may help explain their unusual strategies and tactics, including the establishment of elaborate bases and supply lines.

One such organizer, Tom Quiggin, is a former RCMP and intelligence officer and taught at the Royal Military College. Quiggin has spoken at events hosted by the right-wing Manning Centre, where he falsely claimed the Québec City mosque targeted by a far-right terrorist in 2017  was, itself, helping terrorists.

Others involved with the occupation have long ties to protests against various public health measures during the COVID-19 pandemic.

Henry Hildebrandt, a doomsday preacher from Aylmer, Ontario, is a close ally of Hillier and his No More Lockdowns group. In an interview with CTV’s W5, the pastor of Aylmer’s Church of God stated he believes the support he is receiving opposing COVID-19 public health measures are the fulfillment of an apocalyptic prophesy and a sign that “the end of coming.”

Hildebrandt was filmed pleading with a police tactical unit that raided one of the protesters’ illegal logistics camps set-up at Ottawa’s baseball stadium.

Witnesses say before the police raid they saw a drone fly overhead surveilling them. Then dozens of officers came over the snow banks and surrounded them. Protestors prayed for police pic.twitter.com/1Ie7tFxFmY

The Line was one of the first anti-public health groups that organized protests in opposition to COVID-19 measures in April 2020. That group’s leader, Lamont Daigle, was filming videos inside his car in Ottawa. Vladislav Sobolev, whose anti-mask group Hugs Over Masks received media attention early in the pandemic, was also spotted on Parliament Hill.

Nadine Ness, the leader of a group with links to far-right conspiracies called Unified Grassroots, is in Ottawa too. Ness’ group, which opposes vaccination policies, had a long phone call with Saskatchewan Premier Scott Moe in December.

Another figure spotted in Ottawa this weekend was an anti-vaccine activist named Chris Sky, who recently had a warrant issued for his arrest in connection to  an incident where led an angry unmasked mob into a West Edmonton Mall toy store (Sky reportedly turned himself into police a few days later).

In Ottawa, Sky posted a TikTok video showing himself amid a hostile mob that was charging at police, forcing them to fall back from a position near Parliament Hill.

Wondering why there were no cops at the 100+ person street party with a DJ on a truck at Rideau and Sussex last night?

The protestors chased them off.

Sky is not the only siege participant with a spotty criminal record.

Scott was handed a criminal conviction after his business violated public health rules and sentenced to 18 months probation in December. 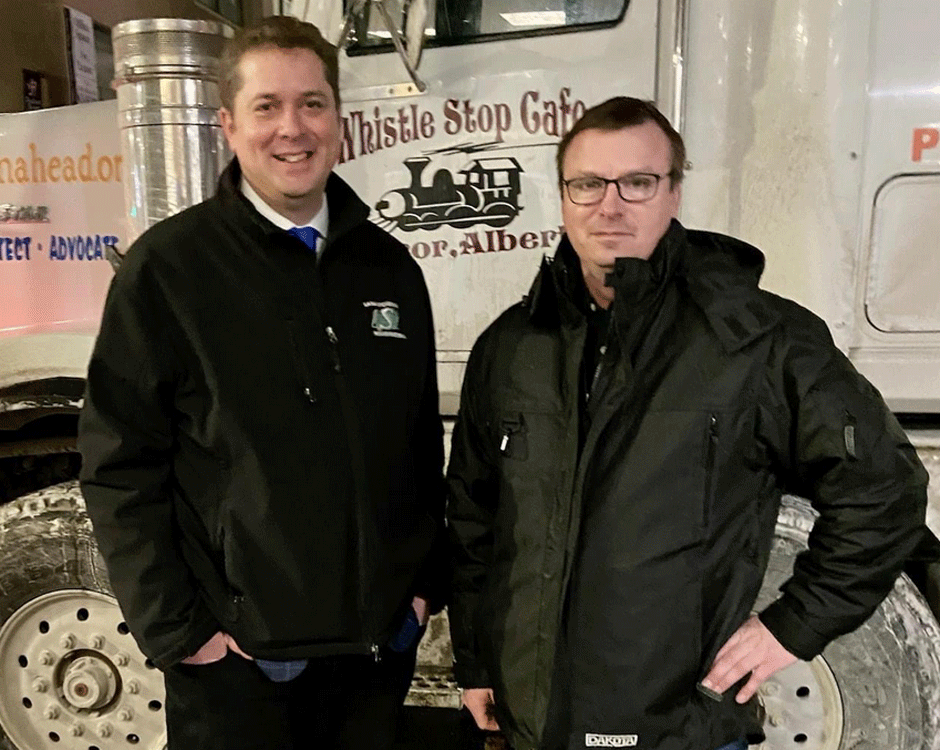 Elements even further to the extreme far-right are also embedded in the convoy.

Several members of the so-called Plaid Army, a neo-fascist group that wishes to stage a violent revolution to establish a new “Diagolon” country joining the Canadian West with parts of the United States, have been spotted at the centre of the chaos in downtown Ottawa.

Tyler Russell, the group’s leader, was spotted with a man who was criminally charged with assaulting Prime Minister Justin Trudeau with a weapon at a campaign stop during the last federal election. On Sunday, Russell was spotted in a red “Canada First” hat yelling at police during a raid on the protesters’ illegal command base established at Ottawa’s city-owned baseball stadium.

Protestors yelling at contingent of Ottawa Police and OPP pic.twitter.com/9wVp3AAu4h

A man named Chris Elston, an anti-trans activist who has been travelling the country staging protests outside of elementary schools, was spotted on the Rideau Canal. Sandra Solomon, a noted anti-Muslim activist, delivered a speech on Parliament Hill. Anti-vaccine conspiracy theorist Kelly Anne Farkas  was reportedly heard encouraging protesters to use bathrooms at the Holiday Inn Downtown Ottawa.

The siege has also featured an appearances by Romana Didulo, the self-declared “Queen of Canada” who was arrested in December after threatening health workers— PressProgress spotted the Queen of Canada’s RV camping out overnight in front of Finance Canada’s headquarters in Ottawa. 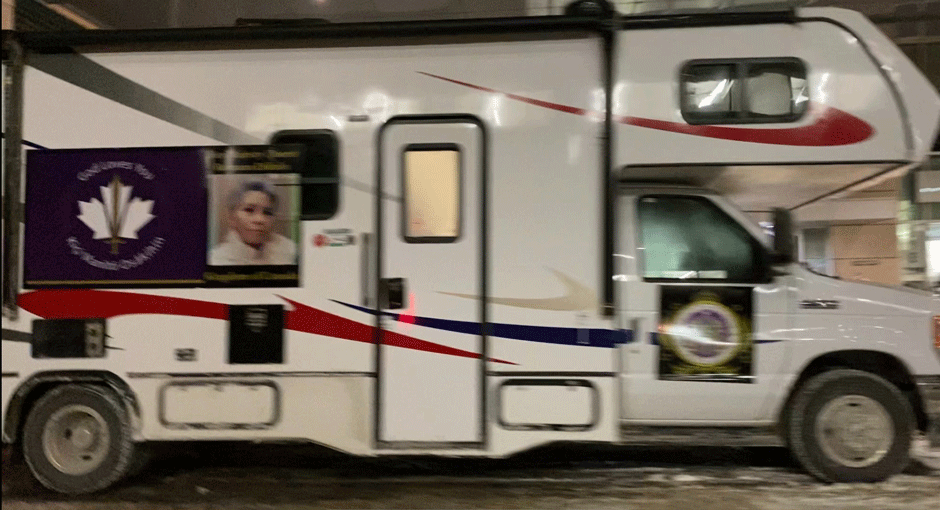 The protests have also featured vehicles displaying signs promoting the sovereignist Maverick Party and Wexit, a far-right secessionist movement that seeks to break away Alberta, Saskatchewan and other western provinces from the rest of Canada.

Top convoy organizer Tamara Lich is a long-time Wexit activist and a founding member of the Maverick Party’s governing council. 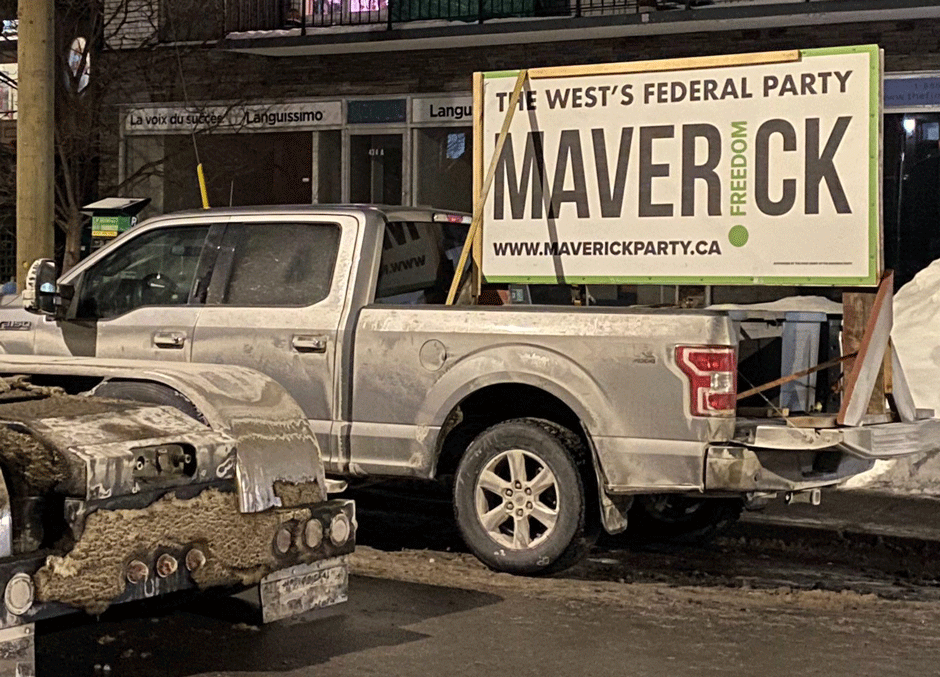 And then there’s QAnon.

QAnon is a delusional online community that believes Donald Trump is waging a heroic battle against a secret cabal of Satanic pedophiles. They had a highly visible presence at the US Capitol during the January 6 insurrection. 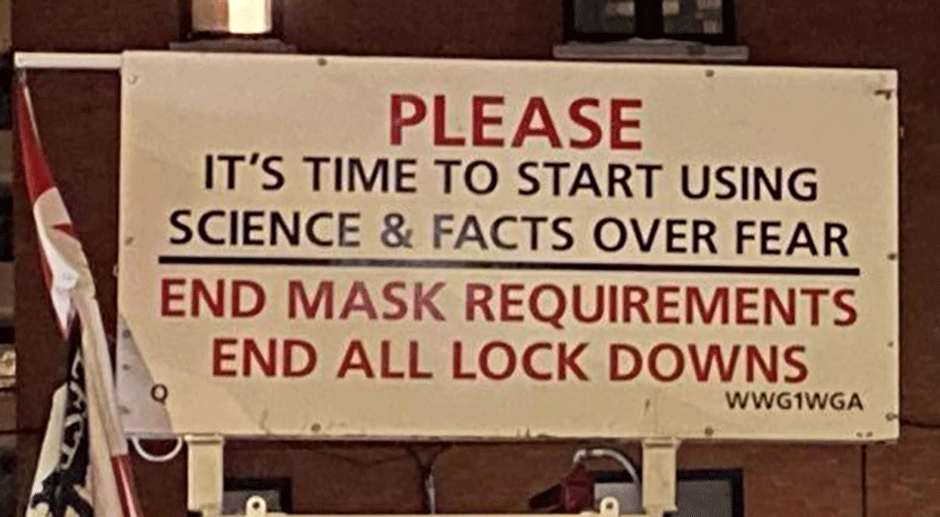 Other signs make reference to “Nuremberg 2.0,” an idea popular in QAnon circles that those responsible for public health restrictions will be tried and hung for treason in secret trials.

The siege has also occupied the attention of Canada’s right-wing media ecosystem. 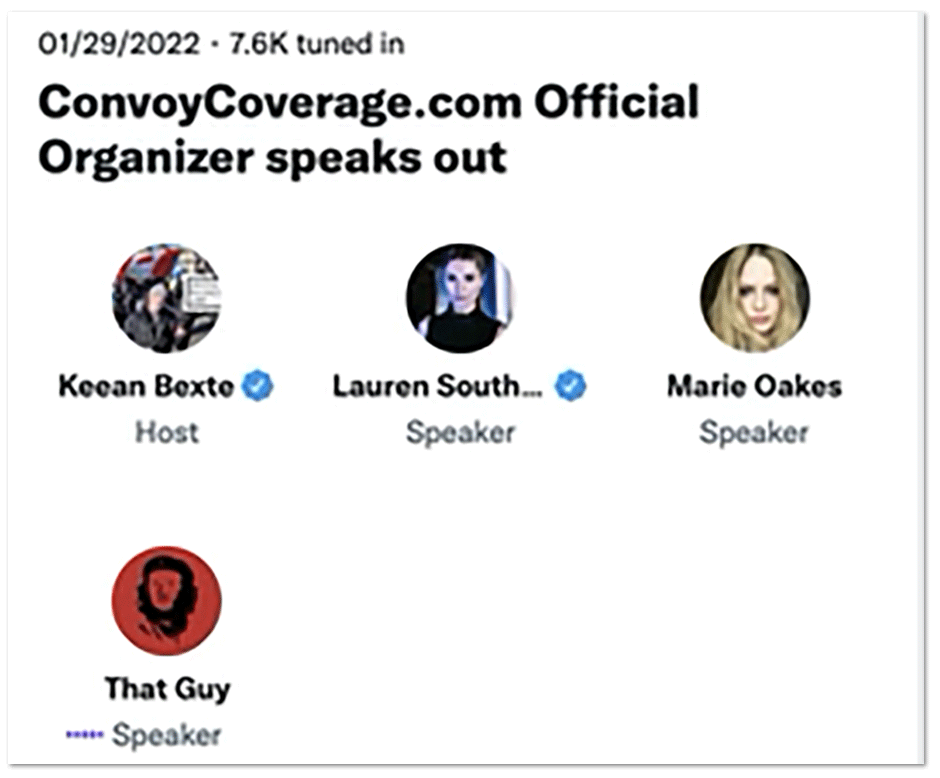 The occupation has also brought out a number of social media influencers that have been a mainstay at anti-lockdown protests.

Former 700 Club host and People’s Party candidate Laura Lynn-Tyler Thompson has been livestreaming from the streets of occupied Ottawa, as has another livestreamer named Selena Paley, a People’s Party supporter who runs a page called Freedom Central.

Another character, Jim Kerr, has been a familiar face at anti-lockdown protests over the last two years, driving from town to town in a psychedelic school bus called the “Church of Bubbles.” He was spotted at protests at PB’s Peterburgers in Peterborough, Ontario as well as Hildebrandt’s Church of God in Aylmer, Ontario.

Kerr, who has been a prolific livestreamer, was also spotted at a rave on the steps of Parliament Hill. 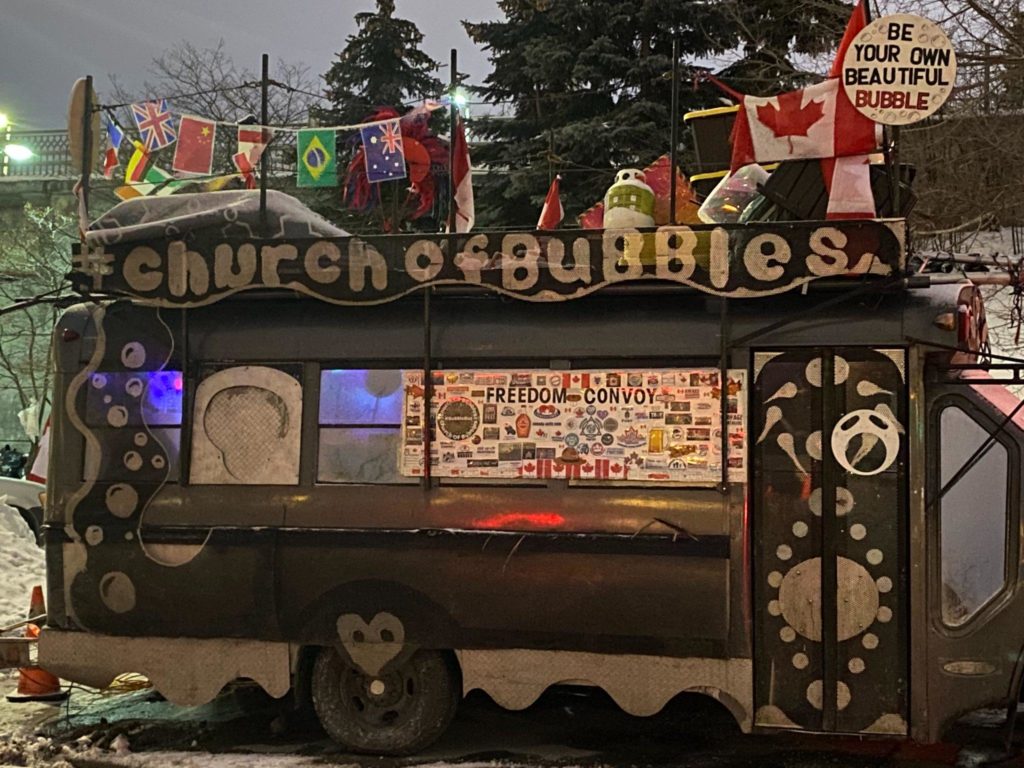 Other social media influencers have gotten in on the action too. Austin Hill, runs an Instagram account called ShotsByHill, previously an amateur photography account that has since become radicalized.

Hill has been creating videos wandering around downtown Ottawa handing out $20 bills directly to truckers in support of the occupation, funds which he obtained by requesting donations via PayPal.

With contributions from the Canadian Anti-Hate Network.