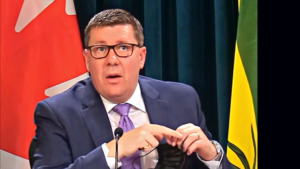 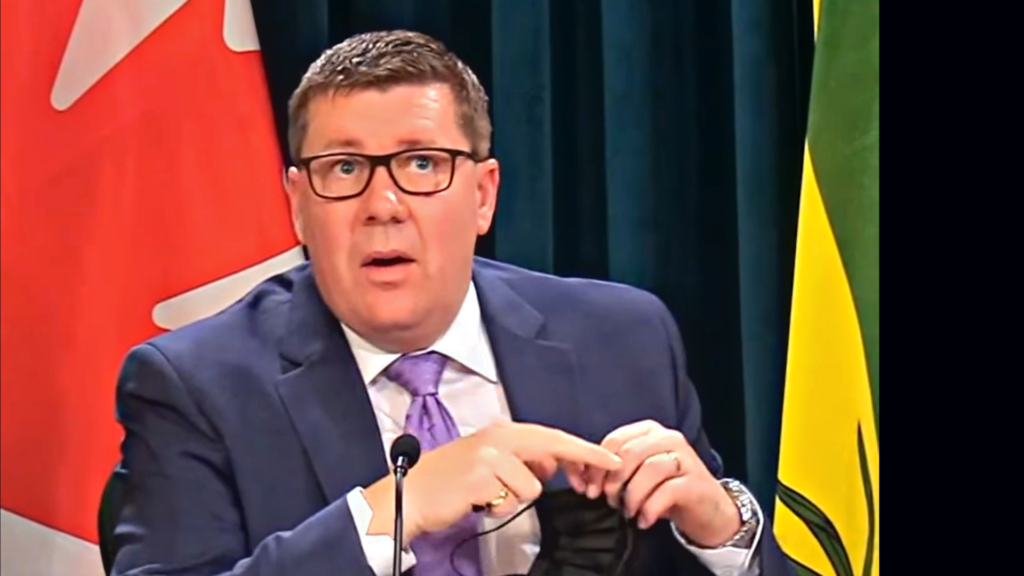 This article is more than 1 year old
NEW

Saskatchewan Premier Scott Moe had an hour-long phone call with the leader of a group that opposes COVID-19 public health measures and appears intertwined with far-right conspiracy theorists and socially conservative evangelicals.

In December, Moe came under fire from health experts for taking a call with Nadine Ness, president of a group that calls itself “Unified Grassroots.”

Moe defended his phone call with Ness and criticized NDP opposition leader Ryan Meili for suggesting Ness holds extreme views: “We should not be labelling them with ‘right-wing wacko’ terms like the leader of the opposition is.”

Unified Grassroots began organizing in opposition to Saskatchewan’s back-to-school policies in 2021. Since then, it has grown to over 12,000 members in its Facebook group.

Ness maintains her group is not anti-vaccine or anti-mask. From the outset, Ness has told members of her group to be “respectful” and be careful about sharing misinformation so they don’t get dismissed as “crazy.”

In the early days of the pandemic, the Today Show featured a segment on people who turned on their Christmas lights to help cope with the pandemic.

One person featured in the segment was a Twitter user named “Nadine,” using the Twitter handle “@NadineGB204.” 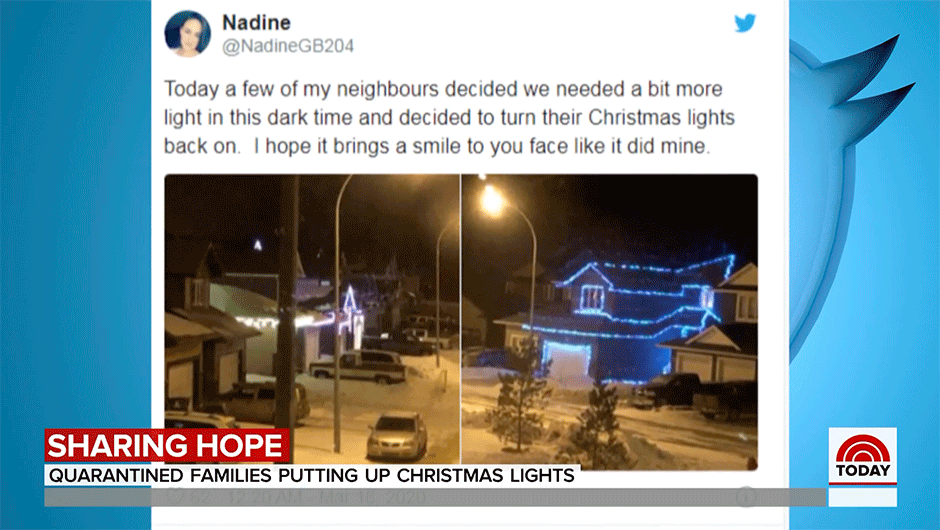 Is @NadineGB204 from the Today Show the same Nadine who spoke to Scott Moe?

For one thing, @NadineGB204’s profile photo from the Today Show is identical to the one that currently appears on Ness’ @NadineGNess Twitter account. 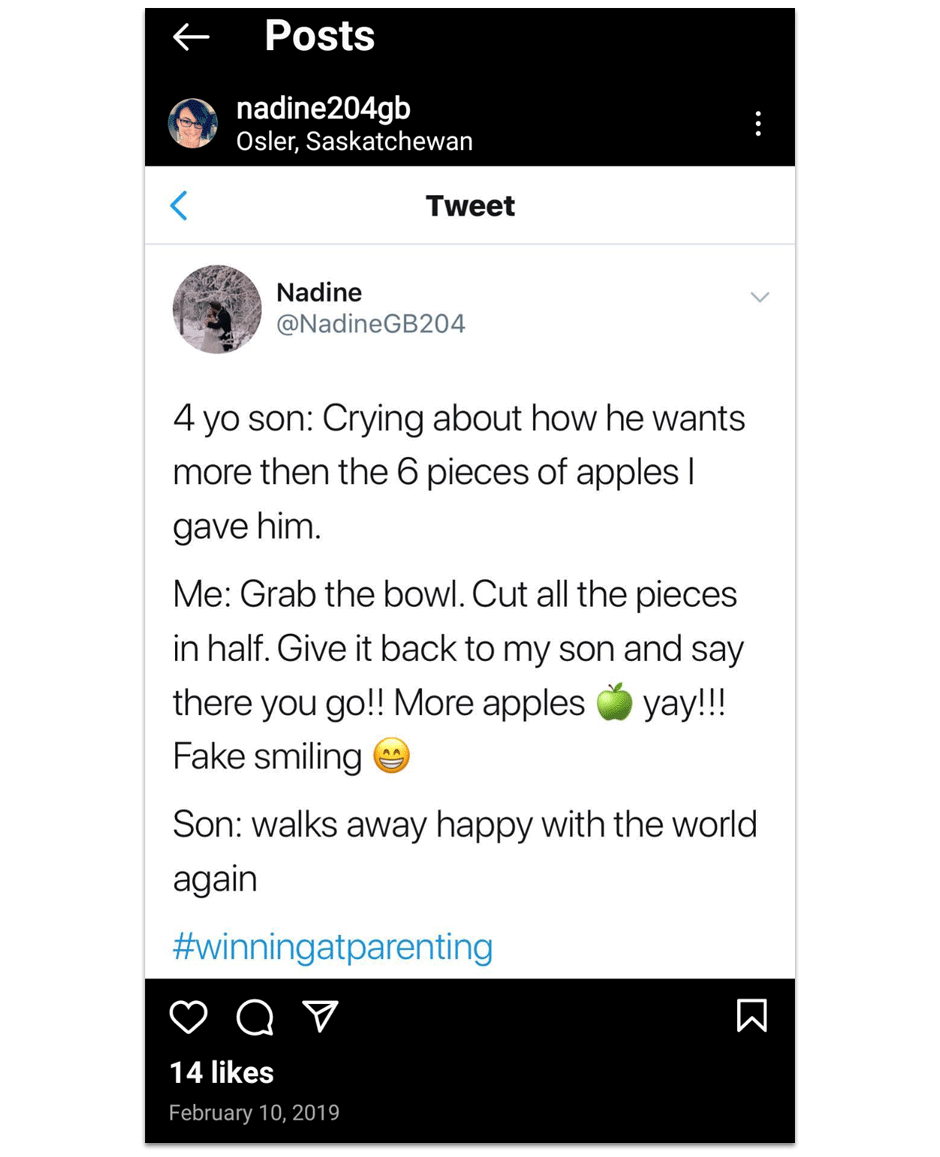 Despite these connections, Ness did not respond to multiple requests from PressProgress asking if this is her secret Twitter account. 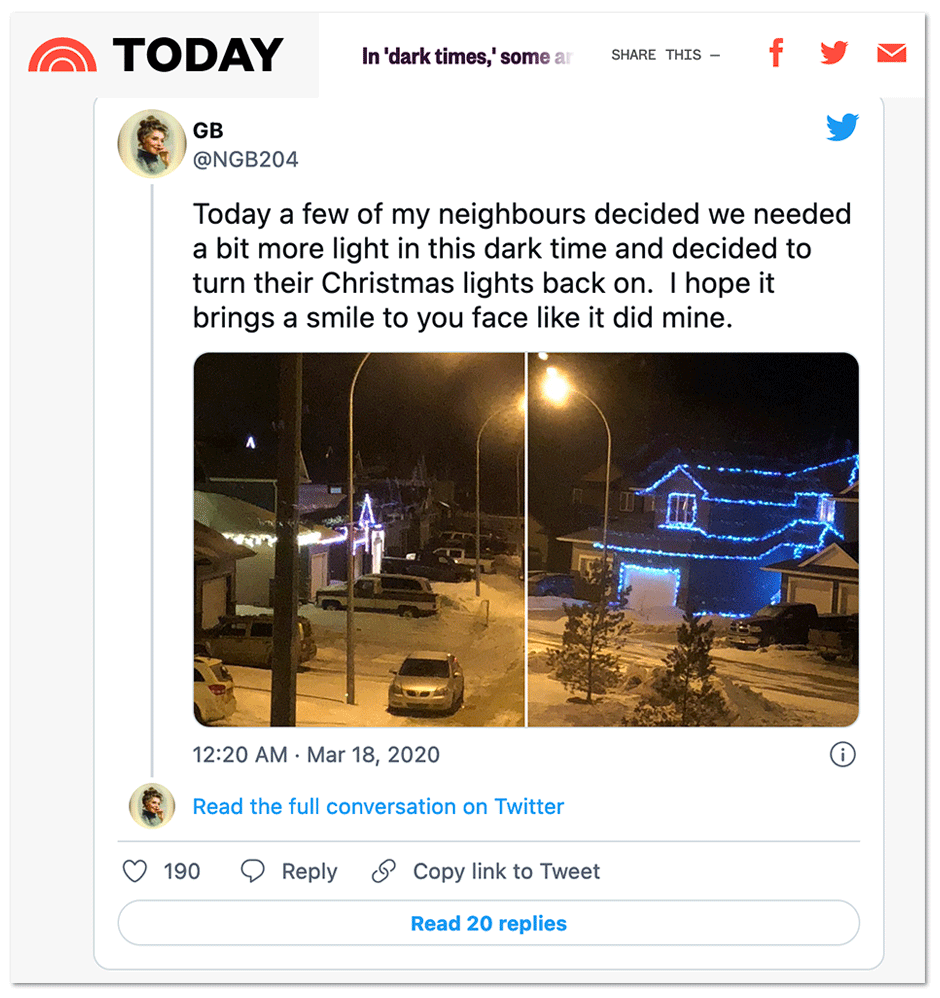 In the early days of the pandemic, the account promoted a COVID-19 conspiracy that claimed Justin Trudeau is “destroying Canada on orders and directions from the Cabal through Soros and the UN.”

It’s worth noting that Ness is also a former RCMP officer.

“Hitler used criminals to murder millions of villagers. They want them released so they can put them to work.” 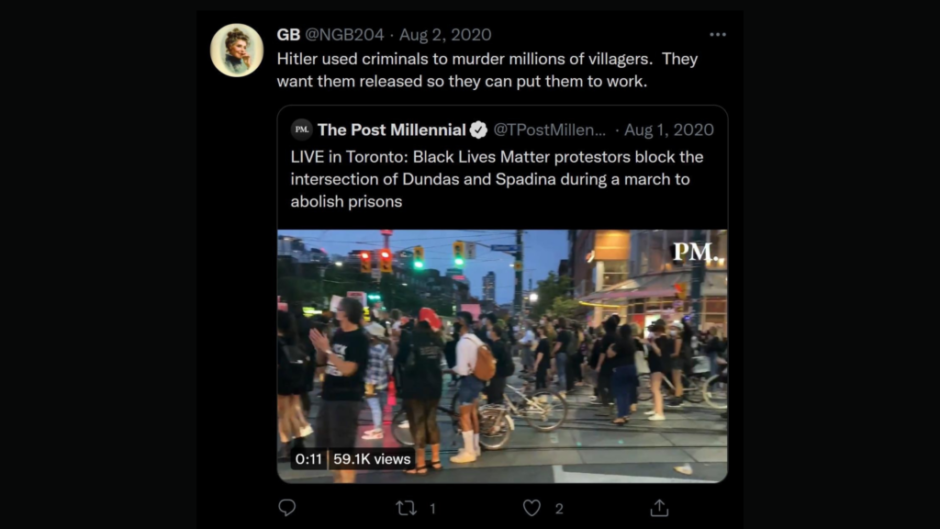 And despite Ness’ statements to media outlets denying her group is anti-vaccine, the account has a few things to say about vaccines too.

In one tweet, the account claims it is “very pro-vaccines,” but “not a vaccine that has been rushed into production and zero study” — “I’d rather get COVID-19 and treatment instead, thank you.”

“Look at all the BS studies trying to squash hydroxychloroquine when it does in fact work,” the account said in another tweet. “There is a cure, but it’s not profitable like a ‘vaccine’.” 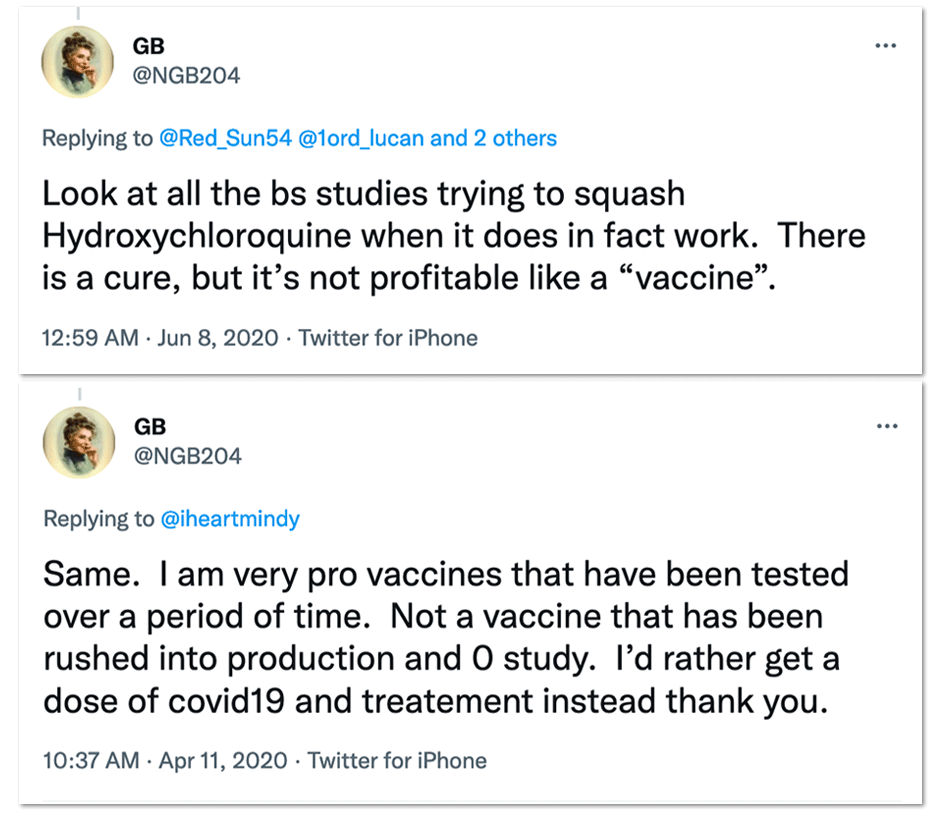 In a December 31 posting in the private Facebook group, Ness stated that the group is led by “Christian values” and said she felt “called” to lead the Unified Grassroots Facebook group. She added that she “will be obedient to God no matter how uncomfortable it makes me.”

Other postings show Ness interacting with former Sask Party candidate Daryl Cooper, who was dropped as a candidate by Moe’s party during the 2020 provincial election after PressProgress revealed he had interacted with QAnon content.

Cooper, who is another one of the group’s organizers, volunteered to help organize Unified Grassroots’ first day of action.

The candidate explored possibility that the pandemic was caused by 5G technology and ‘galactic cosmic rays’ in now-deleted post.https://t.co/ynSJHsIYwh #skpoli #skvotes2020

Ness agreed to promote Cooper’s prayer nights in a Facebook comment just days after the group was created.

Cooper shared a conspiracy video linking the COVID-19 vaccine to the Mark of the Beast and the Antichrist in his own public group called Daryl Cooper Report. He also referred to those who support the government mandates as “false prophets.”

Cooper has also spread information about how to get religious exemptions to the COVID-19 vaccine from Saskatchewan-based pastors. 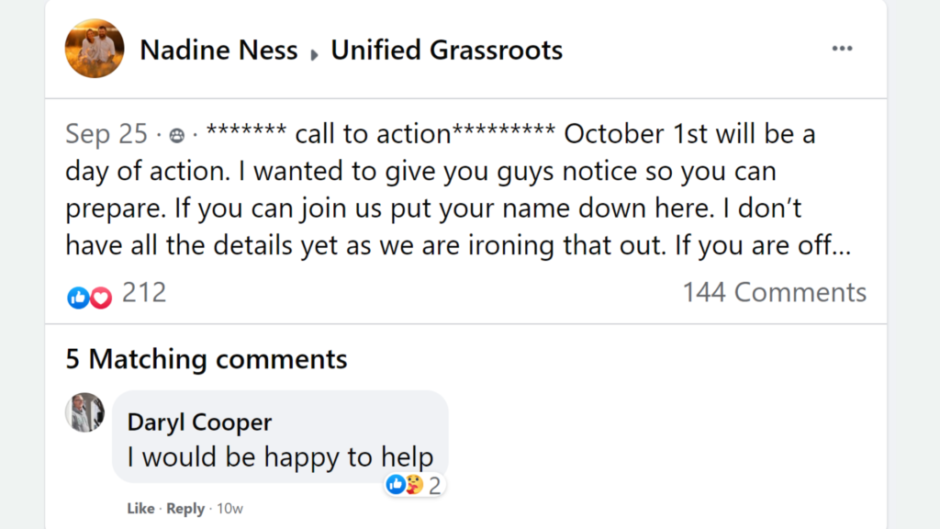 “Daryl is the connector. He knows so many people and is a huge help planning and organizing events,” Nadine wrote in another Facebook comment.

Ness has also encouraged Unified Grassroots members to attend the so-called “Convoy for Freedom 2022” that is protesting requirements that truck drivers who cross the US-Canada border be vaccinated against COVID-19.

However, Unified Grassroots’ friendlier rebranding seems to have worked in gaining an audience with the Saskatchewan Party — and Ness believes Moe is listening.

Right after Moe’s hour-long call with Ness in December, Moe held a press conference calling for the end of “stigmatizing the unvaccinated.”

“This is what happens when you don’t give up.” Ness told the private Facebook group. 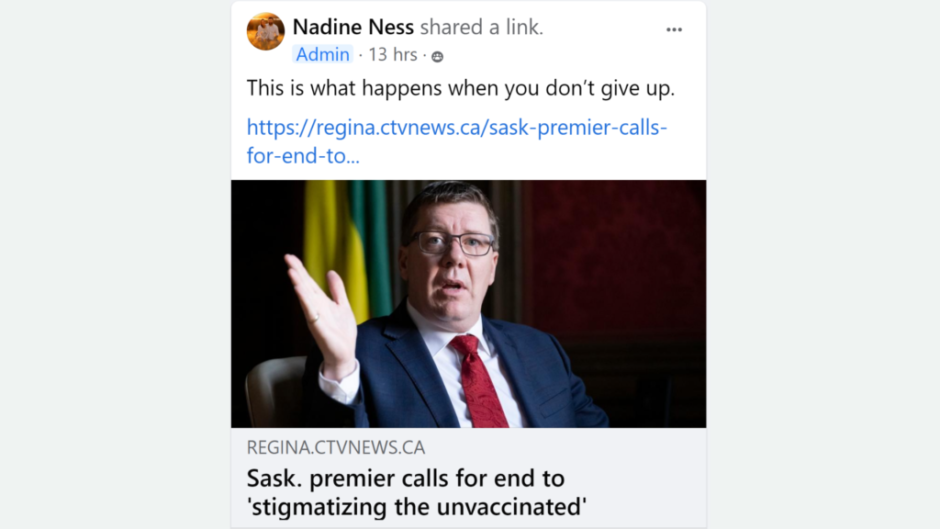 McCullough promoted false and unsubstantiated claims about COVID-19 on the Joe Rogan podcast in December. Redman has opposed COVID-19 gathering restrictions since 2020 writing for a Conservative think tank that also supports airport privatization and race and IQ theories.

The Saskatchewan Party did not confirm or deny whether government officials attended the meeting.

Moe held another press conference two days later, saying he would not introduce any gathering limits to respond to the rapid Omicron spread. Saskatchewan remains the only province with no gathering limits.

Ness described this development as “pretty awesome” and “a good step again in the right direction” in a January 14 Facebook Live video She also suggested this policy could have been a result of Saskatchewan Party MLAs attending the Zoom call.

Unified Grassroots’ “mission” for the next three weeks, according to Ness, is to push the Saskatchewan Party government to drop the vaccine mandate completely.

Ness also believes media coverage critical of Unified Grassroots is a sign they are doing the right thing and referred to mainstream media as the “enemy of the people” in a Tweet. 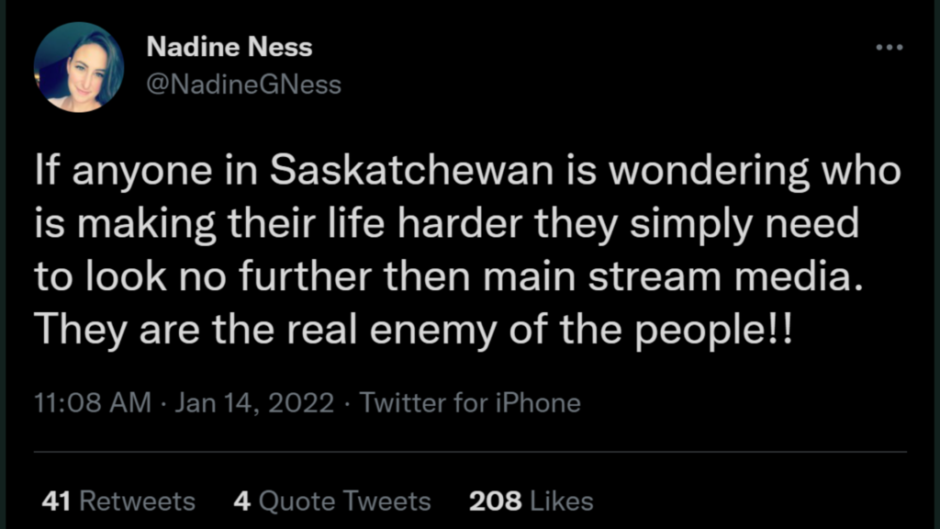 “If we’re doing a move of God and things are changing for the better, the attacks will come,” Ness continued in the video. “If the media wasn’t attacking us, I’d be more worried.”