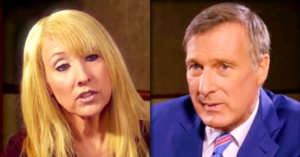 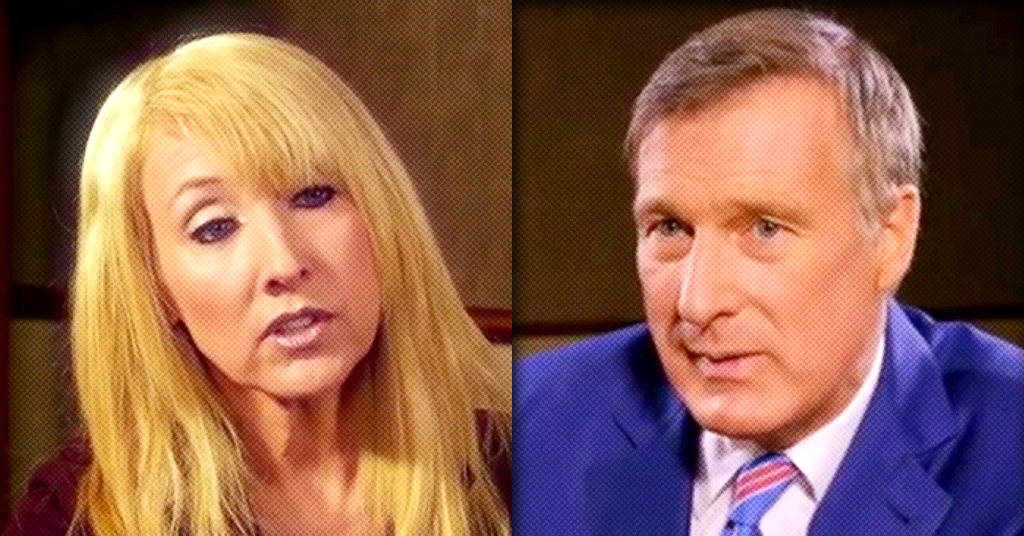 “I think that destiny is playing out,” People’s Party candidate says

A star candidate for the People’s Party of Canada is spreading word that Maxime Bernier may be the second-coming of an ancient biblical king.

Laura Lynn Tyler Thompson, a former televangelist on the 700 Club Canada and a hardline anti-LGBTQ activist currently running in Red Deer, is telling supporters that the People’s Party leader may be fulfilling a “prophesy” as the modern-day incarnation of a biblical king named “Jehu.”

According to the Old Testament, “Jehu” is an ancient king who seized power after leading a bloody revolt against the evil queen Jezebel. 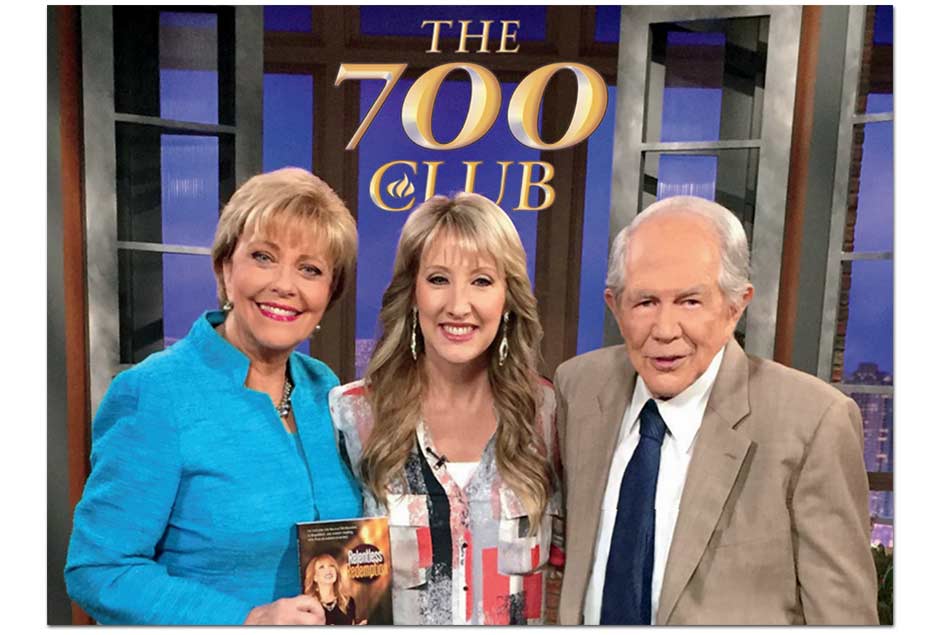 “I am very grateful sir, because I think that destiny is playing out,” Thompson told Bernier in a recent video interview.

“You do know there’s been a prophesy about you, right? That you are like a Jehu?” Thompson said. “A very notable person, who’s not a fly by night, has put this prophesy on you.”

“I’m doing my best,” Bernier modestly replied. “We will see what will happen.”

The “notable person” Thompson referenced is Pastor René McIntyre, a self-described “prophet” and leader of a church called “Trumpet Of Truth Christian Ministries.”

In the video, McIntyre claims God spoke to her directly about the Maxime Bernier after she delivered a sermon titled “A Word Over Canada” in August 2018.

“I felt like the Lord said to me ‘I’m bringing forth Maxime Bernier as a Jehu’,” McIntyre explains, quoting the message that she says came from God.

“‘I am putting my hand on him in this hour, and I’m going to strengthen him and embolden him to begin to fight against and call out the tyranny of our current government’.”

“The Lord is done,” she continues. “He is ready to topple over Jezebel’s reign and the reign of Ahab, because I truly believe that Jezebel is the principle spirit over this nation right now, and she has brought in her Baal worship. There’s all kinds of demonic worship going on.” 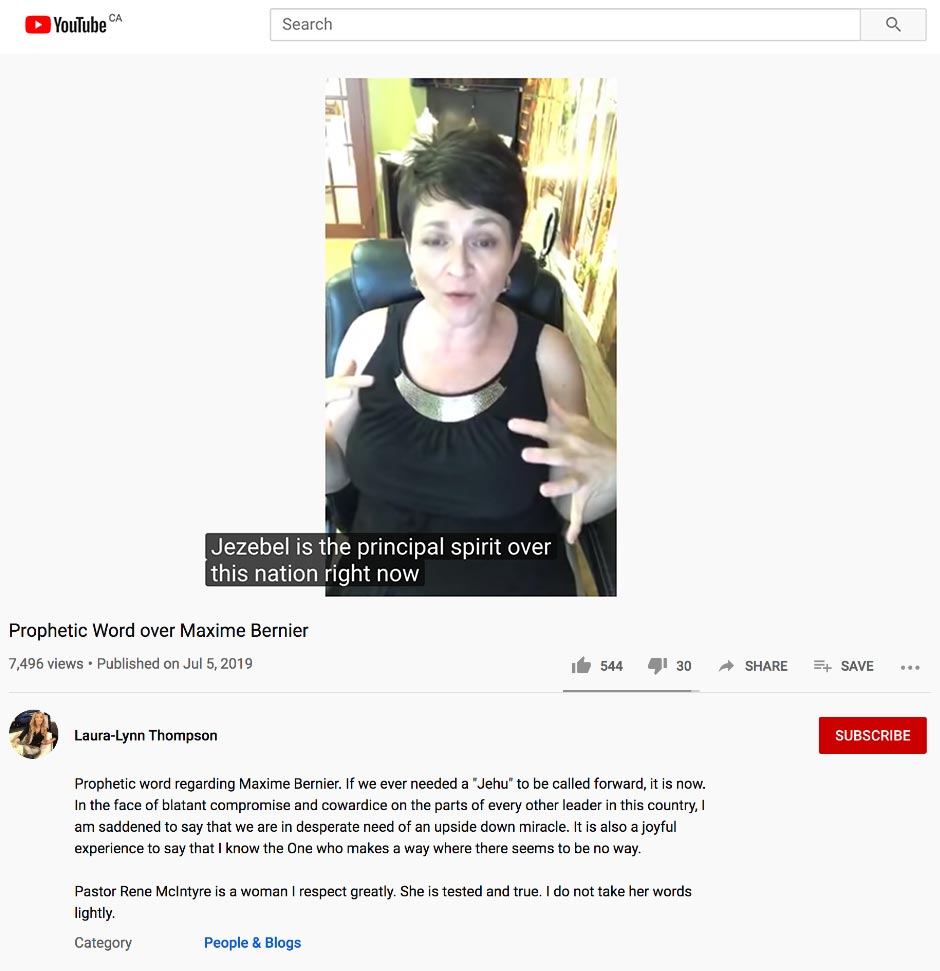 Some religious extremists compare modern culture to “Jezebel’s reign,” claiming LGBTQ and abortion rights and are signs of modern-day “Baal worship,” in reference to an ancient deity that rivaled Abrahamic religions in biblical times.

McIntyre says she told Bernier about her message from God and the People’s Party leader promised to do his best to make the “prophesy” come true.

“I was able to prophesy this word over Maxime Bernier, and in fact he received it with great joy,” McIntyre says. “He was grinning from ear to ear and he said ‘I will try, I will do my best’.”

Thompson did not respond to a request for comment from PressProgress seeking more information about the prophesy.

Bernier did not respond when asked if he personally believes in the Jehu prophesy.

Despite her talk of biblical prophesies, Thompson issued a “BIG APOLOGY” to her supporters last week when she posted a statement on Facebook that appeared to cast doubt about the idea Bernier has been “called by God.”

Thompson explained that she had copy-pasted text written by someone else into her Facebook and mistakenly posted it as if they were her own words:

“I did some fasting, prayer directly regarding Max and this election. I also met with leaders of the body of Christ while speaking and meeting in 12 different cities in the last month … In each city and gathering I asked them what they were getting and feeling regarding to the election regarding Max. Are you ready for this? Not one felt Max is called by God for this. Not one.” 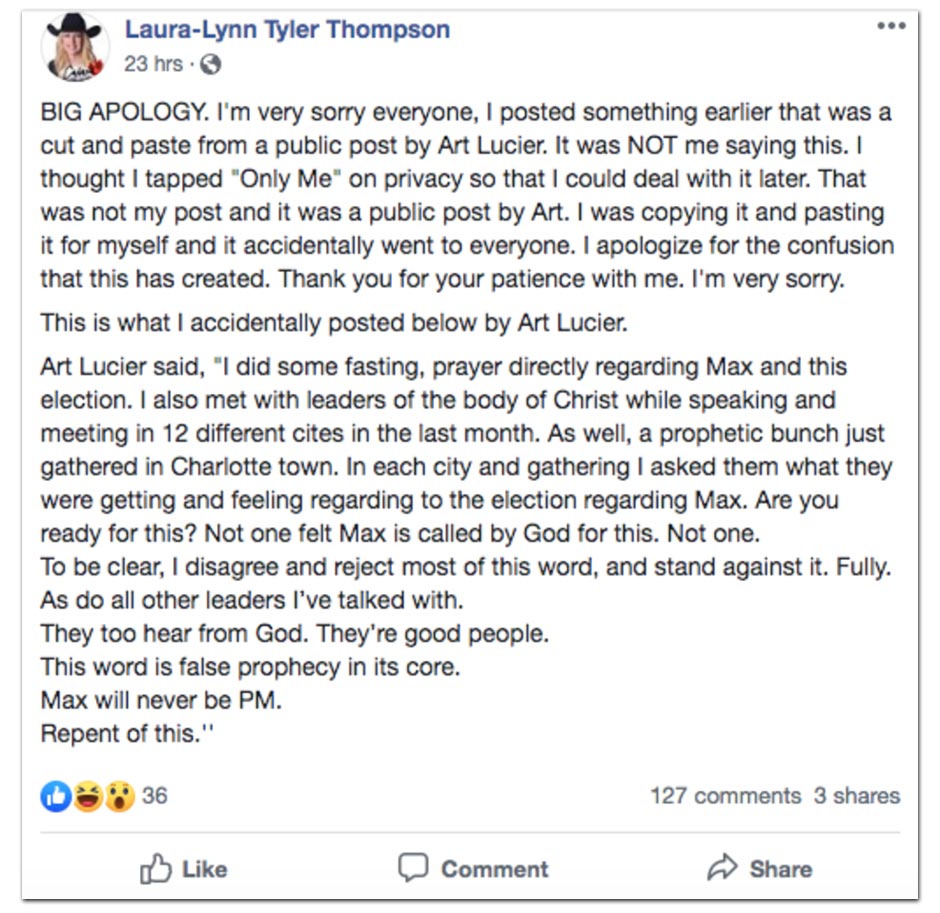 Asked by one of her Facebook followers if Thompson still believes that Bernier will win the election, the PPC candidate appeared to hedge her bets.

“There are actually several who have prophesied he is a Jehu in Canada. I do not know when, but I believe he will be PM.”