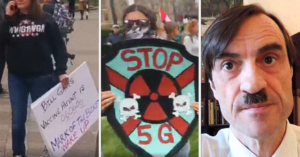 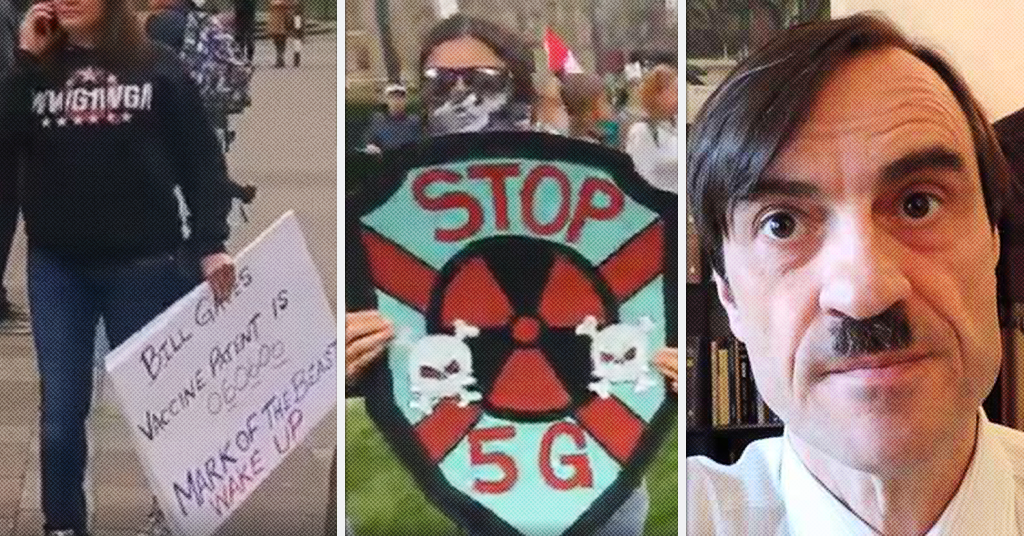 Canada’s Anti-Lockdown Protests are a Ragtag Coalition of Anti-Vaccine Activists, Conspiracy Theorists and the Far-Right

Yes, Canada’s anti-lockdown protests are even weirder than you think

Protests against public health measures aimed at containing the spread of COVID-19 have been popping up across Canada, over the last month.

A number of news reports have suggested the anti-lockdown protesters are mainly concerned about  “the economy.” The organizers of these protests have themselves claimed to be speaking out on behalf of “business owners.”

Yet, even a casual glance at the signs appearing at these protests suggest it’s inaccurate to claim ”the economy” is the anti-lockdown protesters’ main concern.

As previously reported by PressProgress, the protests were originally organized by a mysterious group calling itself “Free North Patriots,” which appeared out of thin air on April 12 and immediately began promoting “peaceful protests.”

The anti-lockdown protests have little to do with the lockdown itself. In many ways, the protests primarily serve as meetups for people who spend their time in some of the weirdest and most extreme private Facebook groups in Canada.

Here’s a closer look a who is showing up:

The New York Times recently described anti-vaccine activists as a “growing force” at American anti-lockdown protests — the same is true in Canada.

Signs railing against vaccines, or accusing Microsoft Windows creator Bill Gates of inventing the coronavirus pandemic as part of a conspiracy to depopulate the world using vaccines, have been among the most frequently recurring messages spotted at anti-lockdown protests in Toronto and Vancouver. 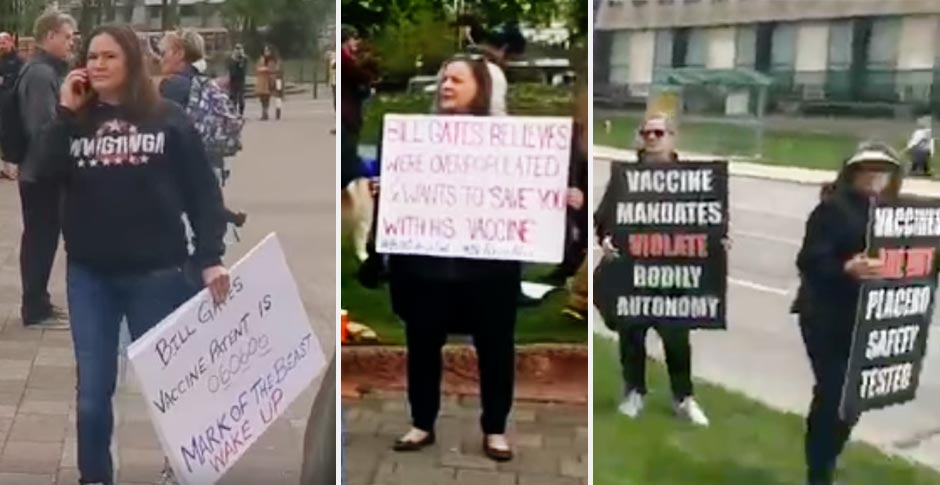 But anti-vaccination activists don’t just show up to protests on their own.

Private Facebook groups, which require permission to join and have been linked to the spread of COVID-19 misinformation, are one of the main recruitment tools being used to promote the protests. 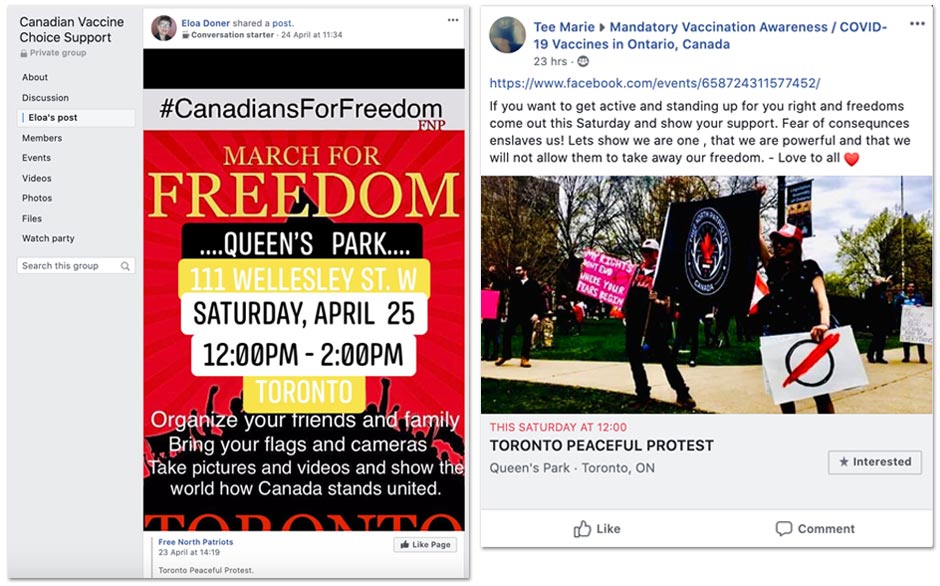 Another protest in Vancouver was organized by an anti-vaccine activist named Susan Standfield-Spooner, who was portrayed by Postmedia as a struggling worker. In fact, Stanfield-Spooner is also quite outspoken about her belief that the pandemic was planned by elites as part of their “forced vaccination” agenda.

In a recent livestream video, Standfield-Spooner bragged that the protests enjoy a “tonne of support on the pages.” She also said she is trying to leverage mainstream media coverage to attract larger crowds at future protests, but admitted it “depends what people are being told on TV.” 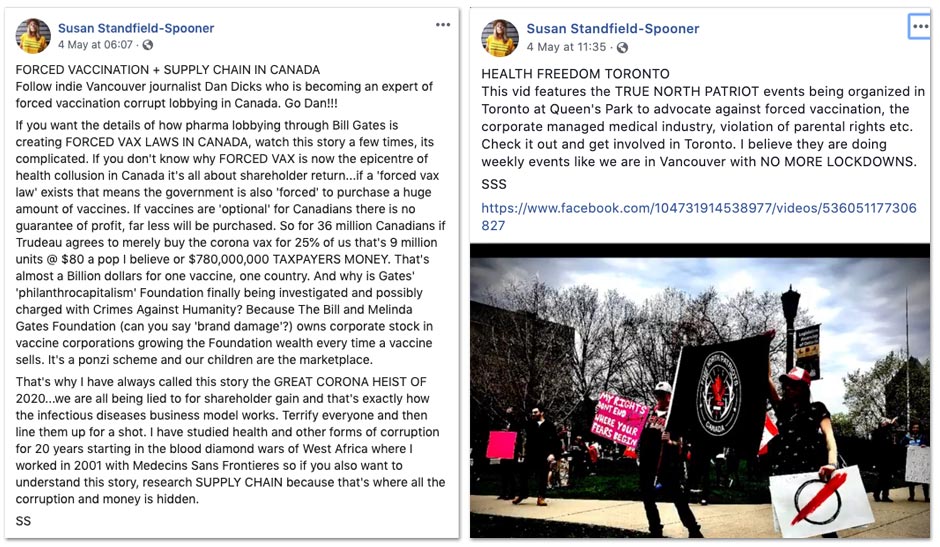 Another wing of the anti-lockdown coalition are 5G truthers — people who imagine there is a link between COVID-19 and 5G cellphone towers.

The conspiracy has inspired arsonists to set fire to 5G towers around the globe — arsonists recently destroyed four 4G and 3g towers in Québec. Prime Minister Justin Trudeau has urged the public to stop setting fire to cellphone towers.

Signs warning about 5G are also a frequent sight at protests — FNP’s lead organizer has promoted a special $115 bracelet sold by a company he’s been associated with that purportedly blocks 5G signals from entering the human body.

The same organizer’s Facebook activity shows he has extensively promoted the protests in various 5G Truther groups on Facebook. 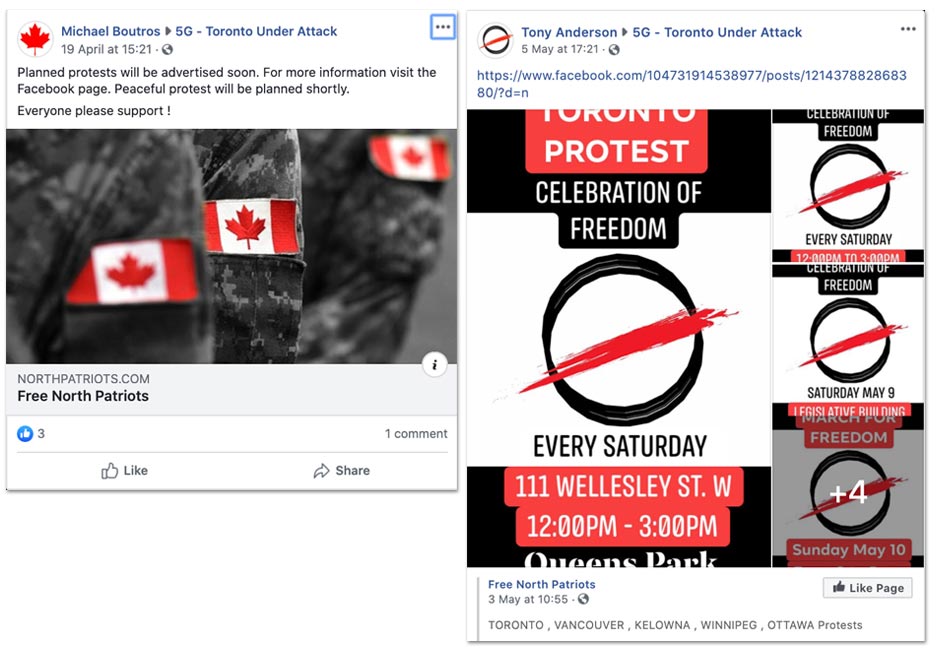 Alongside anti-vaccine activists and 5G Truthers, another group has been speaking out about the lockdown: People who literally believe that Earth is flat.

A string of Facebook events advertising protests in Vancouver are co-hosted by a Facebook user named Bob Wiles and a group called “Flat Earth Vancouver.” The group describes itself as a community set up to “begin public outreach about ball earth lies and many other illusions we face in the world today.”

One outspoken flat earth advocate named Mak Parhar filmed himself at the April 26 protest in Vancouver, where he described COVID-19 as a “bogeyman virus that doesn’t exist” and heckled bystanders on condo balconies as “slaves in their prison.”

As noted by Anti-Racist Canada, Parhar recently made headlines after his yoga license was revoked for falsely claiming hot yoga can cure COVID-19. 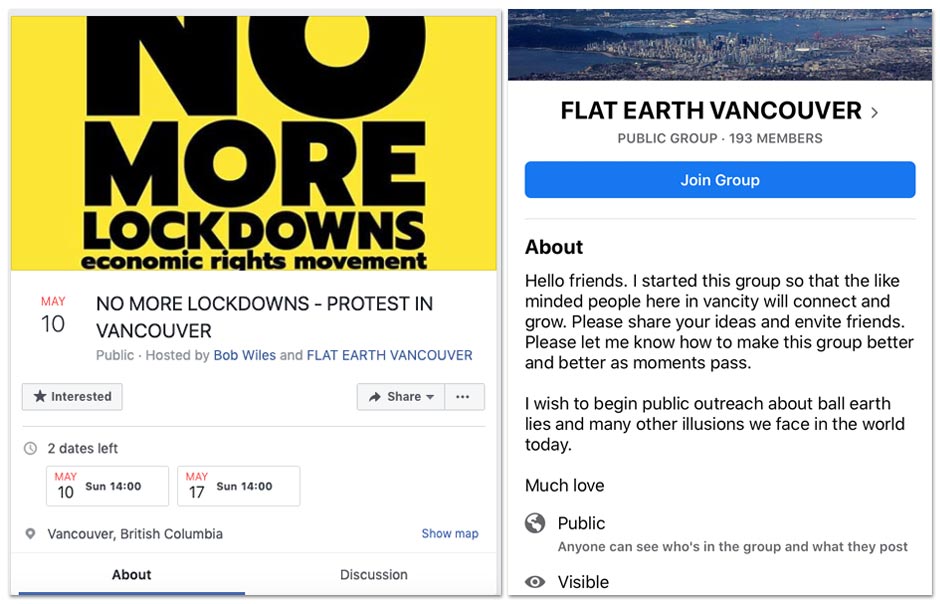 Other participants at the anti-lockdown protests are well-known far-right organizers.

The Yellow Vesters first emerged in late 2018  and take aim at Justin Trudeau, environmental policies, immigrants, Muslims and others. They are entrenched in far-right politics and conspiracy theories about the United Nations.

The Yellow Vesters are an outgrowth of an extensive network of Facebook groups, which anti-lockdown organizers have made efforts to tap into. 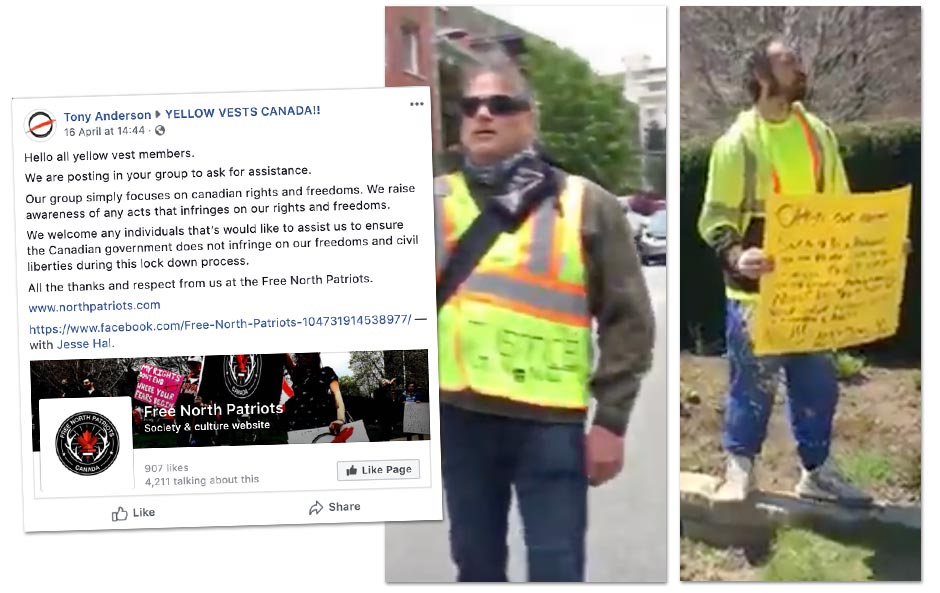 Some individuals connected to the Yellow Vesters appear to show up to just about any event or protest, regardless of the cause.

As anti-racist researchers note, one protester who appeared in an on-location video produced by Rebel Media is a “known entity at far-right protests in Toronto and Hamilton, such as Yellow Vests.”

Lily ripped up a Chinese flag while David Menzies laughed.

Lily is a known entity at far-right protests in Toronto and Hamilton, such as Yellow Vests. She is notoriously anti-Chinese, saying in vlogs that she was upset COVID-19 didn’t kill more and that China should be nuked. pic.twitter.com/VumwjukYcq

In Edmonton, an anti-lockdown protest first organized by FNP was boosted by the leaders of “United We Roll,” — the group behind the heavily-publicized truck convoy from Alberta to Ottawa last year.

“United We Roll” actually began as a Yellow Vest convoy, but later ditched its vests after its association with the Yellow Vesters threatened to derail the convoy.

Ok one of the protest leaders, from United We Roll, has a fire truck and got stuck under the access point to the High Level Bridge causing a backup. @Edmontonsun @edmontonjournal #yeg #ableg pic.twitter.com/wKLwdu1BNE

There is also evidence that some remnants of Maxime Bernier’s People’s Party, a failed attempt at creating a far-right populist party in Canada, have been engaged in the anti-lockdown protests.

Thompson has a well-documented history of promoting anti-LGBTQ views.  She also has said Bernier’s leadership of the People’s Party was fulfilling an ancient Biblical prophecy.

Earlier this week, Thompson demanded on Facebook that the Canadian government defund the World Health Organization on the grounds it has “misled the entire globe on COVID-19” and “forces comprehensive sexuality education and LGBT propaganda in classrooms.” 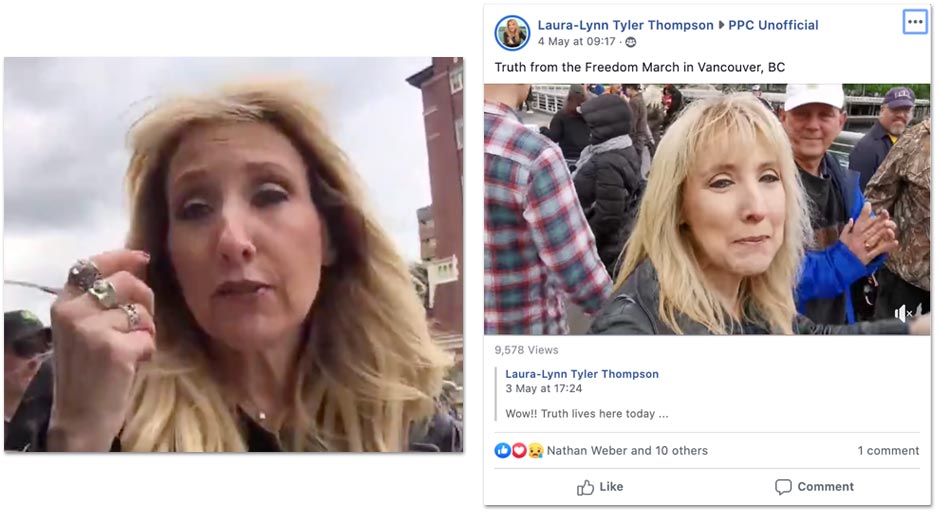 The anti-lockdown protests have also attracted the attention of bonafide Nazis.

Paul Fromm, who has been described by the National Post as “one of Canada’s most notorious white supremacists” and has links to neo-Nazi groups, has also been spotted promoting Free North Patriot events in his circles.

Fromm recently turned up at an anti-lockdown protest in Kelowna.

And then there’s this guy.

Doctors in US hospitals have reported they regularly treat patients who ignored treatment for COVID-19 due to conspiracies they encountered on social media.

Meanwhile, Vancouver police reported a surge in anti-Asian hate crimes, including a woman who was targeted in an unprovoked attack at a bus stop last month.