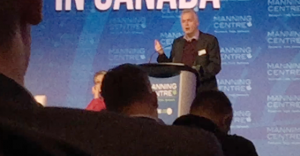 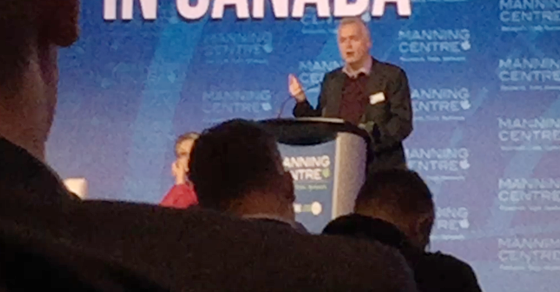 The Manning Centre's "expert on terrorism" has been repeatedly criticized by real experts on terrorism.

This is the Manning Centre’s go-to “expert on terrorism”?

At this weekend’s Manning Centre Conference in Ottawa, one of the right-wing think tank’s “expert” panelists suggested a Quebec City mosque, attacked by a man who held far-right anti-immigration views last month, had links to terrorist entities – a claim that has never been alleged by police or other national security officials.

Thomas Quiggin, an obscure researcher whom the Manning Centre presented as an “expert on terrorism” despite having been widely criticized by recognized experts in the same field, delivered a speech at the 2017 Manning Conference’s panel titled “leading the response to Islamist extremism and its ideology in Canada.”

After acknowledging the attack that left six Muslim congregants dead was “a horrific thing,” Quiggin proceeded to tell the audience that he believes the mosque was likely targeted because it funneled “tens of thousands of dollars” to a “terrorist entity.”

What proof does the Manning Centre’s “expert on terrorism” offer to back up his claims?

According to a January blog post on Quiggin’s website, the so-called “expert” bases his entire thesis on a 1992 phone book, a website that the New York Times recently labelled an “anti-muslim” conspiracy theory blog and a methodology that at times seems loosely inspired by Six Degrees of Kevin Bacon.

If that isn’t a serious red flag, here’s what Maclean’s magazine had to say about the Manning Centre expert’s credentials this weekend:

“Thomas Quiggin of the Terrorism and Security Experts network then rattled through a deck of slides that would have left an uninformed viewer thinking most every mosque in Canada — including the Islamic Cultural Centre in Quebec City, site of the massacre — was funnelling funds to extremist groups … He suggested intelligence officials should have known … that the mosque was supporting extremists, and that the gunman was intending to take his revenge — Quiggin suspects — for that support.”

Plus one national security expert at Carleton University describes Quiggin as a guy “in a basement reading Breitbart.”

The Manning Centre had come under fire before the conference for advertising its panel on “Islamist extremism” with an image of a ticking time bomb.

Disgusting regardless of timing, but following terrorist attack on Quebec mosque & death of six humans, this is abhorrent. #ableg #cdnpoli pic.twitter.com/WslWmDCfXA

If the Manning Centre is interested in “leading the response” to extremism, maybe they could start leading by example?