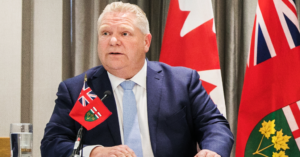 According to the Toronto Star:

To generate revenue, the Star reports, the document suggests the province “market” the opposed online Ontario curriculum to out of province students and examine the feasibility of “selling licensing rights.”

What the government says:  The Ministry of education didn’t dispute the existence of the document.

But it did claim it plans on having Ontario teachers run the mandated online courses “with no plans to privatize them.”

How teachers reacted: “To me it looks like someone is looking at this to save money, not to do what real kids actually need,” said Harvey Bischoff, president of the Ontario Secondary School Teachers’ Federation.

Ford government’s credibility is crumbing: The story is particularly damaging to the Ford government because they have repeatedly insisted their move to mandatory e-learning was exclusively designed to help students — not cut costs.

The ministry responded more details on this were to be released last Fall.