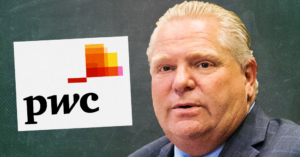 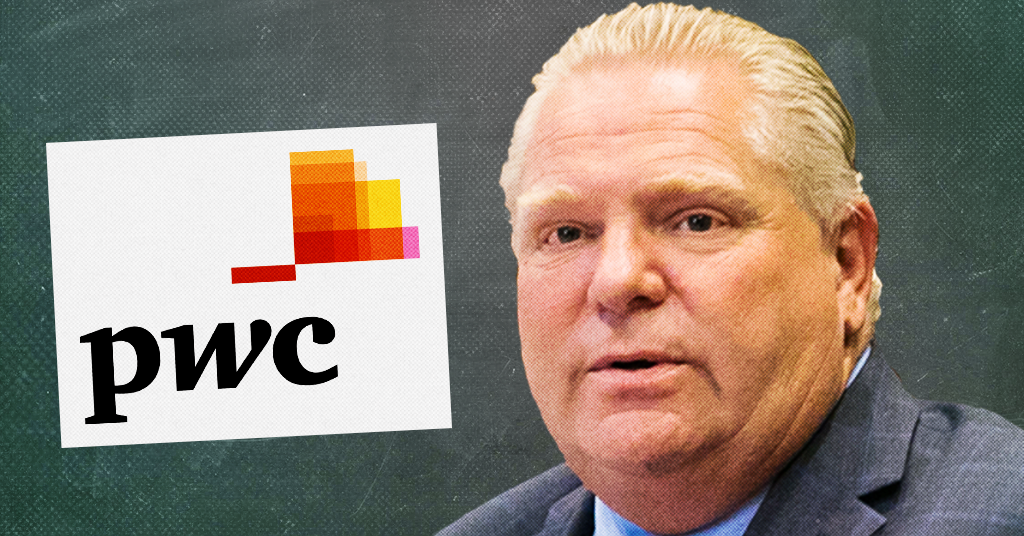 Two of Ontario’s biggest teacher’s unions are calling recent efforts by one of the world’s biggest corporations to do market research on Ontario high school students  “unprecedented” and “alarming.”

Unsolicited e-mails from PricewaterhouseCoopers (PwC) appeared in the inboxes of guidance counsellors at Ontario high schools last month, informing them the firm is conducting research into the “online education market in Ontario.”

Guidance counsellors were offered $50 Tim Hortons gift cards in exchange for insider information on student behaviour, including “how students select courses” and “what criteria are important to students.”

According to a copy of the e-mail obtained by PressProgress, PwC told Ontario guidance counsellors their research is connected to a “recent provincial government announcement that online education will become compulsory starting in 2020.” 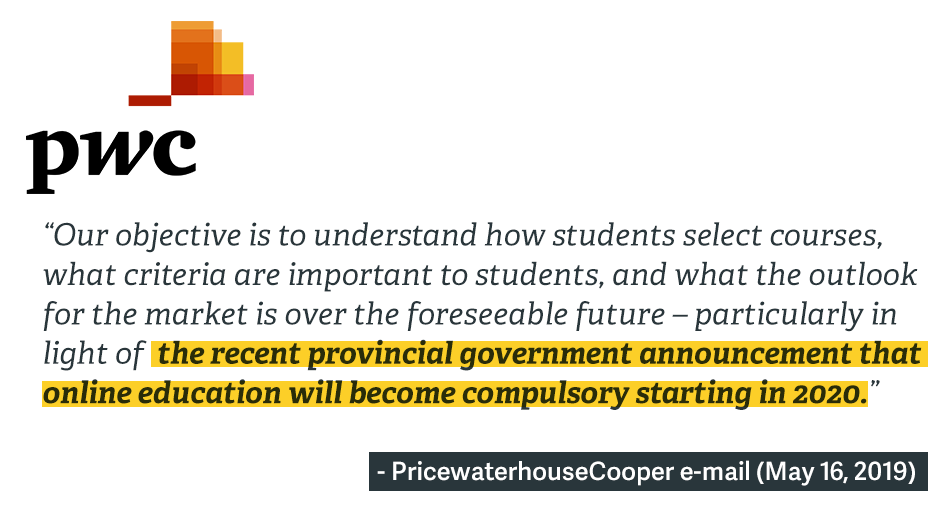 In a statement to PressProgress, a spokesperson for PwC confirmed the firm was conducting research into Ontario’s online education market “on behalf of a client,” but declined to name the client or disclose any details about their research.

The PwC spokesperson offered no response to questions from PressProgress asking specifically how they obtained the e-mail addresses of guidance counsellors and whether any personal data had been shared with third parties.

PwC’s e-mail states they are “not affiliated with the government or any political party” and assured recipients their responses would be “recorded anonymously.”

A Ministry of Education spokesperson told PressProgress it was “not involved in the PwC market research survey on online education in Ontario” and said it is up to  “individual school boards” to decide whether it is appropriate for staff to participate.

Toronto’s Catholic District School Board told PressProgress it was aware the e-mails may have been sent to guidance counsellors at its high schools.

A spokesperson said PwC did not request permission from the TCDSB to directly contact its staff or conduct market research on their students. The board said its internal policies require external organizations to fill-out applications so they can be “vetted” by school board officials first.

Both the Ontario Secondary School Teachers’ Federation (OSSTF) and the Ontario English Catholic Teachers’ Association (OECTA) representing educators in the province’s public and separate school boards have advised their members against cooperating with PwC. 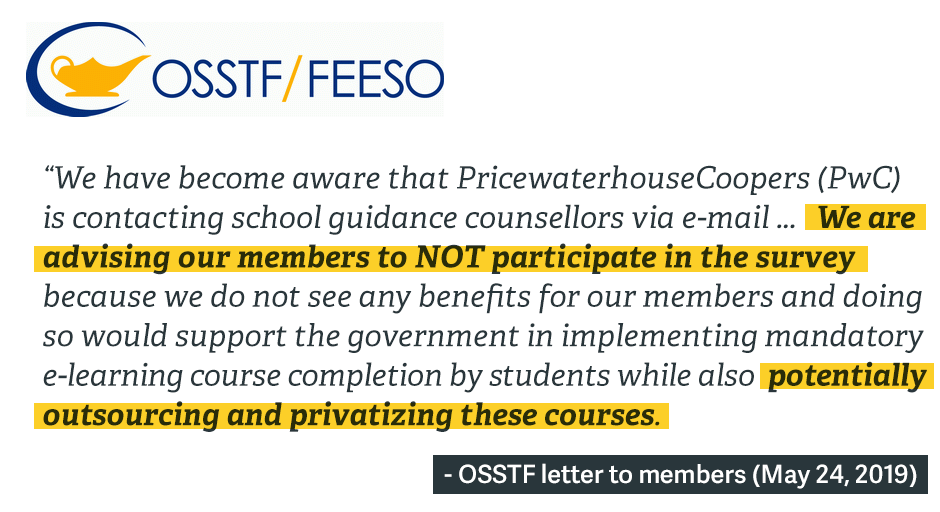 “I’m not aware of another example of this occurring,” Bischoff said.

OSSTF is warning its members that PwC’s research shows the Ford government is considering “potentially outsourcing and privatizing” online courses.

“PwC doesn’t do market research for any other reason than that there’s potential for turning a profit,” Bischoff said. “They’re not doing it in the interest of public service.”

“They’re seeing clearly that this government is creating opportunities for those who are looking to get their hands on the public purse.”

Bischoff’s concerns are echoed by OECTA President Liz Stuart, who is also advising its members “against lending any legitimacy to it by participating in the survey.”

“Teachers already have serious concerns about what mandatory e-learning will mean for student learning and achievement,” Stuart told PressProgress. “That business interests see an opportunity to be involved is alarming.”

Stuart is concerned by the Ford government’s vague plan to “centralize” e-learning,  suggesting the plan sounds like like an “American-style attempt to privatize teaching and credit delivery in Ontario’s public education system” and may raise questions about whether Ontario-certified teachers would be teaching the online courses.

Stuart said Ford’s government needs to “make clear that there will be no role for private businesses in the planning or delivery of courses.”

Asked if the Ministry of Education is considering privatizing or outsourcing the delivery of online courses, a spokesperson said that “more information will be shared in Fall 2019.”

“The Ministry will work with school boards and other sector partners to understand design and implementation options for centralized e-learning,” the spokesperson told PressProgress.

In March, Education Minister Lisa Thompson announced that starting in 2020, Ontario high school students would be required to take four online courses and that the Ford government will also “centralize the delivery of all e-learning courses.”

Professional educators have voiced concerns about replacing face-to-face teaching with online courses, noting research shows many students struggle with online courses while Internet access can vary based on income and geography.

Thompson has herself struggled to explain the logic behind the change, responding to critics by describing the online learning as the “reality of today” and insisting her government is 0nly “embracing technology for good.”

Critics suggest the move is really about cutting costs and getting rid of teachers  — the OSSTF estimates the Ford government is getting ready to eliminate staggering 22% of high school teachers in the province.