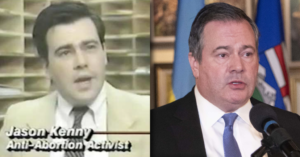 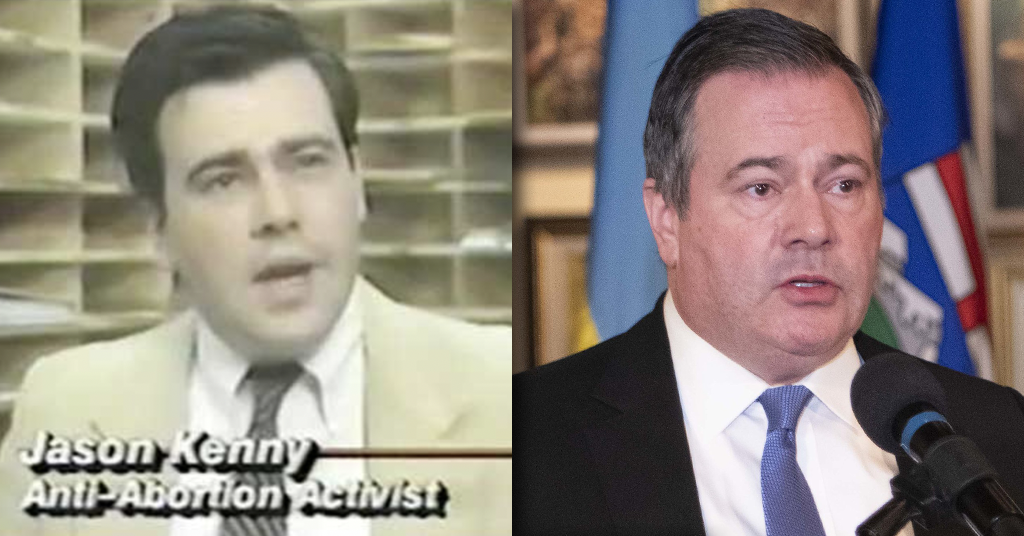 As the United States faces the overturning of Roe v. Wade, Jason Kenney is now attempting to distance himself from the abortion debate.

In fact, Kenney has been attempting to rewrite his own history of social conservative activism for some time. Just last week, Kenney appeared on a right-wing American podcast hosted by a pair of Washington, DC lobbyists, during which time he made surprising claims about his college days.

“I was a bit of a young lefty,” Kenney told the hosts. “I went to college down in San Francisco, a Jesuit school, not exactly the capital of conservatism.”

What Kenney neglected to mention is his long history of championing social conservative causes, including campaigns he led against abortion and gay rights.

In case you were looking for it, here’s the old clip of “anti-abortion activist” Jason Kenney on CNN.

Kenney had been publicly opposing a “free speech” policy that allowed a women’s group to advocate for reproductive rights at his university campus.https://t.co/VqRU11Con8 pic.twitter.com/0jG4L1QERO

Young Kenney arrived at the University of San Francisco in the fall of 1987. Within months, he was already clashing with the school’s administration over its “secular drift.”

Kenney was enrolled in the Saint Ignatius Institute, founded the previous decade to combat the spread of liberal apostasy at USF by a controversial far-right priest named Father Joseph Messio.

Though he hadn’t yet converted to Catholicism, Kenney’s early campus activism included instituting a “traditional catholic prayer” at the start of student government sessions, which school officials opposed on the grounds it could foster bigotry.

In 1989, Kenney had become president of the campus pro-life group and began organizing against a historic ordinance allowing same-sex couples to register as “domestic partnerships” which entitled same-sex couples to rights enjoyed by heterosexual couples, including the same hospital visitation rights and bereavement rights.

The law, which came about in response to the AIDS epidemic, was overturned by a petition, which Kenney considered one of his biggest political accomplishments according to leaked audio that surfaced in 2018.

Speaking to a group of Canadian Alliance supporters in 2000 Kenney took credit for the petition:

In USF’s student newspaper, the Foghorn, Kenney argued against “free speech” on campus for women’s rights groups, reasoning it was a slippery slope that would lead the school to give a platform to the KKK, pedophiles and the “Church of Satan” too.

Kenney pushed his brand of social conservatism during his days a Reform MP, when he mused openly about invoking the “notwithstanding clause” to block gay rights in Alberta.

Kenney himself claims his position on abortion has been “consistent since I first ran for Parliament in 1997,” and boldly alleges that “in my 20 years in Parliament I haven’t given a speech about this, let alone proposed a motion or a bill.”

However, this statement conflicts with his record as a federal MP:

• In 2012, Kenney voted in favour of Motion 312, a failed bid to redefine Canada’s legal definition of a human being, viewed by many as an attempt to reopen the abortion debate.

• Kenney voted in favour of Motion 83, a failed bid to examine “the medical necessity of abortion.” Kenney delivered a speech in the House of Commons arguing many abortions are “medically unnecessary” procedures and that with “scarce and shrinking dollars” for healthcare, tax dollars should be spent on MRI machines.

• Kenney delivered a speech in the House of Commons claiming “the right to life” is “inalienable” because constitutional rights are “granted to us by our Creator.”

In fact, as a Reform MP, Kenney once showed up at Revenue Canada’s offices and gave bureaucrats an earful over their decision to revoke the charity status of an anti-abortion group that had been educating students on the virtues of chastity – a practice Kenney argues is consistent with “the teachings of my church.”

Since his move to provincial politics Kenney has been surrounded by supporters in the anti-abortion movement like the group RightNow, which secretively campaigned to support 52 anti-abortion candidates within his new party.

Confirmed among these was Adrianna LaGrange, the former president of the anti-abortion group Red Deer Pro Life whom Kenney later appointed Education Minister.

RightNow founder Alyssa Golob has previously written at length praising “Jason Kenney’s perfect pro-life voting record” and declaring that “Kenney is arguably one of the highest profile pro-life politicians Canada has ever had.”

These anti-abortion groups were staunch allies of Kenney, aiding him in his mission to take over the Alberta Progressive Conservatives to merge them with the farther right Wildrose Party, encouraging their members to buy PC memberships in support of his candidacy.

While in opposition, under his leadership UCP MLAs walked out of a vote on abortion clinic bubble zones which restricted protesting and taking photos within a certain distance of these clinics.

In 2019, Kenney borrowed from Doug Ford’s playbook by drafting a policy to create a safe space for groups that advocate for the oppression of women and marginalized people on Alberta campuses.

More recently, anti-abortion activists praised Kenney once again by allowing social conservatives to opt out of vaccines they believe to derive from aborted fetuses.

According to Campaign Life Coalition, Kenney has a perfect voting record on “life and family issues,” voting on a number of occasions in favour of legislation criticized as attempts to undermine the reproductive rights of Canadian women.

When details of his activist past surfaced, Kenney claimed his views have evolved since his time in San Francisco in the 80’s, when he helped lead the fight to block same sex couples from visiting their dying partners, and intimidated a women’s group on campus for supporting abortion rights, but his record of social conservatism has stayed consistent since.