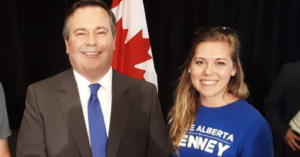 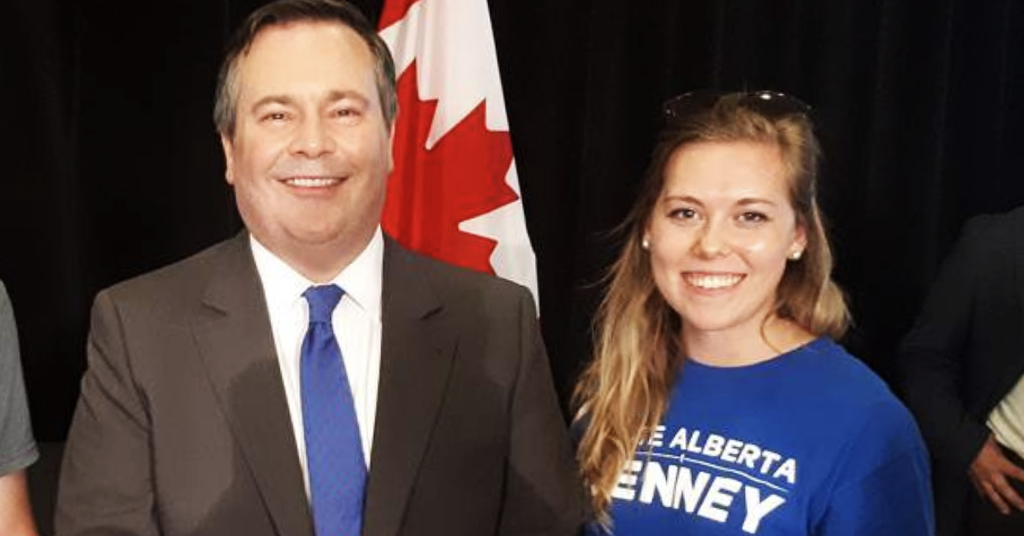 Catherine Gallagher, a Conservative staffer based in Ottawa, started her political career working under Jason Kenney when he was Minister of National Defence and has close ties with members of Kenney’s inner-circle.

She’s the new lead on an effort to nominate “52 pro-life candidates” to stand in the next election, according to an e-mail blast from the anti-abortion group RightNow.

RightNow is a hardline social conservative group that campaigned for Kenney during the UCP leadership race and is working behind-the-scenes to quietly install anti-abortionists into key positions within conservative parties across Canada.

The organization has also received support and training from the Leadership Institute, a right-wing training organization that is funded by groups connected to the Koch Brothers donor network.

“This is Catherine,” reads the e-mail from RightNow.

“She’s our latest addition to the RightNow family in Alberta for the summer. She’s a former political staffer, an experienced campaigner and a solid pro-life advocate.”

According to the e-mail, Catherine will spend July and August working to “help candidates in the Calgary area” as the UCP holds nomination meetings.

In addition to her time working for Kenney in Ottawa, Gallagher most recently worked as a constituency assistant for Conservative MP David Sweet, a former president of Promise Keepers Canada, a controversial evangelical men’s group, who has publicly criticized homosexuality and abortion.

Gallagher also has very close ties with Peter Bissonnette, Kenney’s trusty executive assistant. Gallagher and Bissonnette spent time together on Parliament Hill and are both alumni of the tiny Our Lady Seat of Wisdom College located outside Ottawa – said to be a favourite spot to recruit young Kenney loyalists.

Kenney’s assistant has his own history of anti-abortion activism.

Bissonnette, who also has ties to RightNow’s leadership, was previously identified as a member of the anti-abortion group “Show The Truth,” participating in an obscene 2013 demonstration in Beamsville, Ontario that featured “large photos of bloody and dismembered fetuses” and reportedly angered local residents. Kenney is already experiencing “friction” as his party holds nominations to select candidates for next year’s provincial election, something that will no doubt escalate as RightNow works to stack UCP nomination meetings with anti-abortion voters.

RightNow goes on to explain that they’ve “been able to identify over 52 pro-life candidates running out of the 87 ridings in the province” and Gallagher’s “full-time” organizing will help “get them elected.”

The e-mail lists 21 of “the more urgent ridings” where they need “10 volunteers for each pro-life candidate” to help them stack nomination meetings. While RightNow does not specifically name which candidates they’re backing, it’s noteworthy that a handful of the listed ridings are held by incumbent UCP MLAs.

Also included in the e-mail from RightNow is a photo of UCP finance critic Drew Barnes canvassing alongside anti-abortion activists, including RightNow founder Alissa Golob.

Golob has previously written at length praising “Jason Kenney’s perfect pro-life voting record” and declaring that “Kenney is arguably one of the highest profile pro-life politicians Canada has ever had.”