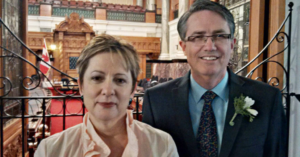 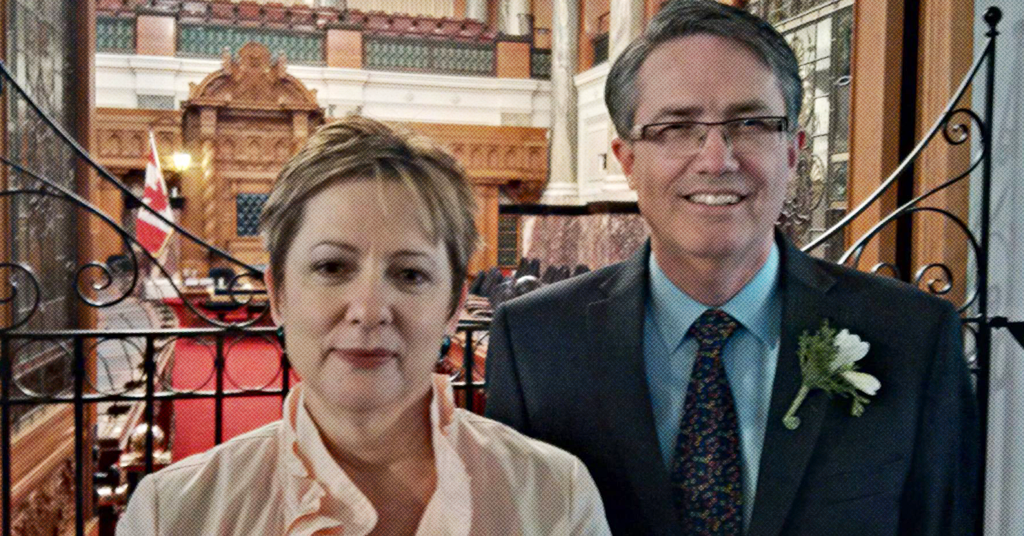 Susan Mathies resigned Monday as president of BC Liberal MLA Laurie Throness’ Chilliwack–Kent riding association after PressProgress asked the party to verify the authenticity of a series of anti-LGBTQ Facebook postings.

“The BC Liberal Party will continue to work hard to advance inclusion, diversity, and equality for all British Columbians,” Wong added.

Throness, an outspoken social conservative, sent his party into a tail spin last month after he ignored party leader Andrew Wilkinson and pledged to continue using tax dollars to advertise in an anti-LGBTQ magazine. The BC Liberals were ultimately banned from both the Vancouver and Tri-Cities Pride Parades after failing to take action against Throness. 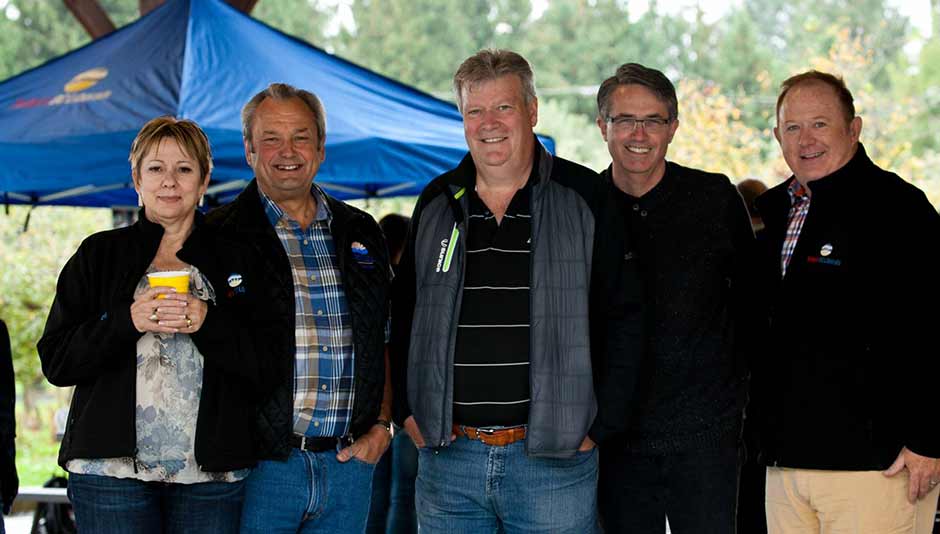 Mathies, who previously served as Throness’ campaign manager in the 2013 and 2017 provincial elections, has shown an extensive pattern of posting on anti-LGBTQ themes in recent years.

In one example, Mathies shared an article from a social conservative blog claiming that taking children to Pride parades is a form of “child abuse,” because they will see “public nudity” and “the genitals of adult men.”

In the comments, the ex-BC Liberal riding president made an unspecific claim that police have issued a “public warning” about “men exposing themselves in public” at Pride parades.

“And yet this is celebrated?” Mathies asked. “Parent(s) intentionally take their children to view this behaviour? Screwed up world.”

In another comment, Mathies wrote: “Not only kids attending (Pride parades) are exposed to public lewd behaviour but it’s shown on mainstream news and online.”

“Not knocking the entire parade but parts are obscene.” 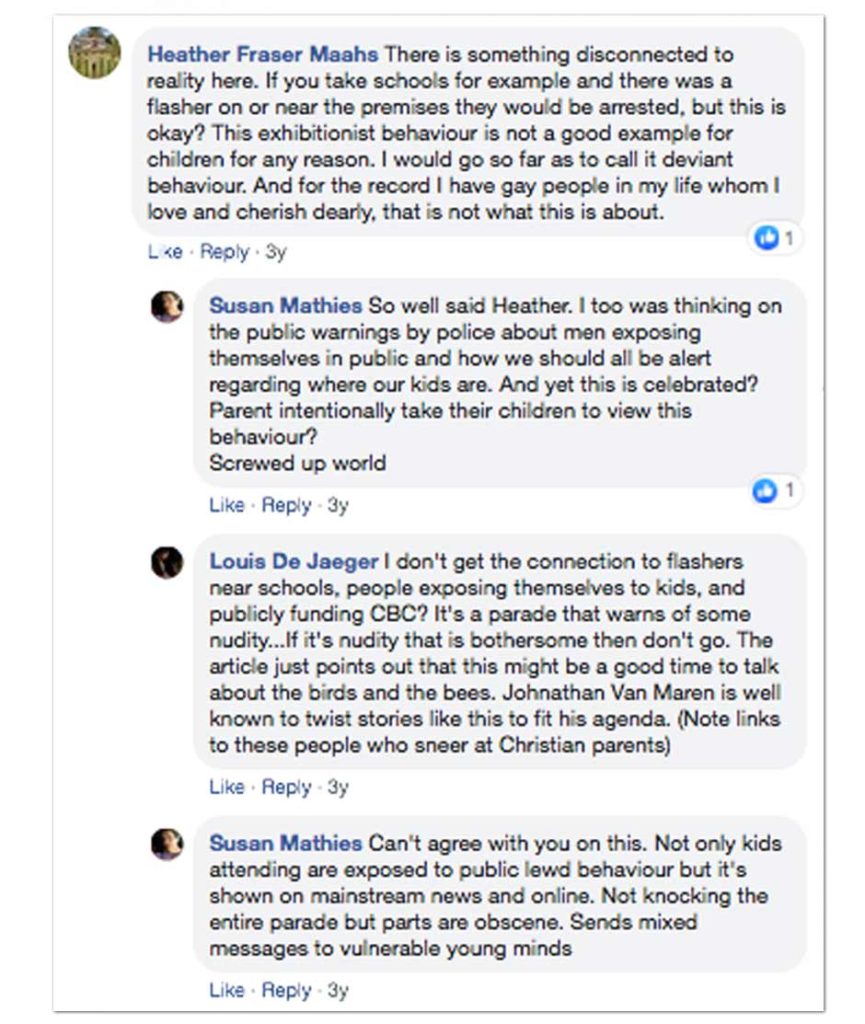 In a 2019, Mathies called a CBC Kids documentary about drag an “abomination,” noting it was “another reason I loath Trudeau and his government.” She also railed against the “Gaytivity,” a scene depicting two Josephs praying over baby Jesus — the ex-BC Liberal riding president called it “disgusting.”

Several other posts also take direct aim at SOGI 123, an educational program designed to counter anti-LGBTQ bullying in BC schools.

One post shared by the ex-BC Liberal riding president, originally created by the Canada Christian Lobby, quotes a SOGI learning resource stating: “Some people are gender fluid and their gender changes on different days and weeks.”

“People need to be aware of what their children are being told,” the ex-BC Liberal riding association president warned. 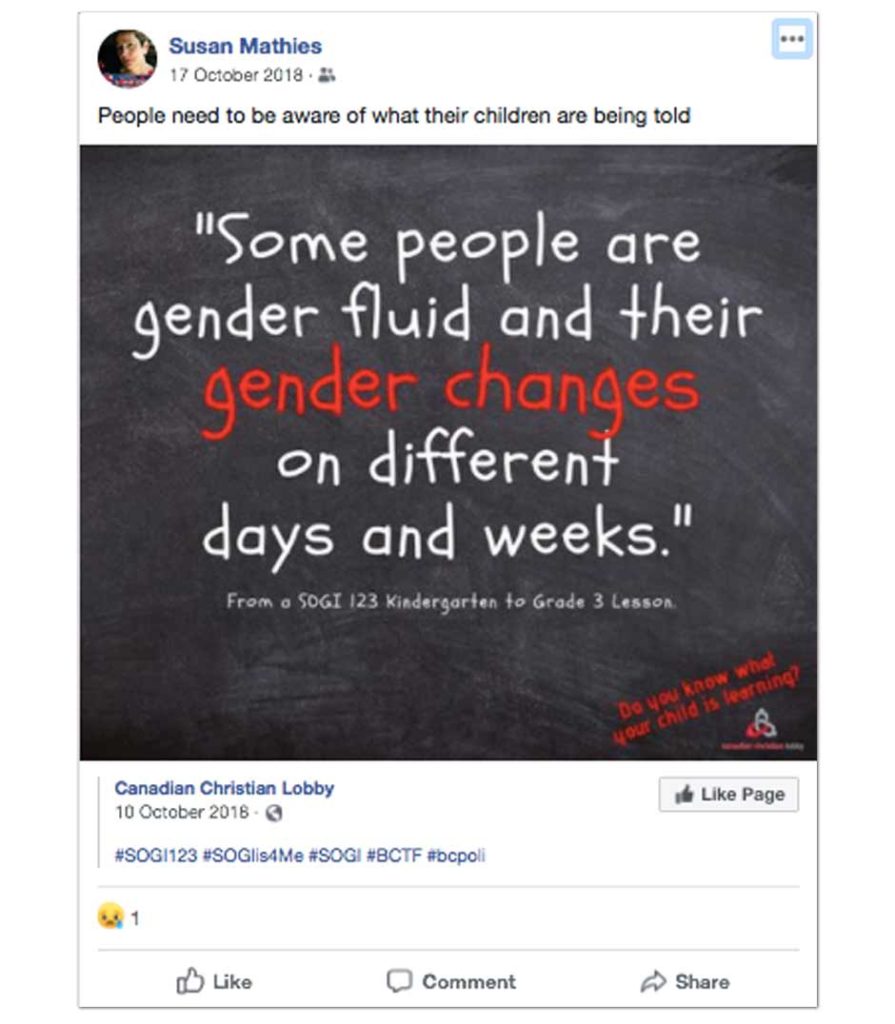 In response to questions about whether he supported the views expressed by his riding president, the BC Liberals supplied PressProgress with a statement attributed to Throness stating that he loves all his neighbours, “including LGBTQ people”:

“My faith teaches me to love my neighbours — including LGBTQ people, people of all races and ethnicities, and people of all faiths. Love, acceptance, and inclusion are fundamental to my faith, and to my political beliefs.

I will continue to work toward a British Columbia where everyone, regardless of their faith, heritage, sexual orientation, or gender identity is welcomed and cared for.”

Despite his statement, Throness has consistently opposed policies to protect British Columbians from anti-LGBTQ hate and discrimination. Throness has been an outspoken critic of SOGI-123 and accused the “powerful LGBT movement” of not being “tolerant” of Christians.

Earlier this year, Throness thanked Mathies for serving as his riding president for the last seven years.