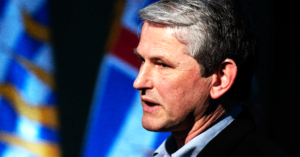 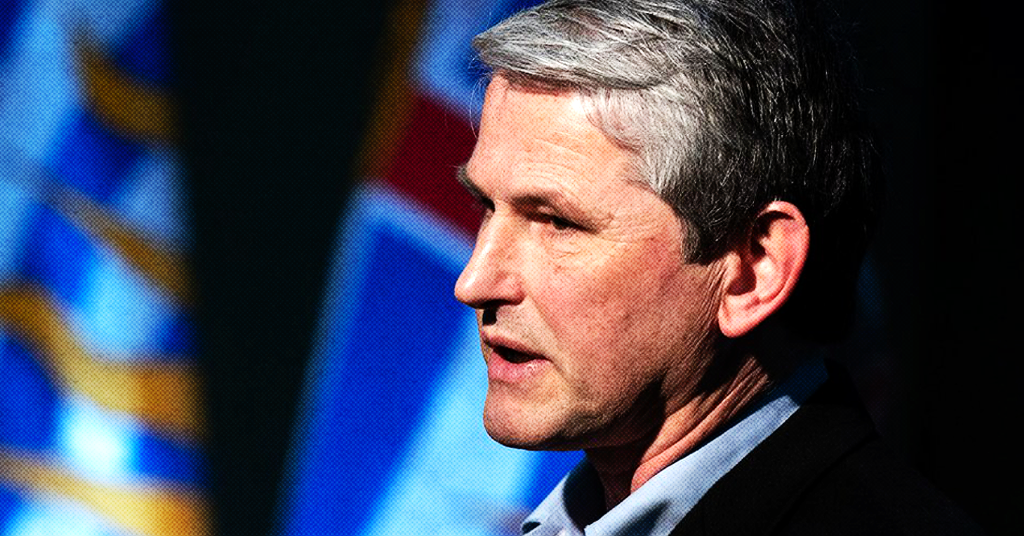 BC Liberal MLAs are billing British Columbia taxpayers thousands of dollars to run ads in a hardline social conservative magazine that publishes articles railing against topics ranging from abortion to pornography to bans on conversion therapy.

In total, 14 BC Liberal MLAs — over one-third of the party’s caucus — have already expensed more than $1,700 over the last 18 month on ads in The Light Magazine.

That amount is likely higher as a dozen BC Liberal MLAs have appeared in ads in recent months but MLA expenses for 2020 have not yet been disclosed. While MLAs receive a budget to place ads in local newspapers to promote constituency work, the BC Liberal ads in Light Magazine appear alongside anti-LGBTQ content.

However, the magazine also promotes highly controversial views, including something called the “West Coast Christian Accord” on “gender identity and human sexuality,” which condemns “homosexual, polygamous, or polyamorous” marriages and those who “adopt a homosexual or transgender self-perception.”

One $503 ad from the magazine’s October 2019 issue features a photo of BC Liberal leader Andrew Wilkinson accompanied by a special Thanksgiving greeting. 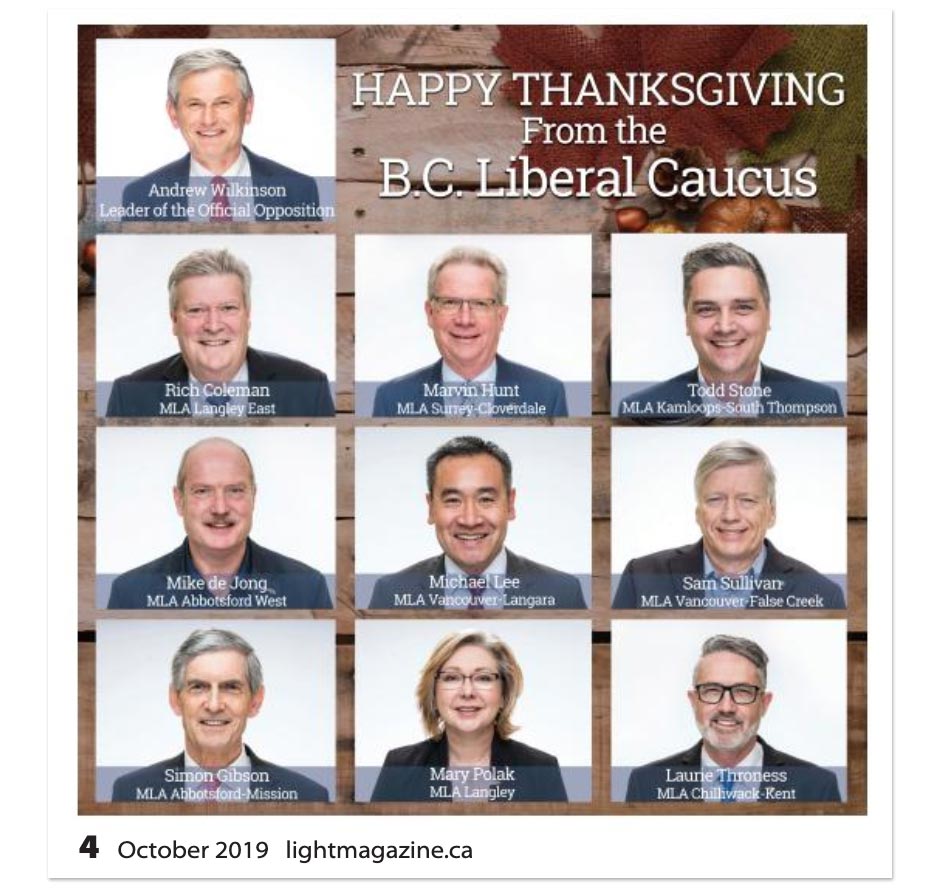 Conversion therapy is an abusive and scientifically discredited practice that attempts to ‘cure’ gay people.

According to author Danielle Martell:

In the magazine’s November 2019 edition, the same author describes Medical Assistance in Dying as a “barbaric practice” in an article discussing the takeover of the Delta Hospice Society board by a group of social conservatives.

“May God be our defence in defeating this culture of death,” the author concludes, a few pages next to an ad promoting BC Liberal MLA Marvin Hunt.

In fact, BC Liberal MLA Simon Gibson even has a monthly column for the magazine, contributing in this year’s January, February, March, April and May editions, offering spiritual advice under the “community” section.

Gibson’s April 2020 column appeared alongside an anti-SOGI 123 article from Laura-Lynn Tyler Thompson, who is a failed People’s Party of Canada candidate and a prominent COVID-19 conspiracy theorist.

“We knew that SOGI (Sexual Orientation and Gender Identity) would have victims and we knew these deceptive resources were making public schools a dangerous place to have our children,” Thompson wrote. “That gift of innocence in a child is what we are called to protect and never abuse.”

On the next page appears a photo of Wilkinson and twelve members of his caucus wishing readers a “happy and blessed Easter.” 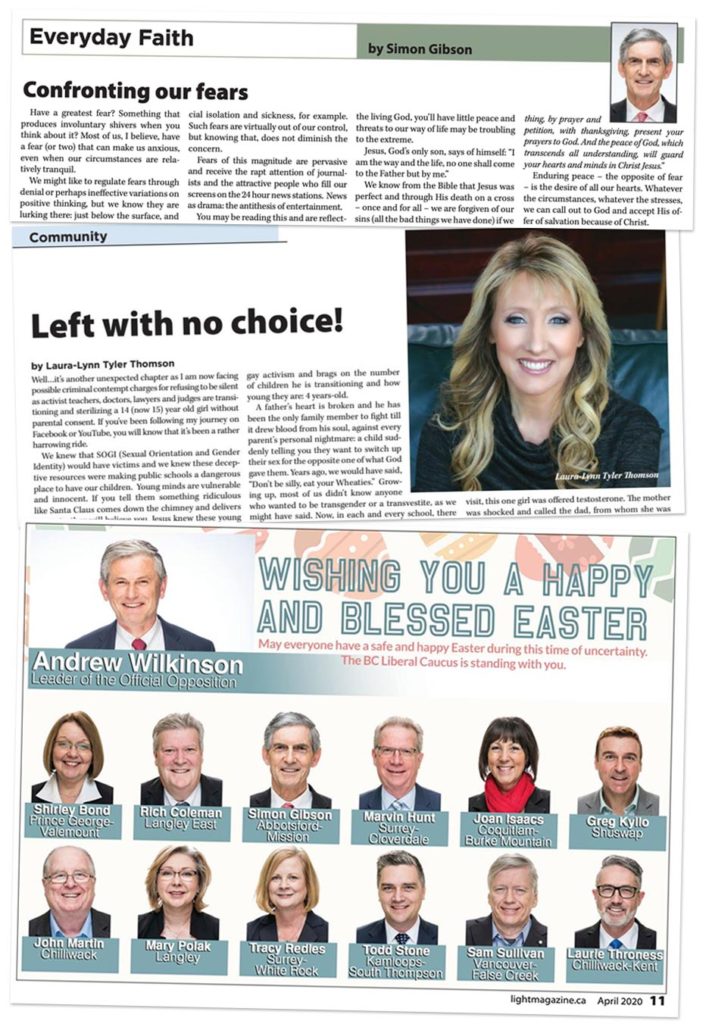 Responding to questions about why the BC Liberal Caucus decided to buy ads alongside such content, a spokesperson from the caucus told PressProgress it was trying to promote itself to the party’s “diverse” base of supporters:

“The communities we represent are diverse and we share messages from our caucus online and with a variety of publications, cultural organizations, local businesses and community organizations and we also recognize the events and celebrations of the many diverse faiths in BC.”

Light Christian Media Inc. did not respond to questions from PressProgress relating to their audience and circulation numbers.

Update: Following publication of this story, BC Liberal leader Andrew Wilkinson tweeted that there is “no room in the BC Liberal Party for homophobia, transphobia or any other form of discrimination.”

Wilkinson indicated the party will be “taking immediate steps to ensure our advertising decisions reflect those values at all times.”

There is no room in the BC Liberal Party for homophobia, transphobia, or any other form of discrimination.
Going forward, we are taking immediate steps to ensure our advertising decisions reflect those values at all times.