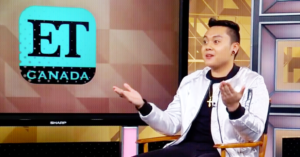 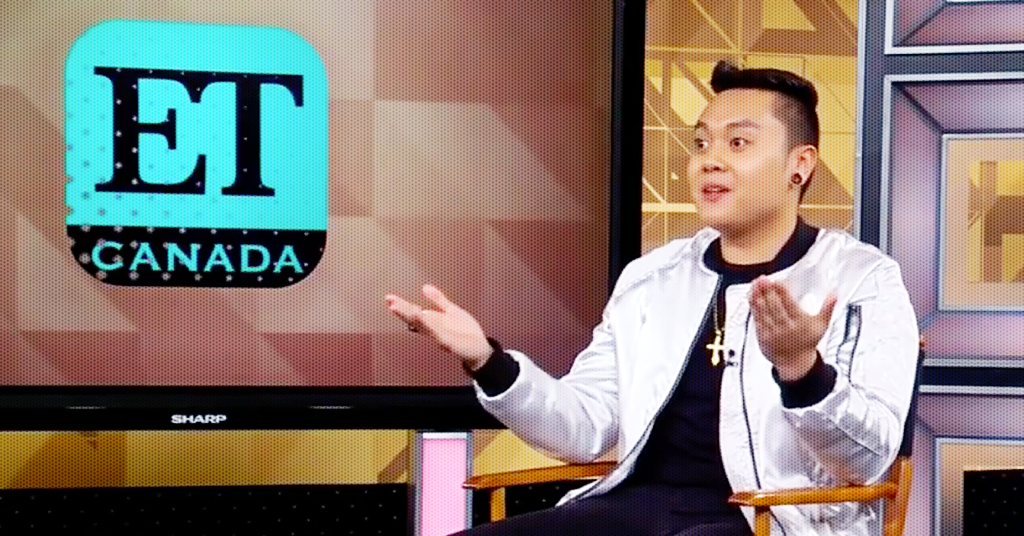 Raymond Ligaya might not seem like the kind of person one would expect to run a Facebook page that has been flagged by major news organizations around the world for spreading toxic, far-right conspiracies and disinformation.

After all, Ligaya, a twenty-something Instagram influencer and recording artist who has opened for acts like Nelly and Wu Tang Clan, has forged advertising deals with major corporate brands like McDonald’s, Coca-Cola, Scotiabank, Manulife, Under Armour, Bell Media Samsung, Hewlett-Packard, Best Buy, Post Cereral as well as Cadbury Chocolates.

But a new investigation by PressProgress confirms that Ligaya, who also goes by the alter-ego “Mansuki,” runs a Facebook page that pushes far-right conspiracies linking Canadian Prime Minister Justin Trudeau to George Soros and “pedophiles.” 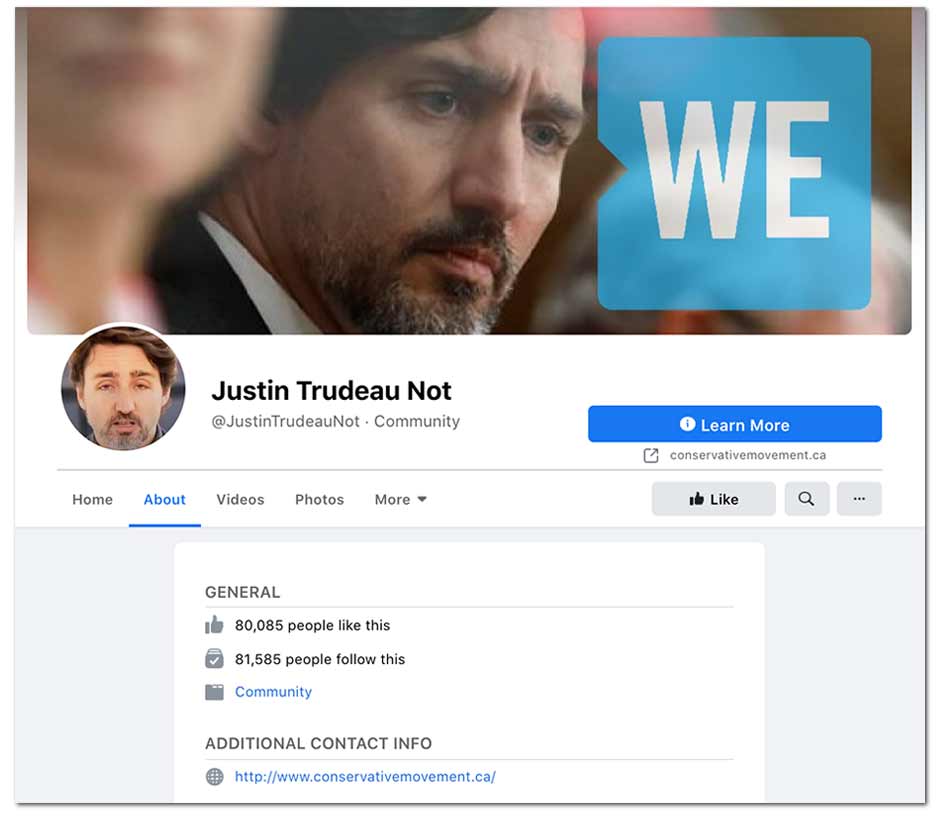 Launched in December 2016, the Facebook page “Justin Trudeau Not” counts 80,000 followers, making it one of Canada’s biggest conservative-leaning pages just behind a network of right-wing pages run by Canada Proud’s Jeff Ballingall.

“Justin Trudeau Not”  lists no names or contact info, but in an interview this week, Ligaya admitted to PressProgress that he personally runs the page.

“I’m part-owner of that Facebook page,” the Instagram influencer told PressProgress. “It’s me and a bunch of other people,” he said, adding that he “recently came into that to help with promoting.”

“There’s a whole team that we have,” Ligaya explained. “They just send articles, if it’s something intriguing then we post it.”

The page has failed not one but two separate fact-checks by Agence France-Presse. In 2018, the international news agency debunked a “Justin Trudeau Not” meme insinuating that the Canada’s Prime Minister had converted to Islam.

More recently, in June 2020, AFP debunked a claim circulated by the page falsely presenting a quote from a satirical website as fact. It claimed Justin Trudeau blamed seniors for undermining climate change policies.

Ligaya said he was unaware that his page promotes false and conspiratorial content, but he also denied that he had any moral responsibility to ensure the information he’s broadcasting to 80,000 people is accurate.

“Well, it’s not my fault,” Ligaya said. “At the end of the day, I just find it on the Internet, and if it’s there, might as well push it.”

“Everybody shares random things on the internet,” he added. “The Internet is free for anybody, so they can promote whatever they want,”

“My responsibility is just to post whatever is on the internet, and if it’s a funny meme, then people will find it hilarious.”

As of late, “Justin Trudeau Not” has been promoting “conservativemovement.ca,” a website that describes itself as a “privately owned news blog corporation founded to provide the latest sourced Conservative news for Canadians across the internet.”

Corporate records obtained by PressProgress list Raymond Ligaya of Woodbridge, Ontario as the company’s sole director. The website’s registration records also list the same name and address, along with an email linked to Ligaya’s record label. 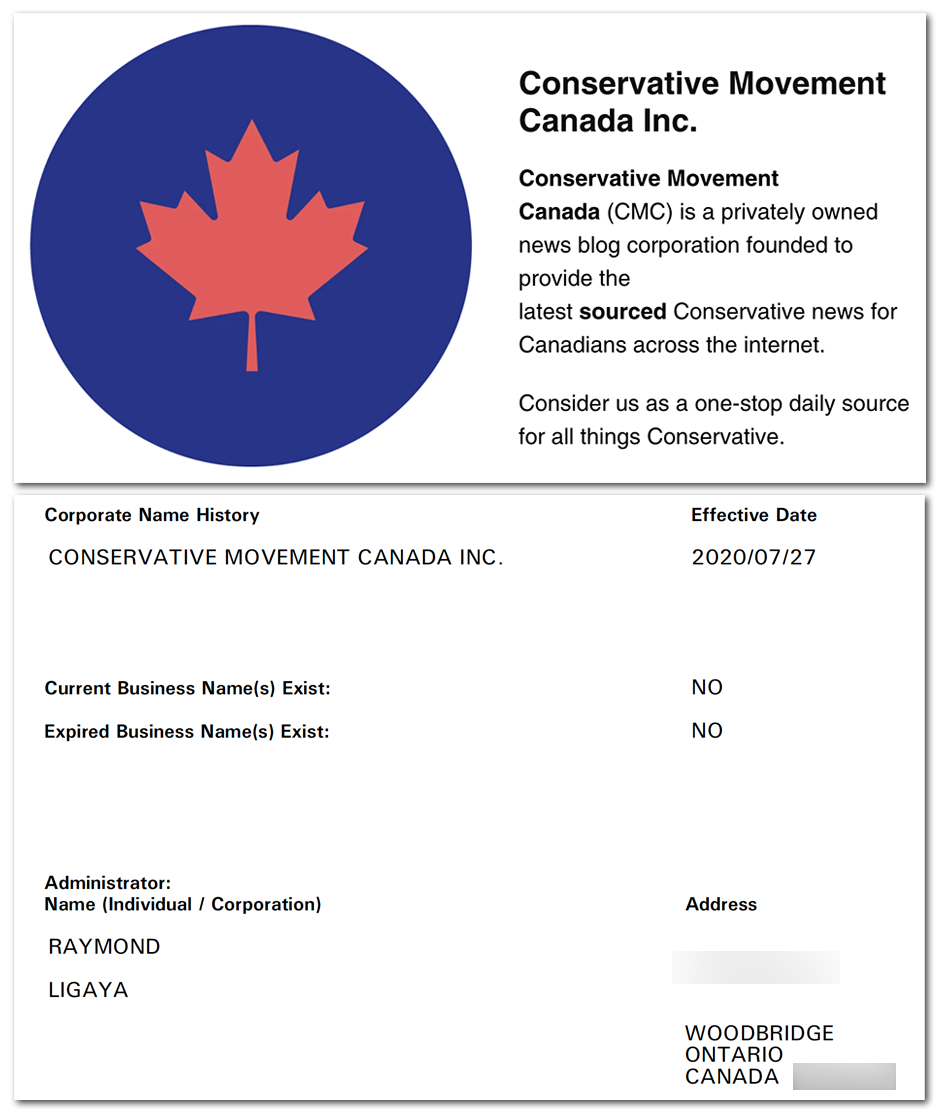 In the days following the US election, “Justin Trudeau Not” began posting memes targeting a voting machine company that has figured in conspiracies spread by outgoing lame duck President Donald Trump and many of his supporters.

(MakeWay, formerly known as Tides Canada, confirmed to PressProgress that they never shared office space with the company and, in fact, moved out of the building which houses dozens of unrelated tenants over a year ago).

Another recent meme falsely claimed the company was responsible for a “glitch” that caused votes for Trump in Michigan to be transferred to Biden. The meme features an image of Trudeau lifting a mask to reveal he is actually Soros. 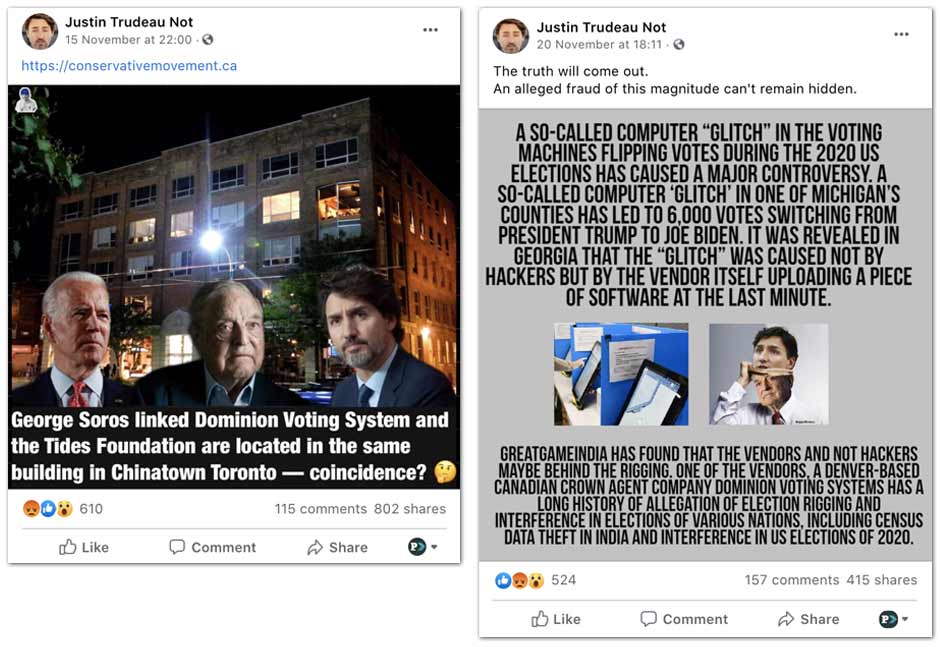 Other recent memes echo conspiracies frequently peddled by anti-vaccine activists and the delusional followers of QAnon.

One meme posted last week suggested Trudeau is using “the COVID-19 agenda to control the entire population with lockdowns” and plans to “begin the enforcement of mandatory vaccinations.” The meme claims Trudeau is building “isolation centres for those who refuse vaccinations or disobey government orders.”

Another meme earlier this month suggests politicians should be given the COVID-19 vaccine first, explaining that “if they are safe, the vaccine is good … but if they die, the country is safe.” 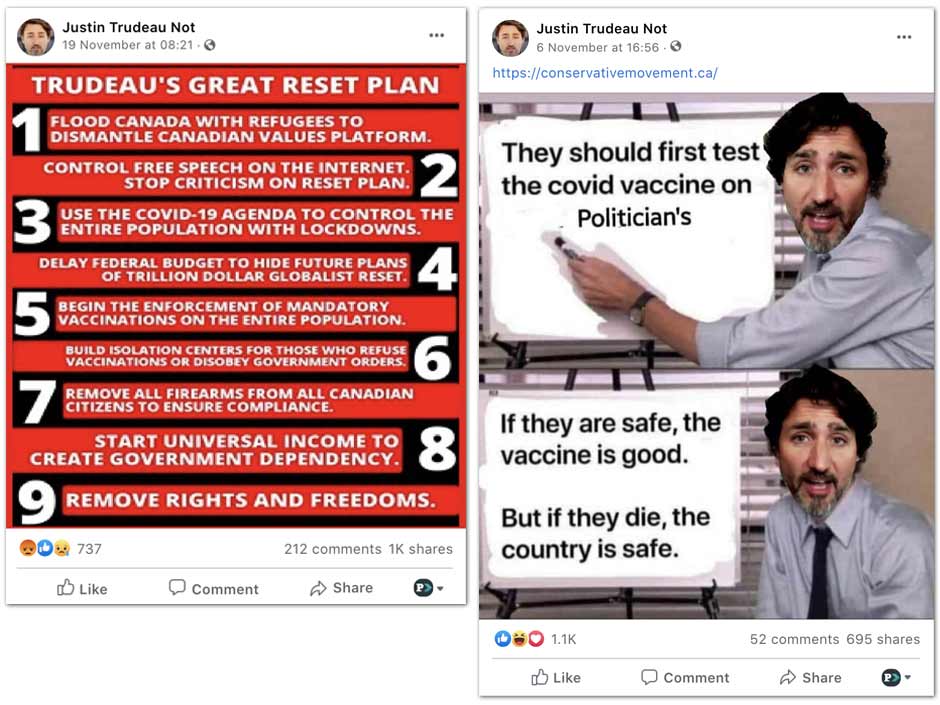 Ligaya said he did not personally post those memes but is cagey about whether the memes reflect his own beliefs.

“I believe what other people believe,” Ligaya told PressProgress. “Everybody has different opinions on things.”

He acknowledged the idea that the COVID-19 pandemic is being used to control the population is “definitely a conspiracy,” but added: “Who knows? No one knows.”

Another post features an image of Trudeau alongside text that states: “Pedophiles are calling themselves ‘minor attracted persons’ and want inclusion in LGBTQ.” 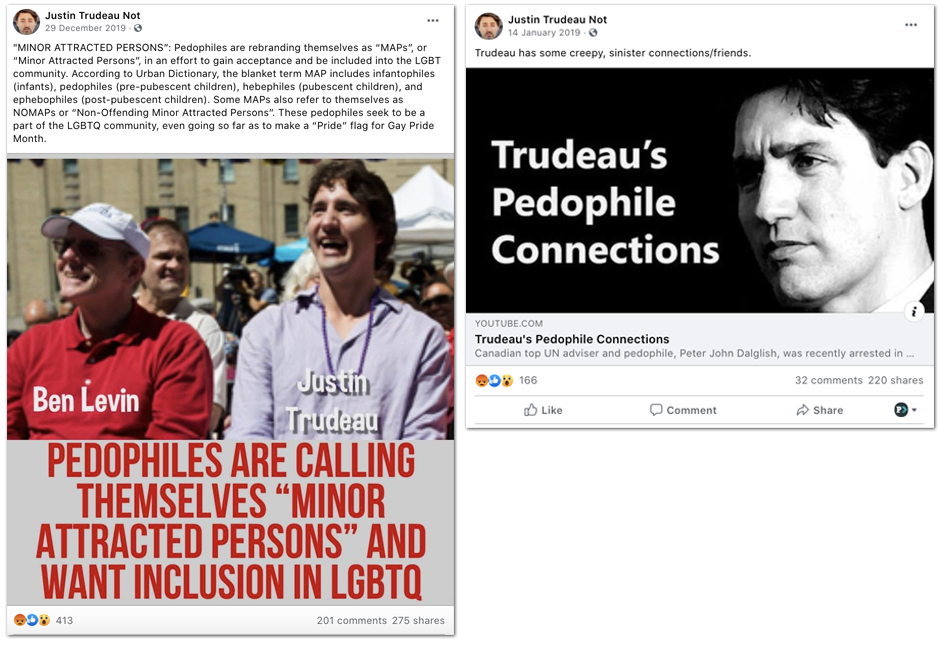 Asked if he actually believes Trudeau has “pedophile connections,” as his own page asserts as fact, Ligaya did not express confidence in his page’s claim.

He added that he was “sure it has been fact-checked by now” and speculated his page’s Trudeau pedophile memes were “probably at least deleted by Facebook,” although both posts remain visible on the “Justin Trudeau Not” page. 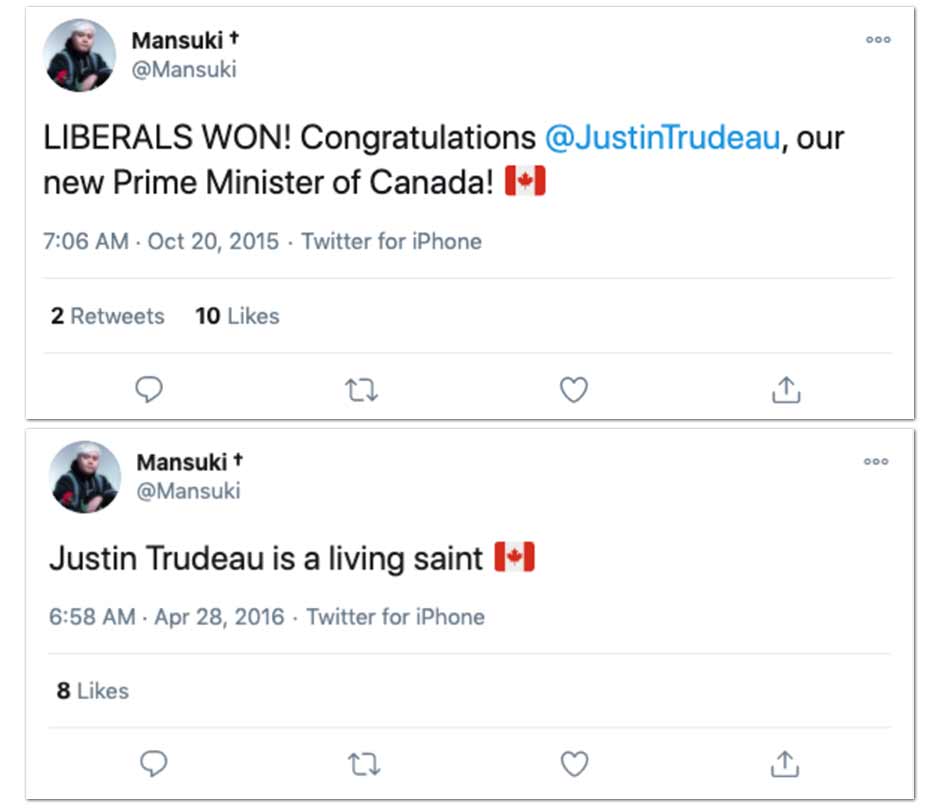 Ligaya deleted his tweet calling Trudeau a “living saint” shortly after it was brought to his attention by PressProgress, but explained: “People change, man.”

“I think there’s a lot of corruption,” he said. “Justin Trudeau, he means well, but I think it’s similar to the US presidency, like everybody wants change.”

“I’m a conservative, and there’s nothing wrong with that,” Ligaya added. “The Conservative Party is slowly building. There needs to be some sort of opposition.”

Ligaya said he and his “team” operate multiple right-wing Facebook pages, but would not disclose which other pages he is involved with nor would he identify his team members or confirm that they are based in Canada.

In addition to running far-right Facebook pages, Ligaya is a recording artist and the CEO of his own record label. His LinkedIn profile indicates he also works as “head of talent relations” for a company called Viral Nation.

Ligaya became a social media influencer after running a Vine account that amassed 1.5 million followers before the app shut down. That led to advertising deals with major corporate brands like Coca-Cola and McDonald’s.

“To this day, I continue working with them because it’s about the person,” he noted.

Only with the my McD’s App

Life’s about balancing sweet and sour, and so are McNuggets. Rep your ritual right now – get 10 Chicken McNuggets for the price of 6 only with the My McD’s app.

Asked what he hoped his network of far-right propaganda pages would ultimately achieve, Ligaya suggested politics was not his main motivation.

“Bro, I’m just living my life, day by day,” Ligaya told PressProgress. “I’m not here to try to take down anybody.”

“I just want to see how it grows, and see what kind of community we can build. I tap into different things and it’s all a business at the end of the day.”

Editor’s Note: Following publication of this story, Corus Entertainment, the company which owns Global TV and produces the television program Entertainment Tonight Canada, issued a statement clarifying it has no formal connection or sponsorship agreement with Ligaya, nor does it endorse his views.

“Entertainment Tonight Canada denies any connection, endorsement, or sponsorship of this individual beyond interviewing him,” Corus told PressProgress.