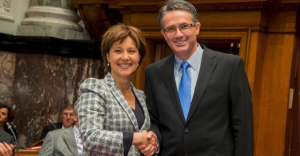 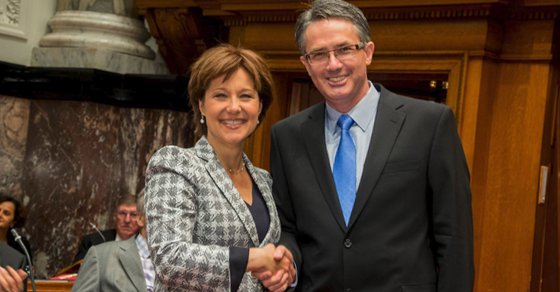 "I wonder if the now powerful LGBT movement is very tolerant of difference in this country?"

Up is the new down and down is the new up, according to BC Liberal MLA Laurie Throness.

During debate on Bill 27, legislation that passed into law Monday adding “gender identity or expression” to the human rights code, Throness told the British Columbia Legislature that he wouldn’t support the bill because recognizing gender identity as a human right is akin to discrimination against those whose views on gender are “rooted in Christian faith.”

The beliefs of the LGBT community, he added, now “dominates in our society.”

“My first question is for the LGBT community,” Throness asked the Legislature. “Now that the movement has arrived, now that its view dominates in our society, is it mature enough to tolerate difference?”

“After a generation of demanding and receiving tolerance, I wonder if the now powerful LGBT movement is very tolerant of difference in this country?”

“In my opinion, this special recognition reflects the strong and growing political influence of the LGBTQ community. Transgendered people are a vulnerable group, for sure. But in a paradoxical way, they are also very powerful … Certainly, the LGBT community is a legitimate interest, but it’s not the only one. I don’t care if it’s a Christian or some other religious group, an industry or a powerful business lobby or a rich person or an insistent organization. When some person or group becomes irresistible to the government, when the government can no longer say no to them, I get uncomfortable with that, because if government ever aligns itself with any partial or private interest rather than the public, someone else’s interest is going to suffer.”

How are the human rights of the LGBT community not a matter of the public interest?

Good question. Maybe he can tell all of us more about that sometime?

Seven provinces and one territory currently have legislation protecting against discrimination based on gender identity.

Throness told the legislature that “any programs designed to encourage greater acceptance of transgender people” are part of a “societal project” and questioned if it is “the healthiest message we can deliver to children, youth and impressionable people.”

He concluded his speech by affirming that all British Columbians, including members of the LGBT community and “those who are not quite sure yet” are “wonderfully made” and their “biology is beautiful,” bearing “the majestic and noble image of God most high.”

“May grace and peace be with you.”

Throness has previously accused the Law Society of British Columbia of attacking “the rights of Christians” for opposing Trinity Western University’s decision to force students and faculty to sign a pledge to live by Biblical ideals, including a ban on “sexual intimacy that violates the sacredness of marriage between a man and a woman.”

Throness is the Parliamentary Secretary to the Minister of Justice.