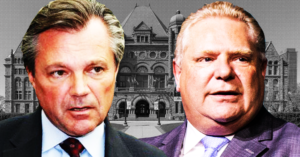 This article is more than 1 month old
Exclusive

A trusted adviser to Ontario Premier Doug Ford admits relaying a message to the Premier’s Office about attempts to arrange a meeting between representatives of the Government of Ontario and the Russian Federation.

One of those insiders is Frank Klees, a former Ontario PC cabinet minister under Mike Harris who served as a top adviser and campaign surrogate during Ford’s 2018 leadership bid. Ford has personally described Klees as a “legendary PC Party stalwart and a good friend.”

Thankful to have the support of Frank Klees, a legendary PC Party stalwart and a good friend. #pcpo #onpoli #pcpoldr https://t.co/AcQOk2YAL2

In an interview with PressProgress, Klees confirmed he received a request to set-up a meeting between Ford and Russian officials. Klees said he relayed that message directly to Dean French, Ford’s Chief-of-Staff at the time.

“I referred that letter to Mr. Dean (French),” Klees said, recalling an email he received from a backroom conservative operative named David Wallace advising him that he was “in a position to arrange an appointment for Doug Ford with Mr. Putin.”

Wallace, who has ties with top figures in Canadian conservative politics, describes himself as a former political fixer turned “whistleblower” – last week, PressProgress reported a senior official in the Premier’s Office admitted requesting a meeting with Wallace to obtain surveillance information about one of their own cabinet ministers.

In a statement to PressProgress, Doug Ford’s campaign spokesperson, Ivana Yelich, claimed Wallace has “ties to the Russian government” and supplied photos of Wallace at a meeting with Russian officials and Brampton Mayor Patrick Brown.

A trove of emails between Ontario PC insiders and Russian government officials newly obtained by PressProgress may shed further light into what was going on.

The emails show Klees was actually forwarded a backchannel message in September 2018 from Kirill Mikhaylov, the Russian Consul General of Toronto, seeking advice on how to set-up a phone call with “Premier Doug Ford.”

“I would like to advise you that I have recently submitted to the Ontario Protocol Service a formal request for a courtesy call to Premier Doug Ford,” Mikhaylov told Wallace. “As I understood you had a suggestion on how to facilitate setting up such a meeting.”

In the message, Mikhaylov explains he is interested in “augmenting Russian-Canadian relations, especially in the area of bilateral trade and business opportunities.” 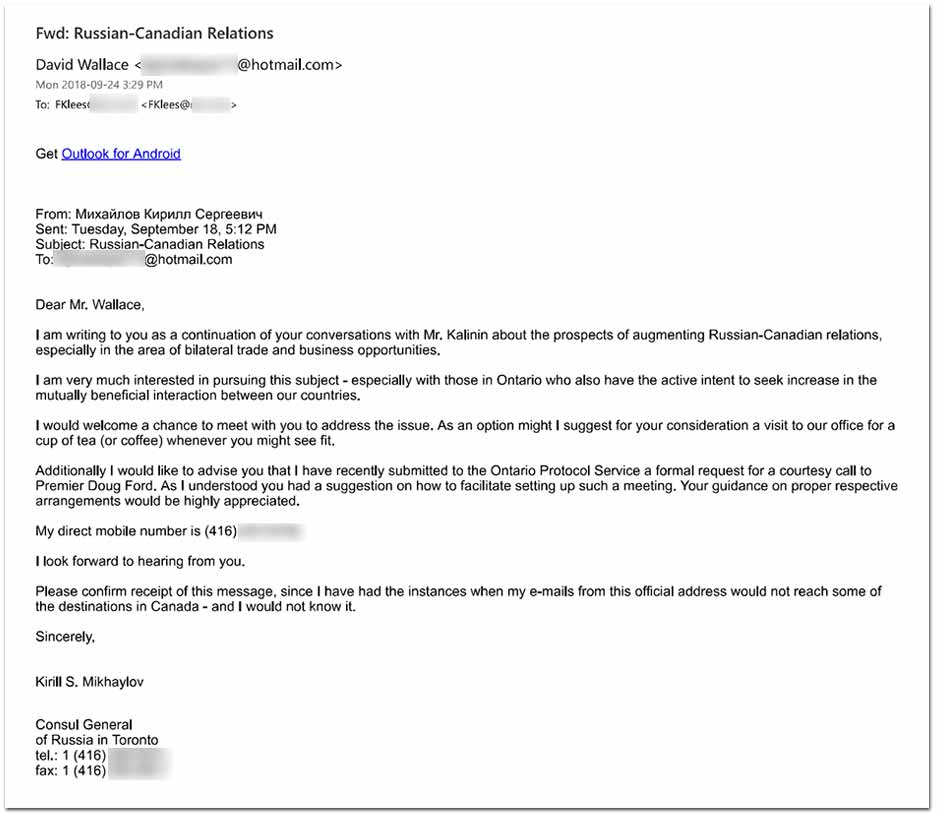 Ford’s spokesperson, Ivana Yelich, did not respond to questions from PressProgress about Klees’ admission that he sent messages about setting up meetings with the Russian government to the Premier’s Office.

Klees did not respond to follow-up questions from PressProgress about that email, including whether he considered the possibility the message could be a response to US sanctions or that he may be the target of a foreign intelligence operation.

The email received by Klees followed three months of backchannel communications between Wallace and Kirill Kalinin, an official at the Russian Embassy in Ottawa who had been expelled from Canada a few months earlier.

“I’m back in Moscow, I was expelled by the Canadian Government in April, they said I represented a threat to your country’s national security,” Kalinin wrote Wallace in July 2018. “It was done in solidarity with the UK on the so-called Skripal case.”

The email chain shows Kalinin looped in Russian Ambassador to Canada Alexander Darchiev who greenlit the plan and suggested they “engage” Consul General Mikhaylov in Toronto and an economic adviser named Sergey Strokov.

“I’d like to pass on your contact information to my dear friend Mr. William Moore,” Wallace replied. “William is working with Mr. Frank Klees, chief adviser to the Premier and the architect of his political career.”

“William is the gentleman who can advance this officially,” Wallace said, adding it would be a chance to “bring good opportunity to both Ontario and Moscow and establish friendships between Mr. Ford’s administration and industry and trade in Russia.” 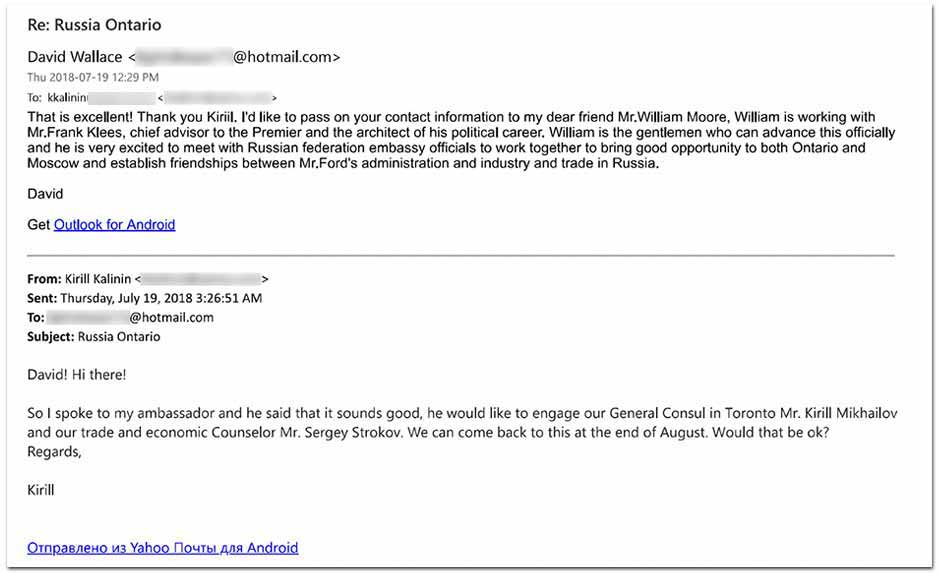 William Moore confirmed to PressProgress his involvement in a planned Russia “trade mission.”

Moore, who was recently appointed by Ford’s government to the Ontario Arts Council board of directors earlier this year, runs a consulting firm specializing in “strategic planning and communications strategy” doing work for “corporate, non-profit and government clients.”

Moore declined to disclose the names of his clients, but did confirm having previously worked for one of Klees’ clients, Geranium Corporation. Moore has also touted his role as an adviser on the $1.5 billion Friday Harbour Resort development project in Innisfil, Ontario, whose leadership includes Vaughan developer Jim DeGasparis and Geranium Corp.’s Boaz Feiner.

There is no evidence that any developers were  aware of any backchannel discussions with the Russian government. Moore also denies he has ever worked with Klees, says he has never met Klees in-person, but did admit he talks to Klees a “couple times a year.”

“Have only spoken to him a few times mostly to make introductions,” Moore told PressProgress.

Moore also confirmed the authenticity of a July 2018 letter signed under his name addressed to Dmitry Chernyshenko, a Deputy Prime Minister of Russia who served as the chairman of Gazprom Media, Russia’s largest corporate media entity.

Following Russia’s annexation of Ukrainian territory in 2014, Gazprom Media was placed under sanctions by the United States government and Chernyshenko’s assets were frozen by the United Kingdom – though neither were placed on Canada’s own sanctions list.

In his 2018 letter to the chairman of Gazprom Media, Moore highlighted his access to “corporate, political and government clients” and suggested he could help facilitate “opportunities” for Russian money in Ontario.

In the letter, Moore told Chernyshenko he’s worked with developers along the “Highway 400 corridor,” advised “the DeGasparis family for over a decade” and had an “active relationship with the Ontario government” thanks to his fundraising work for the Ontario PCs.

“I organized client donations of nearly $1M to support the Ontario Conservative Party,” Moore wrote. “When…Doug Ford became the new leader of the Conservatives, we offered strategic and tactical advice to Ford that reinforced his opportunity to win the election in June of this year.”

“From the guidance and support we have given to Premier Ford and his principal advisor Frank Klees we now have the potential to bring forward opportunities to this government should wish to utilize our resources.” 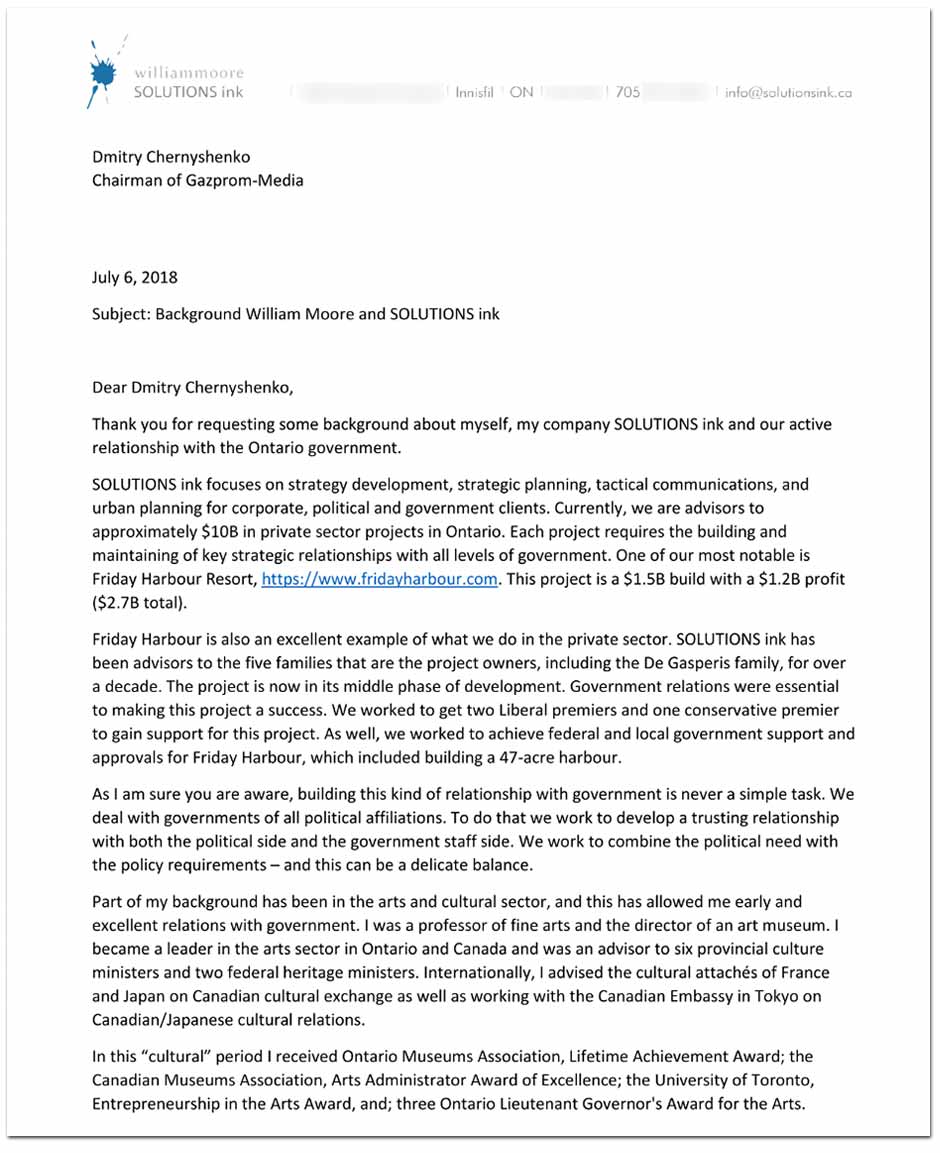 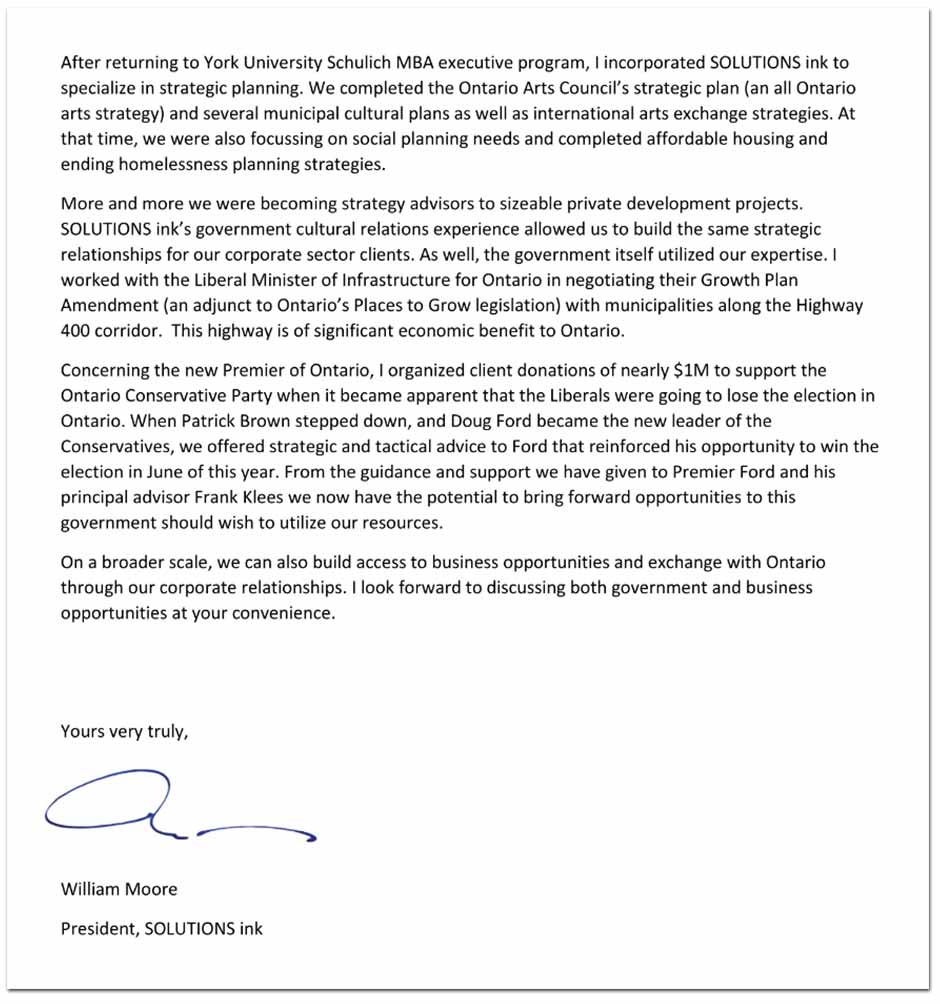 Klees did not respond to follow-up questions about the details Moore described in his letter to the chairman of Gazprom Media. Moore confirmed to PressProgress he has a copy of the letter in his own records and reiterated it is “not a forgery.”

“It was to advance a trade mission for which Wallace would be paid,” Moore said, alleging he believed Wallace was being paid by the “Russian Embassy.”

Wallace told PressProgress that Moore’s claim he was foreign-funded is “total bullshit.”

On September 25, the Russian Consul General sent an email inviting Moore and Wallace to a meeting at the Russian Consulate to promote “bilateral relations” between Russia and Ontario, as well as “exploring possibilities for supporting increased Russian-Canadian … business contracts.”

“I would be delighted to meet with you … to discuss bilateral relations” Moore replied a day later. Emails suggest a meeting did take place in October 2018.

Although the international sanctions on Russian entities and officials was evidently not a top of mind concern at the time, Moore says arranging meetings to facilitate the flow of Russian money into Ontario is not something he would do today.

“At the time, probably a good idea. But not now.”