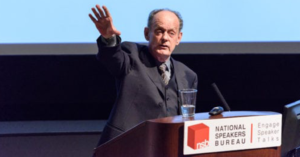 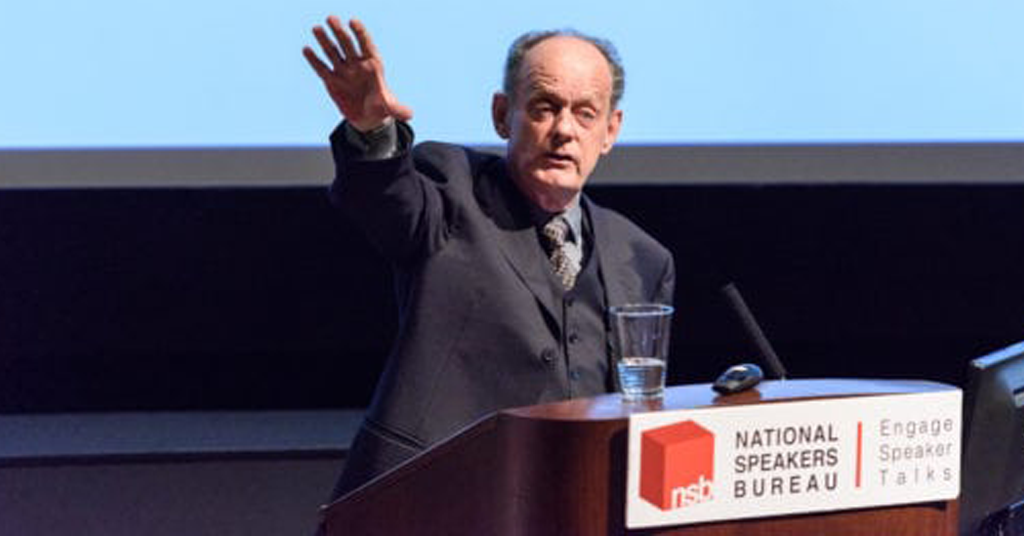 Despite facing numerous criminal charges, the leader of the occupation is receiving a ‘freedom award’ from a controversial right-wing charity

The leader of the convoy occupation of Ottawa will be celebrated at an award ceremony organized by a right-wing charity — and Rex Murphy is delivering the keynote address.

The Justice Centre for Constitutional Freedoms, a right-wing legal advocacy charity that often launches lawsuits in defence of social conservative causes and has been involved in lawsuits against COVID-19 public health restrictions, announced this week that it is giving its annual “freedom award” to convoy leader Tamara Lich.

Despite her lengthy rap sheet, the Justice Centre will be awarding Lich with their annual “George Jonas Freedom Award,” which “honours one individual each year who has contributed significantly to advancing and preserving freedom in Canada.”

The awards ceremony will be held in Toronto on June 16, even though Lich’s bail conditions explicitly prohibit her from stepping foot in Ontario.

The Justice Centre highlights that its event will begin with an “exclusive reception for VIP ticket holders” paying $500 each before the $200 per plate dinner, featuring a keynote address by former CBC personality Rex Murphy. 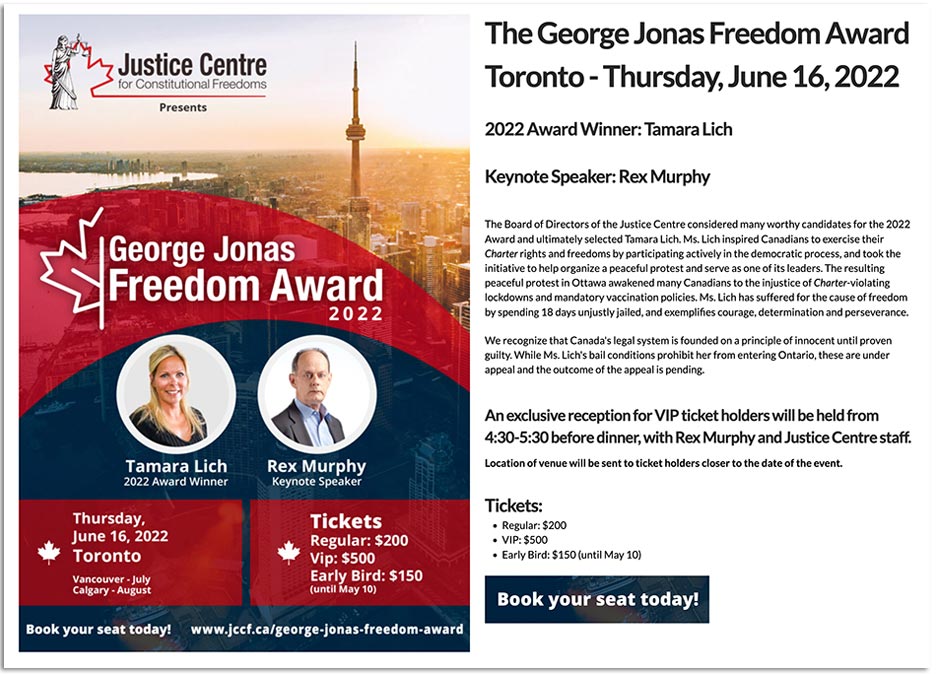 The “Freedom Award” ceremony has previously been sponsored by Postmedia.

The Justice Centre did not respond to a request for comment from PressProgress, however, the website promoting the event was later quietly updated.

“We recognize that Canada’s legal system is founded on a principle of innocent until proven guilty,” the Justice Centre’s updated website notes. “While Ms. Lich’s bail conditions prohibit her from entering Ontario, these are under appeal and the outcome of the appeal is pending.”

The Justice Centre added that “Lich has suffered for the cause of freedom by spending 18 days unjustly jailed, and exemplifies courage, determination and perseverance.” They added that the Ottawa convoy “awakened many Canadians to the injustice of Charter-violating lockdowns and mandatory vaccination policies.”

During the convoy occupation, Justice Centre lawyer Keith Wilson acted as the “lead counsel” for convoy organizers and acted as a spokesperson at press conferences. Wilson appeared to disregard masking rules at convoy events in local hotels, despite public health rules in Ottawa at the time.

John Carpay, the President of the Justice Centre, took a temporary leave last year after the Justice Centre admitted it hired a private investigator to place Manitoba’s Chief Justice under surveillance. The judge said he was followed to his private home and cottage in an attempt to dig up dirt showing him violating COVID-19 restrictions while he oversaw a case the Justice Centre was involved in.

Carpay was reinstated a month later.

Justice Glenn Joyal thinks it was part of an attempt to embarrass him while he is presiding over a court challenge related to the province’s lockdown measures. More tonight on The National. https://t.co/csgVQULmsx

Murphy, who is a familiar face on Canada’s paid speaking circuit, has previously voiced strong opinions on the topic of law and order in Canada.

After an angry mob rioted in Vancouver following the 2011 Stanley Cup finals, Murphy used his platform on CBC’s The National to lecture the “clodpoles, ne’er-do-wells, vandals, punks, thugs” and “clueless dolts” among the “pathetic pack of cowardly destructive losers” who were responsible for bringing anarchy to the streets of a major Canadian city.

“These vulgarians defecated on the reputation of one of Canada’s first cities,” Murphy said. “They hurt the stores and the employment of honest city caring people in Vancouver.”

Murphy could not be reached for comment about his views on the convoy and the impacts on Ottawa residents. Requests sent to Murphy’s email address were returned with automated messages indicating that his “inbox is full.”