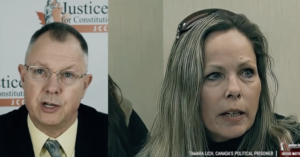 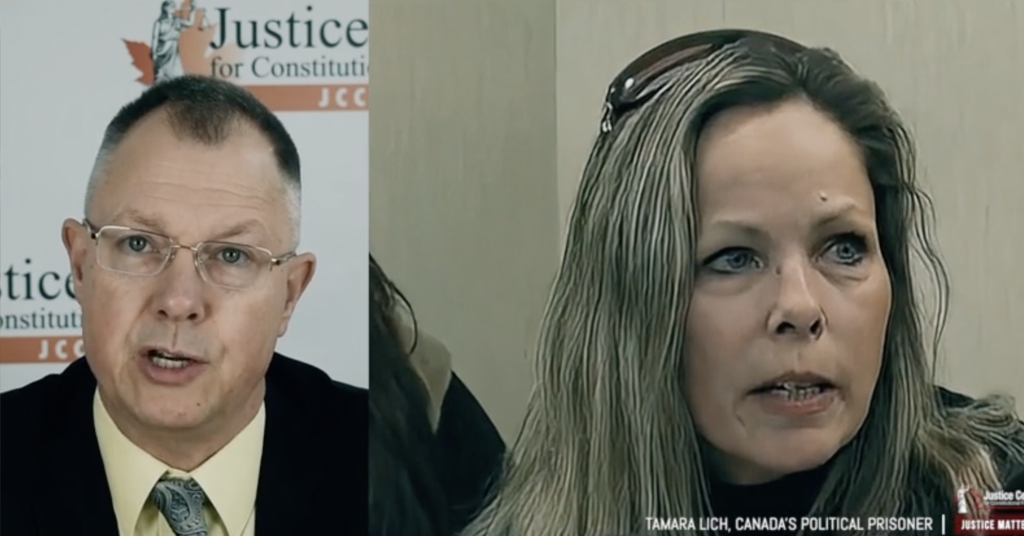 A controversial right-wing charity is bankrolling the criminal defence of one of the leaders of the Ottawa convoy occupation through publicly-subsidized charitable tax receipts.

The right-wing Justice Centre For Constitutional Freedoms, which has spent decades litigating cases on social conservative causes, is a registered charity that promotes “official tax receipts to donors for donations of $50 or more” on its website.

Early on during the convoy occupation, the JCCF issued a statement announcing it is “representing the Freedom Convoy 2022 in Ottawa and has a team of lawyers on the ground providing legal assistance and advice.” The JCC has since said it has “set-up a network of criminal defence counsel to advise and represent those charged with offences.”

In fact, on June 29, the JCCF announced it is “funding the legal defence of Ms. Tamara Lich, who has been recently re-arrested for an alleged breach of bail conditions.”

On this website, the JCCF explicitly tied funds for Lich’s bail hearing to charitable tax receipts.

“You may direct your donation to cases we are litigating on the drop down menu on our donations page,” the JCCF wrote. “Ms. Lich’s defense falls under the selection in the menu entitled: Trucker’s Legal Defense, which is meant for trucker participants in the Freedom Convoy and peaceful protests in Ottawa.”

The JCCF added: “If you would like to receive an official CRA tax receipt, please include your legal name, complete mailing address, and email address in the etransfer notes.” 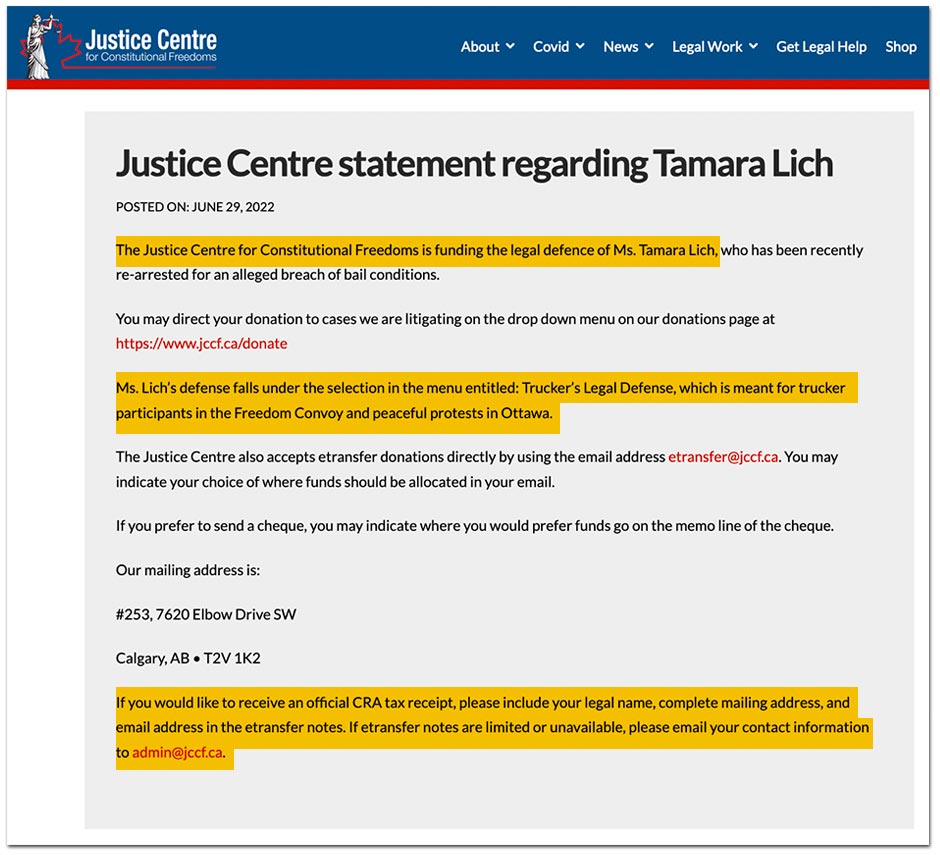 Lich has played a larger role in the JCCF’s recent fundraising efforts.

Last month, the JCCF presented Lich with its annual “Freedom Award” at the right-wing charity’s $200 per plate fundraising dinner which featured Rex Murphy as the glitzy gala’s keynote speaker.

Lich was arrested last month as a result of her participation in the JCCF’s awards gala, with Crown alleging Lich breached her bail conditions by meeting with other convoy organizers at the fundraising dinner.

As a registered charity, the JCCF is legally given the power to issue tax receipts that allow donors to deduct part of their contributions from their tax bill.

In its filings with Canada Revenue Agency, the JCCF provides this description of its ongoing programs:

Richard Warman, an Ottawa lawyer and Canadian Anti-Hate Network board member, said he struggles to understand how providing funding to a convoy organizer’s criminal defence could be considered a normal “charitable” activity.

“The Canadian Anti-Hate Network believes that raising funds to pay for the criminal defence of individuals involved in the illegal occupation of Ottawa is not charitable in any way,” Warman told PressProgress, adding it “should clearly not entitle a donor to a charitable tax receipt.”

Earlier this year, Warman filed a code of conduct complaint against JCCF lawyer Keith Wilson who acted as counsel for convoy organizers.

“CAHN is deeply concerned about activities of the JCCF leadership and staff,” Warman said.

The JCCF did not respond to a request for comment from PressProgress about its use of charitable tax receipts to fund Lich’s criminal defence.

According to the JCCF’s website, the Justice Centre’s “mandate is limited to constitutional matters” and it does not take on criminal cases:

Warman noted CRA has four “categories of charitable purposes”: Relief of poverty, advancement of education, advancement of religion and “other purposes beneficial to the community.”

“They don’t seem to relieve poverty, or advance education or religious purposes as the CRA defines these,” Warman said.

CRA’s list of activities that are “beneficial to the community” includes assisting the elderly, preventing or relieving sickness, public amenities, volunteer firefighting, counseling the distressed and running animal shelters.

University of Toronto Law professor Anver Emon said he believes the JCCF and other groups that supported the convoy are not receiving the same scrutiny as other charities. In particular, he noted in a 2021 report that several Muslim-led charities are frequently profiled for supposed extremist links.

Emon said it’s curious that “groups that support the Freedom Convoy will enjoy doing what they want without the same sort of suspicion that we observed applied to Muslim-led charities by CRA audits.”

Last year, an academic requested an audit by the CRA into why it is a registered charity, after the JCCF was linked to a plot to hire a private investigator to dig up dirt on Manitoba’s chief justice who was presiding over a case the JCCF was involved in, looking for evidence of the judge breaking public health rules.

“The JCCF has quite a controversial history, and while it doesn’t take government donations it benefits from charitable tax status at a cost to taxpayers,” Mount Royal University Professor Lori Williams told PressProgress.

Williams said that while governments could be accused of bias by denying charitable status to groups simply because they hold “controversial beliefs,” she added: “Polls show most Canadians disagree with Lich and co. and would likely object to their taxes being any higher in order to provide tax breaks to them.”

Update: This story was updated shortly after publication to include additional information about the Justice Centre’s policy on case selection.