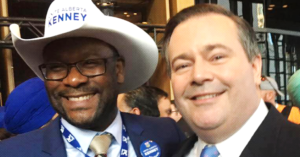 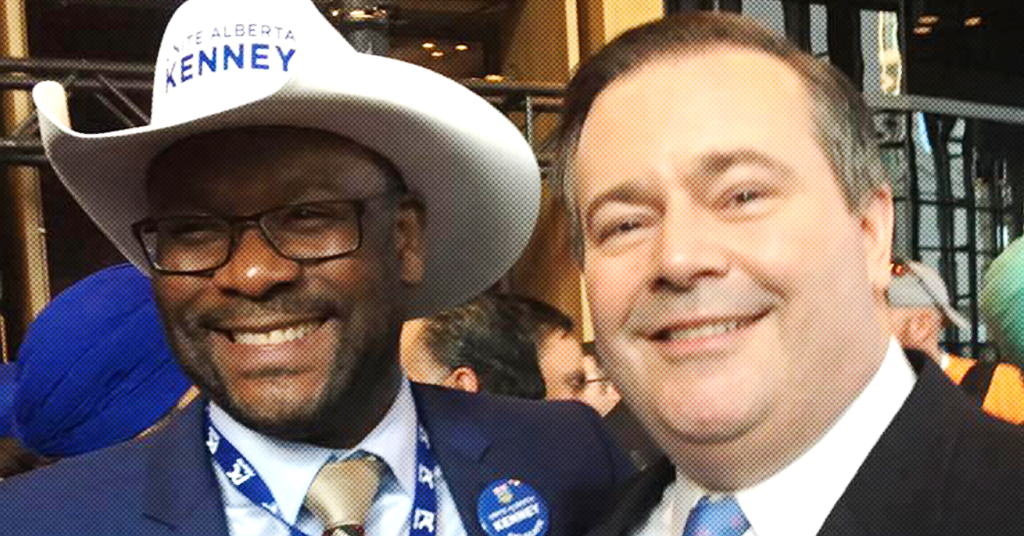 One of Jason Kenney’s United Conservative Party candidates is not apologizing for promoting lawn signs made and distributed by Rebel Media.

Kaycee Madu, UCP candidate for Edmonton-South West, faced calls to apologize and disavow Rebel Media Sunday after he published photos of himself standing next to  lawn signs emblazoned with Rebel Media’s logo while he was out door knocking over the weekend.

In a statement posted to his Facebook page, Madu described his encounter with the lawn sign as one of the biggest “highlights” of his day:

“One of the highlights of today’s door knocking was the ‘StopNotley.com’ lawn sign on the property of one of my constituents.” 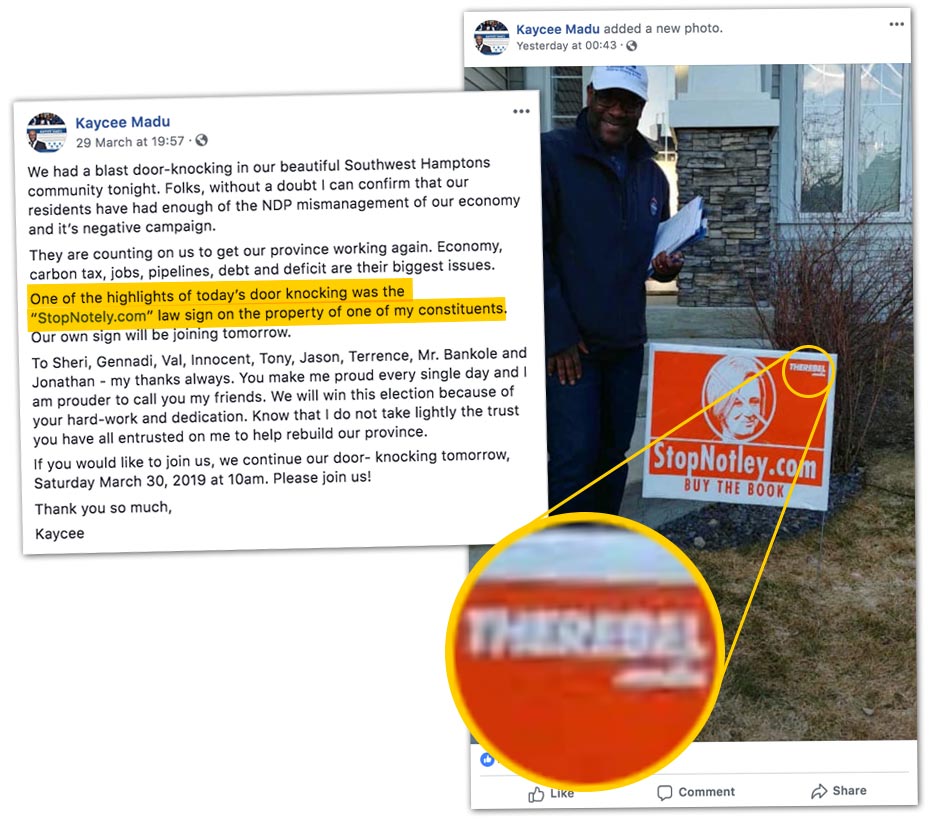 The URL featured on the lawn sign directs visitors to a website promoting an e-book published under the name of Rebel Media contributor Sheila Gunn Reid.

In materials promoting the e-book, the far-right publisher declares “(Rachel) Notley hates our culture” and attacks her for speaking out against “xenophobia.”

Rebel Media, which was financed with foreign money flowing from anti-Muslim think tanks and groups funded by top Trump donor Robert Mercer, has repeatedly made headlines for its hateful content.

“My opponent is praising the Rebel,” Archer tweeted.

“This is not who we are, Alberta. I call on my opponent (Kaycee Madu) to apologize.”

My opponent is praising the Rebel. This is not who we are, Alberta.
I call on my opponent @kayceemaduucp, to apologize. @alberta_ucp#ableg #abvote #abpoli pic.twitter.com/QSXxLoeEYi

Madu did not respond to questions from PressProgress seeking to clarify his views on Rebel Media, but the UCP candidate later issued a statement on Facebook that appeared to address the growing controversy:

“We have zero interest in divisive and identity politics and politics of personal attacks and destruction, which are the focus of the NDP.”

Madu’s support for Rebel Media puts him offside with some figures in his own party and raises questions about whether Kenney has lost control of his candidates.

In August 2017, UCP candidate Doug Schweitzer accused Rebel Media of “defending Nazis” and said unequivocally that Rebel Media has no place in Alberta.

“It is time for Albertans to say enough to this alt-right garbage,” Schweitzer tweeted. “Racism is racism. Not in our Alberta.”

It is time for Albertans to say enough to this alt right garbage. Racism is racism. Not in our Alberta. /2 #Charlotteville #ableg #ucp

Schweitzer did not respond to questions from PressProgress inquiring whether he still stands by this statement.

In 2017, Rebel Media spread conspiracies and attempted to fundraise off a white nationalist terror attack on a Quebec City mosque that left six Muslims dead. The website’s on-air personalities also triggered headlines around the world over anti-Semitic videos and rants about the Holocaust. Faith Goldy was later fired after appearing on a neo-Nazi podcast following a white nationalist terror attack in Charlottesville, Virginia.

In Alberta, where Premier Rachel Notley has faced more threats than any other premier in Canada, Rebel Media organized several anti-government protests, and made headlines after a crowd, stirred up by speakers denouncing Notley, began chanting “lock her up.”

Keean Bexte, Rebel Media’s current Alberta correspondent, was identified as one of the operators behind an online store that sells white supremacist memorabilia following an investigation by Ricochet last year.

Adam Strashok, one of Bexte’s close friends, made headlines after it was revealed he helped run the white supremacist store and was linked to anti-Semitic comments on a neo-Nazi chat server — Strashok also managed Jason Kenney’s call centre.