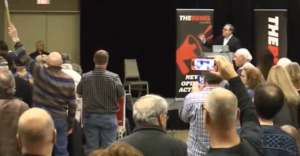 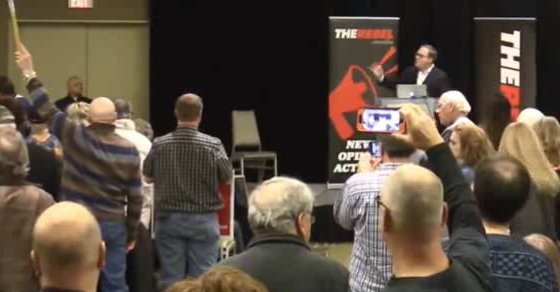 Video shows Levant denouncing the group of elderly women, some in their eighties, and calling on hotel security to have them physically removed.

Looks like Ezra Levant’s staged rallies aren’t as glorious and free as he’d lead you to believe.

One week ago, the alt-right Rebel Media website owner threw a Twitter temper tantrum claiming “freedom of speech” was at stake after his followers were criticized for directing chants of “lock her up” at Alberta Premier Rachel Notley.

But this week, after declaring he’ll let “Albertans say whatever they want” at his next rally, Levant ordered hotel security to eject a small group of elderly women who sang the national anthem and performed humourous Christmas carols.

Many highlights from the rally. I won’t lie: my favorite was hearing a room of 1,000 Albertans booing the NDP Raging Grannies out the door!

Seriously @ezralevant? You kicked out the Raging Grannies? Unbelievable. https://t.co/Faid9K56nw

Ezra is a freedom of speech warrior until he removes Raging Grannies to silence any dissenting views. https://t.co/voRtAGelrc

Video streamed live by Rebel Media shows Levant denouncing the group of elderly women, some in their eighties, to his jeering followers and calling on hotel security to have them physically removed from the property:

Ironic too, considering Levant and Rebel Media are known to crash other people’s events.

But the Raging Grannies, who describe themselves as a “non-partisan activist group who use humour and song to comment on current events,” say they aren’t “NDP extremists” – but they’re “definitely pro-Canada”:

“We started singing ‘O Canada’ and were still singing it as we were ushered out by hotel staff and security guards. We’re definitely pro-Canada.”

Susan Stratton of the Calgary Raging Grannies flatly denies Levant’s unsubstantiated accusation that the group of elderly protesters are a “New Democrat brigade” or were in some way dispatched by the Premier of Alberta to disrupt the event.

“Ezra Levant apparently grabbed the opportunity to twist our presence” to fit his agenda, Stratton told PressProgress, adding that the Raging Grannies generally “support the things we like that the government is doing and oppose those we don’t like.”

Stratton added that her group believes “climate change is a crucially serious matter that demands action” and were simply exercising their constitutional right to sing “pro-carbon tax songs” set “to the tune of a Christmas carol”:

“We have written several pro-carbon tax songs, believing the many prominent economists – and petroleum producers – who say that the carbon tax is the most efficient and effective way to reduce the greenhouse gas emissions.”

During a 2014 defamation lawsuit, Levant’s lawyer argued his client’s words should not be taken literally due to his tendency to be “provocative” and “make outlandish comments.” An Ontario Superior Court judge disagreed and ordered Levant pay $80,000 in damages.

Here are a few other highlights from the event:

Sask. MP Brad Trost denies climate change and gets standing ovation. Sigh. Embarrassed to be in the same province. https://t.co/pJcWVChUJB

@calxandr comparing his being voted out as MP to O&G workers losing jobs due to economy. ARE YOU KIDDING ME!? #ableg

We sent a reporter to cover the rally and report on what was said. Which she did: https://t.co/zG13E6Az4x . And she got this: pic.twitter.com/hYqhmx42pP

Jailing protestors, hacking the government, advocating violence against media … this rally has it all. #ableg #cdnpoli https://t.co/S5JuDMkWAC