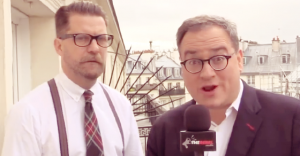 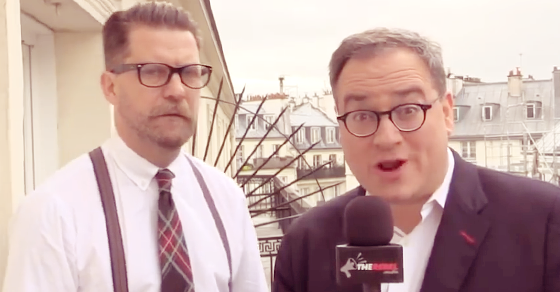 Rebel Media's Gavin McInnes shot a frantic video walking back his comments on "Jews" and "the Holocaust" at the airport.

For most people, a visit to the Holocaust museum would be a humbling experience.

That, along with expressions of apparent skepticism towards the Holocaust, earned the star of Ezra Levant’s Rebel Media website praise from the so-called alt-right – including shout outs from white nationalist leader Richard Spencer and former Ku Klux Klan Grand Wizard David Duke:

How did someone from a website that has frequently showcased Canada’s Conservative leadership candidates become toast of the town in anti-Semitic circles?

The story begins with Rebel Media’s recent trip to Israel – officially described as a “fact-finding mission” by Rebel Media, but McInnes likens it to a “brainwashing trip” that “the Israeli government paid for” along with “mostly Israeli” Rebel Media donors.

Instead, McInnes shot videos showing “a Nazi take on Israel” and discussing the need to increase birth rates in the West with fellow Rebel Media hosts Faith Goldy and Sheila Gunn Reid: But in a pay-walled video shot for Compound Media’s The Gavin McInnes Show and later published on YouTube by alt-right blogs, McInnes is seen going on an extended rant explaining why his trip to the Holocaust museum has inspired “anti-Semitic” feelings.

Using air quotes to describe the “Holocaust,” McInnes says he felt an urge to confront a guide at the Holocaust Museum and challenge the historical accuracy of the museum’s facts, questioning the number left dead by the Holocaust and the existence of gas chambers at Nazi concentration camps – “I felt like I felt myself defending the super far-right Nazis,” McInnes says.

The Rebel Media host would also go on to attribute the Ukrainian genocide – the Holdomor, a forced famine carried out by Stalin – on “Jews” and also blame “Jewish intellectuals” for the rise of Hitler:

But while he was celebrated by white nationalists, McInnes and Rebel Media co-owner Ezra Levant were condemned by just about everyone else:

And not the best moment for Rebel Media either.

Last week, Rebel Media parted ways with controversial host Lauren Southern. Neither side would disclose the reason for her departure, but it coincided with Southern’s videos displaying an increasingly sympathetic tone towards fascism:

Presumably, the Israel junket is at least in part about rejecting the suggestion that they’re Nazis.

But by Sunday night, not long after touching down in North America, Rebel Media published a hastily produced video of McInnes shot at the airport walking back his comments on the Holocaust, denying his earlier claim that Rebel Media received funding for the trip from the Israeli government and disavowing the support of “my new Nazi friends”:

McInnes claims the video was taken “out-of-context” and attempted to clarify that the Holodomor and the Treaty of Versailles were not “done by Jews”:

“In the clip, I was talking about the Holocaust museum and I was saying a lot of different things, one of them I was saying is I don’t like dwelling on genocide … but then I was also saying: if you are going to dwell, can you just talk about what the Nazis say and refute their points? Their points are: the Treaty of Versailles was done by Jews. It wasn’t. Holodomor was made by Jews. It wasn’t.”

Though that seems at odds with what McInnes said in his original video:

“Holodomor was Ukrainians, I think it was 10 million Ukrainians that were killed. That was by Jews. That was by Marxist, Stalinist, left-wing, Commie, socialist, Jews. You see what this fucking place is doing to me? Even with the Nazis, I was like: well, wasn’t the Treaty of Versailles, wasn’t that disproportionately influenced by Jewish intellectuals?”

And many commenters seem to have a hard time following this explanation:

As @ezralevant seeks to do damage control, keep in mind his embrace of neo-Nazi lingo, memes, etc. #cdnpoli pic.twitter.com/EovE1UgUs4

One thing’s for sure: if you actually need to clarify what you really think about the Holocaust or distancing yourself from Nazis, it’s probably a good sign that it’s time to sit down and take a hard look at what you’re doing with your life.

UPDATE 1: After attempting to walk back McInnes’ Holocaust comments, Rebel Media pulled another u-turn on Tuesday, this time publishing a new video with the headline “10 things I hate about Jews.” The video begins with a bleary-eyed McInnes wandering down a Tel Aviv street smoking a cigarette.

Beginning with rants about the traffic and how “the food sucks” in Israel, by the end of the video, the Rebel Media host has made the following points:

• McInnes claims Jews have a problem with “alpha males, especially when they’re white.”

• McInnes claims Jews are “scared of Christians and Trump” because they have a “whiny, paranoid fear of Nazis.”

• McInnes claims Jews do not have a “good attitude” and need to get over the Holocaust.

• McInnes compares Jewish attitudes towards the Holocaust to African-American attitudes towards slavery (“It’s like a black guy going: yeah, white people did slavery. Well, they didn’t start it but they ended it so maybe be a little more positive about it”).

1/2 We love humour about Israel. But Gavin McInnes’ “10 things I hate about Jews” on Rebel Media just isn’t funny…

2/2 …It’s offensive and stupid. If Rebel thinks this helps Israel’s cause, think again.