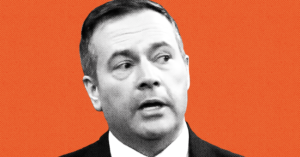 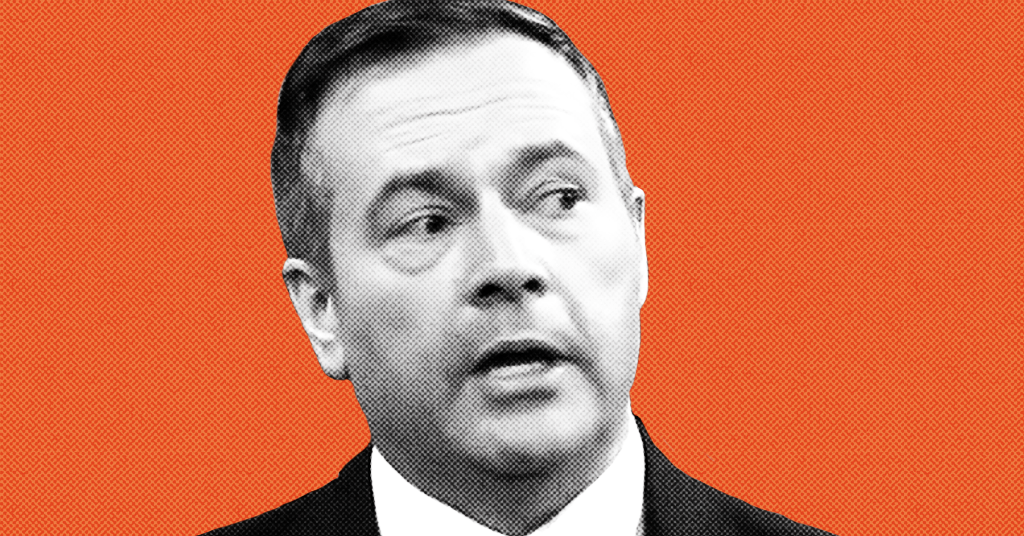 Multiple individuals who participated in the the United Conservative Party’s 2017 leadership vote say they’ve recently been questioned by RCMP investigators.

Two individuals whose names appear on a list attached to phony e-mail addresses, as well as a third individual, one of Jason Kenney’s campaign workers, who says he supplied membership applications to high-ranking members of Kenney’s leadership team, all confirmed to PressProgress they’ve been questioned by RCMP investigators in recent weeks.

Those who have been questioned by the Mounties indicated at least three separate RCMP officers have been directly involved to the case.

An RCMP spokesperson confirmed they’ve been “looking into” allegations about the UCP leadership vote since at least mid-March, but told PressProgress “no further information will be provided on this matter unless there are criminal charges laid.”

Two weeks ago, CBC News reported that a list of UCP members included names attached to “dozens” of “fake” e-mail addresses registered at domains that created between September 20 and October 13, 2017, only weeks before the leadership vote.

A list obtained by PressProgress includes the names of individuals who insist they voted in the 2017 UCP leadership race, but appear attached to fake e-mail addresses registered at domains created in late September and early October 2017 through a domain service provider based in Provo, Utah.

Many e-mails sent to addresses included on the list now bounce back to sender as most of the domains — such as “tikonamail.com” or “gianimail.com” — are no longer active and appear to have expired one year after they were first registered. 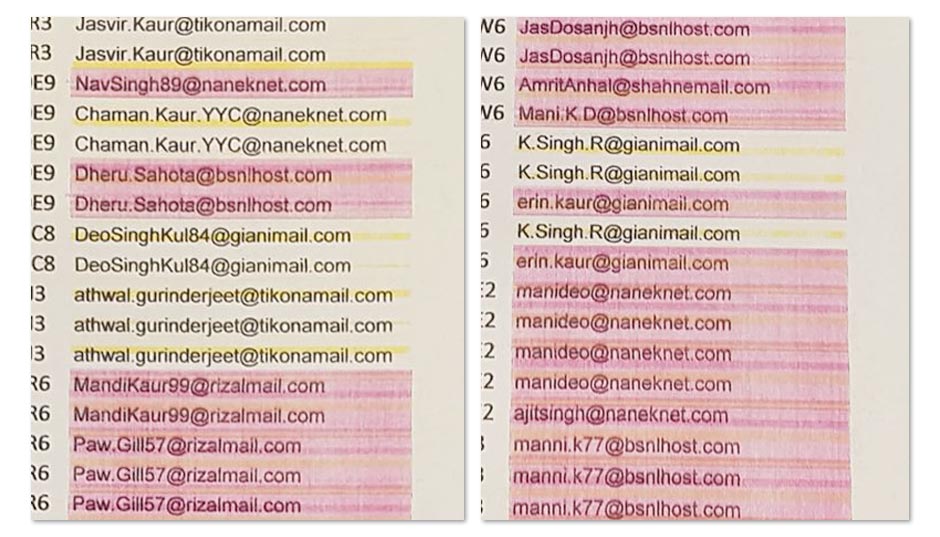 Although the e-mail addresses included on the list are fake, PressProgress confirmed many of the names and physical addresses attached to them are quite real.

Individuals at two separate residences confirmed to PressProgress they had recently been visited by RCMP investigators who asked questions on matters relating to suspicious e-mail addresses and the 2017 UCP leadership vote.

Three members of UCP supporter Kanwaljit Shergill’s suburban Calgary household appear on the list connected to an e-mail address registered at “ptclmail.com,” a domain that was registered five weeks before the vote.

Shergill told PressProgress she provided a statement after RCMP investigators from a “special unit” visited her home and asked her family about e-mail addresses they’d never seen before.

The RCMP investigators were “showing us some e-mails,” Shergill explained. “They were not related to me.”

Shergill said the RCMP investigators asked her family if they “provided our e-mails” to the UCP — “we never did,” she noted.

“They were asking if we voted online or not, but we never did, we said no.”

“They were saying it was used for online voting or something,” she recalled, insisting repeatedly her family cast votes in-person for the UCP leadership vote. “We voted at the place, but never online.”

Rashpal Sahota, who appears on the list with four other family members registered under a “naneknet.com” e-mail address (registered in September 2017), confirmed he spoke to the RCMP too, but declined to comment further.

“I have spoken to RCMP,” Sahota told PressProgress. “It’s confidential.” 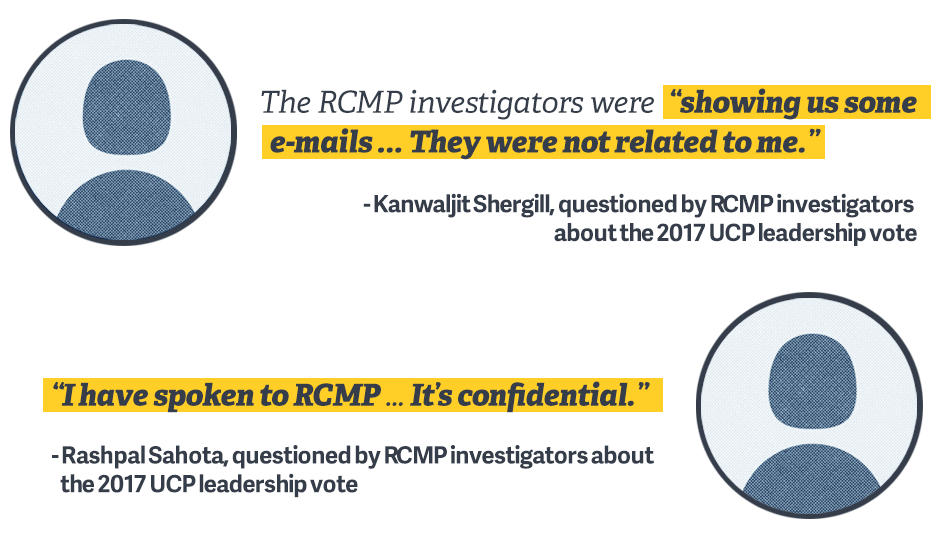 Several others who live at addresses included on the list told PressProgress they cast votes in the October 2017 UCP leadership. Most indicated they cast ballots in-person at a location in Northeast Calgary.

Harjeet Singh, who appears on the list along with two other household members connected to a “link3mail.com” e-mail address, said he voted in-person in Falconridge.

Ramandeep Singh Johal also told PressProgress he’s never heard of “bsnlhost.com” even though he and two family members are listed under that e-mail address.

“I was just 18 at that time,” Tiwana told PressProgress. “I went there, I cast my vote.”

Except there’s just one small wrinkle: the UCP leadership rules indicated that the party itself would have “no UCP-organized in-person voting locations.”

UCP rules and procedures for the 2017 leadership

While the rules encouraged leadership teams to “help all Electors to vote,” it appears Kenney may be the only one who set-up his own in-person voting locations.

Responding to a report in February that his team used VPNs to cast multiple votes from the same computers at “Kenney voting kiosks,” Kenney suggested that this was done by “all campaigns” as a “convenience” to seniors.

Kenney’s main rival, Brian Jean, fired back that his campaign “never used VPNs or voter kiosks” during the leadership vote.

A third individual, a campaign worker for the Jason Kenney leadership campaign who describes himself as an “old-time worker for the UCP,” told PressProgress he was questioned for “20 minutes” by two RCMP investigators at a Tim Hortons in northeast Calgary on March 25.

“They were asking about the UCP” and “the 2017 party election,” the Team Kenney worker told PressProgress, adding “they were trying to ask me if there were some wrongdoings and things like that.”

“I was surprised they called me,” he said. “I’m just a normal worker.”

The Kenney leadership campaign worker said the RCMP asked him who he gave his UCP membership forms to and whether he had “given any e-mails to anyone?”

“My job was just to sell memberships, collect data, that was it,” the campaign worker explained, noting that “the only thing is sometimes I’d collect the information without e-mails” because sometimes people in the South Asian community “don’t use e-mails” or “the one guy” who is “responsible” for the family will give his e-mail address on behalf of the entire family.

“These were the three big bosses, I don’t know what they were doing, normally I just dropped-off forms in their hands — they were the ones doing the data thing, our thing was we just made people members.”

Issik, who is the current UCP candidate in Calgary-Glenmore, was alleged to be the operator of a Kenney kiosk in a letter sent to the RCMP a few months ago by former UCP MLA Prab Gill.

Majumdar, an executive at former Prime Minister Stephen Harper’s consulting firm, was a high-ranking member of Kenney’s leadership team and was recently named in leaked e-mails as an apparent central figure in the “kamikaze” scandal.

Smetacek previously admitted she received instructions on how to use VPNs to bypass the UCP’s internal systems to prevent people from voting multiple times from a single computer, although she insisted the use of VPN software did not violate any rules in the UCP leadership race.

“I have no comment,” Smetacek told PressProgress when asked about the RCMP investigation. “You can ask me your questions, but I will not answer them.”

Neither Issik nor Majumdar responded to multiple requests for comment from PressProgress.

An RCMP spokesperson told PressPogress the Mounties received a correspondence from the UCP’s legal counsel, Steven Dollansky, on March 18, 2019.

In a statement to Maclean’s last month, UCP executive director Janice Harrington called the allegations “outright lies” and said the party proactively offered to assist with the RCMP’s investigation:

“The RCMP have acknowledged receipt of our letter and have taken us up on our offer of assistance … The party is in the process of compiling and sharing information with the RCMP that demonstrates the integrity of the UCP leadership race.”

Harrington did not respond to multiple requests for comment from PressProgress.

Kenney has previously rejected suggestions the integrity of the UCP leadership vote was compromised, crediting an “independent firm of chartered accountants” with overseeing the “most careful, secure leadership vote” in “Canadian history.”

One “senior associate” at the small firm was David Dorward, one of Kenney’s top leadership organizers and the current UCP candidate in Edmonton-Gold Bar.