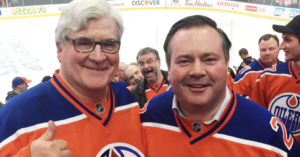 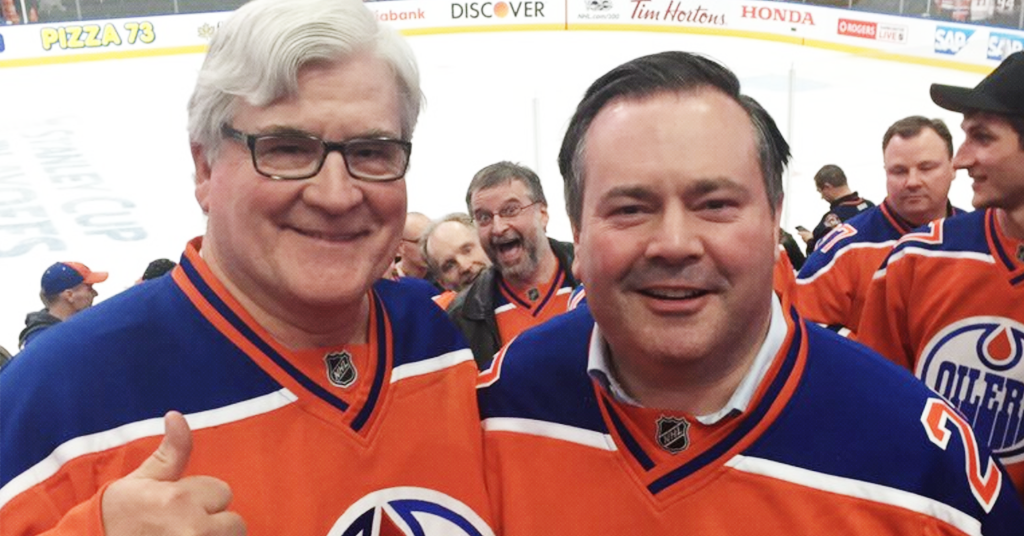 The auditor tasked with safeguarding the integrity of the United Conservative Party leadership vote has family and financial relationships with Jason Kenney’s party, something experts say professional accountants are supposed to avoid.

Dogged by allegations his leadership team engaged in “identity fraud” as part of a mass vote rigging scheme, Kenney has shrugged off questions about the integrity of the vote by insisting the vote was “closely monitored” by an “independent firm of chartered accountants.”

Kenney even credited the “professional accountants” for running the “most careful, secure leadership vote certainly in Alberta, if not Canadian history.”

What Kenney doesn’t mention is the Edmonton-based accounting firm that oversaw the vote has numerous family and financial connections with his party – something that appears to some as a conflict of interest.

Dorward & Company, which calls itself a “boutique firm of Chartered Accountants,” oversaw the 2017 UCP leadership vote. Its website lists only four employees.

The firm was founded by David Dorward, an event organizer for Kenney’s leadership campaign and the current UCP candidate for the riding of Edmonton-Gold Bar but records show the firm is now owned by his son, Spencer Dorward. 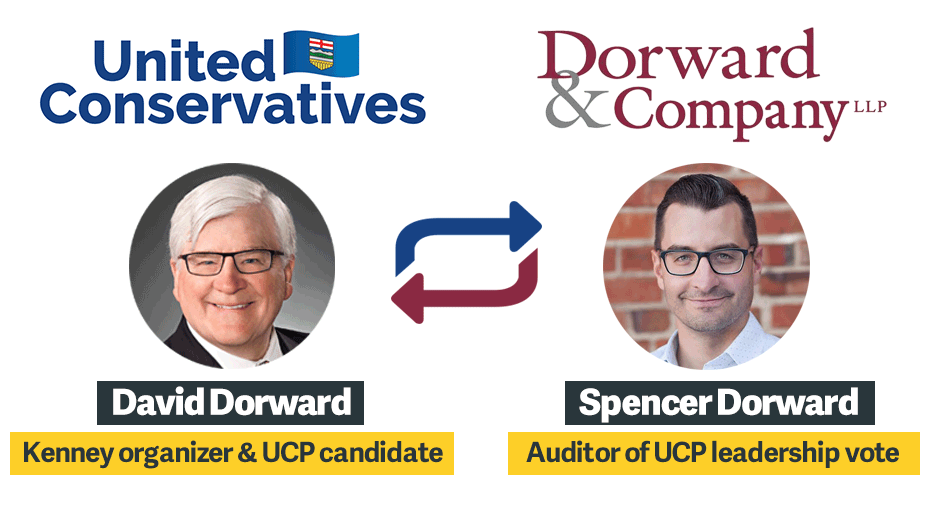 According to Dorward’s public statements, the UCP candidate sold his partnership interest in the firm to his son in 2015, but his LinkedIn profile suggests Dorward has retained the title of “senior associate,” providing “tax” and “accounting” work at the firm for the last four years.

In November 2017, only one month after the UCP leadership vote, Dorward spoke at a conference in Vancouver identified as a representative of Dorward & Co.

As recently as last month, Dorward has continued to make public statements linking himself to the audit firm trusted to oversee the UCP leadership vote.

In a UCP YouTube video published on February 7, 2019, Dorward told Kenney that he continues to keep a “desk” at Dorward & Co.’s office.

Dorward’s ties with the auditing firm responsible for overseeing the UCP leadership vote are noteworthy in light of his outspoken involvement with Kenney’s leadership campaign.

Dorward, a former Alberta PC MLA, attended events in support of the PC-Wildrose merger in early 2017 and was later actively involved on the ground campaigning for Kenney’s leadership.

In late October, days before the vote, Dorward co-hosted a major pro-Kenney rally in Edmonton where the Dorward & Co. “senior associate” fired up a crowd in support of one of the UCP leadership candidates, despite Dorward & Co.’s formal role as the party’s external auditor.

“Honoured to co-host the Edmonton rally for Jason Kenney last night,” Dorward said. “He is definitely the UCP leader to vote for over the next three days!” 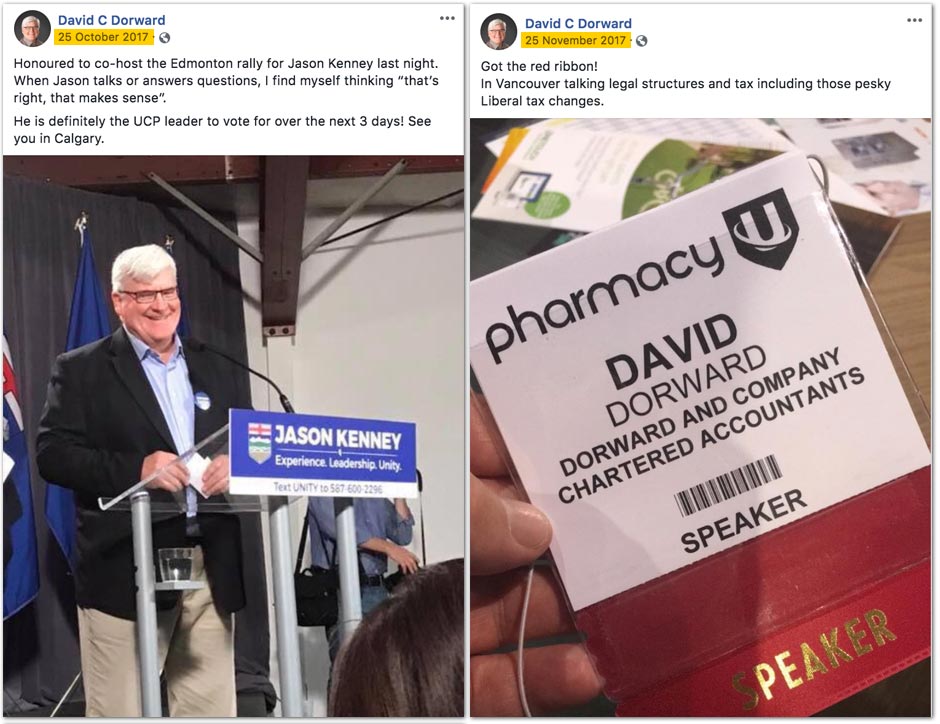 Doward, who did not respond to multiple requests from PressProgress to comment on this story, has defended his family firm’s involvement as auditors as recently as last month.

On his Twitter account, which was recently deactivated without any explanation, Dorward played down his involvement in the firm when some questioned the connections between his firm and “Jason Kenney’s team.”

“I turned the firm over to new partners seven years ago,” Dorward responded. “I understand the Calgary office was engaged to audit the count process. I was not involved.” 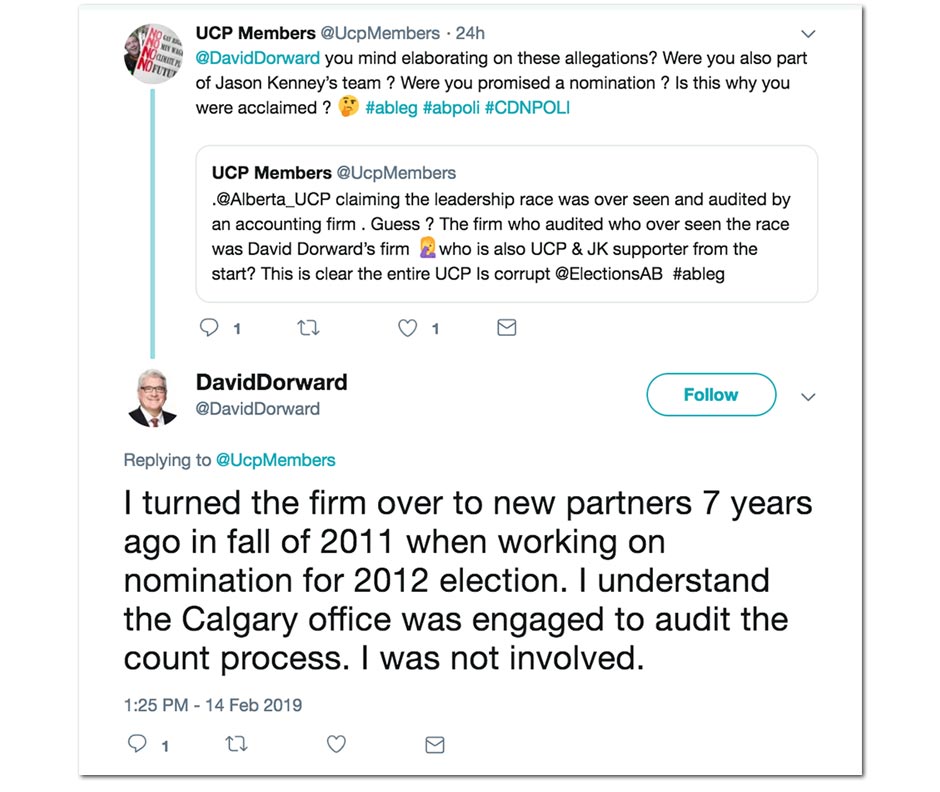 But Dorward’s assurance he was not personally involved in the audit may do little to address concerns about the optics of a conflict of interest.

Thomas Lukaszuk, a former Deputy Premier of Alberta and Alberta PC leadership candidate, says picking a small firm with close personal ties to Kenney seems an odd choice to assure “the integrity of the race.”

“Historically, this function was carried out by large, national accounting firms,” Lukaszuk told PressProgress. “Not mom and pop operations.”

“Considering how flawed the race was and how none of the voting and ‘kamikaze’ inconsistencies were ever brought to light by the ‘auditor’, one must wonder how objective was the process,” he added.

“In my opinion, there is clear apprehension of bias.”

In fact, the UCP candidate’s son Spencer Dorward – the owner of Dorward & Co. – has donated nearly $1,500 to Kenney’s party since 2017, including a $925 donation to his father’s constituency association around the same time as his company audited the party’s leadership vote.

During the same quarter as the UCP leadership vote, the UCP’s auditor and his spouse gave a combined $1,850 to the UCP constituency association in David Dorward’s Edmonton-Gold Bar riding.

Spencer Dorward did not respond to several phone calls and e-mails from  PressProgress requesting clarification on basic information about who owns the company or the nature of Dorward’s father’s role at Dorward & Co.

According to Gordon Turtle, Senior Vice President of communications and government relations at CPA Alberta, “objectivity and neutrality” are two of “the most important principles” guiding the professional conduct of auditors.

“If an audit or any product of a CPA’s work is potentially compromised as a result of conflict factors, then that would be of grave concern to the profession.”

CPA Alberta is the professional regulatory body overseeing chartered accountants in the Province of Alberta, protecting the public interest by “setting and enforcing high professional and ethical standards.”

Despite Kenney’s suggestion that his auditors conducted the “most careful” audit in “Canadian history,” Turtle notes any audit in which a client has “financial interests with the auditor” or has connections with “family members or former colleagues” would not only compromise the integrity of an audit, but could break the rules too.

He cautioned that a family connection may not be problematic if an auditor did work for a client who employed a “distant cousin who works in the mail room,” pointing out that it ultimately a “question of materiality.”

Nonetheless, Turtle says “the bottom line” is every CPA should always question if their work may lend itself to the appearance of a “potential conflict of interest,” noting appearances alone are enough to undermine the “credibility” of an audit: