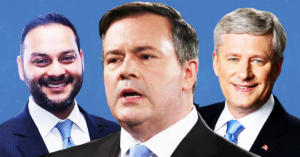 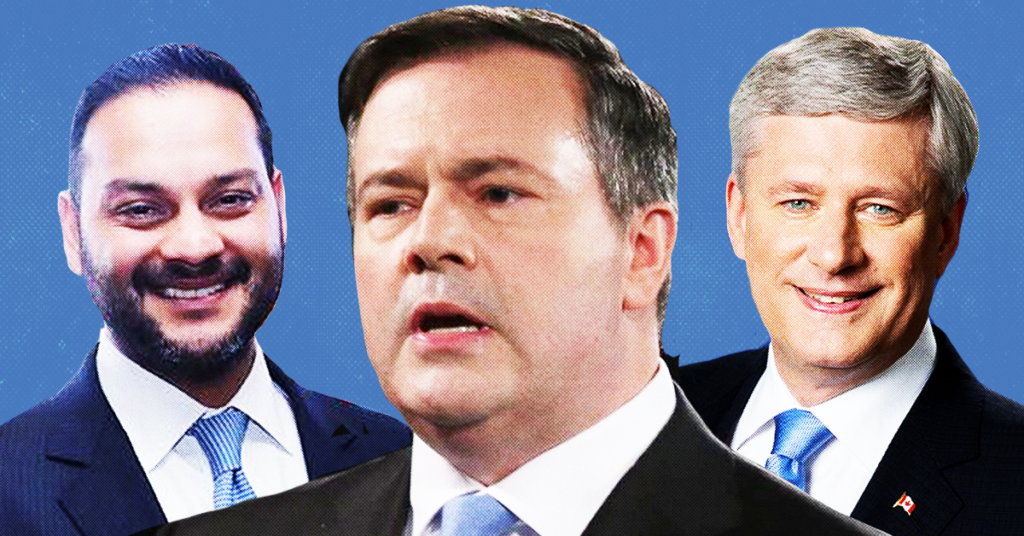 An executive at the consulting firm of former Prime Minister Stephen Harper was “looped in” on confidential campaign plans shared by e-mail between Jason Kenney’s UCP leadership team and “kamikaze” candidate Jeff Callaway.

According to internal e-mails newly obtained by PressProgress, Harper & Associates global director Shuvaloy Majumdar was also CC’d on these confidential e-mails alongside senior members of Callaway and Kenney’s campaigns.

Callaway’s co-campaign manager Cameron Davies, who verified the authenticity of the e-mails, told PressProgress that Callaway and top Kenney staffer Matt Wolf both directed him to make sure Majumdar was “looped in” on Callaway’s campaign plans so he could provide “additional feedback.” 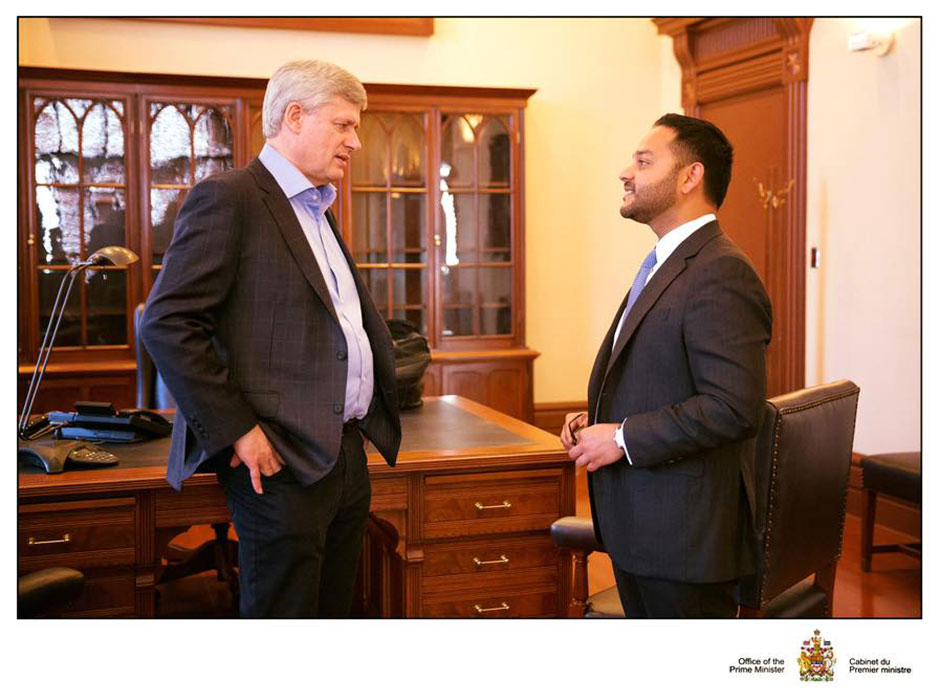 Although his name appears nowhere in news archives as holding a formal position on Kenney’s campaign, another trove of UCP e-mails obtained by PressProgress last week show Majumdar’s role was so senior he issued orders to Blaise Boehmer, Kenney’s communications director.

In one e-mail, Majumdar directed Boehmer to “cue up” one of the kamikaze donors to do media appearances attacking Kenney’s top rival, Brian Jean.

A briefing note prepared for US Environmental Protection Agency administrator Scott Pruitt in 2017 identifies Majumdar as a “member of the executive team at Harper & Associates,” who has worked closely with Harper “in establishing their international business consultancy.”

Majumdar’s role in right-wing politics goes deeper, with the briefing note identifying him as a senior fellow at the Macdonald-Laurier Institute and crediting him with “helping establish the Calgary-based Manning Centre for Building Democracy.” 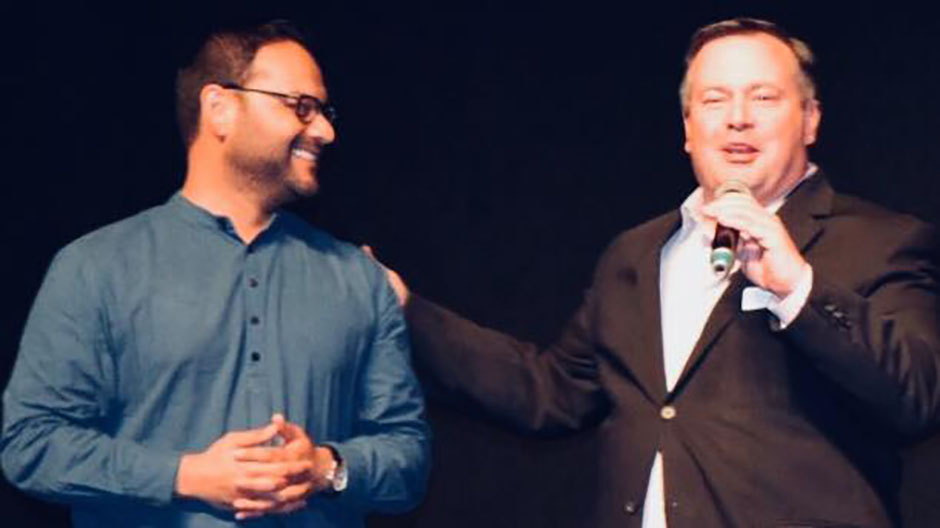 One day earlier, Davies had sent the same document to Wolf, who now serves as Kenney’s deputy chief of staff. 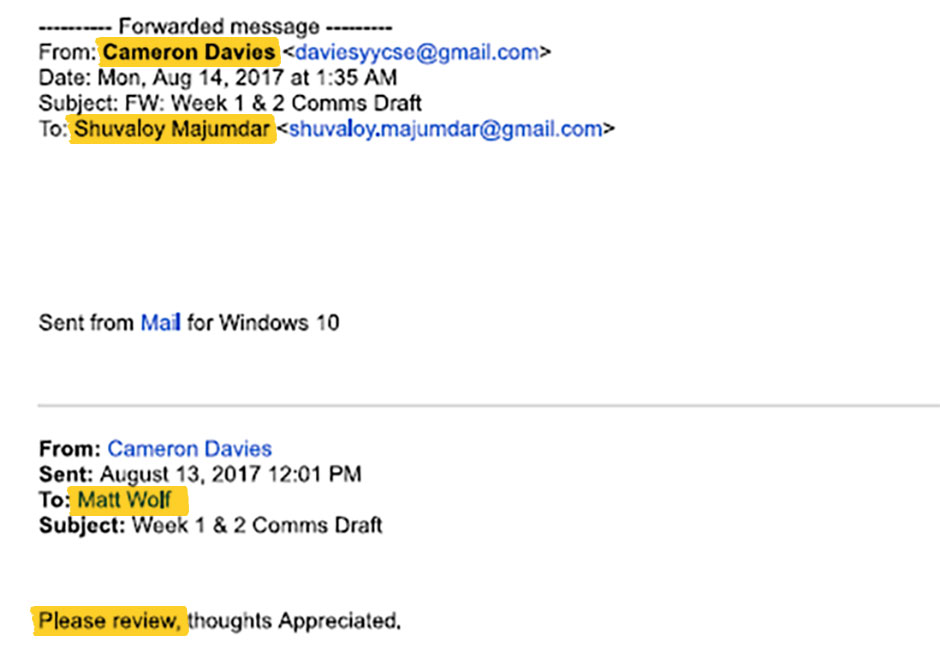 On week one, Callaway would plant “seeds of doubt” about Jean, before later raising questions about “consistency,” “trust” and “temperament,” the document says.

Most notably, the e-mail shows Majumdar and Wolf were not only aware Callaway would drop-out of the race, the document suggests they could veto the timing.

The document suggests “Jeff drops” around mid-September, although Davies adds: “depending when debates are you may have other ideas?” 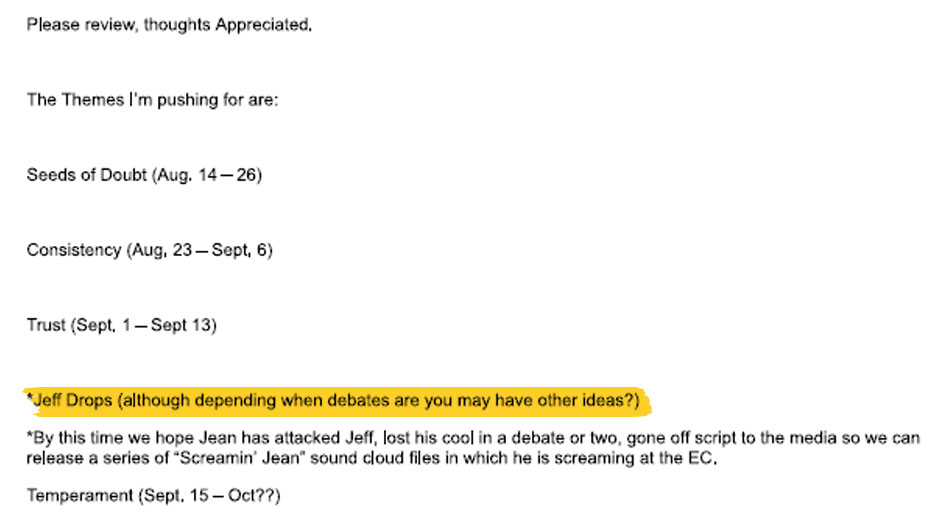 Neither Majumdar nor Harper & Associates responded to a list of questions from PressProgress inquiring about Majumdar’s role in Kenney’s campaign and what Stephen Harper knew about his executive’s involvement in the campaign.

“Jason Kenney received an overwhelming mandate from Alberta’s conservatives to lead us into the next election,” Harper said in his statement.

“Personal ambition and fighting old battles must take a backseat to the best interests of our province.”

Harper’s statement, tweeted at 8:30 am Thursday morning, was released only three hours after the Calgary Sun’s Rick Bell published a story claiming Jean was planning to hold a press conference last week to announce his return to provincial politics.

Jean did not hold a press conference and he later dismissed the claims published by the Calgary Sun as “crazy rumours.”