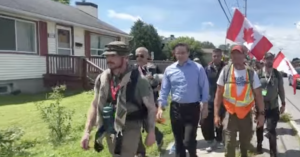 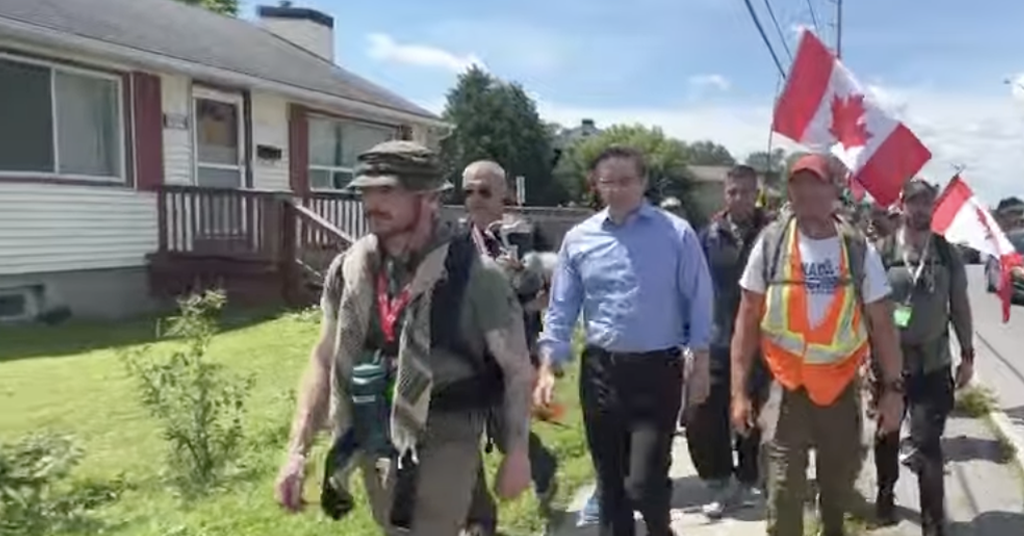 The march — which began in a suburban strip mall 15 km from Parliament Hill and ended in violence at the National War Memorial — included key figures from the Ottawa convoy occupation and others with far-right and extreme views.

Poilievre joined the group at a Loblaws parking lot and marched down a stretch of Baseline Road that is lined by family homes between Woodroffe Avenue and Merivale Road in the suburban Ottawa area of Nepean. 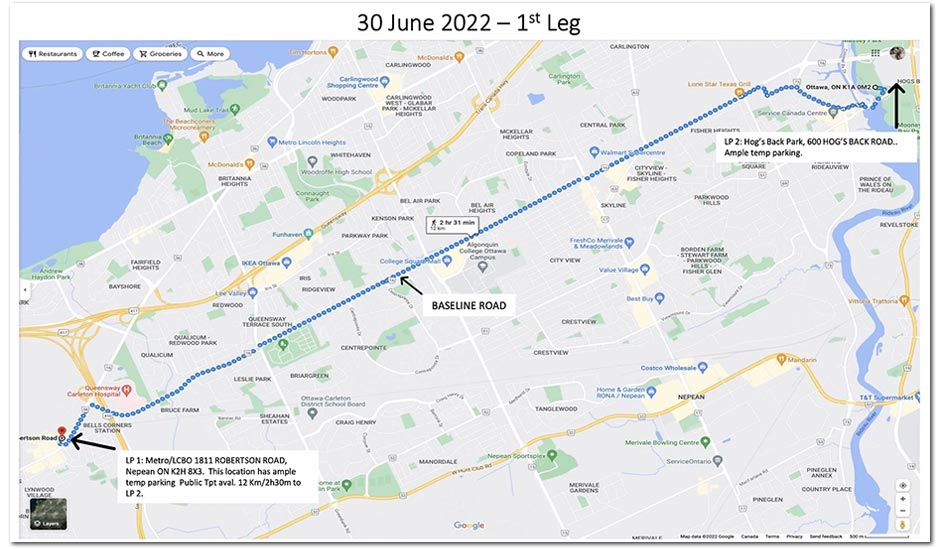 The surrounding residential area generally skews older than other Ottawa-area neighbourhoods — one-quarter of area residents are older than 65.

Poilievre walked at the front of the march alongside lead organizers for several blocks before being whisked away by handlers at the next major intersection.

“End all mandates. Restore our freedoms. Let people take back control of their lives,” Poilievre’s leadership campaign tweeted later in the afternoon.

Poilievre faced immediate criticism for aligning himself with a group of marchers that has documented ties to extremism and the organizers of the convoy occupation.

The march was started by James Topp, a Canadian Forces reservist who was inspired by the convoy to do a Terry Fox-style march across Canada to raise awareness about his opposition to COVID-19 public health restrictions.

Topp’s website lists official “partnerships” with anti-vaccine groups. He has also promoted his march through numerous appearances on far-right video channels, including one appearance on a channel run by a man with links to a far-right secessionist group who expressed hope the convoy would be “our January 6 event.”

Several social media influencers associated with February’s convoy occupation were also at the march, including Jim Kerr who runs the YouTube channel Church of Bubbles — Kerr was arrested and had his vehicle towed by Ottawa Police in April. 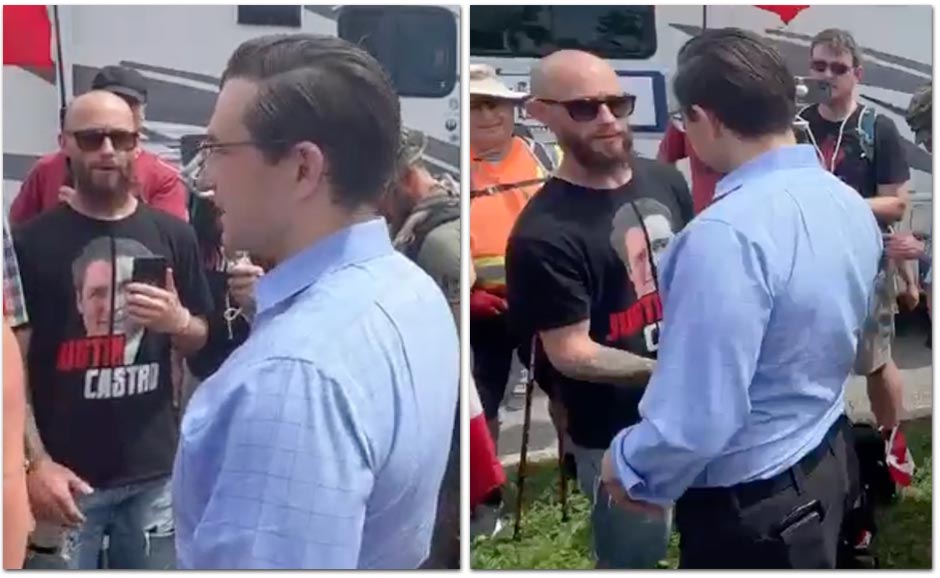 Local community leaders say it is particularly disturbing that a leadership candidate for a major political party would encourage people with extreme or hateful views to march down streets lined with family homes.

Poilievre marched through the centre of the riding of Ottawa West–Nepean, which is represented federally by Liberal MP Anita Vandenbeld and provincially by newly elected NDP MPP Chandra Pasma.

“It was disturbing for people in our community to see protesters promoting hateful views march through the heart of our community and deeply disappointing to see elected officials encourage them and march alongside them,” Pasma told PressProgress.

“As leaders, we have an obligation to be clear that hate has no place here and neither does disinformation that tears at the heart of our democracy.”

At the municipal level, the area is represented by Councillor Rick Chiarelli, who appeared in multiple videos with a far-right vlogger and other convoy supporters  back in February.  Chiarelli did not respond to requests for comment from PressProgress.

Ariel Troster, who has spoken out about the convoy’s impacts on residential areas and is standing as the candidate for Somerset Ward in this fall’s municipal election, said the ongoing campaign by far-right extremists is unsettling everyone in Ottawa.

“Everyone I speak to who lives in downtown Ottawa is still experiencing a form of collective trauma after surviving the convoy occupation in the winter,” Troster told PressProgress. “People dealt with harassment and symbols of hatred in the neighbourhoods where they live and work.”

“My daughter’s school was close to one of the main gathering points and she experienced significant panic attacks and fear of walking down our own street.”

Troster said that “whatever grievances these folks have against Trudeau,” they are only taking out their anger on Ottawa’s working-class communities.

“Every time another part of the city is fortified, these folks push the boundaries further into other residential neighborhoods,” Troster said. “These extremists are punishing working class people who hold very little political power.”

“Pierre Pollievre should be ashamed for encouraging it.”

Members of the rag tag movement revolving around opposition to COVID-19 public health restrictions have repeatedly displayed disruptive behaviour in spaces both inside and outside hospitals, elementary schools, shopping malls, airports and the private homes of politicians.

“Marching through residential streets when they know full well how most residents of Ottawa feel toward them after the convoy, shows how emboldened they are,” Simons told PressProgress. “They just don’t seem to care.”

“They believe they are on the right side and little will dissuade them of that, even when it disrupts the lives of regular people in the city,” Simons said.

“Poilievre marching with them, even briefly, is not helping those matters.”

Poilievre’s alignment with the convoy has been controversial within his own party — former Conservative Senate leader Marjoie LeBreton recently resigned from Poilievre’s riding association citing his displays of support for the convoy occupiers.

Poilievre’s leadership campaign did not respond to requests for comment from PressProgress.