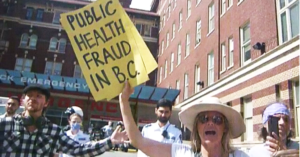 An anti-lockdown march in downtown Vancouver nearly spiralled out of control when dozens of protesters surrounded a hospital entrance and began berating frontline healthcare workers.

Vancouver’s anti-lockdown protests are mainly organized by anti-vaccine activists, along with a flat earth conspiracy group and individuals linked to far-right politics who promote the events through a web of private Facebook groups.

Multiple videos live streamed by participants show the crowd marching down the middle of Burrard Street on Sunday afternoon, before coming to a stop in front of the ambulance bay at St. Paul’s Hospital.

One protester shouted into a megaphone that they wanted to “talk to the doctors.”

Protesters can be heard directing chants of “no vaccines” and “let us in” at several healthcare workers who wandered outside the emergency room in their protective masks and medical scrubs.

“The hospitals are empty,” yelled one protester, along with others who are heard shouting “tell the truth” and demanding to know: “What are you hiding?”

“You’re all corrupt,” shouted another. 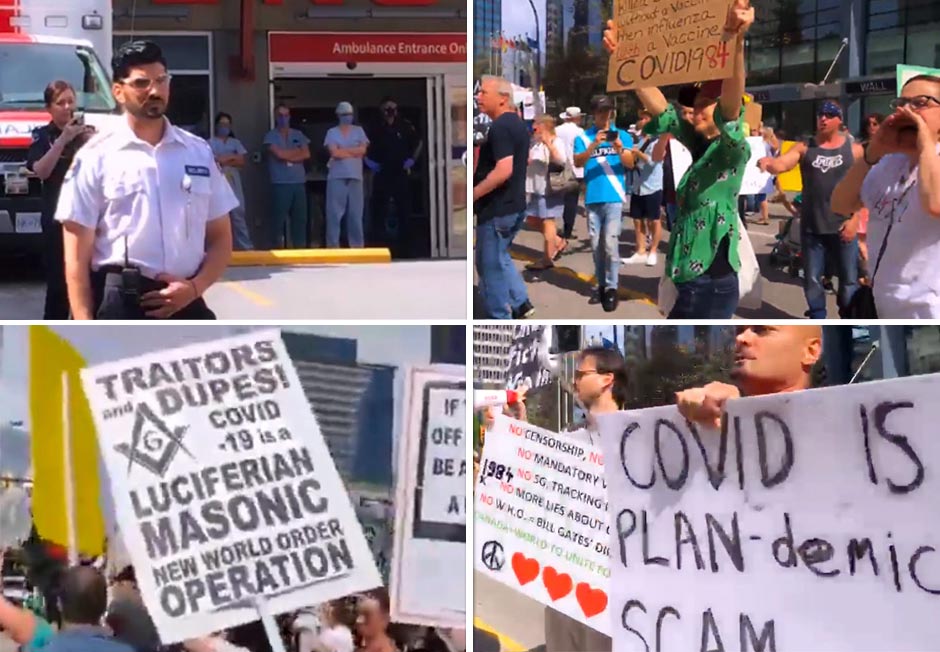 Previous marches by the same group through downtown Vancouver have seen some protesters heckle self-isolating residents on their condo balconies. There have been several skirmishes with bystanders that nearly turned violent and protesters have complained they’ve been pelted with eggs.

As the crowd heckled healthcare workers, one protester aggressively approached one of the police officers escorting protesters through downtown Vancouver.

The officer can be seen dismounting his motorcycle to follow the man before being swarmed by several protesters  — one woman can be seen repeatedly grabbing at the officer’s back and arms.

“You’re dismissed,” one protester is seen shouting at the officer. “Go do your job.”

“Don’t you do that to me or you’ll go to jail,” the officer can be heard telling someone else in the crowd.

As the officer disengaged and returned to his vehicle, the emboldened anti-lockdown protesters began chanting: “We are not scared.”

In a statement to PressProgress, the Vancouver Police Department said it was “aware of the situation” and felt its “response was appropriate and proportionate to the activities observed.”

“We police hundreds of events each year and do our best to facilitate an individual’s right to have their voice heard while working to ensure that their rights do not infringe on the use and enjoyment of another person,” a police spokesperson said.

A spokesperson for St. Paul’s Hospital confirmed security responded to protesters but said there were thankfully no “disruptions” to hospital services.

“We would ask the public or any protesters to be wary of blocking access to emergency vehicles and ambulances,” the hospital spokesperson said. “We wouldn’t want to endanger patients’ lives with reckless behaviour from a small minority of protesters that choose to block the emergency bay.”