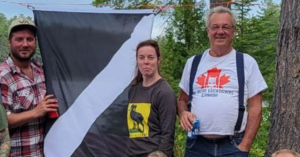 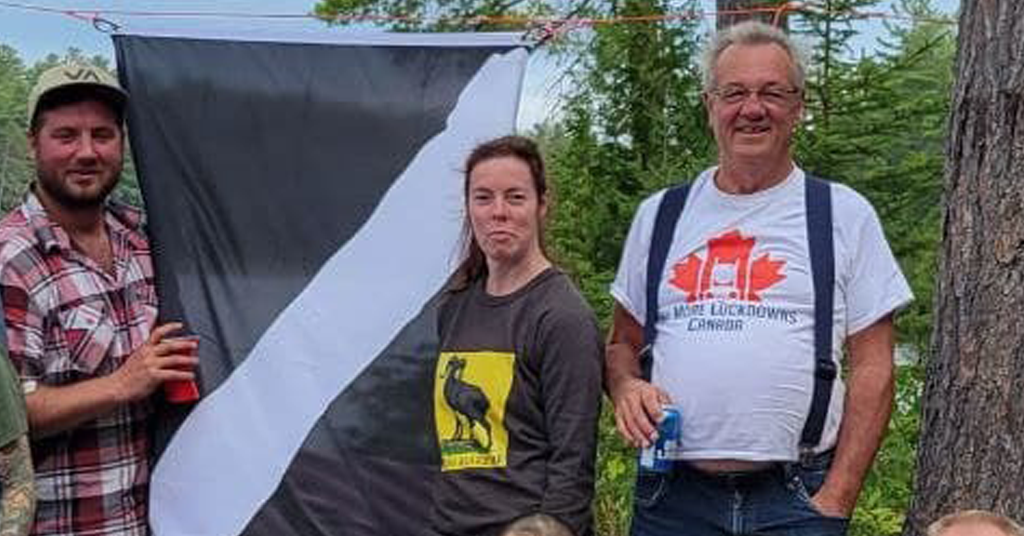 Hillier went camping with supporters of a far-right secessionist group

Photos from a camping trip show Ontario MPP Randy Hillier posing with the flag of a far-right secessionist group linked to conspiracy to murder charges and firearms seized en route to the Coutts border blockade.

Hillier, the sitting MPP for Lanark–Frontenac–Kingston, who was kicked out of Doug Ford’s party for mocking parents of autistic children, has been one of the main political leaders of the convoy that has occupied downtown Ottawa for nearly three weeks.

Throughout the pandemic, Hillier has also been a top organizer against COVID-19 public health measures through his “No More Lockdowns” group, but photos suggest Hillier has increasingly courted the support of dangerous extremists.

One photo obtained by PressProgress, which was originally posted on a far-right TikTok account, shows Hillier wearing a “No More Lockdowns” t-shirt while holding an open can of beer next to a flag of the “Diagolon.” 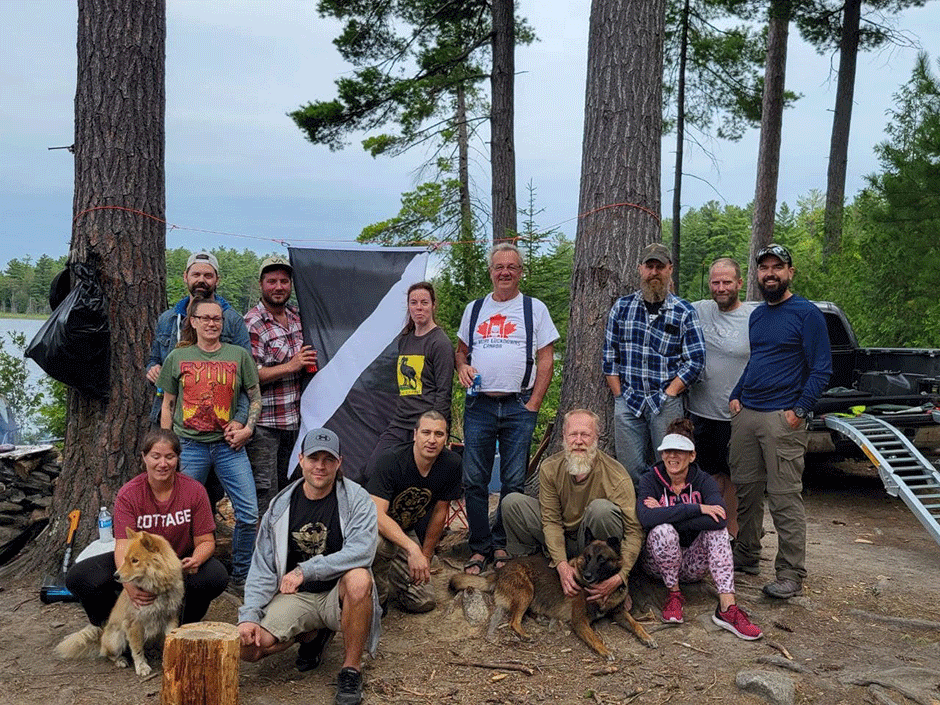 The flag is a symbol of a neo-fascist group called the “Plaid Army,” which has been spotted at the centre of the chaos in downtown Ottawa.

The Plaid Army is a far-right secessionist group that wishes to stage a violent revolution in order to establish a new “Diagolon” country which would join the Canadian West with parts of the United States.

The group’s leaders have been documented engaging in Holocaust denial and expressing sympathy towards Adolf Hitler.

According to the Canadian Anti-Hate Network, the group is evolving into a neo-fascist militia:

“Diagolon is increasingly becoming a militia network. Their goals are ultimately fascist: To use violence to take power and strip rights away from people who do not meet their purity tests based on ideology, race, and gender. With power or permission, they would execute their perceived enemies. Their motto is ‘gun or rope’.” 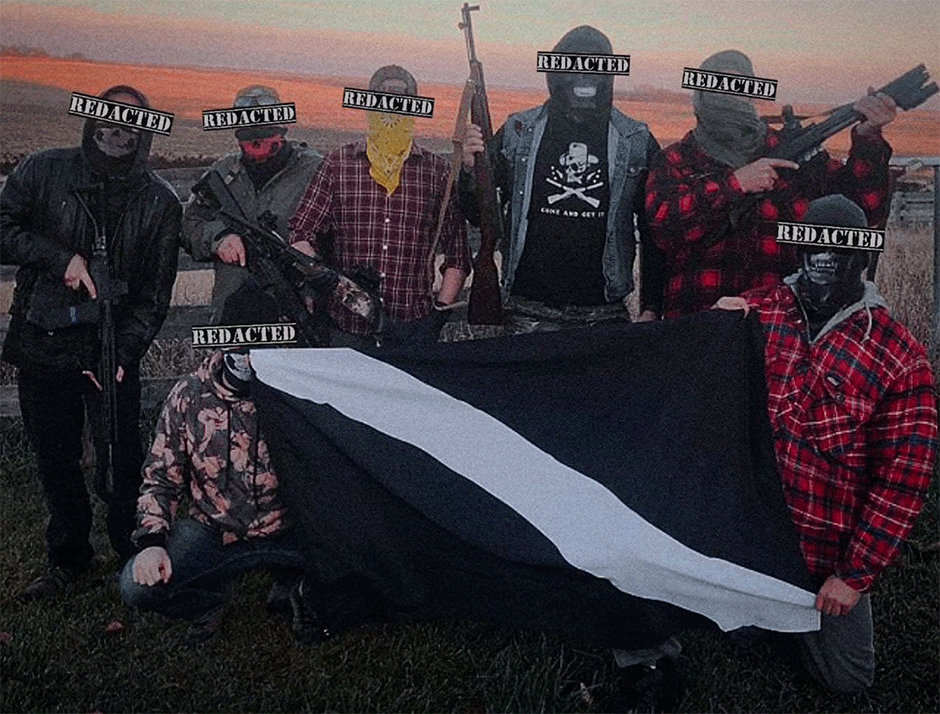 The defacto leader of Diagolon is Jeremy MacKenzie, a far-right livestreamer who has previously invoked “accelerationist” rhetoric alluding to efforts to destabilize public institutions in order to collapse the social order and bring about a race war.

An RCMP search warrant revealed MacKenzie allegedly livestreamed video of himself pointing a gun at the head of a man in a Cape Breton restaurant last month.

MacKenzie has proudly promoted the Neo-Nazi book “Day of The Rope” on several social media broadcasts.  Day Of The Rope is a dystopian power-fantasy novel that takes its title from the “Turner Diaries” — describing a mass hanging of racial minorities and “race traitors” led by the novel’s protagonist.

Hillier has been a guest on MacKenzie’s stream and the two men have appeared in photos socializing together. 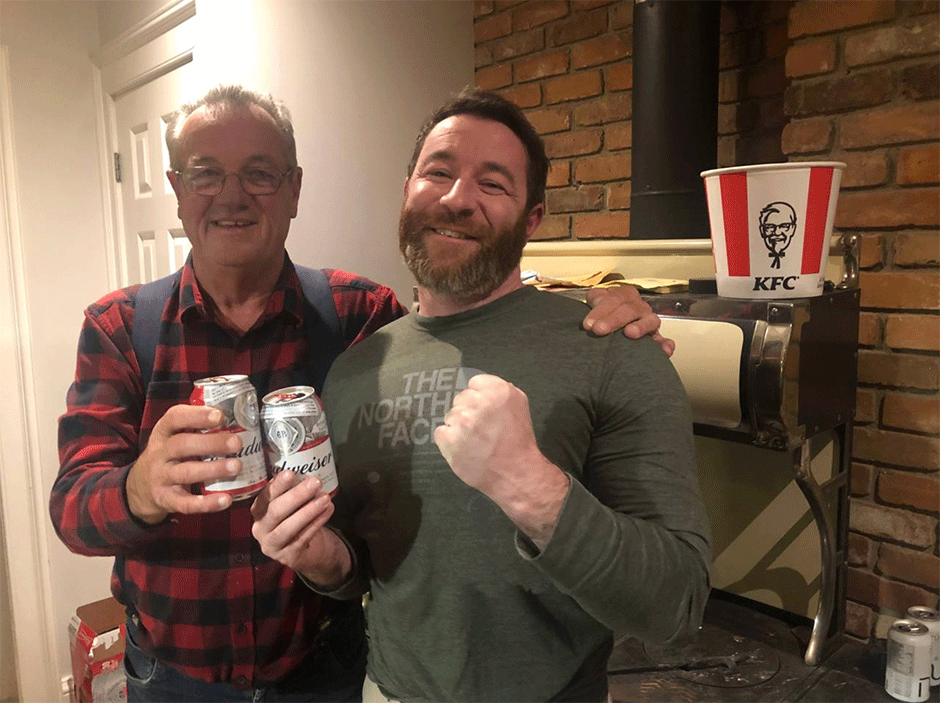 Last week, police seized a truck load of guns and body armour from four men associated with the convoy blockade in Coutts.

They also faced conspiracy to murder charges, part of what the RCMP alleges was a plot to murder its own officers. Those charges have not yet been tested in court.

Photos released by the RCMP show that the body armour featured patches that display the Diagolon logo.

Photo of items seized as a result of last night’s search warrants at the Coutts border blockade. https://t.co/Rve2jtvVX0 pic.twitter.com/3szbXlKrJl

BREAKING: Gear seized by police at #Coutts includes a plate carrier with Diagolon patches. Diagolon is an accelerationist movement with members and chapters across Canada. Its de factor leader is Jeremy MacKenzie.
1/pic.twitter.com/SPTrbXkOjh pic.twitter.com/z7J9ZdCjUk

According to the Toronto Star, Chris Lysak, one of the men arrested in Coutts, was flying the Diagolon flag outside their home. Lysak’s father told The Star the flag symbolized how his son had become radicalized online during the pandemic.

Photos show Lysak and MacKenzie socializing together, as well.

CBC News has also reported that another man arrested in Coutts, Chris Carbert, interacted with MacKenzie on social media.

“Several of the individuals at Coutts have strong ties to a far-right extreme organization with leaders who are in Ottawa. We’re talking about a group that is organized, agile, knowledgeable and driven by an extremist ideology where might makes right.”

Hillier, who is getting ready to run under his newly created Ontario First Party in this spring’s election, has also been caught in photos with QAnon supporters and faced calls for his expulsion from Queen’s Park.

Hillier did not respond to multiple requests for comment from PressProgress.