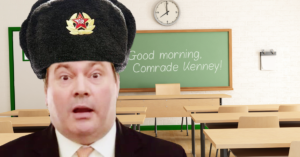 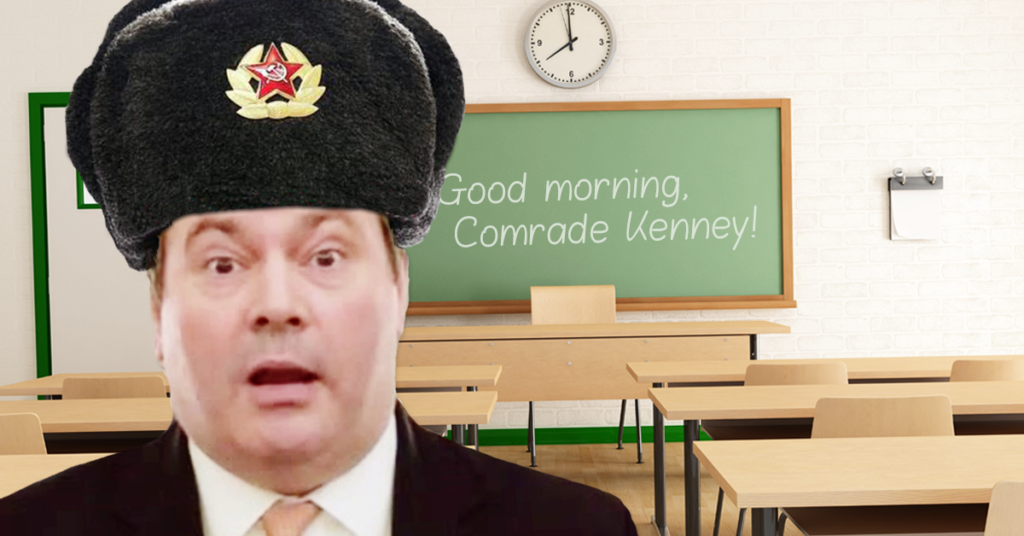 Don't worry, Jason Kenney’s warnings have no basis in reality

Jason Kenney is warning supporters that Alberta Premier Rachel Notley is quietly working to confuse children about their gender identity.

And according to the United Conservative Party leadership candidate, one way Notley’s government is trying to change Alberta is by formally addressing school children as “comrades.”

Alarming stuff, aside for one small issue: Kenney’s warnings have no basis in reality.

Speaking to party loyalists at a Strathmore, Alberta rally organized by disgraced ex-UCP MLA Derek Fildebrandt over the weekend, Kenney declared he’s less concerned about the economy these days than he is by “something else” – namely, the NDP’s secret plan to brainwash school children:

“I believe the NDP actually wants to change our political culture – who we are and what we value as Albertans. And do you now how they intend to do that? Through the education system.”

And believe it or not, Kenney says it gets even worse.

Going out of his way to stress he’s “not making this up,” Kenney caused his supporters to gasp out loud when he described a “document” outlining a plan forcing Alberta school children “to be referred to as, quote, ‘comrades’.”

“What I’m about to tell you, I’m going to warn you, you’re going to think, you’re going to dismiss it as what Donald Trump would call ‘fake news’. But it’s real … What they say in this document is that boys and girls should now be referred to as, quote, ‘comrades’. I’m not making this up.”

Kenney also took aim at sex-ed in schools, portraying it as a subject for “grown-ups” to debate and suggesting children should not be exposed to a pseudoscience he dismisses as “unscientific gender theory.”

That’s a pretty interesting thing for Kenney to say considering he once suggested same-sex marriage would open the door to polygamy and incest.

And echoing his controversial comments earlier this year that he would report teenagers participating in gay-straight alliances to their parents, Kenney also suggested issues relating to sexuality and gender should require parental consent too:

“…apparently it’s, I dunno, ‘discriminatory’ or something to call a boy a girl, a boy or a girl. Listen, if grown-ups want to spend their time debating unscientific gender theory, hey, it’s a free society, I have no problem with that. No skin off my back. But can we please agree not to encumber children who are not old enough to tie their own shoes with fundamental confusion about their identity and never to do so without the knowledge and consent of their parents.”

To be clear: no document exists showing the Government of Alberta is planning to force teachers and students to greet one another as “comrade.”

What Kenney is actually referencing is a booklet offering teachers background info on how to have “safe and caring discussions about sexual and gender minorities” – once again, nothing in the booklet is mandatory.

One section of the booklet encourages teachers to reflect on how addressing groups with gendered language (“ladies and gentlemen,” “boys and girls” and the like) can reinforce “rigid” ideas about gender.

Kenney has seemingly plucked one word out-of-context from a chart showing 20 gender-neutral synonyms that can be used interchangeably to address groups of people, appearing alongside words like “friends,” “folks” and “people,” to portray  a booklet promoting respectful and inclusive conversations on LGBTQ issues as a sign Alberta schools are being run like they’re under Stalinist rule.

Then again, Kenney also thought former Progressive Conservative Premier Peter Lougheed was so far-left it felt like Alberta was under “neo-Stalinist” rule too.

And although Kenney claims a 2016 CBC News article proves what he’s saying isn’t “fake news,” CBC News actually attributes the allegation to a social conservative blogger named Theresa Ng, identified by CBC as “a critic of a new LGBTQ guidebook for Alberta teachers.”

Ng has written that “the family is under direct attack” by Alberta’s Department of Education and she criticizes Alberta schools for refusing to refer students to discredited conversion therapies she claims can “fix, change or repair a student’s sexual orientation, gender identity, or gender expression.”

Earlier this year, Ng said she was granted a one-hour meeting with Kenney where she warned the ex-PC leader school children are being exposed to “sexually graphic material.” Kenney was reportedly “attentive” and “impressed with the effort.”

Parents for Choice in Education, a homophobic group that works alongside Ng, has endorsed Jason Kenney’s UCP leadership bid and is organizing supporters to vote for Kenney.

The group is also listed as the one and only source cited in a background paper Kenney released detailing his policies on education.