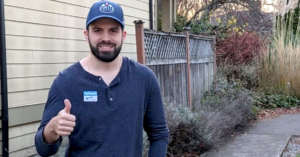 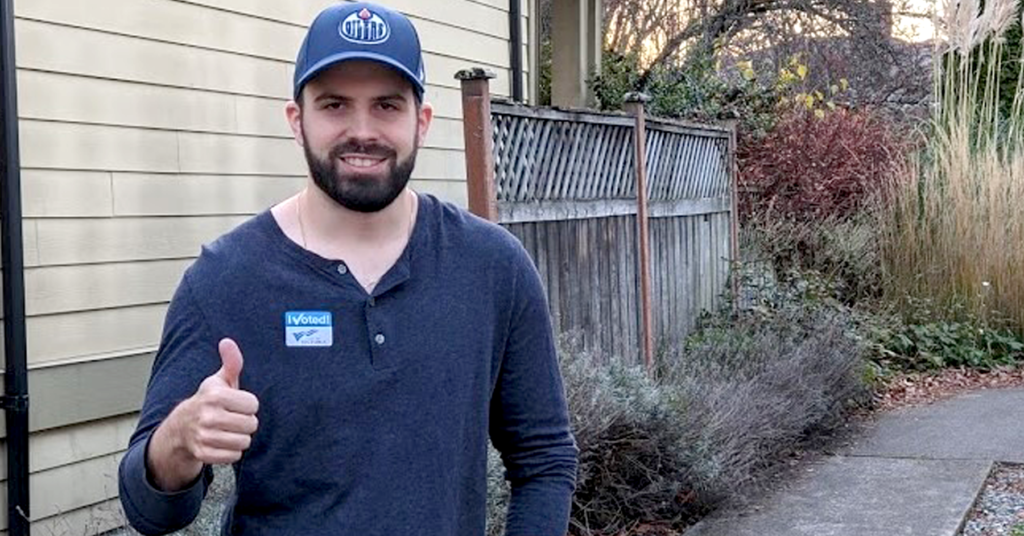 Right-wing social media influencer Aaron Gunn is telling his supporters he thinks the BC Liberals need a “total overhaul” and a “new name,” as he publicly mulls a run to be the party’s next leader.

If he decides to run, the right-wing meme warrior could replace Andrew Wilkinson, who recently resigned as leader months after the BC Liberals’ election defeat last fall. Although a date for the vote is yet to be set, the party’s constitution states a new leader must be in place by February 16, 2022.

Until last year, Gunn served as spokesperson for BC Proud, a right-wing Facebook meme page linked to the Canada Proud third-party advertising network.

Prior to that, Gunn ran the Canadian Taxpayer Federation’s “Generation Screwed,” a campaign that sought to market fiscally conservative policies to millennials. During a right-wing Manning Centre conference in 2015, he told reporters he identifies as a “small-c conservative.”

This month, Gunn suggested steering the party to the hard right and changing its name after an anonymous website called “Draft Aaron Gunn” began promoting his potential candidacy.

The BC Liberals “undoubtedly needs a total overhaul (starting with a new name) and a true outsider to lead it, if it has any chance to survive,” he told his 42,000 Facebook supporters on February 3. 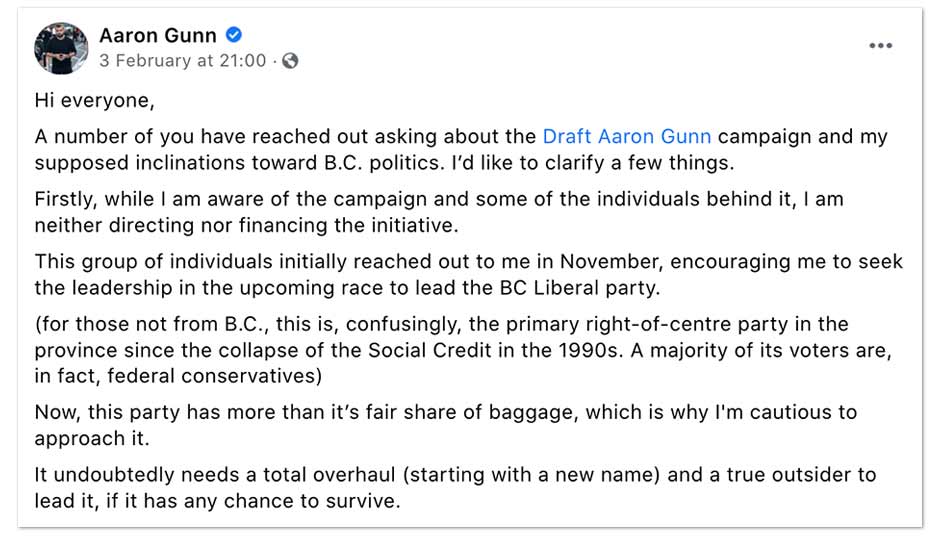 A number of BC Liberals think Gunn would be an awkward pick to lead them.

Alex Shiff, a former senior BC Liberal staffer, tweeted: “I can’t imagine a less qualified candidate than someone who propagates and monetizes misinformation, cultural grievance and social media mob mentality.”

“I haven’t decided who I will support, but I will do everything in my power to oppose this candidacy,” he added.

Mark Marissen, a BC Liberal political strategist, said Gunn “should not be green-lit by the BC Liberal Party if the party wants to be taken seriously by mainstream British Columbians.”

Marissen describes Gunn as an “ideological polemicist” who is “mobilizing a Trumpian digital army to wreak havoc” on the BC Liberals, suggesting his views would be more at home in Maxime Bernier’s far-right People’s Party.

This guy should not be green-lit by the BC Liberal Party if the party wants to be taken seriously by mainstream British Columbians.

Maybe he can work with Maxime Bernier to create a provincial “Peoples Party.”#bcpoli #cdnpoli https://t.co/yO5Mq3GmRW

After agreeing to respond to questions from PressProgress, Gunn issued several tweets Monday evening warning his followers that PressProgress was planning a “hit piece” against him, alleging the yet-to-be published article lacked “basic fact-checking” and even contained facts that were “fabricated.”

Gunn refused multiple requests from PressProgress seeking to clarify which facts he believes were fabricated.

On his Facebook page, Gunn has produced numerous videos on controversial topics, including videos about “cancel culture” and homelessness, going so far as to call one homeless encampment in Victoria a “drug infested slum.”

During his time as BC Proud spokesperson, Gunn appeared in a video critical of diversity initiatives in the Canadian Forces. He accused military recruiters of “social engineering” and fumed: “When it comes to Canada’s military, apparently white males need not apply.”

The potential BC Liberal leadership candidate’s video included a caption that claimed “Justin Trudeau is the real racist,” despite the original article he was reacting to making no mention of the Liberal prime minister. 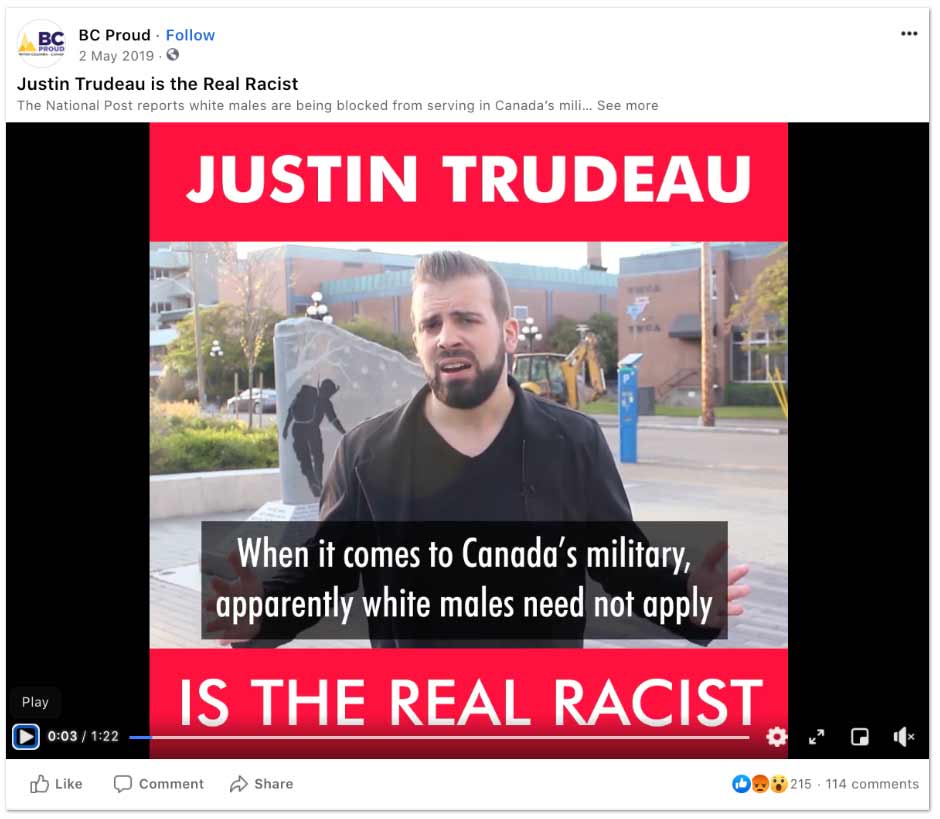 Gunn also raised eyebrows after opting to go to Rebel Media for an “exclusive” interview to discuss his future and vision for the BC Liberal party.

Rebel Media’s Keean Bexte called Gunn an “unapologetic populist conservative” who has been “advocating for every populist issue under the sun,” someone who could “rebuild the BC Liberals from the ground up.”

Gunn’s “exclusive” interview with Bexte was not his first rodeo with Rebel Media — in 2017, the possible BC Liberal leadership candidate helped organize a “free speech” event at the University of Toronto that included Ezra Levant and Jordan Peterson as speakers.

According to The Varsity, the event was reportedly attended by a pair of white nationalist commentators — Lauren Southern and Faith Goldy.

In 2019, Gunn delivered a keynote speech at an event hosted by “Freedom Defence Canada,” an organization led by former federal Conservative MP Reed Elley that promotes far-right narratives about “cultural Marxism” and “globalism.”

In a series of blog posts, the organization accuses “banks and corporations” of plotting to advance “the LGBTQ agenda” and claims “gay marriage,” “transgenderism” and “polyamorism” are contributing to “the weakening of our society.”

It has also decried “woke’ culture,” which it describes as “a subset of the social justice movement arising out of black America” that has “damaged and weakened the foundations of western culture.”

Internal divisions over social issues riled the BC Liberal Party in the months leading up to last year’s provincial election. The party was banned from Vancouver’s Pride parade after PressProgress reported 14 BC Liberal MLAs had used taxpayer dollars to buy ads in a magazine that regularly publishes anti-LGBTQ content.

During the election campaign itself, the party came under fire after a leaked video showed BC Liberal MLAs making sexist comments about a BC NDP MLA, while Chilliwack-Kent candidate Laurie Throness resigned after comparing birth control to “eugenics.”

To date, the only confirmed leadership candidate to replace Wilkinson is BC Liberal MLA Ellis Ross, who responded to questions about his interest in running for leader by telling reporters: “I guess I’m doing it.”