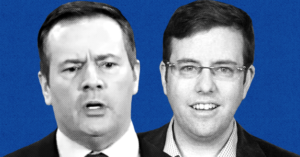 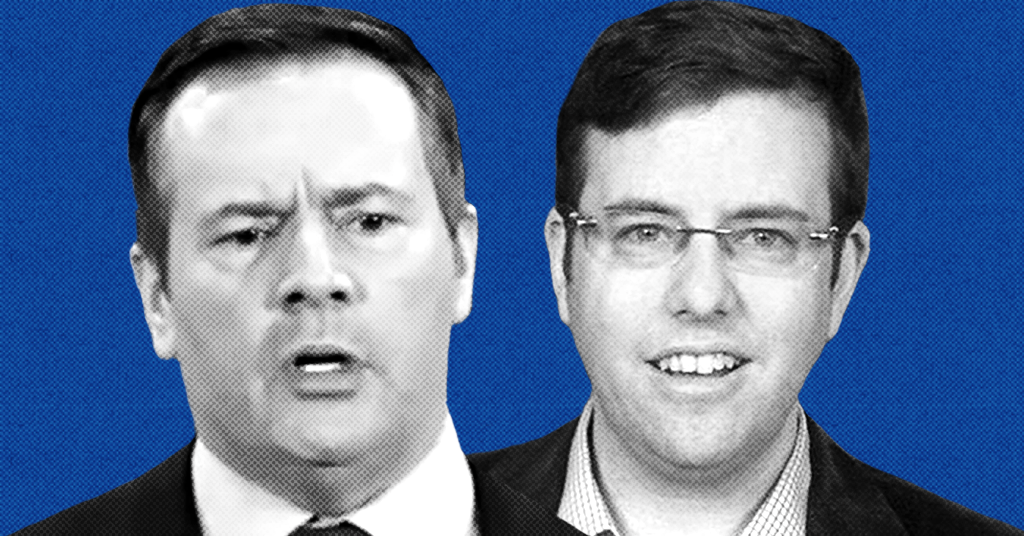 United Conservative Party officials were alerted to concerns about the integrity of the party’s online voting system and the process used for voter registration in the 2017 UCP leadership vote.

Hamish Marshall, the campaign manager for Brian Jean’s leadership campaign, told UCP officials he worried about the online voting system and the “complete absence of scrutineering opportunities in the qualifying and voting process.”

Marshall, a founder of Rebel Media and federal Conservative leader Andrew Scheer’s 2019 campaign chair, even raised the possibility of taking the UCP to court over the party’s online voting system and loose rules on signing up new members.

According to a trove of leaked UCP e-mails obtained by PressProgress and several other news outlets last month, Marshall wrote to Steven Dollansky, the UCP’s legal counsel, threatening to issue a statement to the media and suggesting he might even “seek court intervention.”

They “threatened to sue the Party if they didn’t get their way,” Jason Kenney’s deputy chief of staff Matt Wolf recalled in another leaked e-mail. 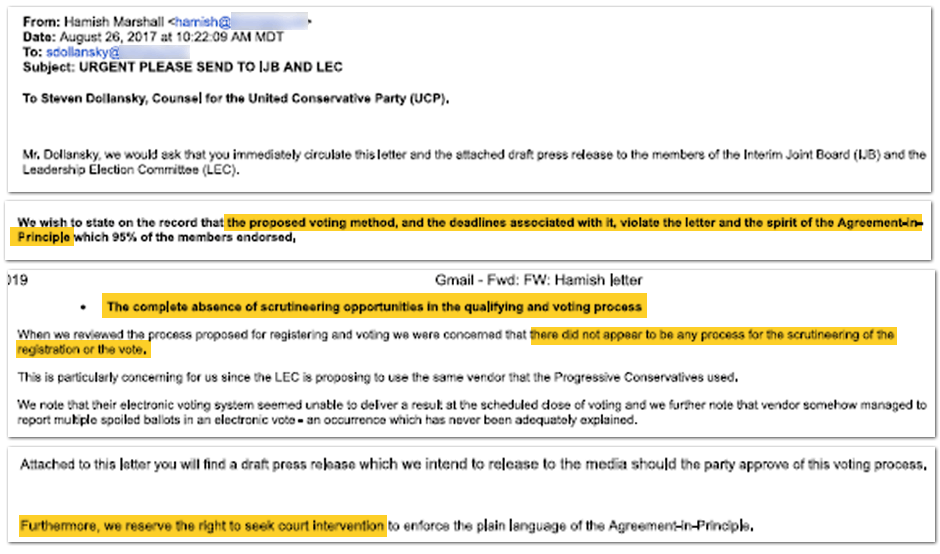 Marshall would not confirm sending the e-mail, suggesting he had “no clue” what PressProgress was talking about, before declining comment altogether.

“I don’t have any need to comment on any of that stuff,” Marshall said, adding that he believes Kenney “won the leadership race fair and square.”

But multiple UCP sources who personally received copies of the e-mail confirmed to PressProgress Marshall did, in fact, author the e-mail dated August 26, 2017.

In the leaked e-mail, Marshall complains about last-minute rule changes that he argued violated the United Conservative Party’s founding agreement.

“We wish to state on the record that the proposed voting method … violates the letter and the spirit of the Agreement-in-Principle which 95% of the members endorsed,” Marshall wrote.

While the e-mail touches on several concerns, Marshall notably hones in on a lack of “scrutineering” in the “registration” of UCP members:

“When we reviewed the process proposed for registering and voting we were concerned that there did not appear to be any process for the scrutineering of the registration or the vote.

This is particularly concerning for us since the (Leadership Election Committee) is proposing to use the same vendor that the Progressive Conservatives used.”

One high-ranking UCP source, who was familiar with the e-mail, told PressProgress Marshall was concerned by the lack of transparency and oversight in how the party managed the registration of party members who could then go on to vote, describing the UCP’s internal safeguards as simply an “honour system.”

The UCP source said Marshall and others were “f—king livid” because the party was “creating electronic voting and mechanisms whereby Jason can cheat in the ethnic communities.”

Marshall’s e-mail may be viewed with new significance in light of reporting from PressProgress Tuesday evening that revealed RCMP investigators are actively questioning participants in the 2017 UCP leadership vote.

A campaign worker on the Jason Kenney leadership campaign told PressProgress he was asked detailed questions by RCMP investigators about how membership data was collected and inputted into the party’s internal database.

On Wednesday, CBC News reported it had identified dozens of “fraudulent e-mails” that were successfully used to cast votes during the 2017 UCP leadership vote.

Kenney has stated his party’s 2017 leadership vote had the “most rigorous rules, controls and oversight of any leadership election in Canadian history.”

Correction: This story has been updated to correct the dates of two news articles which were cited in this report.