Alberta’s Election Commissioner has already penalized several people for making large donations with someone else’s money. Callaway’s campaign manager says the $60,000 was transferred to his personal bank account from a wealthy UCP donor and then laundered to Callaway through numerous fake donors.

One donor who is currently under investigation told a Calgary radio station Kenney had full knowledge all along, insisting: “Jason Kenney lied to the public.”

If Kenney is telling the truth, the whole truth and nothing but the truth, then he might start by explaining why his stories are at odds with the facts?

In an October 2017 interview with Global News, Kenney was asked point blank if his campaign was secretly working with Callaway’s campaign.

Chuckling, Kenney insisted Callaway is “his own person,” said he “made an honest effort” and commended him for “putting up tens of thousands of dollars to enter as a candidate.”

Callaway echoed Kenney, insisting “there’s no agreement or anything otherwise.”

Consider these two videos from 2017 back to back. In retrospect, it appears that they didn’t get their story straight. #ableg #cdnpoli #abpoli 1/2 pic.twitter.com/p49kvU4qby

Jeff Callaway on why he pulled out of 2017 leadership race. #ableg 2/2 pic.twitter.com/Yz1LMzwIdH

Yet a trove of leaked e-mails obtained by PressProgress and other media outlets cast doubts on the truth of Kenney and Callaway’s statements.

In fact, the leaked e-mails show Matt Wolf and Shuvaloy Majumdar, two of the most senior members of Kenney’s leadership team, were reviewing and editing Callaway’s confidential campaign strategy documents. 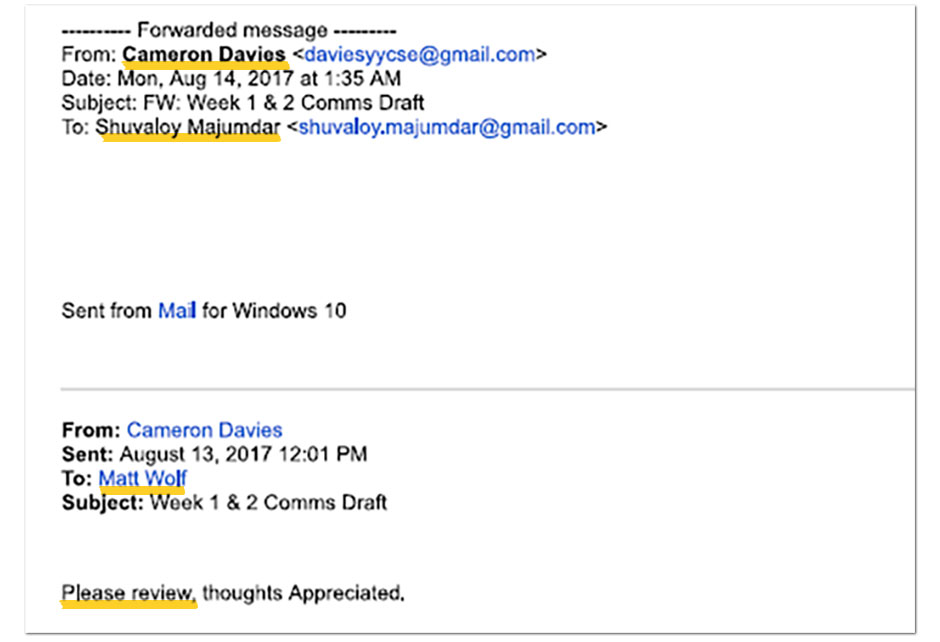 2. Kenney denied Callaway was running for the purpose of attacking Brian Jean even though Kenney’s campaign helped Callaway attack Jean 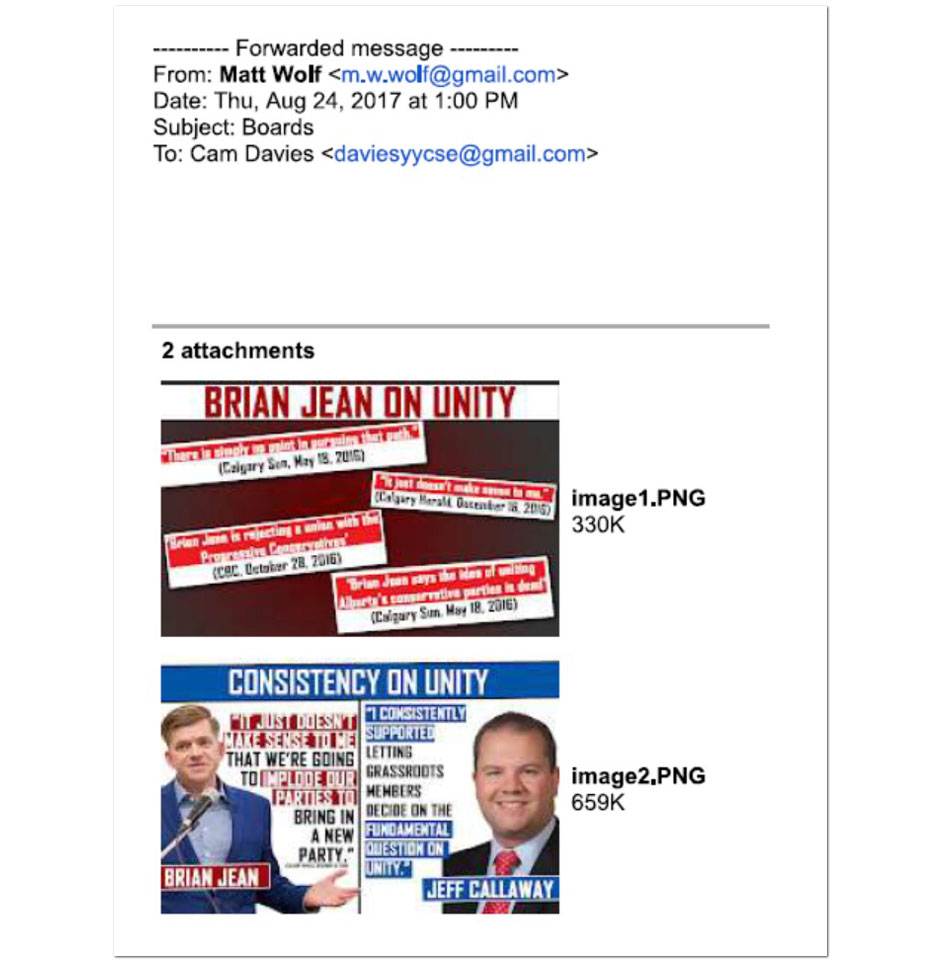 In another e-mail, Wolf was sent a strategy document that spelled out what Callaway’s campaign officials hoped to achieve before dropping out:

“By this time we hope Jean has attacked Jeff, lost his cool in a debate or two, gone off script to the media so we can release a series of ‘Screamin’ Jean’ sound cloud files in which he is screaming at the EC.”

Happy Mann, a “critical member” of Kenney’s leadership team and a $9,000 donor to Callaway, explained in a Facebook post that the motive behind the “kamikaze” campaign was to help Kenney run up the scoreboard with a “big win”:

“We agreed that Jeff Callaway will join the UCP leadership race as a candidate and will run a campaign aimed at discrediting Brian Jean. We felt that it was important for Jason Kenney to win decisively and that this could only be guaranteed if another candidate took away from Jean’s popularity. To show unity, we needed a big win.”

One leaked document mentioned a July meeting between Kenney and former UCP rising star Derek Fildebrandt to see if he would run as the “dark horse candidate,” but he said he later “decided against it.”

“When Jason Kenney says it’s false,” Fildebrandt said, “it’s just not true because he had asked me.”

3. Kenney said he was unaware of kamikaze scheme, even though multiple people at the centre of the scandal allege he’s not telling the truth

On March 15, Kenney told reporters he had “absolutely no knowledge whatsoever,” of the potentially illegal scheme, a claim he has reiterated numerous times.

“…nobody was aware of, had heard anything about, or in anyway participated in such activity.” – Jason Kenney 03/15/2018#ableg #abpoli #cdnpoli #kamikaze #abvote pic.twitter.com/l8PrartrPS

Yet Kenney’s claims have been contradicted by respected conservative figures and individuals at the centre of the scandal multiple times.

In January, former UCP MLA Prab Gill wrote to the UCP caucus informing them “there is strong evidence that laws were broken and Jason Kenney is alleged to have been directly involved in planning the Callaway campaign.”

Brian Jean also said he “personally wrote to Jason Kenney” in “late December and again in February” raising concerns about the scheme, suggesting Kenney wasn’t caught off guard about the allegations.

Meanwhile, Mann said Kenney was present at multiple meetings discussing the “kamikaze” scheme, including a planning meeting on July 19 and another meeting on October 5, one day after Callaway dropped out of the race.

Davies, Callaway’s campaign manager, backs up Mann’s allegation that Kenney was present and an active participant at the July 19 meeting too.

And two UCP operatives who were present at the meeting separately confirmed to PressProgress that Kenney personally presented Callaway with a bottle of Dark Horse whiskey as a gift for running his “kamikaze” campaign on October 5. 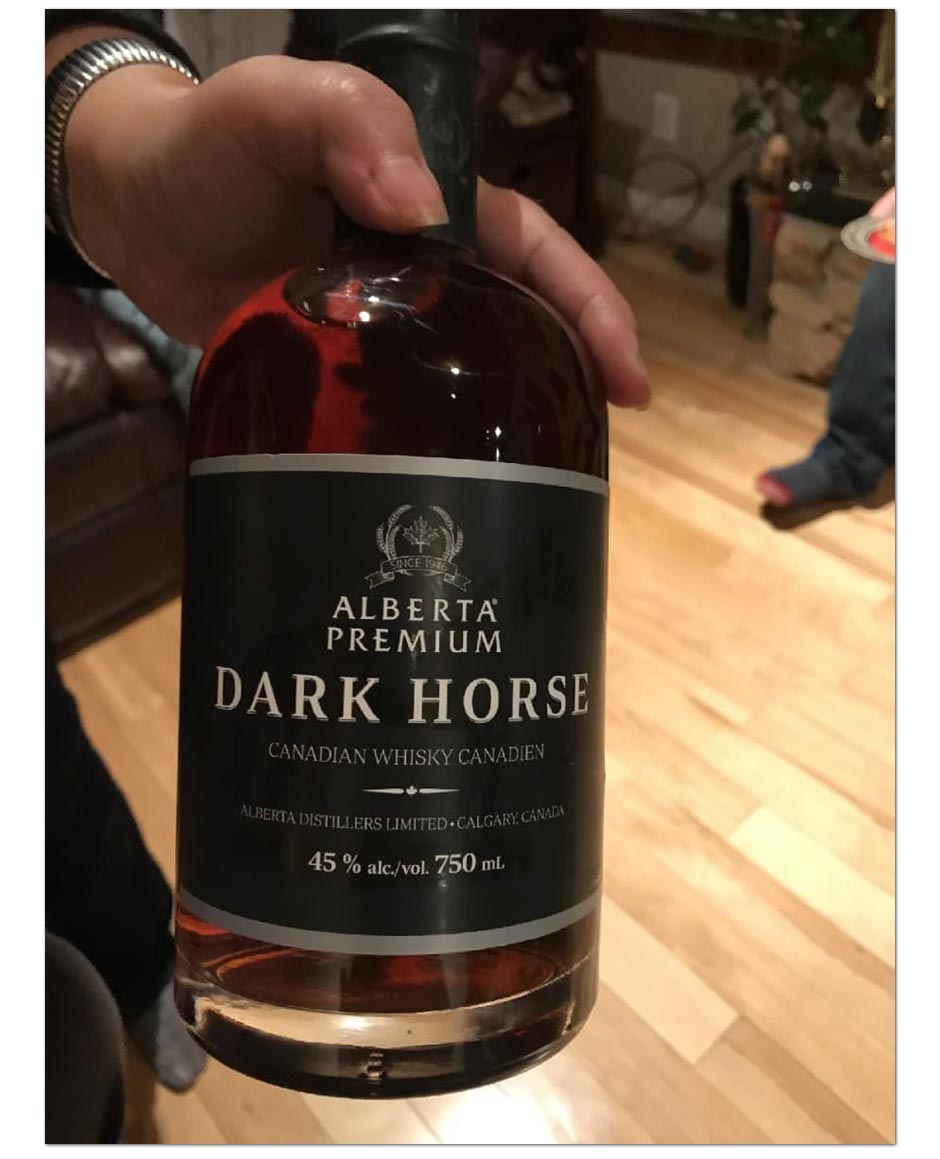 Asked if he gave the bottle of Dark Horse whisky to Callaway as a thank you gift, Kenney did not deny the report.

Instead, Kenney claimed he keeps his pick-up truck stocked with bottles of hard liquor which he distributes to guests at dinner parties.

From today’s presser. On cue, everyone fidget. Oh and Jason Kenney’s awkward attempt at being relatable. #ableg pic.twitter.com/xPD8dbfqlk