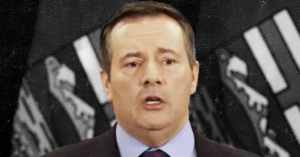 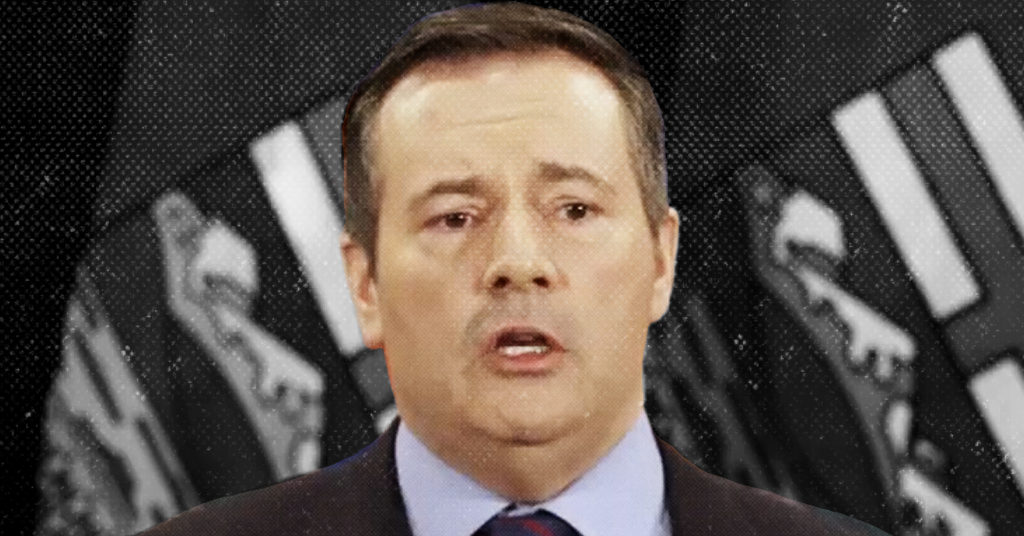 Kenney said his team had nothing to do with the ‘kamikaze’ campaign. His leadership team’s internal e-mails tell a different story.

One of the donors at the centre of an illegal donation laundering scheme worked for Jason Kenney’s leadership team when he made his suspicious donation, raising new questions about what Kenney really knew about the “kamikaze mission.”

Internal United Conservative Party e-mails obtained exclusively by PressProgress offer a never-before-seen look at the inner-workings of Kenney’s leadership campaign team – including who was involved and who really called the shots.

The e-mails show top officials in Kenney’s leadership team were in regular contact with an individual named Happy Mann through August and September 2017.

Mann is currently under investigation by Alberta’s Election Commissioner related to thousands of dollars in “irregular financial contributions” made to Jeff Callaway, the so-called “kamikaze candidate” whose short run for UCP leader began on August 10 and ended on October 4, 2017.

Mann told PressProgress he and two family members donated $9,000 to Callaway’s campaign on September 1, while as he was working for Kenney’s campaign. 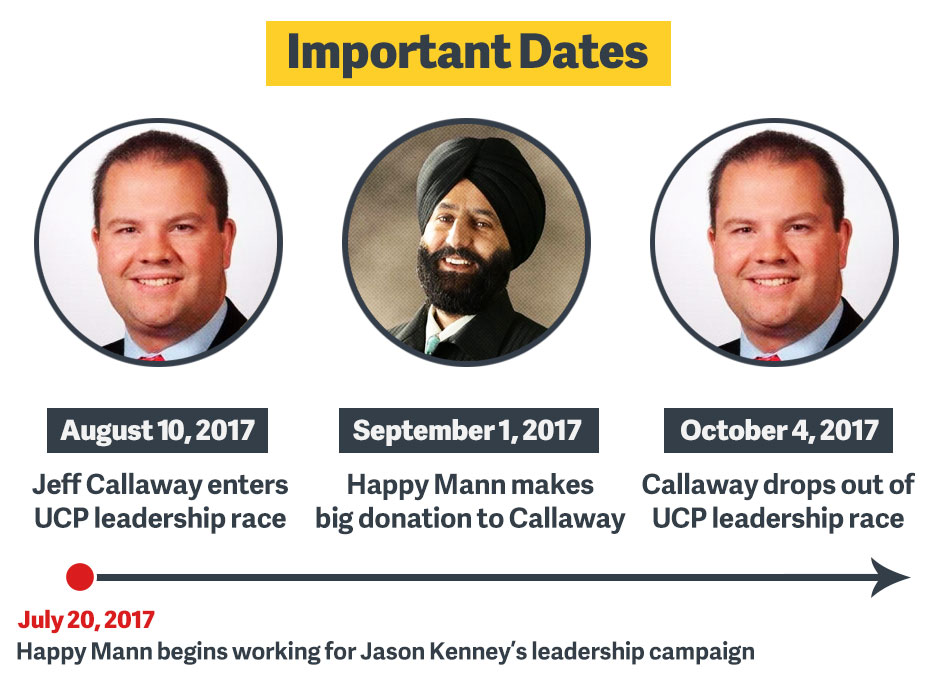 To date, several Callaway donors and campaign workers have faced penalties for serious election offences, including a campaign manager who was recently fined $15,000 for obstructing the Election Commissioner’s investigation. Mann previously told StarEdmonton he was “the middle-man” in the kamikaze donation scheme.

Last week, Mann called for an RCMP investigation, alleging Kenney and his team had full knowledge of the illegal activities.

Kenney denied his campaign had any knowledge of the scheme as recently as this week, telling reporters Monday his campaign “did not provide, directly or indirectly, funds to any other campaign.”

But the newly obtained e-mails show Happy Mann was actually regarded as an “absolutely critical member” of Kenney’s leadership team.

According to one e-mail from Kenney’s campaign manager John Weissenberger sent on July 20, 2017, Mann was welcomed into Kenney’s circle of trust about a month before Mann and two family members donated $9,000 to Callaway’s campaign.

“You will be an absolutely critical member of our effort,” Weissenberger told Mann. “I would like to include you in our regular planning meetings, if that’s agreeable to you.”

“I accept your offer and humbled to be part of Jason Kenney’s team,” Mann replied. 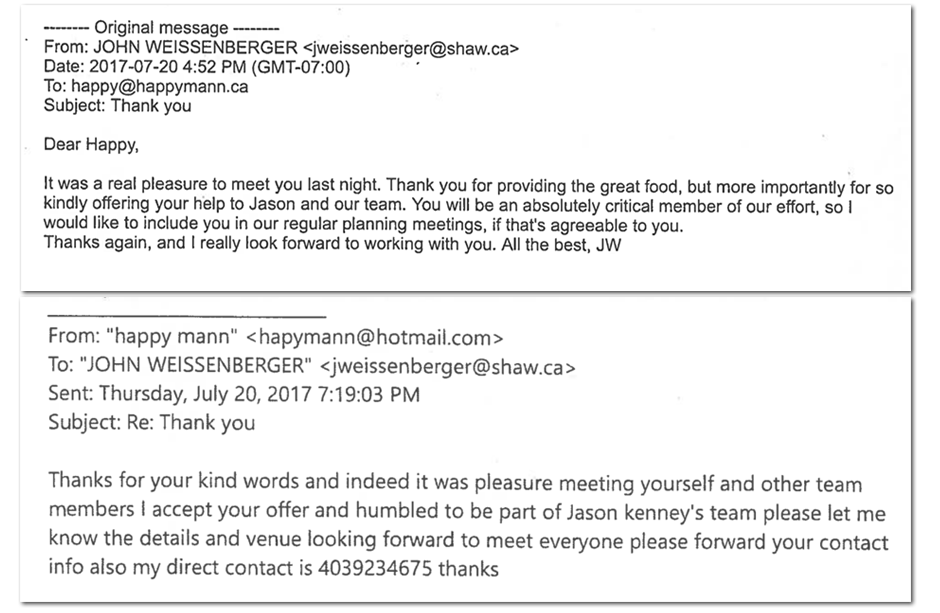 Three months ago, Mann told StarEdmonton he attended a secret meeting to plot out the “kamikaze mission” on July 19. 2017. Mann has said Kenney, Weissenberger and Callaway attended the secret meeting and that he provided the food.

Later in August, another e-mail shows Kenney’s leadership team was ordered to make sure the “kamikaze” donor was kept in the loop on internal meetings for the remainder of the leadership race.

“Please include (Mann) from now on,” Weissenberger wrote.

Kenney’s conference line has since been deactivated. 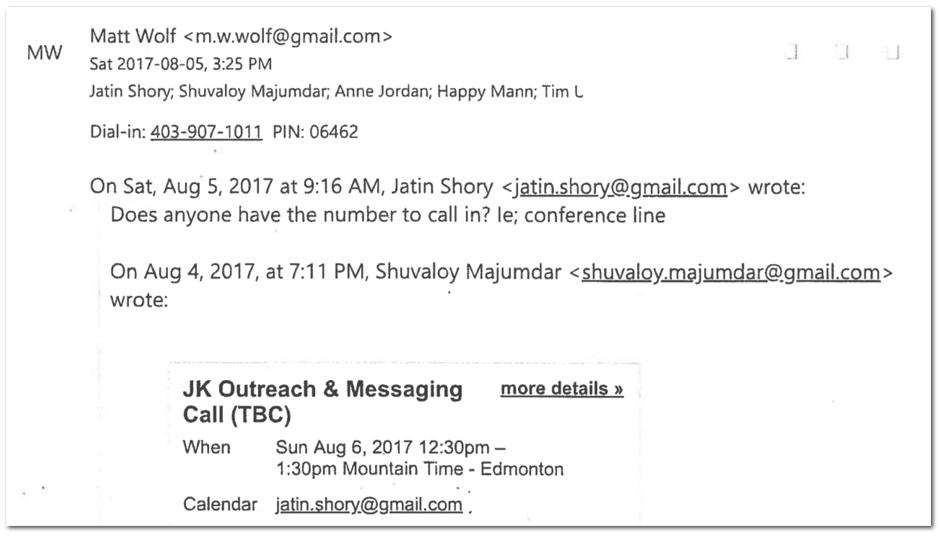 The e-mails also reveal new insights into the chain-of-command and who really called the shots inside Kenney’s leadership campaign.

According to a communications plan contained in an e-mail dated August 6, 2017, Kenney’s campaign developed special messages aimed at the Punjabi community as part of a broader “membership drive.”

The plan recommended highlighting Kenney’s experience as Harper’s former minister of citizenship and immigration, but also goes further, at one point suggesting Kenney exploit “gender-neutral changes to the education system in Alberta” in an apparent bid to sell UCP memberships. 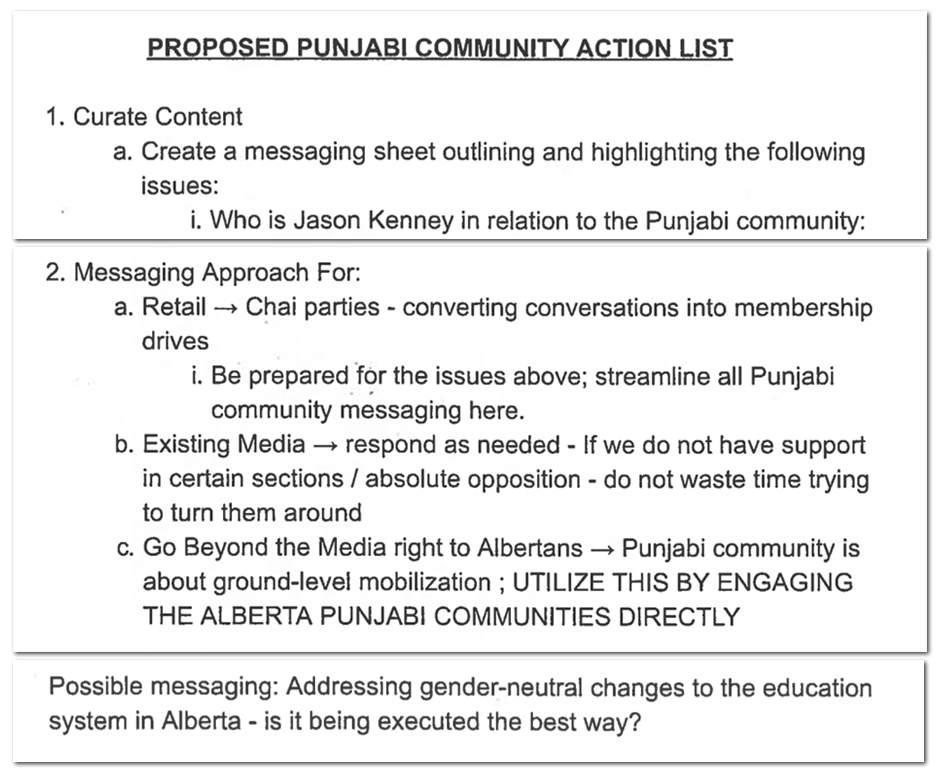 The plan shows “Happy” was asked to “create bullets” on “carbon tax issues” that would later be developed into a “script,” translated into Punjabi and then submitted for “content creation.” 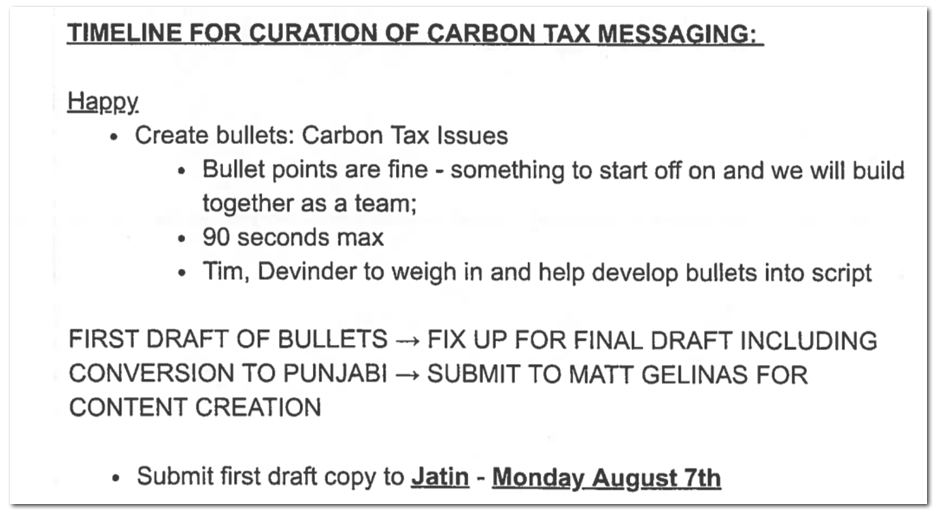 “The reason that we’re running Jeff as a serious campaign is because Jeff will be able to say things about Brian Jean that Jason Kenney cannot,” campaign worker Wendy Adam says.