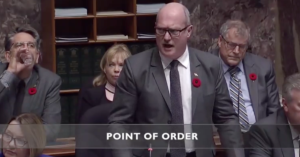 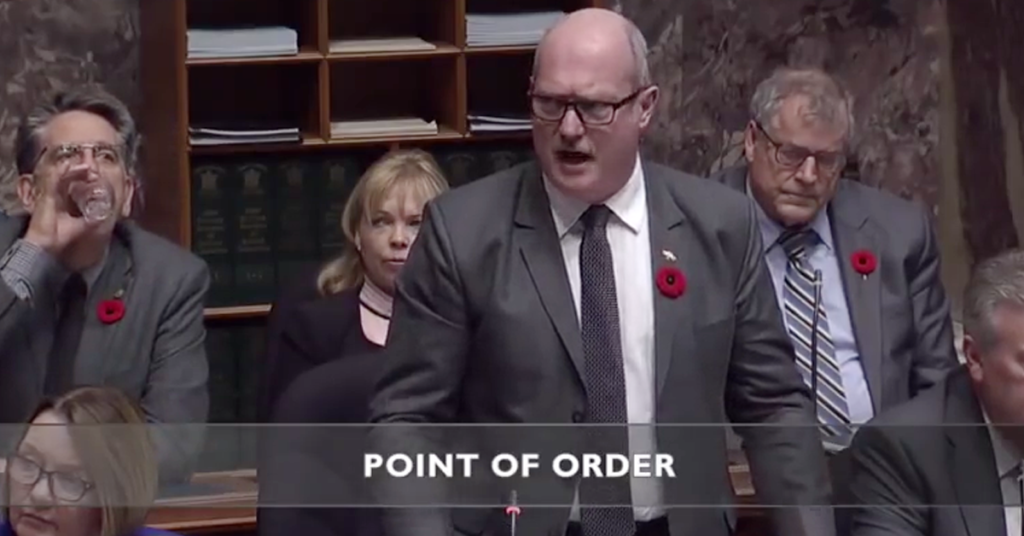 Things have been getting heated between BC Liberal House Leader Mike de Jong and Speaker Darryl Plecas lately, with de Jong suggesting Plecas is trying to muzzle his BC Liberal colleagues and the “the principle of freedom of speech” is at stake.

Plecas was elected as a BC Liberal several months ago before taking the Speaker’s job.

The BC Liberals have been repeatedly getting in trouble for addressing government ministers with insulting names, something the Speaker ruled is “unparliamentary language.”

According to de Jong, BC’s former finance minister under Christy Clark and a candidate to replace her as leader of the BC Liberal party, calling people names on the floor of the Legislature is “not unparliamentary”:

The drama goes back two weeks ago, when de Jong defended one of his BC Liberal colleagues for addressing the Minister of Agriculture as the “minister of intimidation”:

“I will say on behalf of the member…. I will repeat the assertion. The ‘minister of intimidation’ is entirely parliamentary, and they will not be withdrawn.”

At the time, the Speaker called for “temperance and moderation” and requesting the BC Liberals to please just call the minister by their real title:

“We will not accept a reference to a minister of intimidation. We have no such minister. If you could please rephrase that.”

After the Speaker urged the BC Liberals to please stop calling people names again this week, de Jong stood up on a point of order to defend their behaviour, explaining they must call people names because “we do battle with language”:

Not surprisingly, the Speaker unconvinced by that argument, ruling Tuesday that calling people names is “indeed disrespectful”:

“In reviewing the events surrounding the point of order, I conclude that the unofficial and, at times, mocking or derogatory titles when directing a question to a minister of the Crown is indeed disrespectful to the minister and reflects poorly on this institution.”

No wonder so many people want to tone down the hyper-adversarial political rhetoric by moving to a more collaborative political culture under proportional representation.