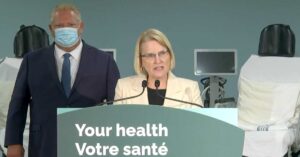 Ontario Health Minister Sylvia Jones confirms the province will allow private clinics to engage in “upselling” following Doug Ford’s announcement that his government will outsource half of Ontario’s surgeries to private, for-profit facilities.

On Monday, Ontario Premier Doug Ford announced his plan to move “50%” of surgeries out of the public system to private health facilities – 97% of which are for-profit facilities.

That move risks further creating a two-tiered system of healthcare in Ontario, as many private facilities generate revenues by charging user fees for premium services – something that would give wealthier patients better quality health care than those who can’t afford to pay.

“So you support the upselling of services at private facilities?” asked CBC News’ Katie Simpson.

“I wouldn’t call it upselling, I would call it patient options,” Jones explained.

Pointing to the specific example of cataract surgeries, Jones said patients can pay extra for an “upgraded lens as an option that patients can choose, but are not obligated to.”

Asked if this would create a “two-tiered system” that will provide different quality of health care based on ability to pay, Jones insisted: “Respectfully … No.”

“These are options that are available to the patient with the conversation with their surgeon, with their family practitioner.”

“The Ministry has no oversight mechanism to prevent patients from being misinformed and being charged inappropriately for publicly funded surgeries.”