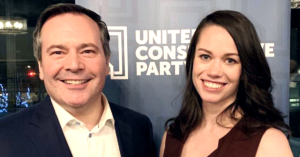 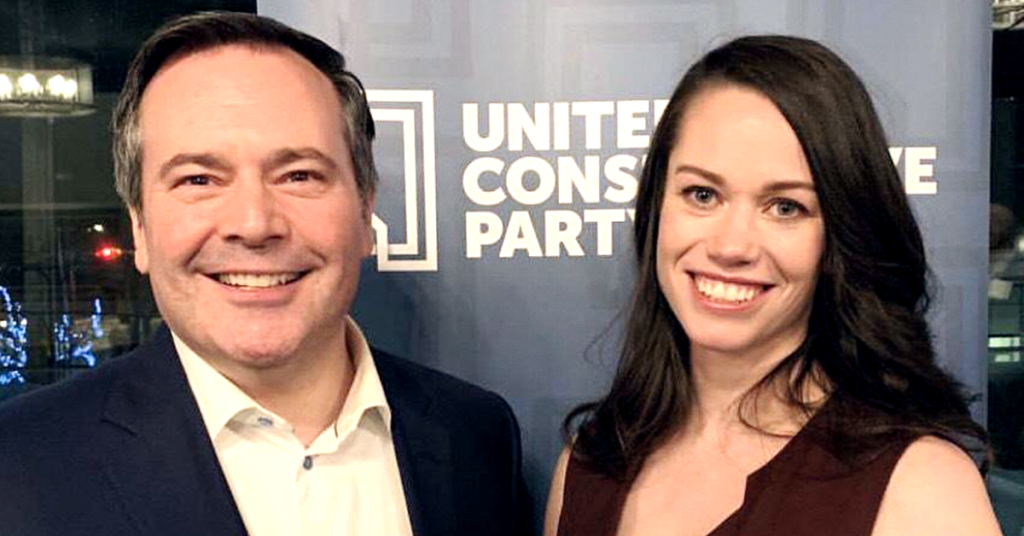 ‘I am saddened by the demographic replacement of white peoples in their homelands,’ star candidate said in leaked messages

One of the star candidates for Jason Kenney’s United Conservative Party argued white supremacist terrorists face a double-standard compared to Islamic terrorists and echoed white nationalist rhetoric in a Facebook conversation following a 2017 terror attack perpetrated by a neo-Nazi in Charlottesville, Virginia.

Caylan Ford, who is seeking to represent the riding of Calgary-Mountain View in the 2019 provincial election, also expressed anxiety over “the replacement of white peoples in their homelands” and suggested “Western culture” would collapse if “another race” takes over in Europe and North America. 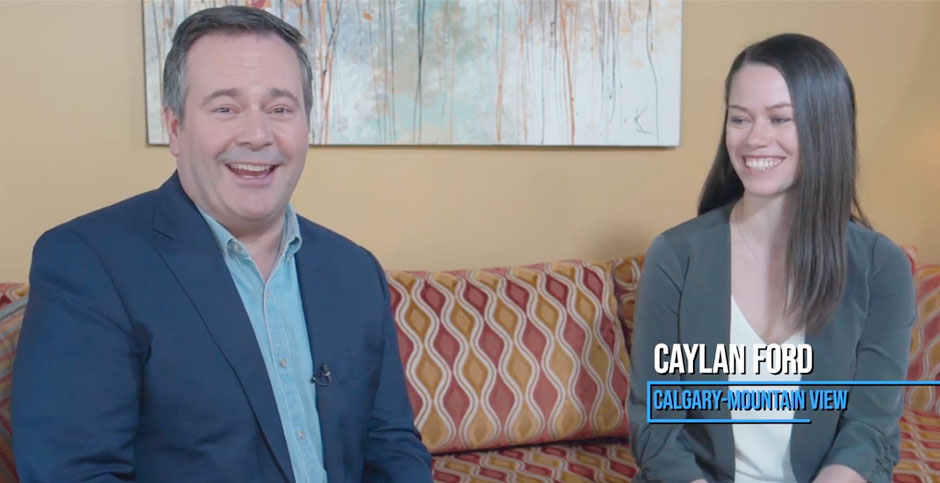 The private Facebook Messenger messages, obtained exclusively by PressProgress, were supplied by a long-time Muslim conservative with deep ties to the party who requested anonymity citing the threat of retribution.

The authenticity of the messages was verified independently and original copies of the messages were reviewed in-person. The source also provided PressProgress with a sworn affidavit attesting Caylan Ford sent them the messages and that they “have not been altered or edited in any way.”

After PressProgress supplied her with copies of the messages, Ford did not deny authoring them but instead asked “who shared these statements with you?” Ford did not respond to subsequent e-mails asking if she intended to provide a statement or offer any additional context to her statements.

On August 15, 2017, two days after a neo-Nazi drove a car into a crowd of anti-racist counter-protesters at the Charlottesville “Unite the Right” rally, the Muslim conservative says Ford attempted to engage them in a dialogue over Facebook Messenger in an attempt to find “common ground.”

The whistleblower said they chose to share the private messages because they say it shows Ford “flirting with white nationalism,” something that deeply disturbs them in the wake of last week’s deadly terror attacks on two mosques in Christchurch, New Zealand.

“After 50 Muslims were gunned down in New Zealand during peaceful prayer, does Jason Kenney really want a candidate who says white supremacists are misunderstood?”

“Kenney needs to disqualify her immediately,” they said. “These comments alone could ruin the campaign.”

Kenney, who handpicked Ford and invited her to move to Calgary from Ottawa to run as a UCP candidate, has praised her as “the personification of what I call a new generation of leadership.”

The UCP leader has invested substantial capital into promoting Ford – for months, she has been the only candidate Kenney is running sponsored ads for on his personal Facebook page. 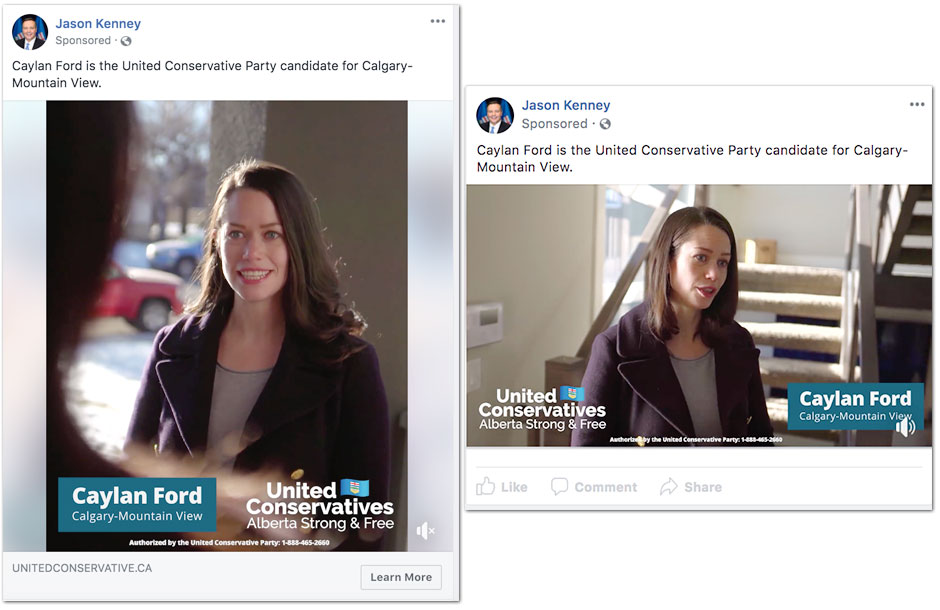 While political leaders in Canada and around the world have denounced racism and anti-Muslim bigotry, Ford’s social media has so far remained silent on the subject – although the Facebook Messenger messages may shed some light on her thinking.

In one exchange about the Charlottesville terror attack, the UCP candidate argued white supremacist terrorists face a double-standard compared to other terrorists.

“When the perpetrator is an Islamist, the denunciations are intermingled with breathless assurances that they do not represent Islam, that Islam is a religion of peace, etc.” Ford wrote.

“When the terrorists are white supremacists, that kind of soul-searching or attempts to understand the sources of their radicalization or their perverse moral reasoning is beyond the pale.”

Ford complained that “anyone who shares even some of their views” gets “painted with the same brush.” 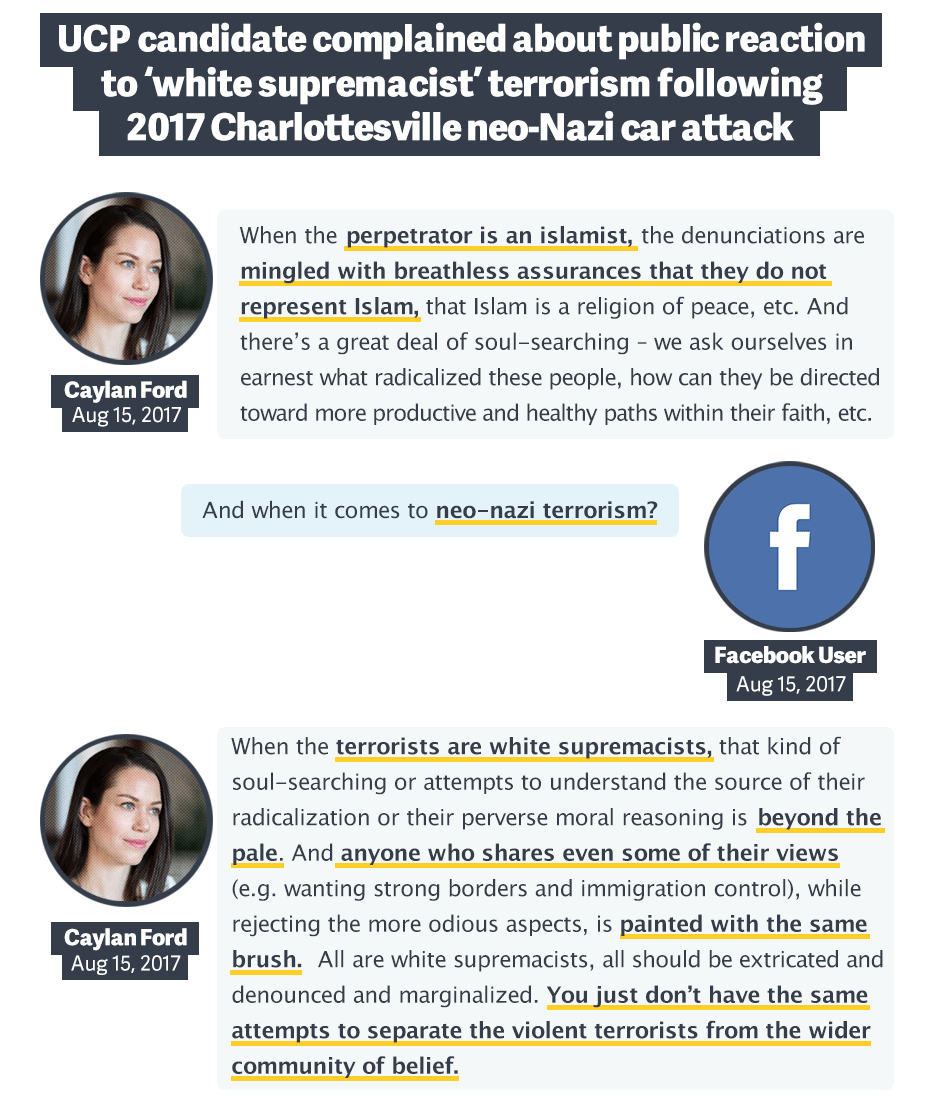 Although Ford offered “strong borders and immigration control” as a few examples of  “views” a respectable, high-brow conservative might share with a white supremacist terrorist, she went on to share a few others.

“I am somehow saddened by the demographic replacement of white peoples in their homelands,” Ford wrote, echoing a narrative common with white nationalists.

She added: “it’s clear that it will not be a peaceful transition.”

The “great replacement” is a common cry of French far-right leader Marine LePen’s Front National, which borrowed the term from a conspiracy theory popularized by French author Renaud Camus which falsely claims a shadowy cabal of global elites are deliberately replacing white Europeans with Muslim immigrants.

The far-right terrorist in New Zealand last week left a manifesto that was also titled “the great replacement,” echoing many of the same themes.

That’s not the only thing Ford says makes her feel “sad.”

Later in the conversation, Ford declared “I think it is unlikely that Western culture will survive without Western peoples” if “another race” becomes dominant.

“Why would another race want to cast away their own culture to adopt someone  else’s,” Ford wrote.

Another nomination candidate, Lance Coulter, was disqualified after three UCP candidates were photographed partying with members of the Soldiers of Odin, a far-right hate group.

“A polite racist is still a racist,” UCP executive director Janice Harrington stated in a letter to Coulter at the time explaining the reasoning for his disqualification.

The UCP also banned Adam Strashok, an anti-Semitic, white nationalist who ran the call centre for Kenney’s leadership campaign, leading the UCP leader to promise he would create a special online database to track racist extremists inside his party.

Muslim communities in Alberta faced several hate-motivated incidents last year, notably including an arson attack at a mosque in Edson and members of the Soldiers of Odin harassing worshippers at an Edmonton-area mosque.

Most recently, hate mail emblazoned with a UCP logo was sent to another Edmonton-area mosque.

Update (March 19): Following publication of this story, Caylan Ford announced her resignation as a UCP candidate.