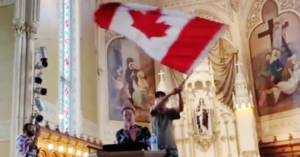 Several months after the end of the convoy occupation of Ottawa, a number of far-right convoy-linked groups are increasingly looking more and more like Christian Evangelical “revival” movements.

“This group is small, but it’s there. And they should not be dismissed as being merely religious,” theology professor Dr. Christine Mitchell wrote in The Conversation back in February.

Mitchell suggests that Christian nationalist truckers’ “divinely-mandated mission is the overthrow of the Canadian government,” and that they likely believe “Parliament is the temple that will be destroyed unless people turn from their sin.”

In Ottawa, a convoy-adjacent group calling itself “The United People of Canada,” took over a deconsecrated church last month.

TUPOC has said it wants to run the church as a “social enterprise” and transform it into a community centre, although the group was recently served an eviction notice for failing to pay their $10,000 lease.

They say the bailiff who posted the eviction notice on the church is under investigation by police. They’re not leaving. They say eviction notice is “unlawful” #ottnews #ottawa pic.twitter.com/BvoWUC1WVz

While TUPOC doesn’t explicitly describe itself in religious terms, key individuals at TUPOC have cited religious convictions as motivation for occupying the church.

“There is kind of a war going on. It feels like a war doesn’t it?” Diane Nolan, a TUPOC board director, said in a Facebook video last week. “It’s not just a convoy, it’s an uprising.”

“I’m gonna die in this place knowing that I’ve served God first,” Nolan said in another video that has since been deleted.

Diane director from Tupoc performing lord knows what on her followers. Earlier in the day after her singing performance the woman seen crying referred to Diane as her spiritual guide.

To say this isn’t about religion is a load of bull.#tupocisacult #cdnpoli pic.twitter.com/XvYCVNJKUu

Nolan’s religious beliefs are intertwined with far-right politics, urging supporters not to vote Liberal or NDP.

“‘I’ve had so many dreams and visions. If this next election, if anybody is voting red or orange, we’re in trouble. If they come into power, I’m telling you…that red and orange, we need to be very careful. If we see them get in power then you better get back into position and you better know how to stand,” Nolan said in a Facebook video.

I wasn’t expecting a dance party when I was watching the stream today.
Guy in the background couldn’t contain his patriotism after seeing the man waving the CDN flag and had to find a flag of his own to wear.

Why are they so desperate for the spotlight?#TupocIsACult #cndpoli pic.twitter.com/bk7FOTb97m

TUPOC is one of many groups across the country who are incorporating the rhetoric of the ‘freedom’ convoy into Evangelical theology and preaching.

In Saskatchewan, convoy participants and organizers recently spoke at the three day Faith Fire Freedom Festival in Moose Jaw organized by the Christian nationalist group Revival Reformation Alliance on August 11-14. The festival took place in a large outdoor “revival” tent and featured worship services, street preaching, river baptisms, speaking in “tongues” and even a woman who danced on stage claiming God had healed her from a knee injury.

The Revival Reformation Alliance describes itself as “a coalition of ministries, ministers, intercessors and saints contending for the move of God in this nation.” The RRA has previously been criticized for promoting homophobic and anti-abortion messaging through their “Battle for Canada” events hosted in cities across the country.

RRA and Battle for Canada are associated with the New Apostolic Reformation movement. Art Lucier, an RRA preacher who spoke at the Faith Fire Freedom Festival, recently denied that the NAR is a “cult.”

“We’ve been accused that we are part of a cult called NAR, the New Apostolic Reformation. Now this is one of the stupidest things I’ve ever heard,” Lucier said in a Facebook video.

According to Lucier, the New Apostolic Reformation advocates for the resurgence of apostles and prophets to function as non-denominational “movement leaders” to “tear down demonic strongholds and plant and establish the Kingdom of God on earth.” Lucier says these movements should involve not only prophets, teachers, pastors and prayer leaders but “concerned Christian business people” and politicians.

However, other Christian leaders have called NAR “a cancer within Christianity” and “a formula for mass manipulation, the creation of cult leaders, and people who are absolutely unaccountable.”

Convoy organizer and former PPC candidate Mark Friesen was listed as a speaker at the RRA’s Faith Fire Freedom Festival. Friesen was involved in the far-right Yellow Vest movement and United We Roll convoy before organizing “Freedom Rallies” in Saskatoon at the start of the COVID-19 pandemic. 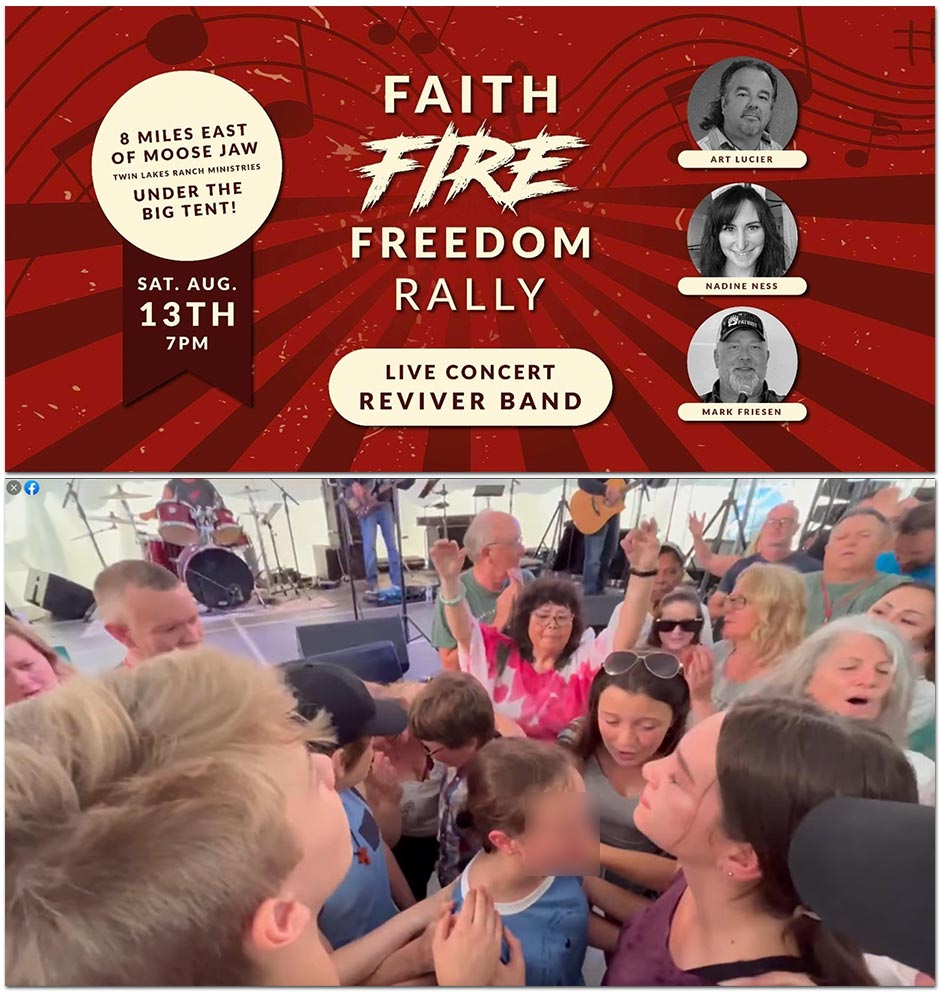 Friesen later caught COVID-19 and was hospitalized for months and transferred to Ontario. After being released from the hospital, Friesen credited the “power of prayer” for saving him, noting in a livestream he had previously rejected religion.

“We’re ready to see a big move across Saskatchewan and I think it’s gonna start here, this awakening, this revival of some sort,” said Ness in a private Facebook video.

Ness founded Unified Grassroots to oppose all COVID-19 restrictions and mandates in 2021, saying she felt “called” by God and that the group was led by “Christian values.” Other prominent Unified Grassroots members have promoted religious conspiracy theories linking the COVID-19 vaccine to the Antichrist and the Mark of the Beast.

Last year, Ness had an hour-long phone call with Saskatchewan premier Scott Moe pressuring him to drop all COVID-19 restrictions. Ness has since started her own provincial party.

Unified Grassroots premiered a documentary at the “We Are Free” concert called Fringe Preachers which highlighted the many preachers who travelled to Ottawa during the convoy occupations. The documentary was produced by Toronto-based street preacher Solomon Ikhuiwu. Ikhuiwu claims to have predicted the Ottawa convoy by burying — or “planting” — a Bible in Ottawa on Canada Day 2021, over six months prior to the convoy occupation in January 2022.

The documentary also included a clip from The Fifth Estate where top convoy organizer James Bauder said that God had called on him to start the convoy:

“God, where do I fit into this? How do I put unity out there? And he said ‘Convoy for Freedoms.’”

“God has given us the opportunity to be able to take part in something like this, to stand for what we stand for – peacefully, not aggressively – and we’re making a huge impact,” King said in the documentary. “As you hear the train horns on the trucks right now, that’s the horns of heaven telling you, ‘You’re on the right path, Pat’.”

King had suggested in other videos the only way the convoy to Ottawa would be “solved is with bullets.”

The documentary did not include members of a separate network of preachers that participated in convoy occupations in Ottawa and blocked US-Canada borders, Liberty Coalition Canada.

Corrections: This article has been updated to correct details contained in a list of pastors featured in the documentary ‘Fringe Preachers’. An earlier version of this article mistakenly listed one individual with a name similar to Reverend Michael Coren, who had no involvement in the documentary and has been an outspoken critic of convoy groups.