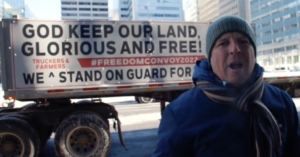 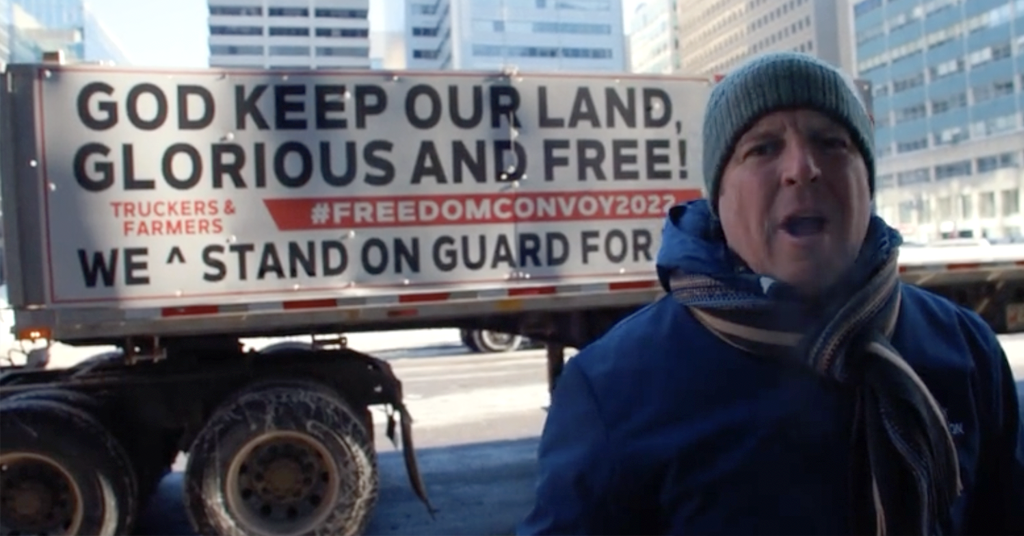 A nation-wide network of right wing Christian Evangelical pastors have been participating in the convoy occupation of Ottawa and border blockades in Alberta, Manitoba and Ontario.

The pastors, many of whom were previously fined for holding church services in contravention of public health orders, are part of a group called Liberty Coalition Canada.

The LCC was founded in January 2021 to oppose COVID-19 restrictions on churches but has since launched campaigns to oppose vaccine mandates and capacity limits in workplaces, schools and universities.

On February 16, the LCC wrote an open letter to Prime Minister Justin Trudeau condemning his use of the Emergency Powers Act in response to the far right convoy’s three week occupation of Ottawa, telling Trudeau they are “concerned” he does “not appreciate the significance of God’s wrath upon a rebellious and lawless nation.”

“We implore you to step back from the brink, restore the constitutional freedoms of the people, respect the God-given rights of our citizenry and above all to humble yourself and take a knee before Christ the King lest you perish in the way.”

The letter is signed by 29 pastors across Canada.

Three of those pastors have participated in the convoy that has occupied Ottawa as well as blockades at the Canada-US border.

LCC co-founder and president Michael Thiessen, a pastor at Grace Baptist Church in Alliston, Ontario, first participated in the initial convoy to Ottawa on January 27 and was spotted in Ottawa on the eve of a major police operation on February 17. 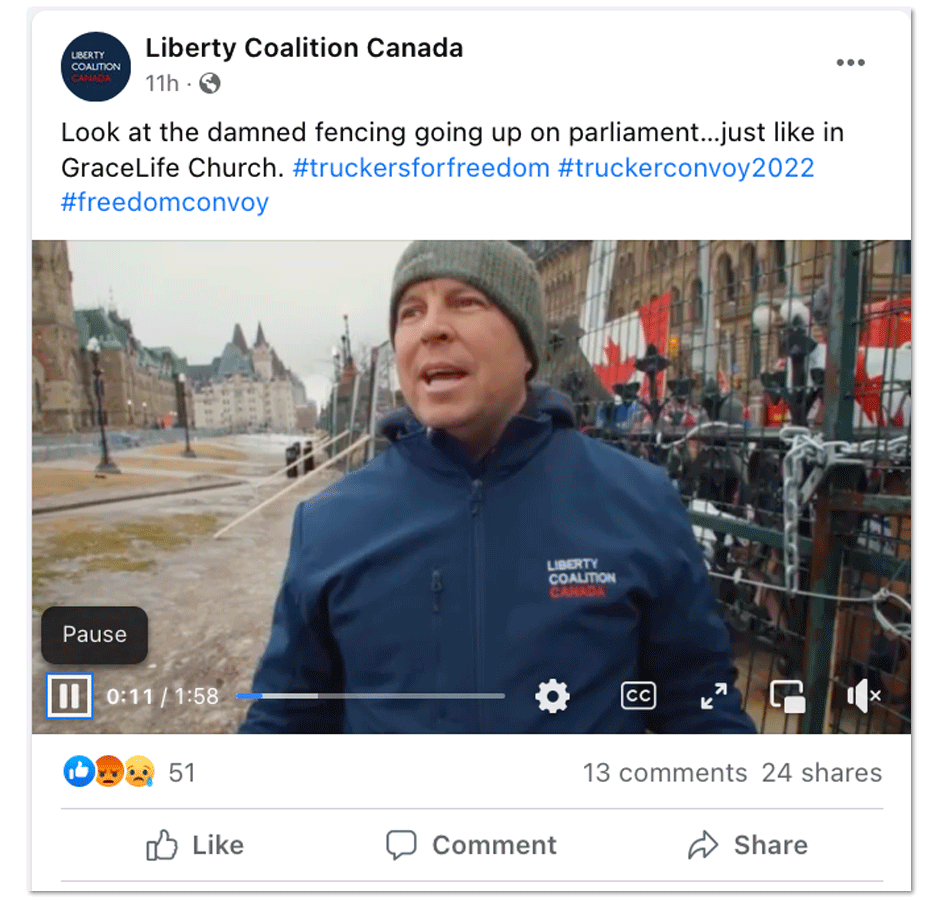 In an episode of his Liberty Dispatch podcast entitled “Live Analysis from Inside the Truckers Convoy,” Thiessen suggested “clogging” Toronto after Ottawa as punishment because the city fails to share his right-wing political views.

“Why don’t we clog up Toronto, too?” Thiessen said, adding that Ontario is “held captive” by “Torontonians who continually vote Liberal and NDP.”

Yesterday, Thiessen posted a Twitter video in his car where he said he was returning to Ottawa, referencing a video made by convoy leader Pat King calling for support and discussing police logistics.

Tim Stephens, pastor at Calgary’s Fairview Baptist Church, also signed the LCC’s letter to Trudeau. Stephens has been a prominent figure in the Canada-US border blockade in Coutts, Alberta, according to a security report obtained by Global News.

The Global Enterprise Security Risk Management report found Stephens was a “galvanizing” presence in Coutts and that the blockade became increasingly “spiritually motivated by far-right Christian ideology” instead of simply opposing COVID-19 restrictions, although there is no evidence Stephens is involved in blockade planning and operations.

The report adds the Coutts blockade has become more concerned with “replacing our current democratic system of government with a government that is based upon the principles of the Christian right.”

“The rule of law would be replaced with the word of God, as interpreted through right-libertarian ideologies, specifically: civil liberties, natural law, and a major reversal of the modern welfare state,” the report explains.

Global News also reviewed a video of Stephens preaching in Coutts where he referred to the state as a “beast” and called for blockade members to not rely on the government for welfare, jobs or education.

The threat assessment, obtained exclusively by Global News, found the Coutts blockade was spiritually motivated by far-right Christian ideology and was highly organized.

“We have all forgotten, as a country, that freedoms are founded upon the supremacy of God, and the rule of law. And not just the rule of any law, but the rule of the law — the word of God,” Stephens says in the video.

The report also indicates the blockade has connections to libertarian groups in the US and notes the presence of American supporters in Coutts.

In early 2021, Stephens was fined and jailed for contravening COVID-19 public health orders at Fairview Baptist Church. Stephens and his brother Trevor, who is also a pastor at Victory Baptist Church in Sherwood Park, began the Open Alberta Churches campaign which encouraged Christians to sign Liberty Coalition Canada’s statement “The Church Must Gather.”

The LCC statement was signed by 3,300 individuals and the leaders of 200 churches across Canada and the United States, including: Texas, California, Florida, Washington, Missouri, New York, Indiana, Georgia, Oregon, Pennsylvania, Idaho, Alabama, Nevada, Michigan and North and South Carolina.

Trevor Stephens also noted in a blog interview he reached out to US politicians as part of this campaign “calling on them to speak against this persecution” and received responses from Republicans Missouri Senator Scott Hawley and former Wisconsin governor Scott Walker.

Stephens was represented by James S.M. Kitchen through the Justice Centre for Constitutional Freedoms, as were many other LCC church leaders facing fines. Kitchen then left the JCCF to start his own firm and joined the LCC as its Chief Litigator in 2021. The LCC’s current fundraising goal for its legal defense fund is $700,000. Kitchen stated in a video, however, that he will still consult with the JCCF and promote certain legal cases through LCC networks. The JCCF currently represents several key Freedom Convoy organizers.

Pastor Aaron Rock of Harvest Bible Church in Windsor, Ontario also signed the LCC’s letter to Trudeau. Rock was also represented by the JCCF after receiving fines for holding church services that contravened public health orders in 2020. Harvest Bible Church also states it is a “partner” with LCC on its website.

Rock spent three days in Ottawa during the convoy occupation and frequented the US-Canada border blockade at Windsor’s Ambassador Bridge.

Tobias Thiessen, pastor at the Church of God Restoration in Steinbach, Manitoba, signed the LCC’s “The Church Must Gather” statement in 2021. Thiessen’s church was also represented by JCCF after it received fines for holding services contravening public health orders. Theissen also participated in the US-Canada border blockade at Emerson, Manitoba.