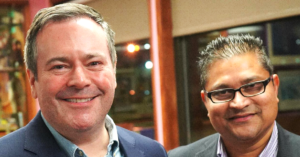 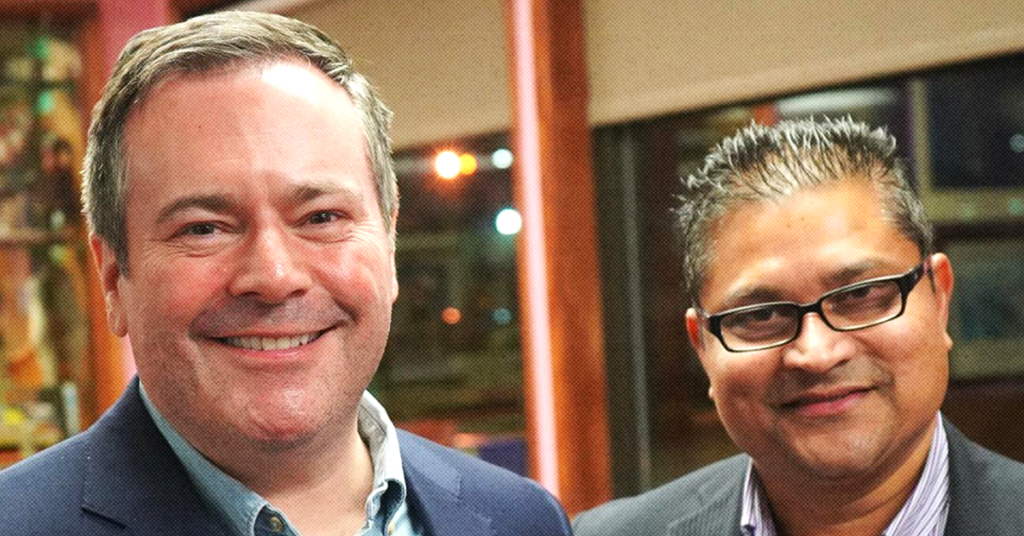 Investigators with the Royal Canadian Mounted Police visited several customers of a business owned by a United Conservative Party MLA in early April, asking them if they’re UCP members and whether they voted for Jason Kenney.

Peter Singh was elected as the UCP MLA for Calgary-East on April 16, even though the Mounties executed a search warrant on his auto repair shop a few days earlier, seizing a computer and a hard drive during the late night police raid.

The RCMP have said they are not able to release details about why they executed a search on the UCP MLA’s business, noting “the warrant is sealed.”

Several of Singh’s customers whose names appear on an official UCP membership list obtained exclusively by PressProgress confirm they were visited at their homes by a pair of RCMP investigators — one of whom was a Punjabi-speaking officer — only weeks before the police raid.

The customers, most of whom live in southeast Calgary, said plainclothes officers knocked on their doors and asked about their visits to Singh’s auto repair shop and asked if they’re UCP members.

The RCMP explicitly asked Singh’s customers if they cast votes for Jason Kenney. 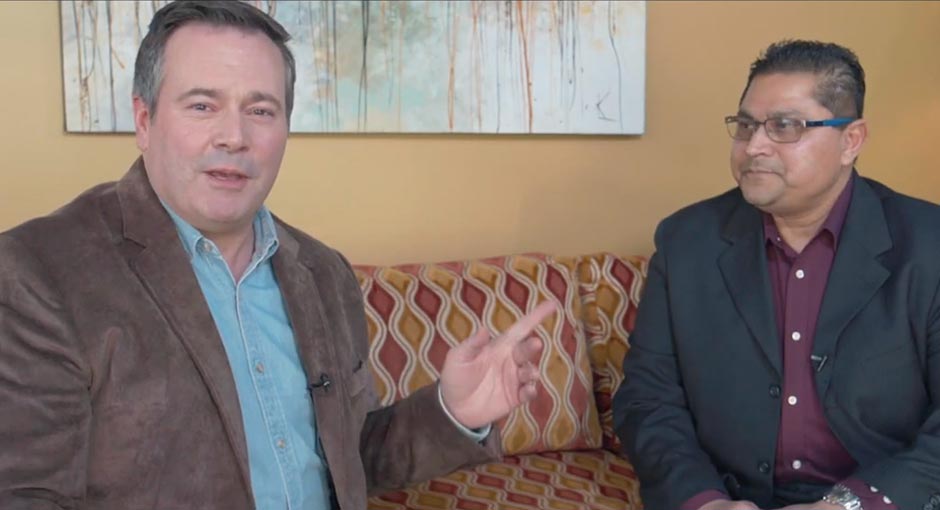 In February, PressProgress was first to report on a bombshell letter penned by a former UCP MLA detailing allegations of a massive “identity fraud” scheme.

The letter alleges Kenney’s leadership team added thousands of “fraudulent e-mail addresses” to the names of real people who were unaware they were being signed up as UCP members. These e-mails were allegedly used to cast fake leadership votes.

In April, PressProgress was first to report the RCMP are investigating allegations of election fraud in the 2017 UCP leadership vote, asking questions about fake party memberships and senior members of Kenney’s leadership team.

Customers of UCP MLA Peter Singh’s Auto Pro Shop in Calgary said the RCMP are also asking them who they voted for in the 2017 UCP leadership race.

“They came a couple of times to my place, the RCMP,” Khadim Hussain, a customer of Singh’s auto shop, told PressProgress.

Hussain answered a call placed to a number that appears on the UCP membership list under the name of Naeem Khan. Hussain said Khan, whom he described as his “best friend,” had also been questioned “twice” by the RCMP.

“They asked him if you voted for Jason Kenney or not, and this and that.”

Likewise, Jerome Osuji said two RCMP officers, a male and a female, pulled up to his home in an unmarked sedan and questioned him about Singh’s auto shop and the UCP leadership vote.

They showed up at my house some time “around April,” Osuji recalled, “about two weeks before the election.”

“They visited me asking about Peter Singh,” he said. “They asked me who I voted for in the UCP leadership race.” 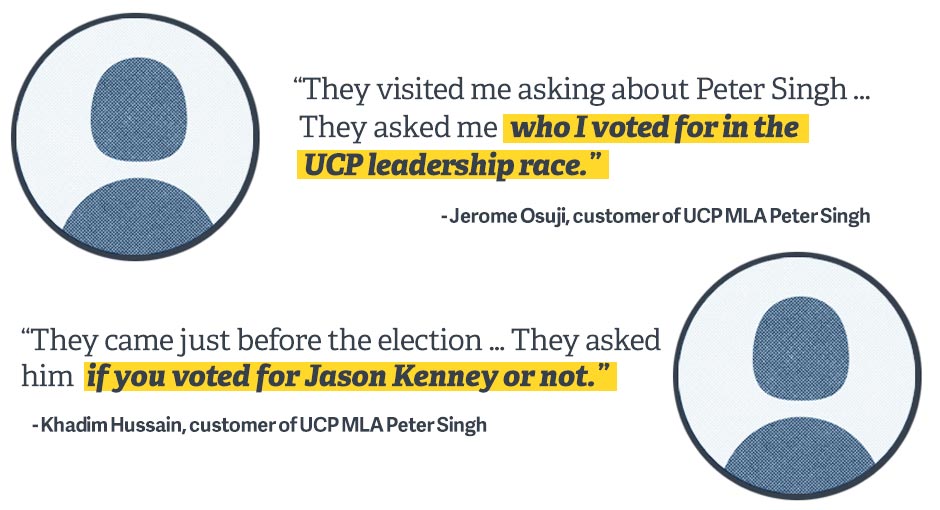 Kon Nai, another one of Singh’s customers, also confirmed he was contacted a “couple of times” by RCMP investigators.

“I told them I’m in Vancouver so it doesn’t matter, I can’t vote anyway,” Nai said. “I’m not in Alberta anymore, I’m in BC.”

On the UCP membership list obtained by PressProgress, Nai’s name is registered under the same e-mail address that appears on the website of Singh’s business: “autoprostop@hotmail.ca.”

That email is shared with two other individuals on the UCP membership list while another two are registered at “autoprostop@yahoo.com.”

Others, who say they have not been visited by the RCMP, told PressProgress they were signed up for UCP memberships without their knowledge after getting work done on their cars.

“I went in there and got some repairs done,” said one customer, who spoke to  PressProgress on condition her name not be published.

According to the customer, Singh asked if she was “interested in receiving e-mails from the UCP,” then collected her name and e-mail address.

“Several days later, I got an e-mail confirming from the UCP party that I want to pay for a membership and they have my credit card number.”

She told PressProgress that when she called the UCP to complain, they “confirmed right away that he’s not supposed to be soliciting through his company at all.”

“He did charge my credit card,” she said. “But the next morning it was credited back.”

“When I looked at my statement that day on the computer, it had the service that I had done from him and then it had a $10 charge and then I had a $10 credit,” adding that “it was just automatic, I didn’t even know it had been done.”

“It was fraud,” the customer said. “He was using my card where he shouldn’t have, because I only paid for the services that were done on my vehicle.”

“While I was sitting there at the shop, he solicited probably six or seven other people the same asking if they would be willing to receive emails,” she said, adding that “nearly all of them said ‘yes’.”

The customer’s husband later refused to let PressProgress pose follow-up questions to his wife, explaining the UCP told them the party had looked into their complaint but “didn’t find any evidence of wrongdoing.”

Informed of an RCMP investigation, the husband suggested his wife was “mistaken” and insisted “it was actually, in fact, Peter Singh’s Mastercard.”

Under party rules, UCP members must sign a statement “personally authorizing” their application to join the UCP. Membership fees can only be for by applicants or an immediate family member.

Douglas Bodhaine, another customer of Singh’s shop, also told PressProgress he was signed up by one of Singh’s employees.

“I never signed up to my knowledge,” Bodhaine insisted. “It all happened after I went to that Auto Pro Stop.”

“I was just there to buy four tires.”

“Then, one day, sometime after that, I was receiving phone calls non stop,” Bodhaine said. “I’ve never voted in my life for anything.”

That echoes the experience of Mary Jane Yala Supnet, who told PressProgress she inexplicably began receiving UCP e-mails shortly after bringing her car into Singh’s auto shop, even though she never signed up and doesn’t recall paying any fees.

“I think it was Peter Singh,” Supnet said. “He’s the only person I know of that would do it. I don’t remember paying anything or signing up.”

Singh did not respond to a request for comment from PressProgress in response to the information shared by the UCP MLA’s customers.

The UCP MLA’s lawyer has confirmed the RCMP are investigating “alleged voter misconduct during the leadership campaign of Jason Kenney,” but maintains his client has “done nothing wrong.”

In a letter addressed to UCP leader Jason Kenney on November 30, all four of Singh’s UCP nomination rivals called for an investigation into his nomination campaign, alleging Singh misused his business to sign-up members, supplying sworn affidavits from a number of party members.

“We also sent all documented accounts of Mr. Singh using the personal information of his customers gathered through his private business to fraudulently sign these individuals up for UCP memberships, forging their identity and consent in the process,” the letter states.

In January, Singh was cleared by an internal UCP probe.

“The allegations made regarding the nomination event in Calgary-East deserved a thorough and judicious inquiry,” UCP spokesperson Matt Solberg said at the time.

He added that the UCP was “confident” its internal investigation “met this standard.”

Despite the internal probe or the fact he acknowledged the allegations in December, Kenney told reporters on April 15: “I’m not aware of an accusation against Mr. Singh.”