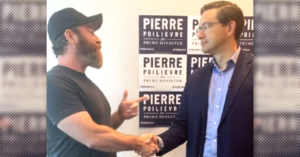 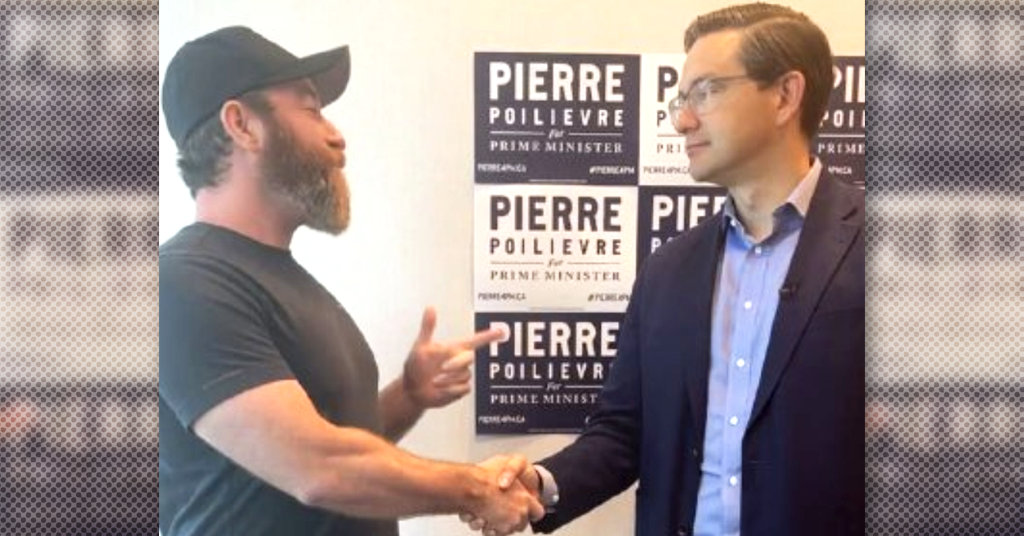 Pierre Poilievre is ignoring calls to clearly disavow a man identified by a federal counterterrorism organization as a national security threat after Poilievre shook hands with the far-right extremist at a meet-and-greet in Nova Scotia.

During a campaign event in Dartmouth on Saturday, the Conservative leadership candidate was photographed alongside Jeremy Mackenzie, a far-right influencer previously arrested for harassing Nova Scotia’s chief medical officer of health.

Mackenzie broadcasted the photo to his followers on one of his social media accounts, alleging Poilievre personally assured him during the meeting that he would be “pulling the plug” on media subsidies if he becomes prime minister.

Jeremy Mackenzie, founder of Diagolon, just posted a picture to his Telegram of him shaking hands with Pierre Poilievre.

It’s unclear when the photo is from, but it looks like it’s from one of Poilievre’s campaign meet and greets. pic.twitter.com/scAauQyhfG

Mackenzie is widely identified as the leader of the “Diagolon,” a far-right militia-style accelerationist group that was linked to a plot to murder RCMP officers during last winter’s convoy blockade at Coutts, Alberta.

Broadly speaking, accelerationists seek to destabilize society in order to bring about its collapse.

An intelligence report produced by the Integrated Terrorism Assessment Centre recently obtained by PressProgress explicitly names Mackenzie as one of the “key individuals” associated with “ideologically motivated violent extremist” groups who were present during the Ottawa convoy occupation.

“Violent extremists who support or are attending the protests include a range of IMVE adherents including white nationalists, accelerationists, separatists, radical libertarians, conspiracy theorists and others who justify violence to achieve ideological objectives,” the report states.

“We assess the presence of key anti-government IMVE adherents, such as … Canadian accelerationist influencer Jeremy Mackenzie and others, is indicative of a much larger attendance at convoy protests by IMVE adherents over recent weeks.”

The photo sparked immediate calls for Poilievre to disavow Mackenzie and his supporters.

“It’s long past time for Pierre Poilievre to loudly and clearly tell Mackenzie, Diagolon and their supporters they are not welcome,” tweeted Poilievre’s Conservative leadership rival Jean Charest. “Some votes should not be courted.”

Hate and intolerance have no place in Canada or in the Conservative Party. Share if you agree that it’s long past time for @PierrePoilievre to loudly and clearly tell Mackenzie, Diagolon and their supporters they are not welcome. Some votes should not be courted. #cdnpoli #cpcldr https://t.co/yQ6xeuWAwO

After being provided with details from the counterterrorism report, Poilievre’s leadership campaign did not directly respond to questions from PressProgress about whether it would clearly disavow the far-right influencer and the extremist groups he is associated with.

Instead, Poilievre’s campaign provided a generic statement shared with other media outlets that does not mention Mackenzie or disavow his support, but instead stressed Poilievre has no responsibility over who attends his events.

“My campaign events are public. There is no registration and anyone can walk in,” Poilievre’s campaign statement reads. “I have shaken hands with literally thousands of people at public rallies.”

“It is impossible to do a background check on every single person who attends my events.”

“As always, I denounce racism and anyone who spreads it,” Poilievre’s leadership campaign’s statement adds, before underlining that Poilievre did not “know or recognize this particular individual.”

In Dartmouth NS today, a person federal security agencies say is a “key individual” associated with “ideologically motivated violent extremist” groups went to a @PierrePoilievre event and was photographed with the #CPCLdr candidate. Statement from Poilievre to @globalnews : pic.twitter.com/EE02wrbKfP

According to the Integrated Terrorism Assessment Centre, violent extremist groups, including accelerationists, were flagged as potential threats to elected officials and government buildings during the Ottawa convoy occupation.