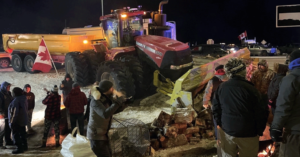 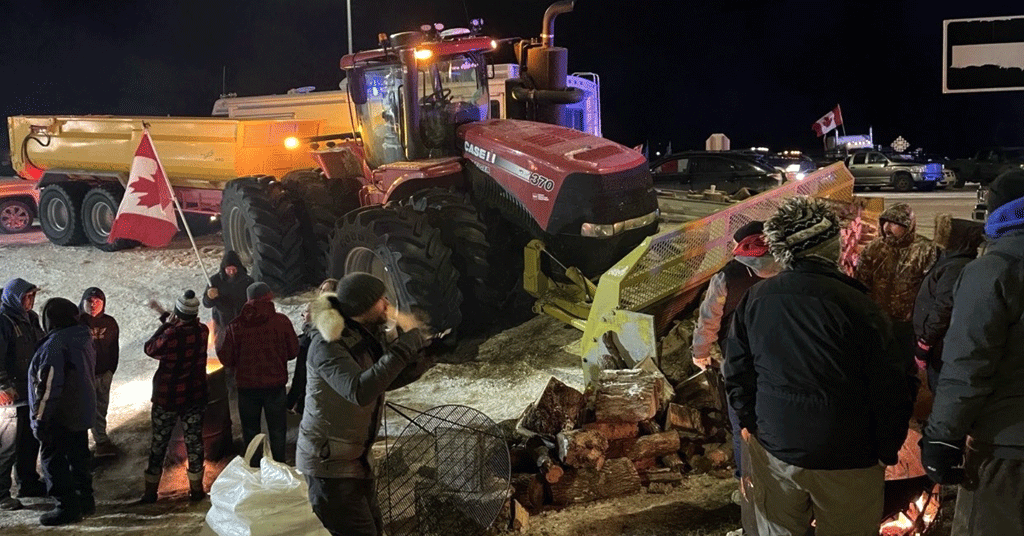 No traffic is flowing south to the border as a Coutts border blockade enters its fifth day, leaving the residents of the Alberta village “afraid.”

The blockade at Coutts, a town of 250 mostly senior citizens, expanded further north Thursday at Milk River, previously the site of an RCMP checkpoint.

Coutts is the busiest port of entry for Alberta and Montana, seeing 800-1200 trucks pass through daily, and is critical to Alberta’s beef and meatpacking industry.  The anti-vaccine protest has prevented hundreds of truckers from transporting their cargos across the Canada-US border.

For the third straight day protestors block traffic at the Coutts border crossing, as they call for an end to the vaccine mandate. As @citytara reports, some truckers are stranded on both sides of the border. pic.twitter.com/BepkmKHDtx

Coutts Residents say those who wish to leave the town have to do so via highway 500, a secondary highway guarded by multiple RCMP checkpoints.

“There’s old ladies in town who haven’t had homecare in 4 days,” Cindy Clark, a town resident and owner of a local pottery studio, told PressProgress.

“The majority of the population is elderly. And they are timid,” Clark explained. “You going to tell little old Mildred who is 92 and her daughter who is in her 70s to drive through police checks? You’d have to show ID to at least 3 police checks to go into town and back.”

“There’s no grocery store, no service station, all of our facilities are in a town 18 kilometres north.”

Clark said the sudden presence of police and strangers has been a shock to the town.

“It’s just disconcerting to see so many police and so many strangers in a town with 200 people. We don’t see more than 200 cars in a year,” Clark said. “Now we have choppers flying over now and then.”

Locals say the blockade is causing significant disruption to the town. 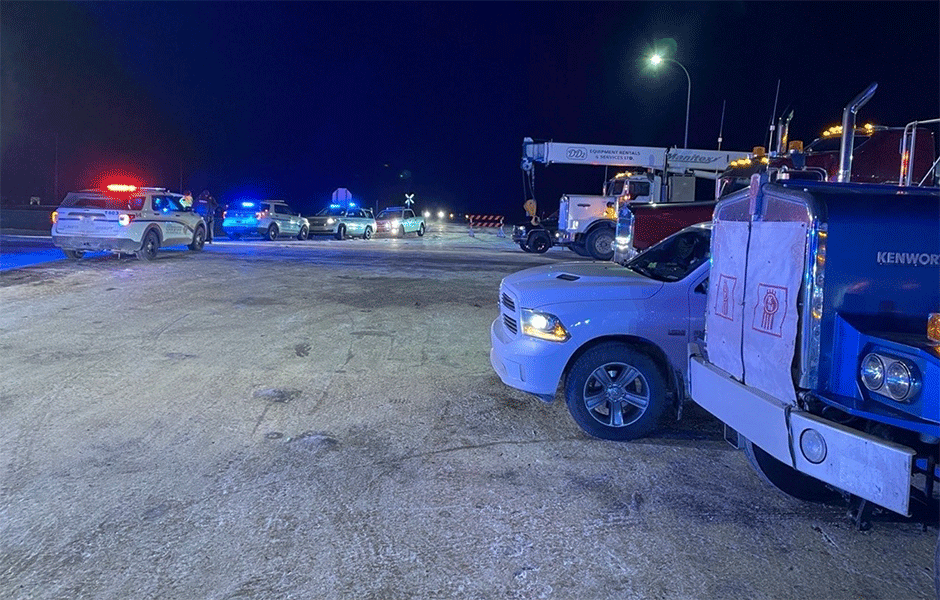 “RCMP check stops are everywhere,” resident Kelly Clark told PressProgress. “They’re on the gravel roads, on the 501, on the highway, they’re even along the border road.”

“The other day a lady I know went up to Milk River who hit all the check stops and had to show her ID three times. She was visiting the dentist.”

The blockade turned dangerous this week when the Milk River RCMP checkpoint on Highway 4 was overrun by tractors and trucks, as farmers from the surrounding communities joined in to protest vaccine mandates.

The removal of the vehicles blockading the highway is a hurdle, with many tow truck drivers and even towing companies supporting the protest.

“We support them 100%” Cari Hood with United Towing and Recovery Services out of Canmore told PressProgress.

“If it is an emergency situation, an accident, a livestock carrier, if there’s lives in danger we would most certainly go in and deal with that situation, but if the RCMP are asking us all to come in willy-nilly that’s not going to happen.”

Clark, who is the wife of Mayor Willett, said an individual did approach their home and began taking pictures, though she isn’t interested in “playing up” the incident.

“Things are emotionally charged. I was frightened, but we don’t want to escalate this situation,” Clark said. “They’re hurting a lot of people by not allowing commerce to flow, people are staying in.”

“It is a community of older people, and it is very nervous-making.”