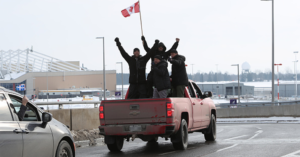 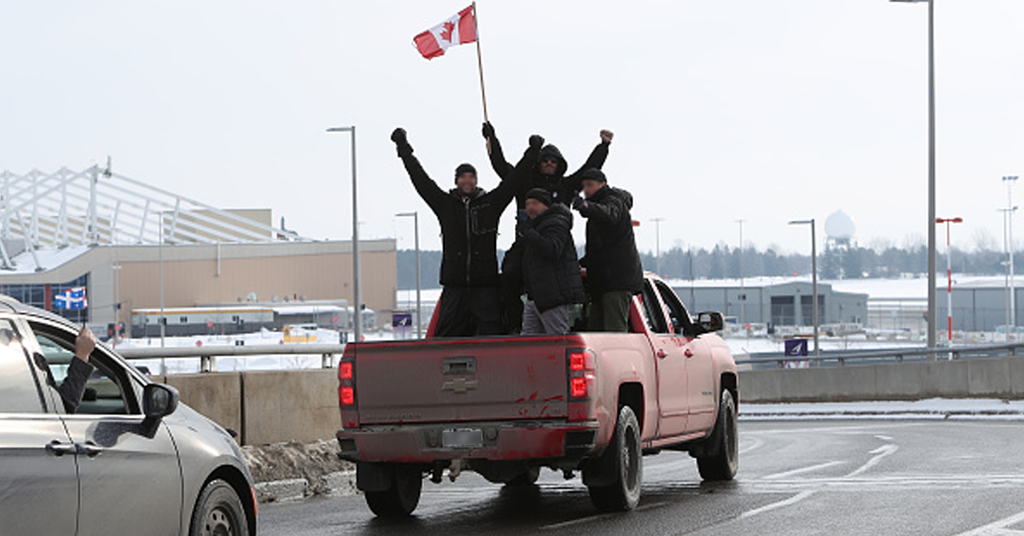 The Ottawa convoy occupation served as a breeding ground for “violent extremists” looking to recruit and radicalize convoy supporters, according to a newly disclosed internal intelligence report from a Canadian counterterrorism organization.

The threat assessment, prepared by Canada’s Integrated Terrorism Assessment Centre (ITAC), is marked “for official use only” and was obtained by PressProgress through access-to-information.

Dated February 17, 2022, one day before a massive police operation began clearing the streets of Ottawa, the internal report looked at “the connection between violent extremism and the ongoing convoy protest,” referencing threats targeting elected officials and classified intelligence on a threat targeting a federal building.

“We judge the convoy protests have provided an opportunity for ideologically motivated extremism (IMVE) movements to recruit and network with like-minded individuals,” the ITAC report states.

The threat assessment notes that recruitment could occur either in “closed online forums or discreetly between known associates,” adding that these “in-person and online networking opportunities could lead to radicalization and the potential for future coordination.”

ITAC, which is responsible for analyzing potential terrorist threats, indicated it was less worried about those directly participating in the convoy than it was by people online and sympathetic supporters quietly observing from the sidelines.

“The majority of online IMVE threats encouraging violent anti-government or anti-authority acts related to the protests appear to come from individuals who are not participating in the protests or blockade,” the report explains. “We judge that the primary threat of violence is from vulnerable individuals on the periphery of IMVE movements, influenced by online rhetoric.” 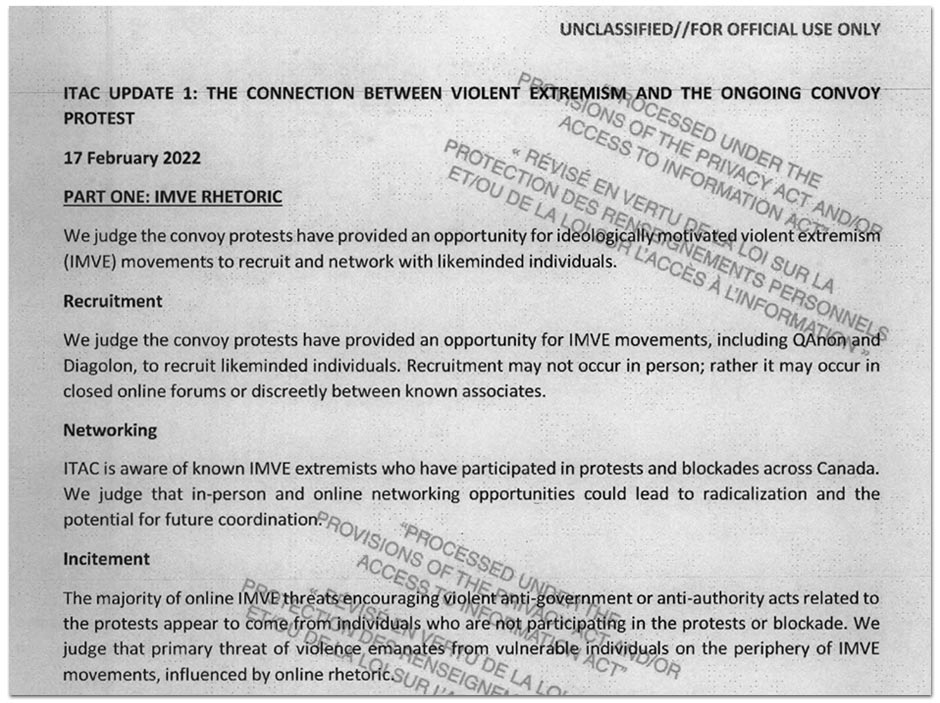 In a statement to PressProgress, the Canadian Security Intelligence Service said it could not comment on its methods or investigations, but said “ITAC develops threat assessments at various classification levels that are based on classified and open-source information.”

“These products, which are for official use only, are shared with both international and domestic partners, including law enforcement and provide senior-level decision makers with the latest and most detailed threat information, enabling them to assess the overall threat and risk level and develop mitigations where appropriate,” CSIS spokesperson Brandon Champagne said.

Stephanie Carvin, a Carleton University international affairs professor and a former CSIS intelligence analyst, said the ITAC threat assessment suggests there were “many IMVE motivated actors at the protests, not just a few.”

“The point about networking is, I think, pretty fundamental,” Carvin told PressProgress. “It would make sense for violent extremists in the protests to make connections to others with a view to engaging in radicalization.”

The Guardian, which obtained leaked intelligence assessments prepared by ITAC in late January, previously reported that the federal government and Ottawa Police were warned of the “likely” involvement of extremists in the convoy and that there was potential for “lone actor attackers to conduct a terrorism attack.”

The February 17 ITAC report shows the organization was, in fact, “aware of known IMVE extremists who have participated in protests and blockades across Canada.”

“Violent extremists who support or are attending the protests include a range of IMVE adherents including white nationalists, accelerationists, separatists, radical libertarians, conspiracy theorists and others who justify violence to achieve ideological objectives.”

ITAC was also particularly concerned about individuals affiliated with “QAnon and Diagolon,” noting that the presence of “key individuals” and “influencers” on the ground in Ottawa was “indicative of a much larger attendance at convoy protests by IMVE adherents over recent weeks.” 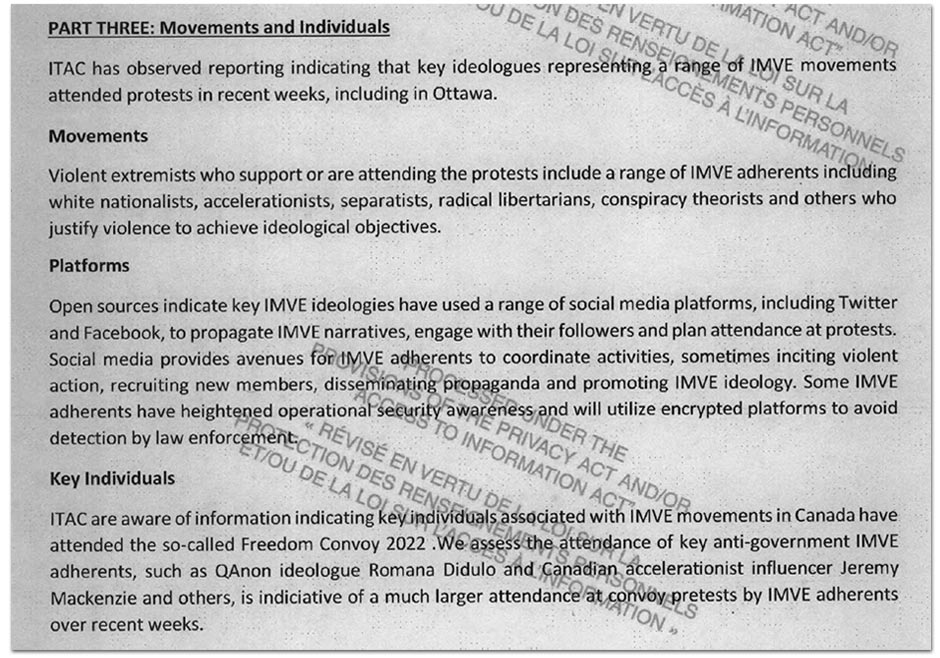 Carvin notes that the report’s section focusing on “incitement” sheds light on an “interesting dynamic” between the violent extremists on the ground and online.

“The assessment is that the calls for violence were not from people at the protest, but it could influence ‘vulnerable’ people there,” Carvin said. “In this sense, this report is suggesting that violent extremists were mostly using the protests to recruit, but online IMVE supporters were using it to encourage violence.”

The intelligence report also flagged “threats to elected officials and symbols of government,” warning a “lone actor or small group of individuals inspired by IMVE could attempt to seize the opportunity and conduct an opportunistic attack against a political figure or symbol of government / authority.”

The report also warns about attacks on soft targets, including one reference to classified reports about a previously undisclosed threat targeting a government building: “ITAC has observed recent classified reporting indicating that an individual espousing IMVE ideologies threatened to attack a federal building.”

While an “attack against a legislature, including Parliament Hill, is unlikely given a lack of coordination among protesters and security measures in place,” the report cautioned that “an attack at a less secure location such as a regional federal government building is possible.” 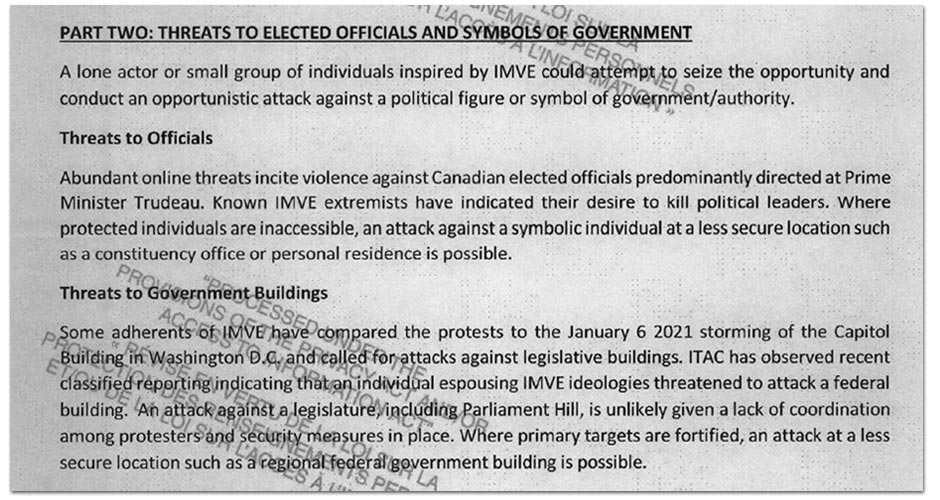 Elizabeth Simons, Deputy Director of the Canadian Anti-Hate Network, said the report’s findings do not surprise her, noting her organization extensively documented ties between the convoy and far-right extremist groups at the time.

“White nationalists, accelerationists, separatists, conspiracy theorists, etc. almost uniformly saw the convoy as ‘the people’ rejecting modern Canadian society, making it valuable to them even if they didn’t believe in or agree with the goals or ideas during the convoy on the surface,” Simons told PressProgress. “Many saw it as an opportunity to network, and movement build, and that is exactly what we saw.”

“Some of the end goals were different – to white nationalists, it is the rejection of a so-called zionist occupied government, or ZOG, to accelerationists it was the hastening of society further destabilizing, and to separatists it was a moment to be seized for further division.”

“All of these networks and movements carry a potential for violence,” Simons said. “To have them in one place for a prolonged period of time is a huge concern.”