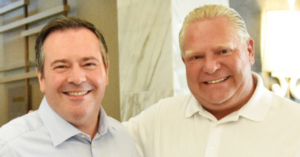 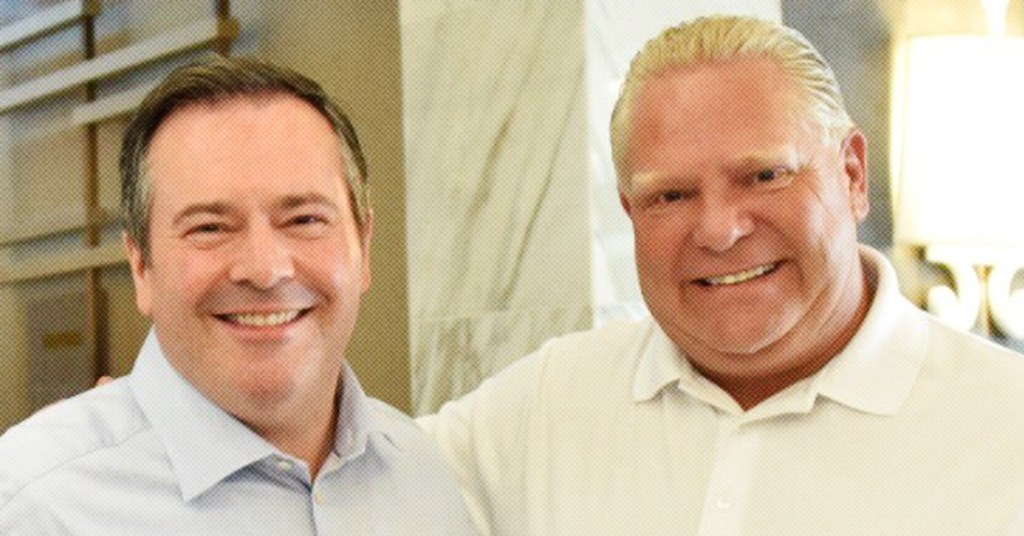 Not only that, Kenney and Ford’s do-nothing approach to climate change would cost Canadians at least $20 billion every year – very fiscally responsible, right?

If you haven’t heard, the Premier of Ontario is joining Alberta’s opposition leader in a Calgary ballroom Friday night for their hyped-up “scrap the carbon tax” rally.

Except Kenney and Ford have made it clear their rally isn’t just about removing the price on carbon pollution – they want to launch a movement to rollback the clock on decades of work fighting climate change. 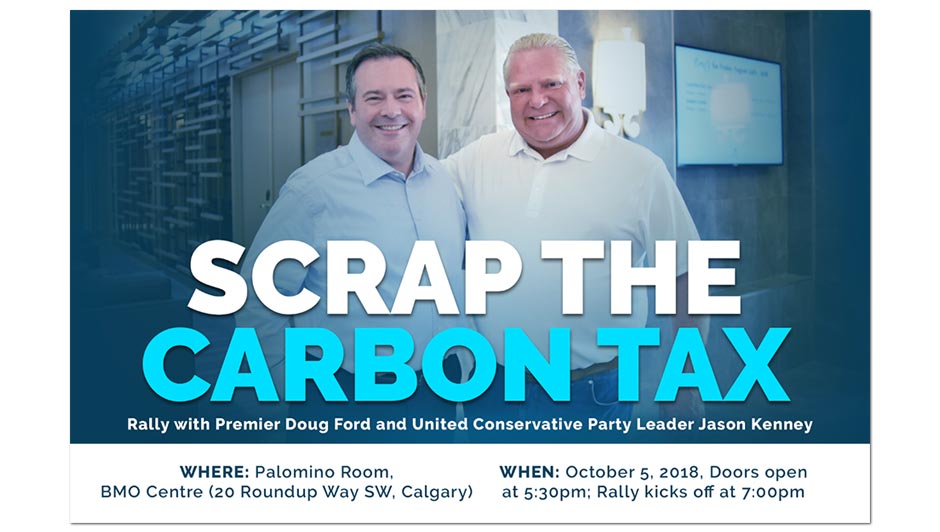 Ford recently announced he’s repealing Ontario’s cap-and-trade program, which he called the “absolute worst” for the economy. Kenney says he’d repeal Alberta’s carbon tax if he can win next year’s provincial election – he calls the levy, which is actually  supported by Alberta’s oil industry, an “expensive piece of political theatre.”

Neither Kenney nor Ford offer any alternative ideas to addressing climate change – in fact, it’s unclear either of them even believe in climate science.

Kenney thinks carbon emissions are not a form of pollution while Ford has avoided sharing his thoughts on the issue throughout his political career.

Although Ford and Kenney claim scrapping plans to curb climate change are a step towards “fiscal responsibility,” neither leader seems to realize that doing nothing can be much more expensive than doing something.

A 2017 Bank of Canada report found that climate change and extreme weather will cost the Canadian economy more than $20 billion per year by 2050 unless provinces reduce their carbon footprints.

Other studies show extreme weather is already costing Canada’s federal and provincial governments more than $2 billion per year as it stands.

Here are a few reasons why costs associated with climate change are so high:

According to the Conference Board of Canada, the annual liabilities of the Disaster Financial Assistance Arrangements (DFAA) managed by provincial and federal governments rose from $100-million annually 20 years ago to $2 billion in 2013–14.

Climate change is destroying crops and damaging the economy

This year saw hotter and drier summers than normal in western and eastern Canada while some regions in southern Alberta experienced 50 year lows in rainfall.

Drought researchers say summertime drought conditions for farmers across the prairies are becoming the “new normal.” A 2015 report commissioned by Bloomberg News found that hotter summers are drastically affecting the productivity of the agricultural sector. In the last 3 years, dryness is estimated to have reduced wheat and canola yields to 8 year lows.

In March 2012, a heatwave in Ontario caused fruit trees to blossom five weeks earlier than usual, resulting in the loss of 80% of apple blossoms. The lost stock cost Ontarian farmers more than $100 million.

Public infrastructure needs to be upgraded to withstand climate change

According to the Conference Board, many public infrastructure works – like roads, bridges, sewers, and drainage systems – will need to be reinforced or rebuilt to adapt to flooding and other extreme weather caused by climate change.

In light of all these growing expenses, what are these self-styled aficionados of “fiscal responsibility” saying about climate change?

• Kenney claimed putting a cost on carbon pollution is unnecessary because CO2 emissions are not pollution: “Co2 is not pollution. Life would cease to exist without it. Our forests breathe Co2,” Kenney said.

• Kenney was filmed telling a climate denier: “the climate’s been changing since the beginning of time.”

• Kenney has hired not one, but two different campaign managers who deny the existence of climate change – John Weissenberger claims climate change is caused by sunshine while Randy Kerr, who is now a UCP candidate, called climate change a “hoax” and a “media conspiracy.”

• Ford has no plan to deal with climate change – his platform for the “environment” is costed at $125 million per year with most of the money going towards cleaning up litter and “hiring more conservation officers” at provincial parks.

• Ford calls carbon pricing, which is supported by conservative economists and leaders like Preston Manning and Stephen Harper, a “government cash grab.”