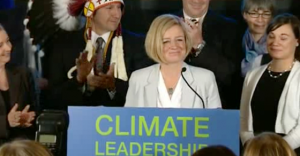 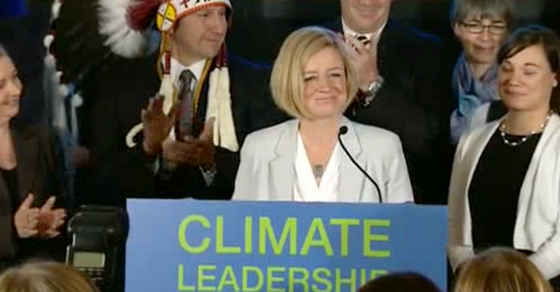 Alberta just announced a major new strategy to fight climate change. Guess who has their back?

People from a wide range of backgrounds are lining up and agreeing it's good as good for business as it is for the environment. Here's what key groups are saying.

“This is the day we stop denying there is an issue,” Notley said. “Climate change is real, it is caused by human activity and it requires an effective response.”

“We are going to put capital to work investing in new technologies, better efficiency and new job creating investments in green infrastructure and we are going to write a made-in-Alberta policy that works for our province and our industries and keeps our capital here in Alberta for our citizens.”

What else? People from a wide range of backgrounds are lining up and agreeing it’s good as good for business as it is for the environment.

Here’s what key groups are saying:

Yep – the oil industry supports it. Speaking at the announcement on behalf of the oil and gas industry, Edwards said the plan will “enhance Alberta’s global reputation” as a “climate leader”:

“Today’s announcement is a significant step forward for Alberta and for the industry … There are ambitious announcements being made today and targets set forward for the industry at a challenging time for the oil and gas industry. But the framework announced today will allow the ongoing innovation technology investment and growth in the oil and gas industry at the same time we are looking to reduce our overall carbon emissions. In this way, we will do our part to address climate change while protecting jobs and industry competitiveness in Alberta.”

“Canadian Natural Resources Limited, Cenovus Energy Inc., Shell Canada Limited and Suncor Energy Inc., support the Government of Alberta’s climate plan related to the oil and natural gas industry, which includes a carbon pricing regime coupled with an overall emissions limit for the oil sands. These measures provide predictability and certainty and will help ensure that producers can responsibly develop and grow this significant Canadian resource while also addressing global concerns about climate change … By demonstrating that Alberta is willing to lead the way with an ambitious climate plan, the province can become a preferred source for oil and create sustained wealth and jobs for future generations of Albertans and Canadians.”

Canadian oil on the path to becoming the most environmentally and economically competitive in the world – Lorraine Mitchelmore. #ABclimate

Speaking at the announcement, Executive Director Ed Whittingham said the strategy will make major progress in the shift to renewable energy:

“Today Alberta takes its rightful place as a leader on the world stage. Your made in Alberta climate leadership plan positions our province to be a global leader on climate change. Phasing out coal-fired electricity and ensuring renewable electricity is a big part of the replacement generation is perhaps the most important thing the world can do to avoid dangerous climate change. Your plan does that with its 2030 goal while providing for the transition of our provinces coal workers and their home communities and ensuring stability of prices to consumers and businesses.”

“As Premier Notley said today, we expect today’s announcement to further enhance the reputation of our sector and improve our province’s environmental credibility as we seek to expand market access nationally and internationally. As well, the province’s climate strategy may allow our sector to invest more aggressively in technologies to further reduce per barrel emissions in our sector and do our part to tackle climate change. That’s what the public expects, and that’s’ what we expect of ourselves.”

Science and policy manager Ian Bruce said the pledge to phase out coal power will make a massive dent in the province’s carbon emissions:

“Coal power in Alberta puts nearly as much carbon into the air as all oilsands operations, so the impact of phasing out these massively polluting power plants and shifting to zero-emission power sources is a landmark step that will cut emissions and save lives.”

The former U.S. Vice President added his name to the list of supporters:

“Today’s announcement by Premier Notley … represents an inspiring addition to the legacy of leadership and forward thinking action by Canadian provinces to speed our transition to a low carbon economy. This is also another powerful signal — well-timed on the eve of the Paris negotiations — that humanity is beginning to win our struggle to solve the climate crisis.”

“The clean energy sector is creating new jobs faster than any other sector in the country. Setting an economy-wide carbon price and targets for renewable energy generation sends a powerful signal to the market that will drive long-term investment in Alberta’s renewable energy resources.”

Executive Director Rick Smith described the announcement as an 11 on the “public policy Richter scale”:

“In one fell swoop today, Premier Rachel Notley’s decisive and visionary leadership is increasing the diversity and stability of the Alberta  – and Canadian — economies and repositioning them to best advantage for the future. Today’s announcement will undoubtedly ensure that Alberta’s interests are well-served at next week’s UN climate change summit in Paris.”