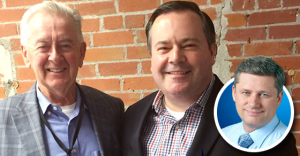 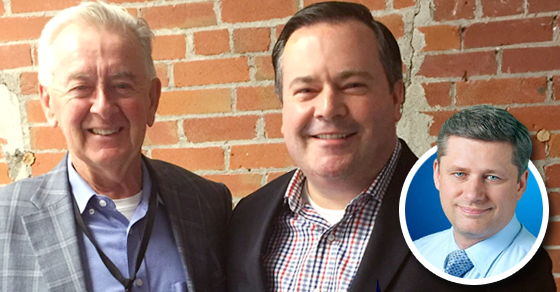 According to Jason Kenney’s logic, Stephen Harper and Preston Manning are socialists too

In the bizarro right-wing fantasy world Jason Kenney is often spotted living in, two of the most conservative political leaders in Canadian history would appear to be socialists.

How many people can brag about being more right-wing than Stephen Harper and Preston Manning?

Well, in the bizarro right-wing fantasy world Jason Kenney is often spotted living in, two of the most conservative political leaders in Canadian history would appear to be the “perfect illustration” of socialism.

Here’s a sponsored message Kenney was promoting on Facebook last weekend, suggesting he thinks the very concept of carbon prices is “the perfect illustration of socialist ideology”:

Well, if that’s “the perfect illustration” of socialism, here’s what else is true:

Stephen Harper is a socialist

Although he’s claimed carbon pricing plans from other parties are only good for “killing jobs and shutting down industries,” the former Prime Minister and Team Kenney supporter isn’t actually opposed to the very concept of carbon prices altogether.

During a December 2014 interview with CBC News, Harper softened his tone and told Peter Mansbridge he’s open to the idea of putting a price on carbon emissions.

Pointing to Alberta’s carbon pricing system as a model, Harper said he might even be willing to take Alberta’s example and “go broader” (he didn’t “go broader,” of course, but that’s a whole other story):

Preston Manning is a socialist

Meanwhile, the founder of the Manning Centre – whose operatives have been spotted orchestrating Alberta’s unite-the-right efforts – says a carbon price is the perfect illustration of a “good idea”!

Manning, who also serves as an advisor to the Ecofiscal Commission, says he “wholeheartedly” supports the idea of carbon pricing:

Not only that, but Manning suggests negligence towards the environment is at odds with the true meaning of conservatism:

“The words ‘conservative’ and ‘conservation’ come from the same root. Living within your means – something that fiscal conservatives believe in – is actually an ecological concept.”

And earth to Jason Kenney: most players in Alberta’s oil sector recognize the value in carbon pricing.

When the Government of Alberta announced their Climate Leadership Plan last year, even oil companies lined up in support of Alberta’s new carbon pricing plan:

As the dyed-in-the-wool socialists at the Canadian Association of Petroleum Producers explained, the Climate Leadership Plan’s steps to reduce carbon emissions “enhance the reputation” of Alberta’s oil sector and “improve our province’s environmental credibility.”

And that’s true: during his recent address to parliament, President Barack Obama pointed to Alberta as an example to the United States and to the world.

Oh, and the wider business community doesn’t seem too wound-up about this “socialist” idea either:

If Kenney seems out-of-touch and far outside where mainstream thinking is on this issue, we shouldn’t be too surprised.

After all, a few months ago Kenney denied that carbon dioxide is a source of pollution:

But according to scientists, carbon dioxide is, in fact,”the primary greenhouse gas emitted through human activities,” particularly “the combustion of fossil fuels.”

“While CO2 emissions come from a variety of natural sources,” the US government’s Environmental Protection Agency points out “human-related emissions are responsible for the increase that has occurred in the atmosphere since the industrial revolution.”

Oh, and by the way, remember the 2008 federal election?

Don’t tell Kenney, but that cap-and-trade promise in the Conservative platform he ran under is actually a form of carbon pricing too!