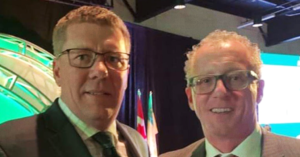 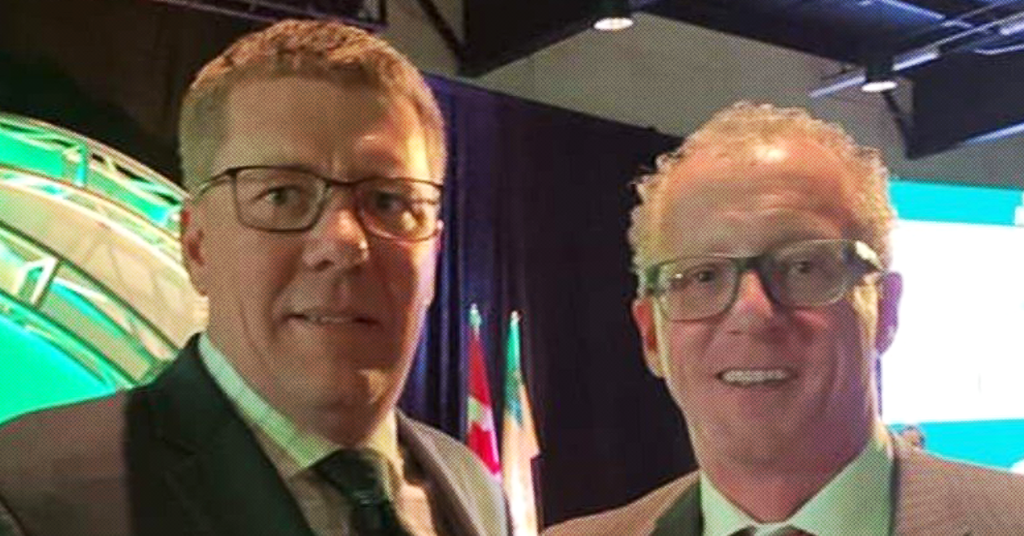 A candidate for Scott Moe’s Saskatchewan Party has deleted Facebook posts amid questions about his social media activity relating to COVID-19 and QAnon conspiracy theories.

Daryl Cooper, who was acclaimed the Sask Party candidate in Saskatoon- Eastview in June 2019, made some of the questionable postings only in recent months.

In May 2020, Cooper shared a lengthy post on his campaign’s official Facebook page titled “the origin of COVID-19.”

The post runs through several narratives popular with conspiracy theorists, including the idea that COVID-19 was caused by “Wuhan was the first city in the world to be blanketed by 5G technology” — or possibly “Galactic Cosmic Rays,” 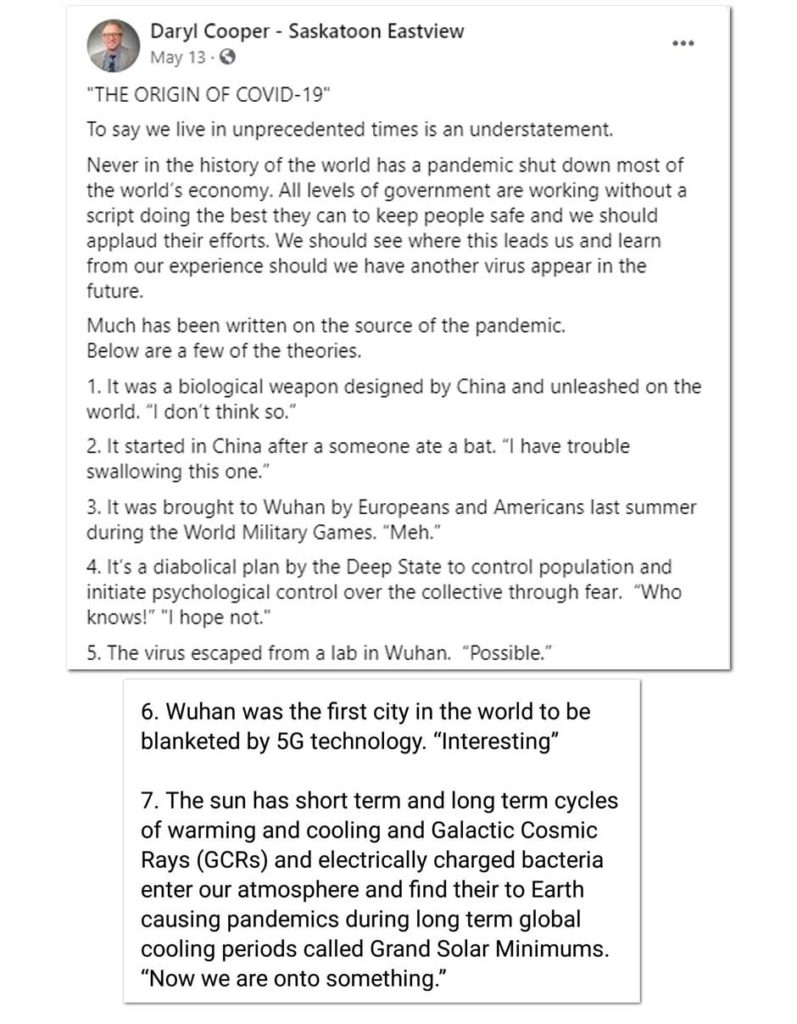 “It is the last two other theories that I found interesting.

With regards to 5G, author and human immune specialist Dr. Thomas Cowan explained in a 10 minute video that has been pulled off of YouTube, too bad because this man is really good.

He asserts that every pandemic in the past 150 years can be traced to humans introducing new radioactive waves onto the planet. Radio in 1917 – Spanish flu 1918. Satellites into orbit 1967-Hong Kong flu 1968 and then of course 5G.

While I love the work and passion Dr. Cowan exhibits for human health his concept does not explain pandemics prior to the 20th century.

That brings me to a theory that I am surprised, and frankly disappointed with the fact that the scientific community has not mentioned, and that is the study of astrobiology. I stumbled across this work published in June of 2017.

The three-page paper makes a strong case in blaming the sun, or lack thereof, for all pandemics.  It is a quick read and easy to understand. Trust me, it makes sense, even I caught on.

It is fascinating theory that I will expand on in my next post.” 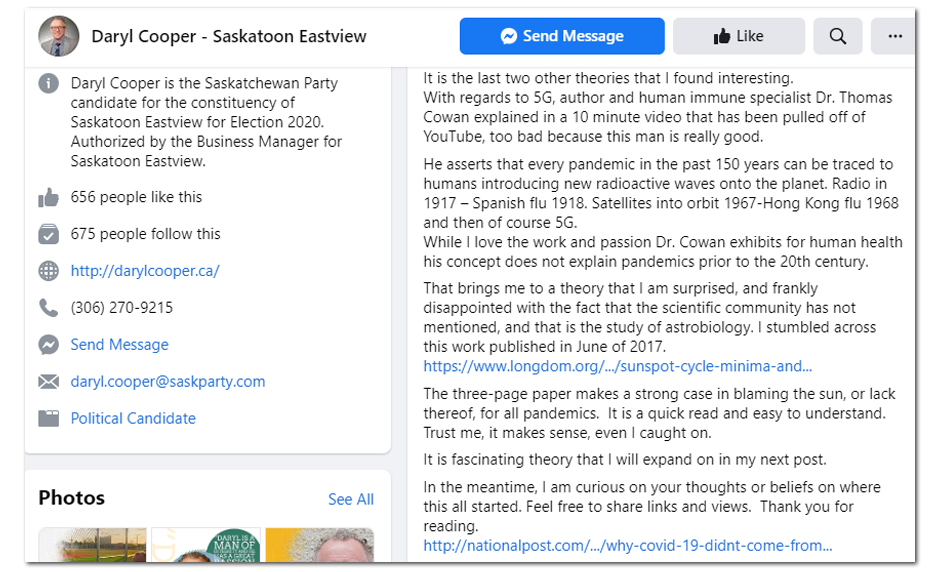 Cooper did not respond to requests for comment from PressProgress.

On Friday, CBC News reported on a different post in which Cooper suggested that pandemics could be caused by sunspots. In a statement released through the Saskatchewan Party, Cooper said:

“In May, I wrote a Facebook post sharing alternative theories on pandemics. Clearly this theory is not supported by science and is not credible. I have now deleted this post.”

In June 2020, Cooper’s official Sask Party Twitter account liked a tweet from  Twitter user “Tdawg0925” expressing excitement that her “two ‘next door’ neighbours are not only supporters of (US President Donald Trump) but also Q followers!”

Another tweet liked by Cooper refers to Trump as the “Big Kahuna.”

The tweet claims to have discovered a coded message by looking at the “correlation between Q posts and POTUS tweets.” 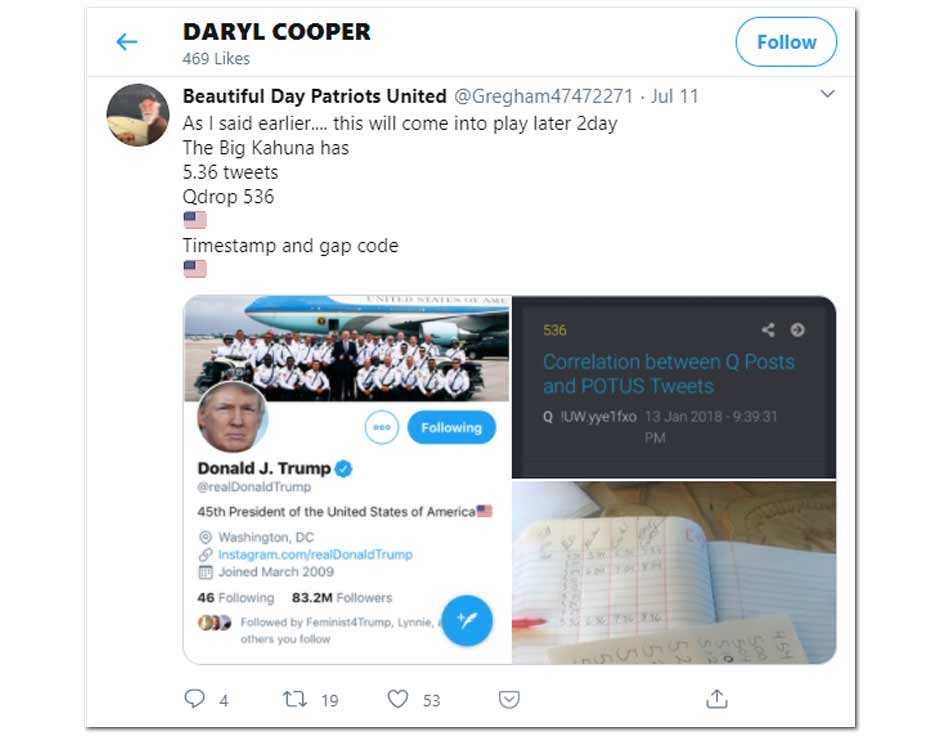 Yet another tweet from July that was liked by the Sask Party candidate was posted by an account called “Save our Children” that tweets extensively about QAnon and Pizzagate.

“Satan is ruling the world,” the tweet states. “His time is 1,000 year reign his time is almost up and remember as soon as there is a worldwide announcement claiming world peace and security is the start of the great tribulation.”

The Anti-Racist Canada Collective, a group that monitors Canadian hate groups and conspiracy theories online, says the conspiracy has “grown into a religion” and has “inspired numerous violent crimes, from murder to kidnapping.”

“QAnon adherents won’t even consider outsider opinions or information,” ARC Collective explained. “To them, they’re the only ones who are ‘awake’ and therefore the only people who know true reality.

“At the core of QAnon is a barely reworked retelling of the Protocols of the Elders of Zion, replacing blood libel with theories of globalist elites harvesting blood from children,” they added.

“The fact that QAnon has grown in Canada (to the point where we are 3rd highest in QAnon content posted online) and infiltrated our democratic institutions is hugely alarming.”

At a campaign event in Moose Jaw late Friday, Saskatchewan Party leader Scott Moe distanced himself from his candidate’s views on sunspots but stopped short of taking further action against the candidate. 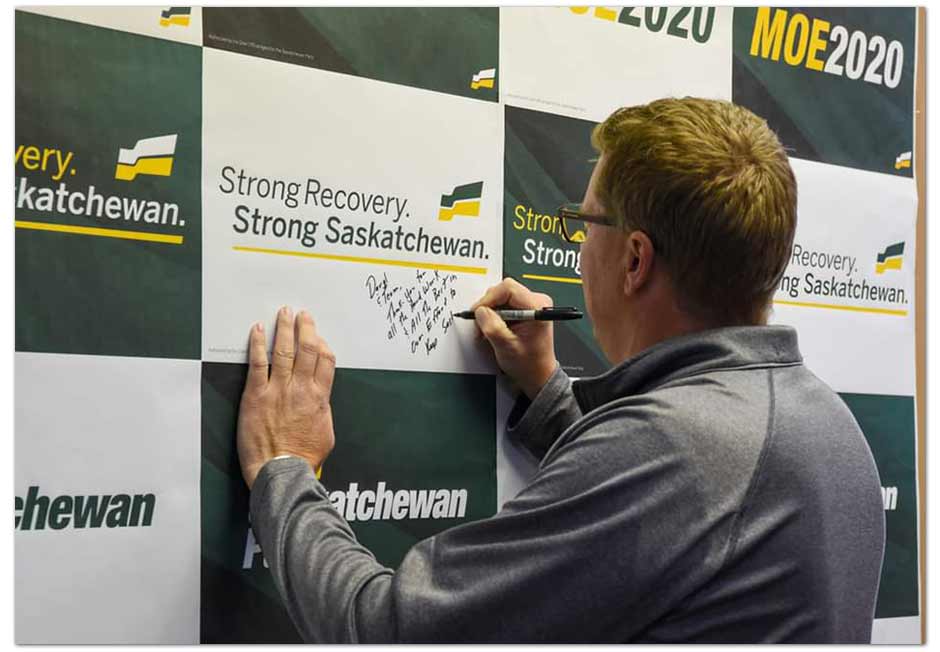 ARC Collective said it is has been tracking a sharp rise in conspiracies related to the pandemic in recent months.

“The conspiracy theories surrounding COVID-19 and the pandemic in general are extremely harmful, they reduce a very real public health crisis to the perceived actions of the ‘elites’,” ARC Collective told PressProgress.

“These theories run the gamut,” they added. “All of this serves to cause people to not listen to expert health advice and puts everyone around them at risk.”

Update: In response to the social media activity that was first reported in this story, the Saskatchewan Party announced on Saturday that Daryl Cooper had resigned as the party’s candidate for Saskatoon–Eastview.

According to a statement the party provided to CBC News:

“Today, Daryl Cooper offered his resignation to the Executive Director of the Saskatchewan Party,” a statement from the Sask. Party said.

The Sask Party did not respond to inquiries from PressProgress about Cooper’s status as a candidate.