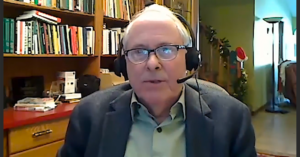 ‘This is the worst case of fake news in Canadian history’

Tom Flanagan, a former senior adviser to Stephen Harper and current senior fellow at the Fraser Institute, says he thinks news reports about over a thousand unmarked graves at the sites of former residential schools is “fake news.”

“This is the worst case of fake news in Canadian history,” Flanagan said this week during an interview with a far-right website, claiming “numerous good reports” about residential schools were being discounted due to “wokeism.”

In 2015, the Truth and Reconciliation Commission estimated that between 4,000 and 6,000 children died in residential schools. Causes of death included physical abuse, malnutrition, disease and neglect. Others died by suicide, or by trying to escape the schools.

But in an interview this week with the far-right website True North, Flanagan cast doubt on those reports.

Asked by True North’s Candice Malcolm for his “opinion” on the “big bombshell news story that we had last year about the apparent discovery of unmarked graves at residential schools, Flanagan left no room for ambiguity about his views.

“Well Candice, this is probably the worst case of fake news that I have ever seen in Canada,” Flanagan said.

“There is actually nothing to this story about mass graves or unmarked graves,” Flanagan added. “Until we get some positive evidence the story should be completely discounted.”

“Of course people are using, manipulating it for particular political purposes, but I just have to repeat: Until we see some positive evidence, this is the worst case of fake news in Canadian history.”

Flanagan, whom the right-wing Fraser Institute think tank presents as an expert on “aboriginal policy,” recently published a report on federal spending on Indigenous programs, including a critical look at settlements paid out to residential school survivors.

In the interview, Flanagan acknowledged residential schools “had drawbacks,” but he also echoed statements he has made previously defending the utility of residential schools as a “pragmatic response to the realities of trying to educate a widely-distributed population”:

“I haven’t heard anyone say what would be a practical alternative to Residential Schools. Would you say no school at all? If we hadn’t set up any schools Canada would be condemned today for leaving this population in ignorance.”

Regarding the indisputable evidence of sexual and physical abuse at residential schools, Flanagan suggested the news has not taken a balanced approach – something he blames on “wokeism.”

“I think any honest approach would try to draw the balance,” Flanagan told True North. “What has happened is people with strong ideological convictions, what today is often called ‘wokeism’, have taken the bad reports and woven them into their narrative while discounting the numerous good reports.”

Flanagan elaborated on his thoughts:

“The historical record is mixed as it is for all human institutions. You know, if I can draw a comparison for a second, if you look at the literature surrounding boarding schools in England at the time which were used for the children of elite parents, many students love their schools. Others report horrifying reports of physical and sexual abuse at these schools. So, for residential schools in Canada, you’ll also find a mixed set of reports. ”

In a statement to PressProgress, Flanagan said he “absolutely” stands behind his statement that news reports about the discovery of unmarked graves at residential schools is “fake news.”

Asked whether he disputes the Truth and Reconciliation Commission’s findings that children died as a result of abuse in residential schools, Flanagan said: “I dispute this as a generalization.”

“I would want to see evidence about individual deaths,” Flanagan told PressProgress. “Ask me about specific cases and show me the evidence.”

“The main cause of death was disease,” Flanagan said. “Children often came to school already infected with TB or other serious diseases.”

“Of course, there had to be a program of acculturation so native people could participate in the new society. They had to learn literacy and agricultural, commercial and industrial job skills so they could support themselves in a new kind of economy,” Flanagan said.

“It’s hard to see how that could have been done except in schools.”

Flanagan came to prominence as a right-wing academic in 1979 for his revisionist history of Louis Riel – painting him as a megalomaniac and denying that the Métis people have any right to compensation for past abuse by the federal government.

Instead, he argued: “In order to become self-supporting and get beyond the social pathologies that are ruining their communities, aboriginal people need to acquire the skills and attitudes that bring success in a liberal society, political democracy, and market economy. Call it assimilation, call it integration, call it adaptation, call it whatever you want: it has to happen.”

Since 2002, he has authored dozens of reports on Indigenous issues for the right-wing Fraser Institute.

Despite this, the federal government continues to increase federal spending on Indigenous programs without material reforms. Check out the data here: https://t.co/Fw6a5nEJNg pic.twitter.com/ZI01pE5SOZ

A few of those titles include:

The Fraser Institute did not respond to requests for comment from PressProgress about whether it agrees with its senior fellow’s opinion that residential school graves are “fake news.”